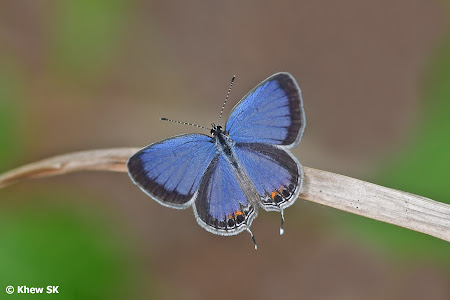 The year moves into the peak of summer and the heatwave that is spreading across the globe is a constant reminder of climate change and global warming. Again, reports of unprecedented high temperatures in many countries are in the news - from Europe to Japan. Back in Singapore, it has been quite a few weeks since we had ample rainfall, and we can see wilting plants, dried undergrown and brown grass patches all over the island. 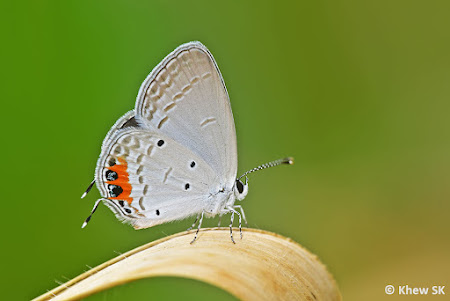 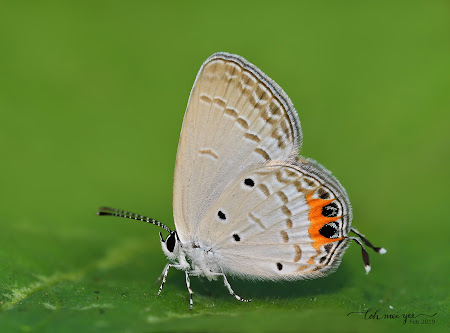 The National Environment Agency's Meteorological Service Singapore said earlier this month that it forecasts drier-than-normal weather conditions here and in the surrounding region in the coming weeks, following a record dry July. Drier weather can be expected from August to October this year. This followed two bush fires in Singapore recently where parch-dry wastelands are vulnerable to anything that sparks the dried grasses and twigs to start a fire going. 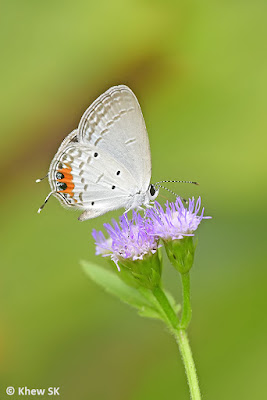 Always in the news, the continuing trade war between China and the US, and how it is going to impact the global economy and change lives. More countries seem to be jumping on to the bandwagon to start their own trade disputes. However, the impact of the trade war between the two economic giants will be felt throughout the world and little Singapore will certainly not be spared. Already, local trade reports point to a technical recession in the coming quarter and a possibility of a worse outlook ahead in 2020. 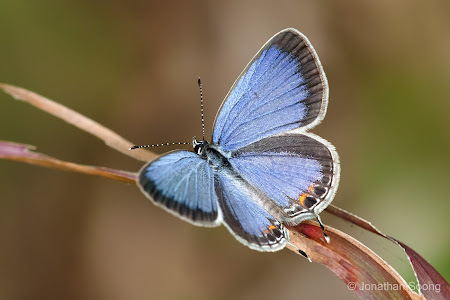 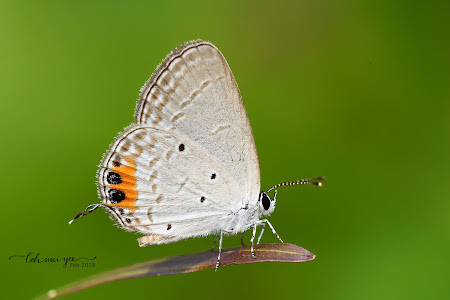 And then the Hong Kong protests. It is almost impossible to read news - whether online or in hardcopy print, without some mention about the civil unrest in Hong Kong. It is amazing to see how the citizenry, when pushed to a corner, can retaliate in a way that may almost irreversibly affect a country's stability. Singaporeans reflect over what is happening in Hong Kong, and many say that it would/could never happen here because of different circumstances and political outcomes. 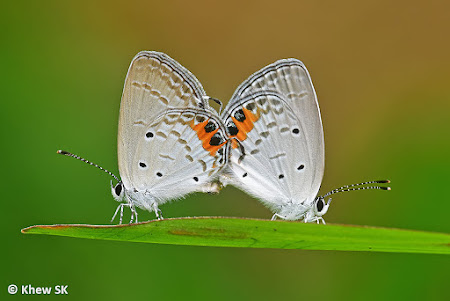 A mating pair of Indian Cupids

The hot and dry weather in Singapore seemed to have some impact on our butterfly activity. Other than very dry undergrowth that affects plants in general - the lifeline of butterflies, activity across the island has only reduced somewhat. Curiously, certain species that have not appeared for quite some time have suddenly reappeared, whilst some trees reacted to the harsh weather by flowering and attracting butterflies to come out from their forest hiding places. 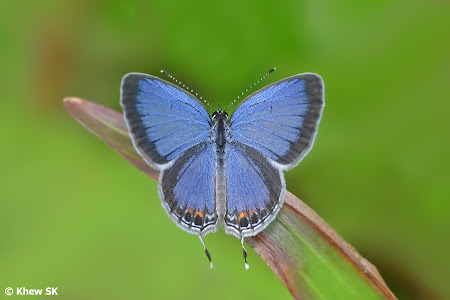 A pristine male Indian Cupid with its wings opened partially

Our August Butterfly of the Month is the diminutive and rare Indian Cupid (Everes lacturnus riley). With a wingspan of only about 20-25mm from wingtip to wingtip, this small butterfly frequents open grassy areas in sub-urban wastelands in Singapore. It was first observed in various areas on Pulau Ubin and Pulau Tekong, but then appeared in wastelands at Punggol and parts of Central Catchment along the forest edges. 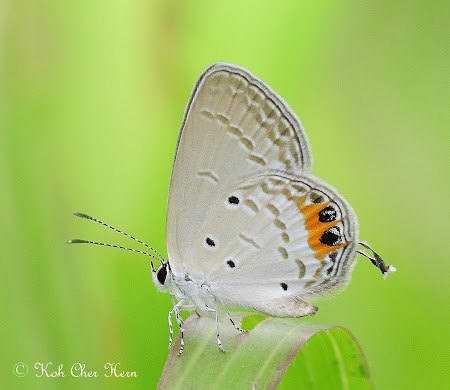 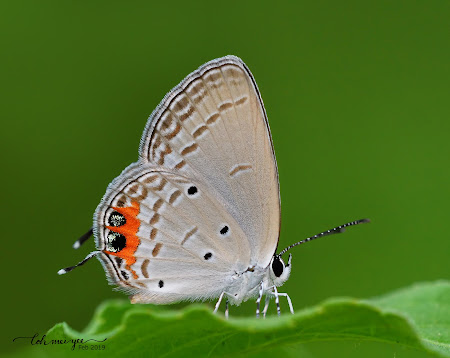 The Indian Cupid (or referred to as the Tailed Cupid in some literature) is the only representative of the genus Everes in Singapore. The male butterfly is purple-blue on its uppersides, with narrow black borders on both wings. The female is a drab brown above with a pair of orange-crowned spots at the tornal area of the hindwings. 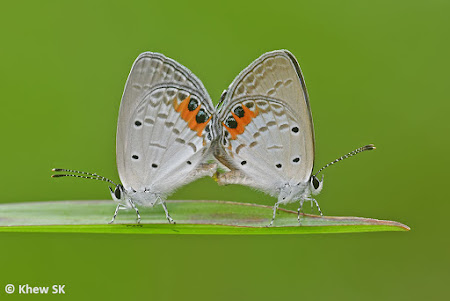 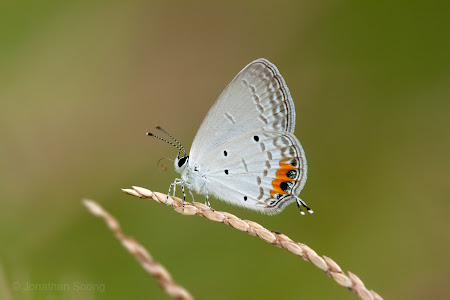 The ground colour of the underside is a pale grey, marked with the usual Polyommatinae spots and streaks. The pair of large orange-crowned black spots at the tornal area of the hindwing helps to distinguish this species from several other lookalikes in Singapore e.g. the Gram Blue. The pair of long filamentous white tipped tails at vein 2 of the hindwing also helps to separate the Indian Cupid from other similar species. 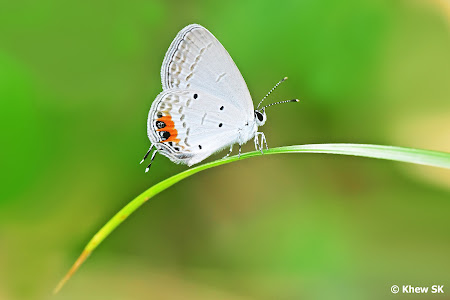 The Indian Cupid has a weak erratic flight and typically flies low amongst shrubbery. The butterfly can often be found in the vicinity of its caterpillar host plant, Desmodium sp. that thrives in newly cleared roadside tables and wastelands. When active, it is skittish and not easy to approach for a good shot. However, after some time of flying restlessly, it rests with its wings upright on grass blades or on the tops of leaves. 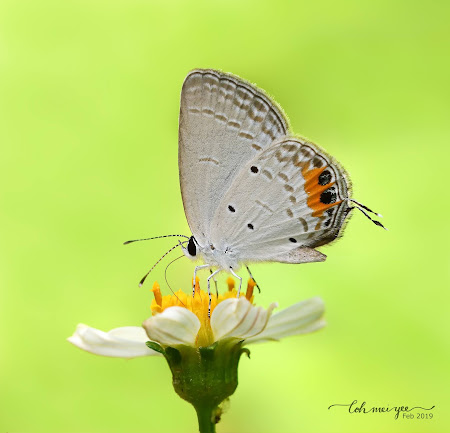 Being a small butterfly, it can be overlooked, or confused with other lookalike Lycaenidae like the Nacaduba, Prosotas or Euchrysops. Its flight characteristic is similar, hence any small butterfly fluttering erratically amongst low bushes and grassy areas should be given a second look to ascertain its identity. Where it occurs, there are often sightings of more than just one individual. However, it can disappear from a location for years, before re-appearing again elsewhere.

Posted by Commander at 7:50 PM 0 comments