Life History of the Colonel 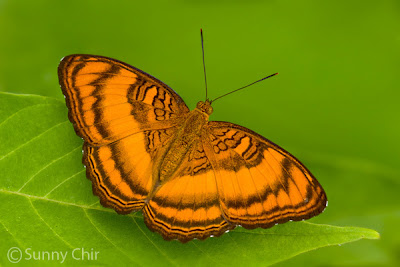 Physical Description of Adult Butterfly:
The adult is structurally close to the Athyma spp., with robust bodies and broad wings, but with the key difference of having the forewing cell slenderly closed instead of being open. Cells on both forewing and hindwing are short, roughly about one-third of the total length from wing base to wing margin. The wings are orange in base color. Above, the markings have dark brown shading in the basal halves of both wings. Each wing has a blackish brown post-discal band and three dark lines in the marginal areas. These post-discal and sub-marginal ands are broader and darker in the female. Beneath, the markings on the wings are almost identical to those above, with lesser brown shading in the basal area. 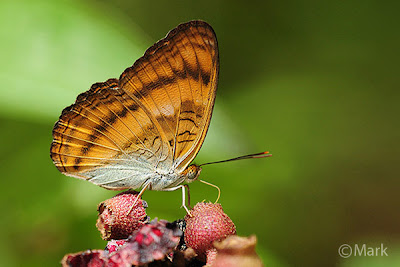 A Colonel feasting on the Singapore Rhododendron in a wasteland. 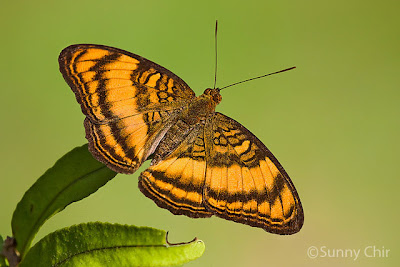 A Colonel sunbathing on a perch in the nature reserve. 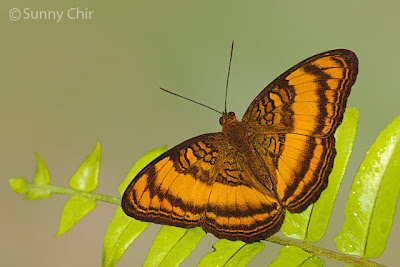 Another sunbathing Colonel in the nature reserve.

Field Observations of Butterfly Behaviour:
This species is uncommon in Singapore. Sightings of the fast flying adults have been confined to several patches of clearings in the Central Catchment Nature Reserves, and several wastelands in the western and north-western parts of Singapore. Individuals have been sighted visiting flowering plants in the wastelands and forest clearings,

Early Stages:
Thus far, only one species of Uncaria growing in the Central Catchment Nature Reserves is known to be utilized by the Colonel locally. Early stages of the Colonel also adopt the same feeding and frass-management routines as described for the Commander and Athyma species in earlier blog articles. Another plant, Nauclea subdita (Rubiaceae), has been recorded as the host plant in Kuala Lumpur, Malaysia, by an avid ButterflyCircle member, LC Goh. 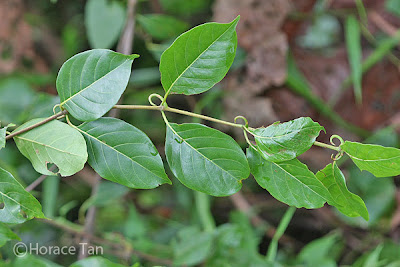 The eggs of the Colonel are laid singly at the tip of a leaf on the host plant. The eggs are somewhat globular in shape, with surface marked with hexagonal pits and bearing short spines at pit corners, giving them the appearance of minute sea-urchins. Each egg has a diameter of about 1mm. 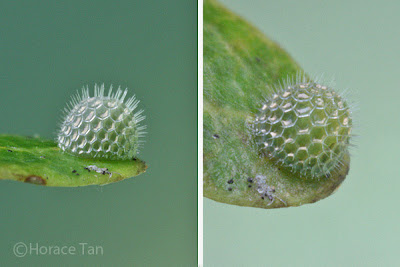 Two views of an egg of the Colonel laid at a leaf tip. Diameter: 1mm. 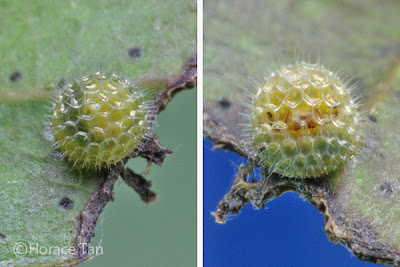 Two views of a mature egg of the Colonel. The head and mandibles are visible in the right view.

The egg takes about 3 days to hatch. The young caterpillar emerges by eating away part of the egg shell. The rest of the egg shell becomes the first meal for the newly hatched, which has a cylindrical pale yellowish green body covered with many small tubercles and short setae. The head capsule is yellowish brown in color. 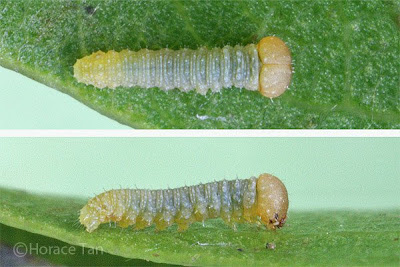 Two views of a newly hatched caterpillar of the Colonel, length: 2mm. 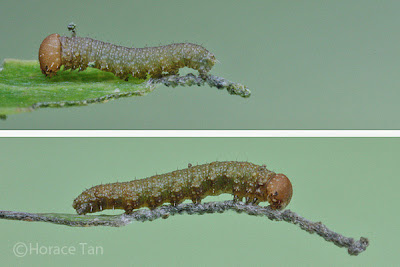 An early 1st instar caterpillar of the Colonel working on lengthening its frass chain. 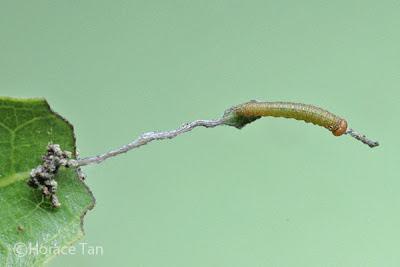 One 1st instar caterpillar resting on the exposed midrib/frass-chain structure.

The body color of the 2nd instar caterpillar is pale brown with a series of lateral dark patches and a faint dorsal band black in color. Besides tiny tubercles covering most of its body surface, the 2nd instar caterpillar also features short and branched spines dorso-laterally and spiracularly. The head capsule is light brown and dotted with a number of conical tubercles. As it grows in this star, sub-spiracular white patches become visible on abdominal segments, most prominently in segment 6 to 9. This instar lasts about 3 days with the body length reaching 7-7.5mm. 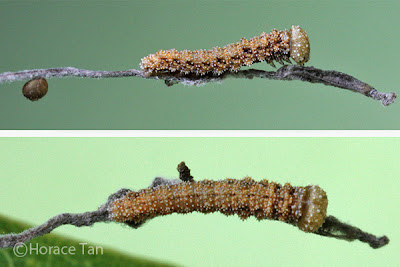 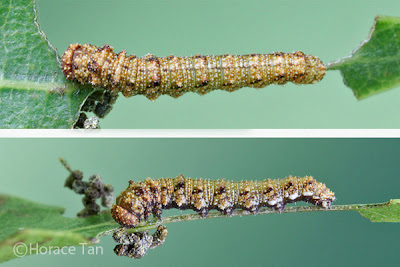 The 3rd instar caterpillar has slightly longer dorsolateral spines, with pairs on thoracic segments longer than the rest. Its head capsule is dark brown to black irorated with pale brown tubercles. This instar takes about 3 days to complete with body length reaching about 10-11mm. 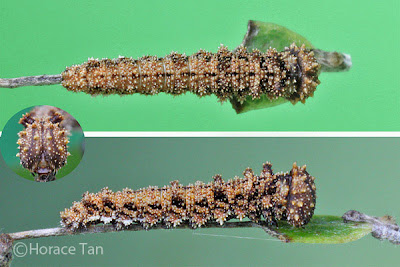 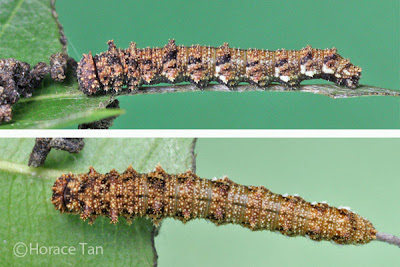 The 4th instar caterpillar has much longer dorso-lateral spines which are heavily branched. The body is brown to reddish brown in color. Besides conical tubercles, the head capsule also carries some short spines. This instar lasts 3 days with body length reaching about 18mm-19mm. 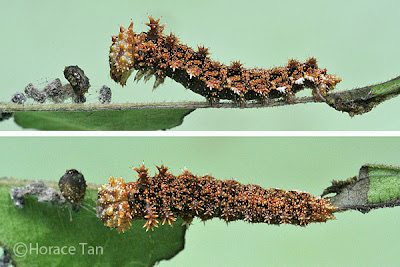 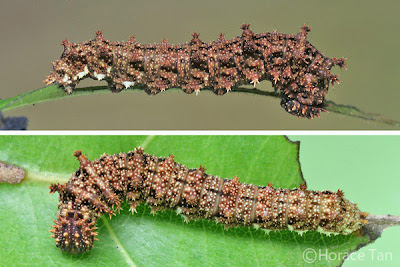 The 5th and final instar brings about a drastic change in appearance. Now the branched dorso-lateral spines very well developed on all body segments with those on the meso- and metathorax being the longest. Newly moulted caterpillar has deep reddish brown spines, but the color changes to pinkish red as the caterpillar grows. The body base color is initially a mix of green and brown, but this soon changes to a uniform green color as growth proceeds in this instar. 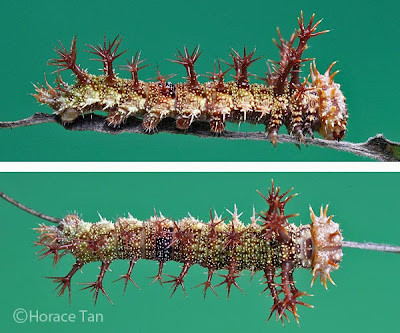 There is one prominent pinkish red saddle mark on the 5th abdominal segment (as typical in many Athyma spp). The light to dark brown head capsule has much longer and pointed spines. As with other members of the Limenities subgroup, when disturbed, the caterpillar adopts a characteristic posture with the anterior body arched and the head tucked beneath the thorax. 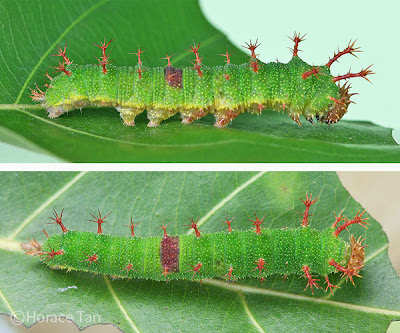 Two views of a 5th instar caterpillar, late in this stage, length: 29mm. 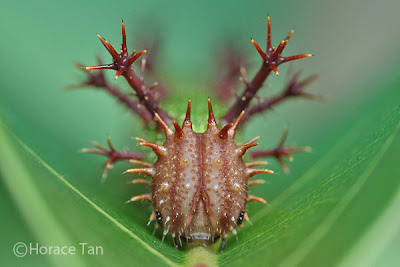 The 5th instar lasts for 6 days, and the body length reaches up to 30-32mm. On the last day, the color of the body and the spines changes to yellowish brown and then eventually to pale brown. The caterpillar ceases feeding and wanders around. Eventually it comes to a half on a branch/stem or a leaf underside, where the caterpillar spins a silk pad from which it soon hangs vertically to take on the pre-pupatory pose. Within the few hours prior to pupation, the caterpillar gradually relaxes and lengthens to a straight posture. Waves of contraction soon travel from the the rear end to the head until the pupation event kicks in. 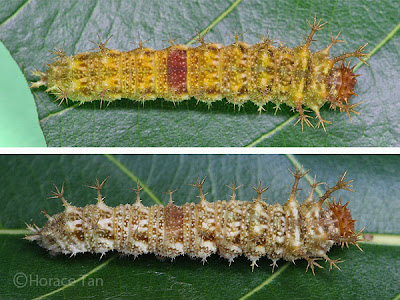 Two views of a 5th instar caterpillar, late in this stage, with color changes taking place. 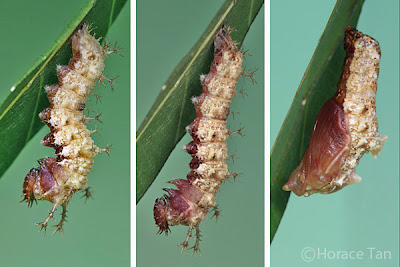 Pre-pupatory larva. Left: early stage with in curl-up posture. Middle: soon to pupate with
straightened posturet. Right: near the end of the pupation event.

Pupation takes place a day later. The pupa suspends itself from the silk pad with no supporting silk girdle. It is almost entirely pale brown in color with segments and parts outlined in a darker shade of brown. The abdominal segments are slender, and the thoracic portion being larger and expanded laterally. Dorsally, there are two prominent processes curved towards each other. When disturbed, the abdominal segments flex laterally, and could stay in that position for a period of time. Length of pupae: 18-19mm. 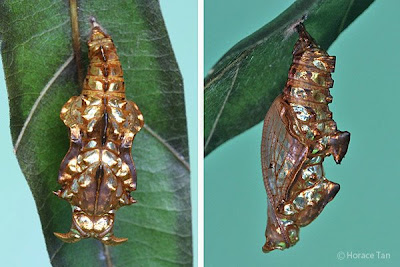 Two views of a shining pupa of the Colonel.
After about 5 days of development, the pupal skin turns translucent as the development within the pupal case comes to an end. The spots and streak on the forewing upperside also become discernible. The following day, soon after day break, the adult butterfly emerges from the pupal case. 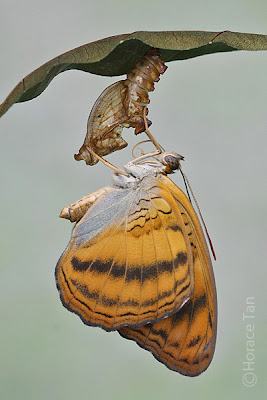 A newly eclosed Colonel resting on its empty pupal case. 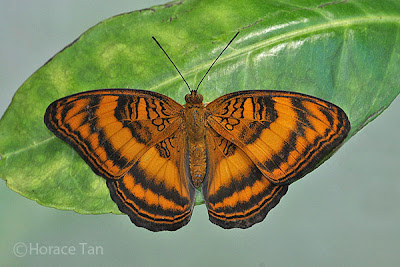