Tigers, Crows and the Rattlebox Plant 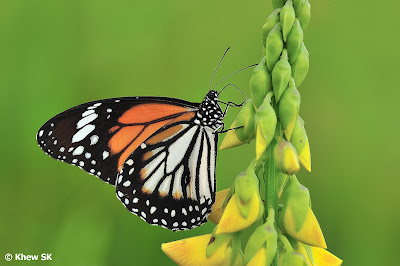 A Black Veined Tiger feeding on the secretions from the young flower buds of the Rattlebox Plant
The Danainae butterflies, often referred to as the "Tigers and Crows" are known to be attracted to some plants to sequester chemical substances to aid in biosynthesis of a pheremone component. These pheromones in the males are used for attracting females in courtship, and the eventual process of mating and procreation. 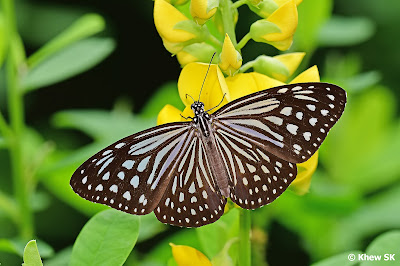 A Dark Glassy Tiger feeding on the secretions from the yellow flower of the Rattlebox Plant
Plants in the families Boraginaceae, Asteraceae and Fabaceae are usually targeted by adult Danainae butterflies for a particular chemical substance called pyrrolizidine alkaloid (or PA). These "Tigers and Crows" have previously been recognised by the early authors to be attracted to the dried leaves of Heliotropium indicum (Boraginaceae) which is often used to attract these butterflies for collection purposes. 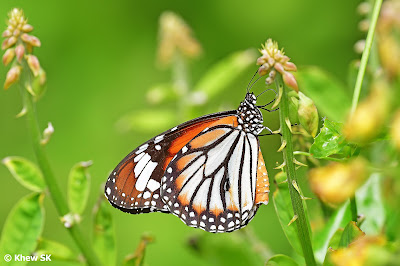 A male Common Tiger feeding on the secretions from a young flower bud of the Rattlebox Plant
In the "Butterflies of the Malay Peninsula" 4th Edition, the authors noted that "In courtship, the correct sequence of dispersal of the male pheremones by the abdominal hair pencils must be followed before successful mating can take place... additional pryrrolizidine alkaloids have to be imbibed by the adult males, both from nectar and from withered or damaged plants. Droplets of fluid are regurgitated onto the plant and then reimbibed." 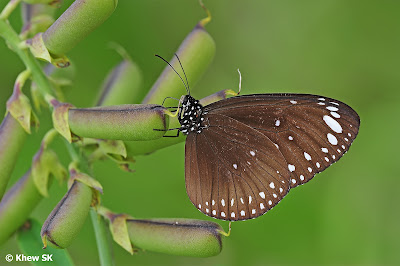 A Spotted Black Crow feeding on the sap after scratching the surface of a pea pod of the Rattlebox Plant
The authors of "Butterflies of Hong Kong" also observed this behaviour of the Danainae using their midtarsi claws to scratch the "soft surfaces of the leaves, stems, calyx cups, pod stalks, and damaged areas and the exuding sap is greedily imbibed, the proboscis moving about in an agitated manner." It was also observed that in Hong Kong, although there are 8 species of Crotalaria, the Danainae fed in this manner on only C. retusa."
A Common Tiger (Danaus genutia genutia) displaying plant-scratching behaviour on the flower bud of the Rattlebox Plant (Crotalaria retusa). Click to play video.
The same plant-scratching behaviour has also been observed many times in Singapore and Malaysia. The presence of the Rattlebox Plant (Crotalaria retusa) (Fabaceae) in a garden or park, has often attracted a variety of different Tigers and Crows to display this behaviour. At times, up to a dozen or more individuals of different species of Danainae have been observed congregated at a single plant, feeding on various parts of the Rattlebox Plant from the buds to the seed pods. 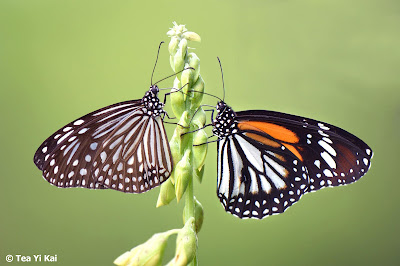 Over years of observations of this plant-scratching behaviour by Danainae species, we have recorded at least nine different species of the Tigers and Crows feeding at Crotalaria retusa. Whilst some Danainae species do not stay as long as others, there is obviously a need for these species to feed on the chemicals that are present on various parts of this plant - from the flowers to leaves and seed pods. 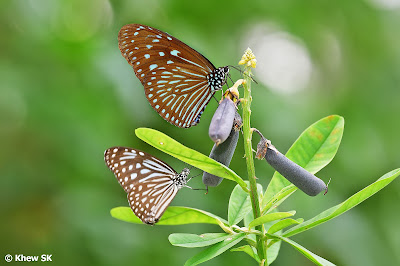 A female Striped Blue Crow joins in the search for the alkaloids from the Rattlebox Plant
Interestingly, a female Striped Blue Crow (Euploea mulciber mulciber) was also observed to feed on the sap from the stem of a seed pod of the plant. Was she looking for PAs as well? Or was it some other chemical substance in the fluid of the plant that she is searching for? Or do females also need to sequester PAs for other biological functions that have yet to be ascertained? 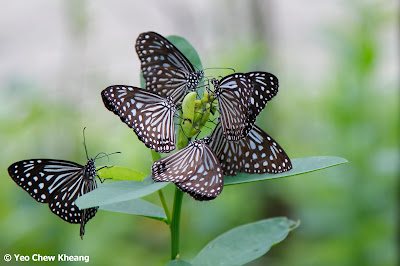 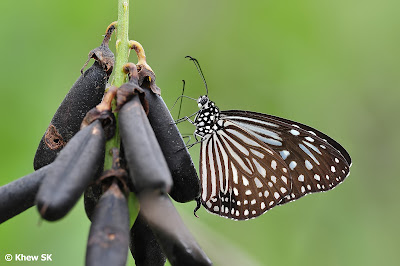 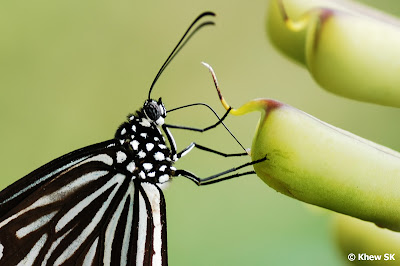 A Dark Glassy Tiger feeding on the sap of the seed pod of the Rattlebox Plant. Note the scratch marks on the seed pod caused by the sharp tarsal claws of the butterfly 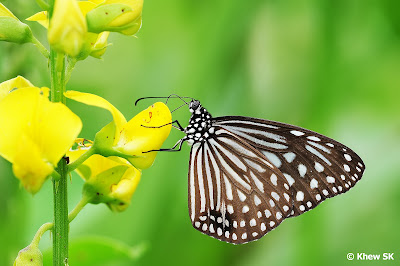 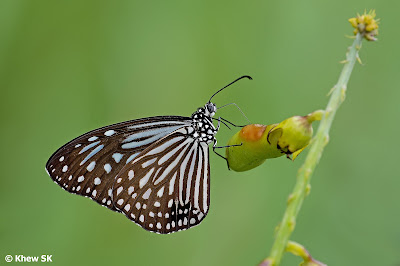 A Dark Glassy Tiger feeding on the sap of a damaged young pea pod of the Rattlebox Plant
Amongst the Danainae, the most often-encountered species that displays the "plant-scratch and feeding" behaviour is the Dark Glassy Tiger (Parantica agleoides agleoides). They seem to be very quickly attracted to the Rattlebox Plant whenever this plant is available at our parks and gardens, and in some instances, many individuals are observed, congregated on the plant and feeding greedily.
A Common Tiger exhibiting the leaf-scratching behaviour on the Rattlebox Plant. Click to play video 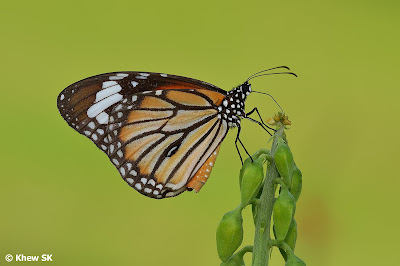 The Common Tiger (Danaus genutia genutia) is almost equally often encountered feeding (compared to the Dark Glassy Tiger) on the damaged parts of the Rattlebox Plant, particularly after some vigorous scratching by the butterflies. There have been observations of the Common Tiger feeding on various parts of the Rattlebox Plant, both with and without the scratching behaviour.  In some cases, the butterfly merely fed on the moisture from the leaves or flower buds of the plant. 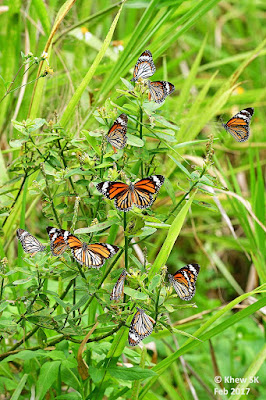 How many Common Tigers can you count on this Rattlebox Plant?
In one observation at Coney Island Park at a damaged Rattlebox Plant, there were at least 11 Common Tigers feeding and fluttering restlessly around the plant, vying for and nudging each other in competing for the best spot to imbibe the PA.
A Black Veined Tiger feeding on the damaged young shoots of the Rattlebox Plant. Click to play video 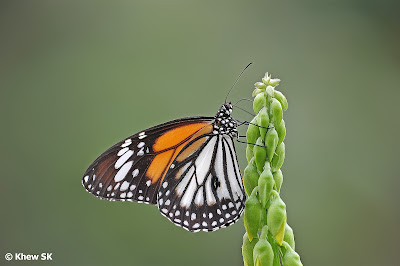 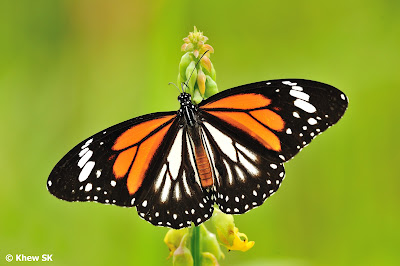 The similar-looking Black Veined Tiger (Danaus melanippus hegesippus) is another Danainae that is regularly seen around the Rattlebox Plants. The species was recorded on this video showing an individual feeding on the damaged young shoots of the plant. In other observations, the Black Veined Tigers have been seen to be feeding on the undamaged young flower buds of the Rattlebox Plant. 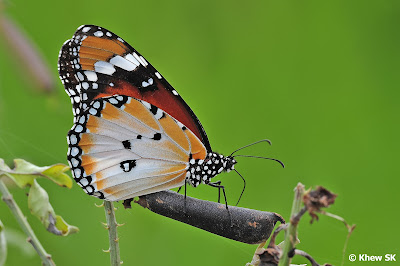 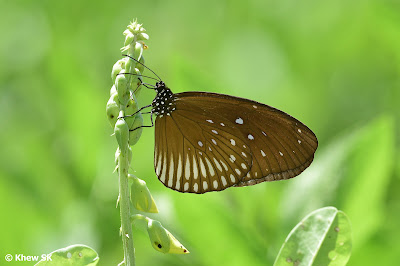 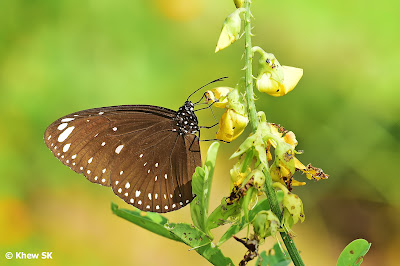 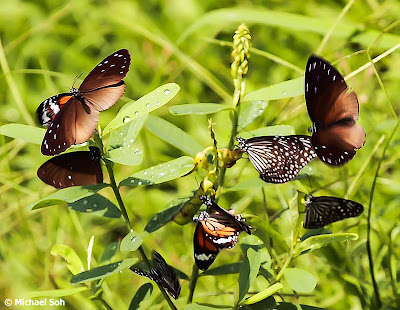 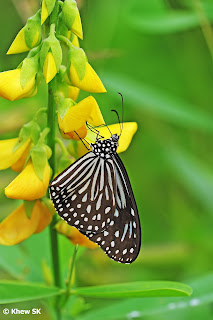 The Rattlebox Plant is a useful addition in urban parks and gardens, and certainly in dedicated butterfly gardens. Despite being sometimes considered a "weed", its attractive green foliage and bright yellow flowers makes it a pretty plant for a landscaped garden. It is considered one of those "butterfly magnets", especially for the leaf-scratching Danainae butterflies. The plant is also a caterpillar host plant for the Pea Blue (Lampides boeticus).
Text by Khew SK : Photos by Khew SK, Michael Soh, Tea Yi Kai and Yeo Chew Kheang.
References : Leaf Scratching - A Specialised Behaviour of Danainae Butterflies (Lepidoptera) for Gathering Secondary Plant Substances : Michael Boppre : Oecologia (Berlin) (1983) 59:414-416
Posted by Commander at 6:42 PM