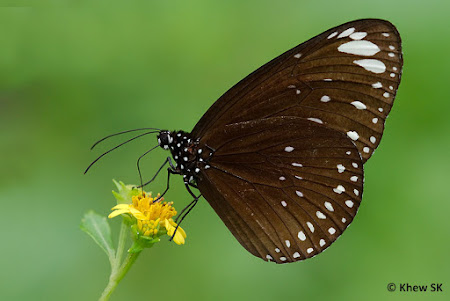 The Spotted Black Crow feeding on the flower of the Sea Ox Eye (Melanthera biflora) a "weed" that is found in abundance in back mangrove areas
The month of May saw the weather changing from hot and dry to several days of torrential rain and gloomy weather. The earlier forecast of a dry spell by the National Environment Agency's Meteorological Service was quickly amended to warnings of intermittent thunderstorms and hot humid weather again. 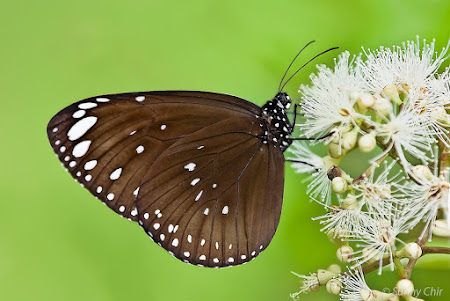 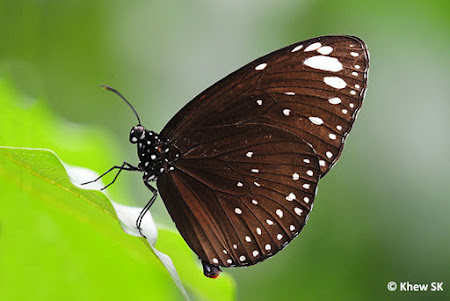 The expected 'butterfly season' this year did not materialise. ButterflyCircle members who were out in the field all reported a rather consistent observation - that there were fewer butterflies at this time of the year compared to previous years. Did any weather phenomenon alter the butterfly activity? Or is this an exceptional year where there is distinctly a lower butterfly count than before? Whether this will continue in the coming years, we will have to continue to observe. 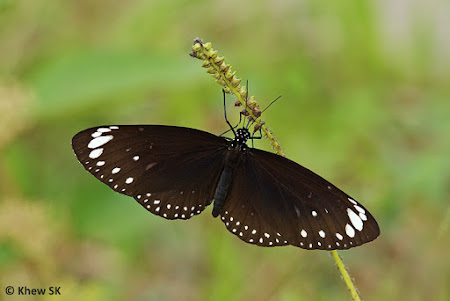 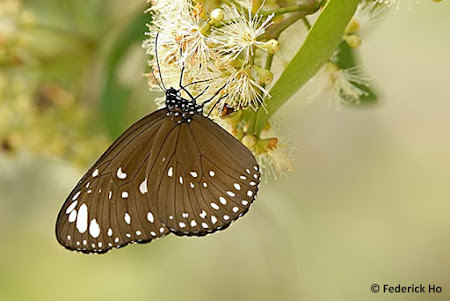 Globally, the wrath of Mother Nature was felt in Nepal, with a major earthquake striking towards the end of April, and another aftershock that occurred on 12 May. Considering the enormity of the earthquake, registering 7.8 on the Moment Magnitude Scale, casualty was around 8,000 fatalities and over 19,000 injured and even more made homeless. 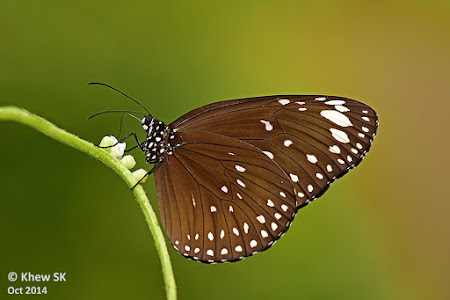 If such an earthquake were to strike a more densely populated city, the casualty rate would have been unimaginable. Still, a life lost is a life lost. And the unfortunate citizens of Nepal who made it through the aftermath of the disaster need a lot of help in picking their lives up. My company organised an in-house donation drive, and managed to raise over S$8,000 for the victims of the quake. A lot more needs to be done, and different groups are organising themselves to give whatever assistance they can - in cash, in kind and other forms of aid. 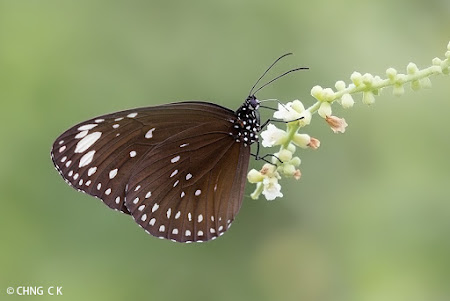 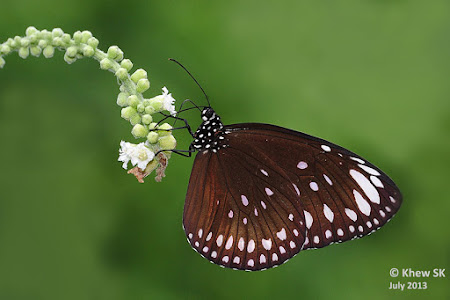 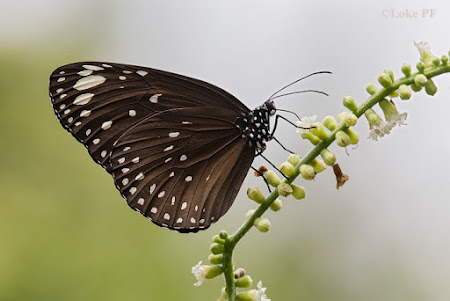 One of the favourite nectaring source of the Spotted Black Crow is the StringBush (Cordia cylindristachya)
Over in Singapore, the SG50 (celebration of Singapore's 50th anniversary) events continue in various shapes and sizes. Preparation for the 28th South East Asian (SEA) games in Singapore is well under way. The games will commence on 5 Jun till 16 Jun. It has been 22 years since the games were held in Singapore - the last time being in 1993. With Singapore's new Sports Hub and updated facilities since then, the games venues are expected to be more sophisticated. 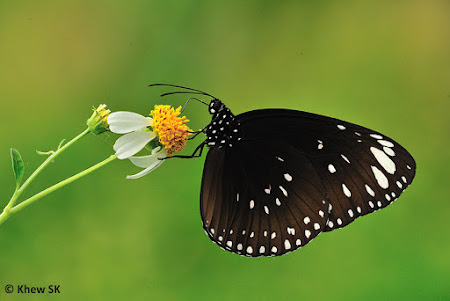 A Spotted Black Crow feeds on the flower of Bidens pilosa


This month, we feature one of the many "Crow" butterflies of Singapore, the Spotted Black Crow (Euploea crameri bremeri). The Crows from the genus Euploea feature medium-sized butterflies with predominantly dark coloured (navy blue or black) wings. The characteristic black or blue butterflies with prominent white spots and streaks, resembling their avian namesake Crows, probably gave rise to their collective name for this group of butterflies. 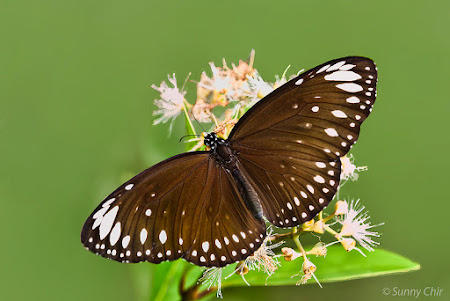 A Spotted Black Crow feeding at the flowers of Syzygium zeylanicum

The Spotted Black Crow is moderately rare in Singapore, and often observed singly where it occurs. The adult butterfly has an average wingspan of 70-90mm. It is usually found in forested areas, and particularly near mangrove and coastal areas like Pasir Ris Park, Pulau Ubin and Sg Buloh Wetland Reserve. 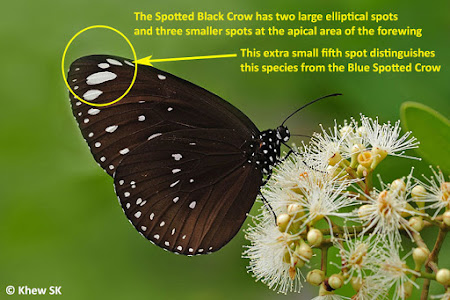 The Spotted Black Crow's wings are predominantly black on the upperside and underside, except for the series of white marginal and submarginal spots on both the fore and hindwings. There are five apical spots on the forewing, two large and three small elliptical spots. The smallest spot on the forewing is one of the distinguishing features that separate this species from the closely-related Blue Spotted Crow (Euploea midamus singapura). Unlike some of the other species in the genus, the male Spotted Black Crow does not have a brand on the forewing. The number of white spots on the hindwing and marginal area can be variable, and some individuals can have either missing spots, or larger than usual spots on the hindwings. Females are paler than the males. 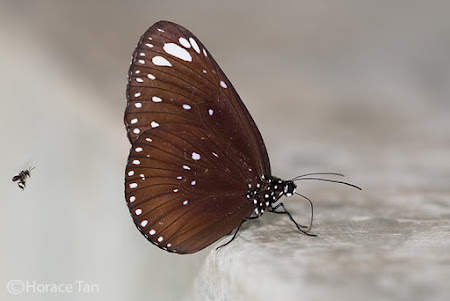 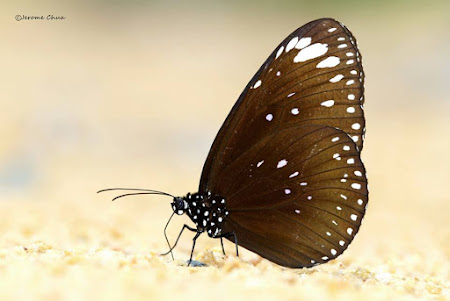 The butterfly flies and glides unhurriedly whilst looking for flowers to feed on. However, it is very alert and when photographing this species, a slight movement would make the butterfly take off quickly. Occasionally, males can be observed puddling at damp sandbanks and concrete structures in the nature reserves. 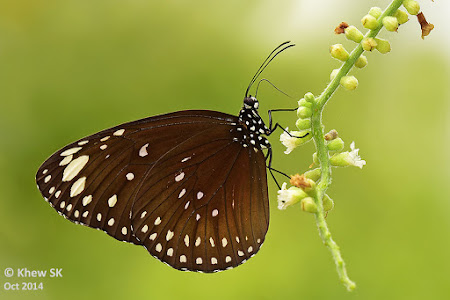 When alarmed the male Spotted Black Crow extrudes a pair of yellow hair pencils from its abdomen. These hair pencils are pheromone-signalling structures often present in male Danainae butterflies. Males Danainaes use hair-pencils in courtship behaviours with females. The pheromones excreted by the hair-pencils serve as both aphrodisiacs and tranquilizers to females as well as repellents to conspecific males 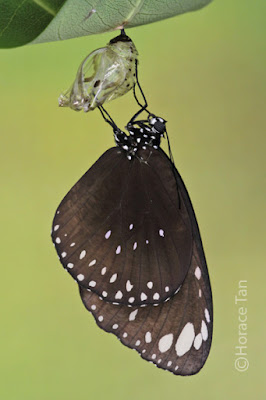 The full life history of the Spotted Black Crow has been successfully recorded on this blog, and can be found here. The local caterpillar host plants in Singapore are Gymnanthera oblonga (Apocynaceae, common name: Sea Rubber Vine), Parsonsia helicandra (Apocynaceae). Both plants are lactiferous and are often found in the vicinity of mangrove areas. 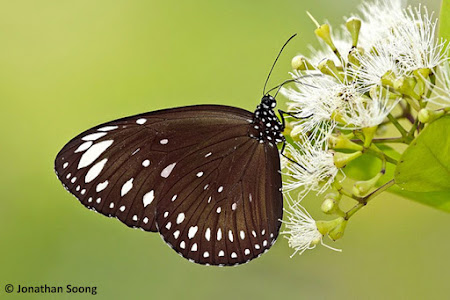 The typical colour and spots of the Crows are believed to be aposematic colouration that signal to would-be predators (especially birds) that the butterflies are distasteful and should be avoided.

Posted by Commander at 5:12 PM 0 comments