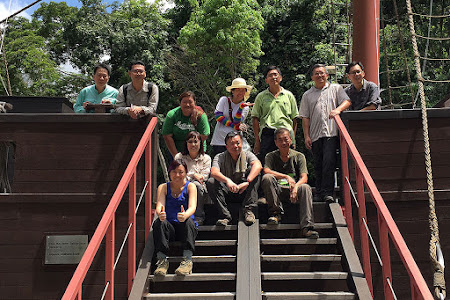 All aboard!  ButterflyCircle and Seletar CC members at OBS Ubin


At the invitation of OBS to conduct a butterfly survey on their premises on the western sector of Pulau Ubin, ButterflyCircle members made a trip to the OBS Ubin campus this morning. Accompanied by the enthusiastic members of the Seletar Country Club Butterfly Garden, a total of 11 butterfly enthusiasts turned up at the Punggol Point Jetty on this hot and humid morning. The morning sky was clear blue with nice cloud formations. 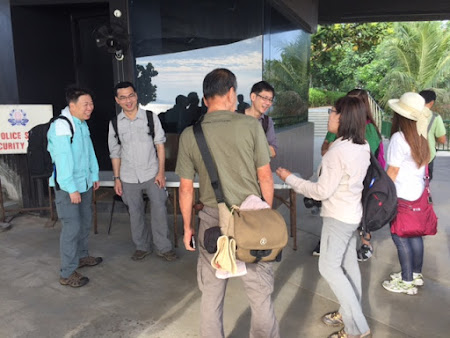 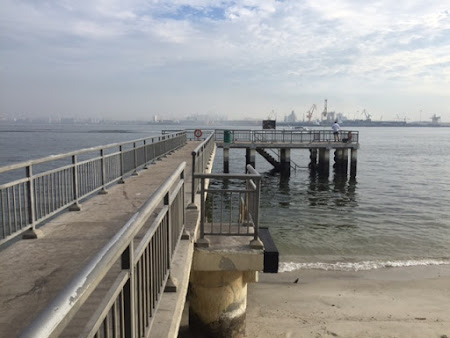 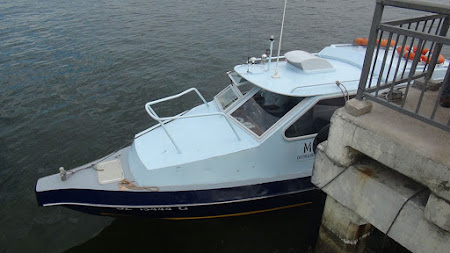 Our ride from Punggol Point Jetty to OBS Ubin


We met our hospitable hosts from OBS, Mr Ng Thian Choon, Dy Director (Programmes and Partnerships) and Mr Bernard Teo, Snr Asst Director (Estates Services) at the Punggol OBS office and headed for the Punggol Point Jetty. Transport to OBS Ubin was via private ferry owned by OBS. The trip across the channel of water took much shorter than the typical trip from Changi Ferry Terminal to Pulau Ubin via the commercial bumboats. 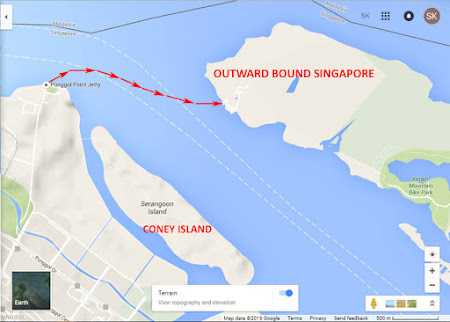 
Along the way, we could see the newly opened Coney Island. Coincidentally, there was a special run event on the island this morning. Another OBS campus will be built on Coney Island in the near future, to cope with the increasing demand from educational institutions, and also enhancing the OBS programme in Singapore. 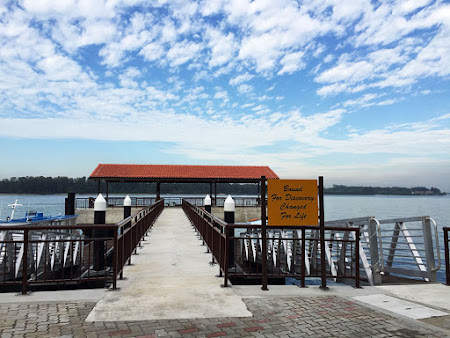 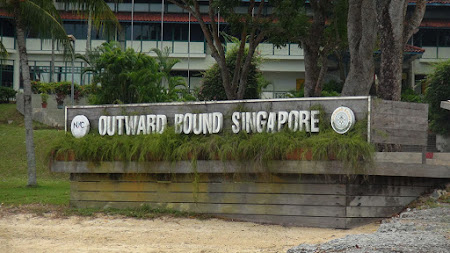 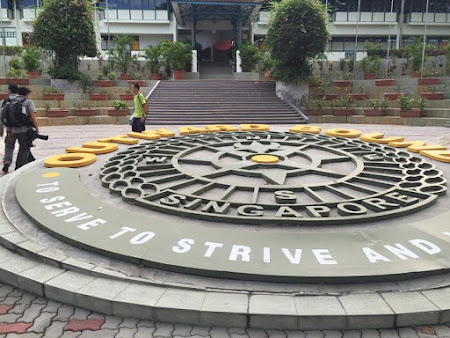 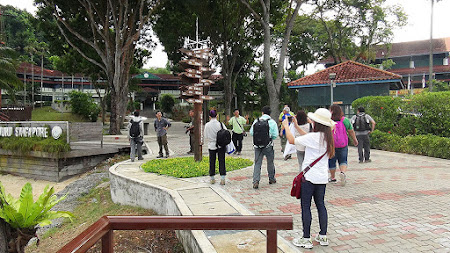 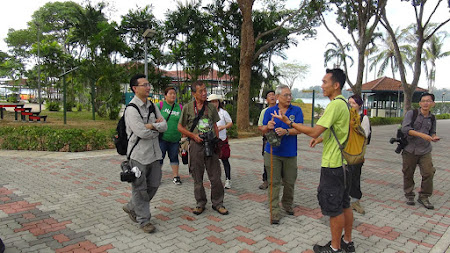 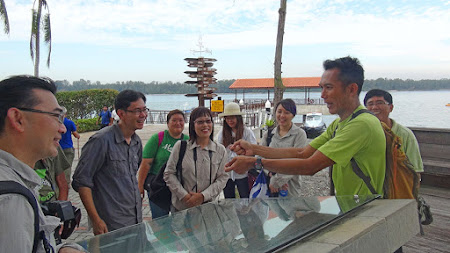 At OBS Ubin and a short briefing by Choon


We reached OBS Camp 1 via the newly-constructed jetty, and Choon briefed the group about the facilities at OBS, and where we will trek this morning for the butterfly survey. The group started off the transect heading west towards a promontory called Tanjung Tajam. Along the way, we reached an open area that suffered a bush fire some time in March 2014, wiping out about 3 Hectares of vegetation. Reforestation efforts are in progress, and we could see the newly planted areas slowly reclaiming the open area. 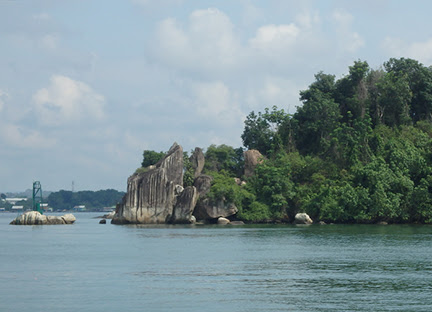 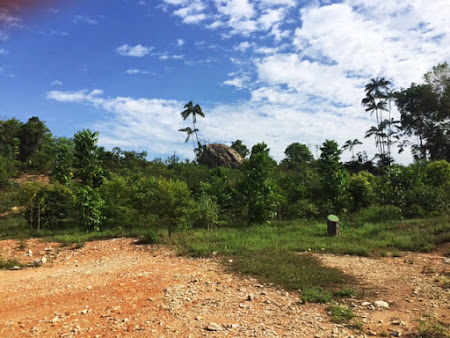 The Tanjung Tajam area which was destroyed by fire in 2014.  Reforestation is in progress


Our first butterflies were up and about, and the first species recorded was the Sumatran Sunbeam (Curetis saronis sumatrana) at the Camp 1 premises. Along the transect westwards, we spotted quite a number of Knights flying around and perching on leaves just beyond our reach. It is noted that the Knight's caterpillar host plant, Ixora congesta were plentiful in the area. We saw a Spotted Black Crow, a strange-looking Delias which did not stop for us, and a couple of Common Tits dogfighting at high level. A Long Banded Silverline (Spindasis lohita senama) perched on the bushes nearby as we were exiting the Tanjung Tajam area. 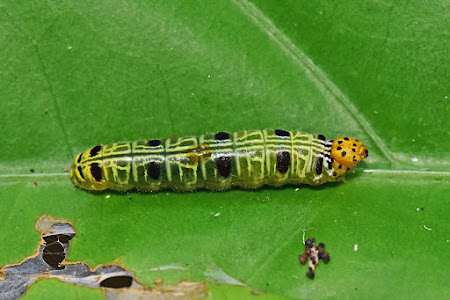 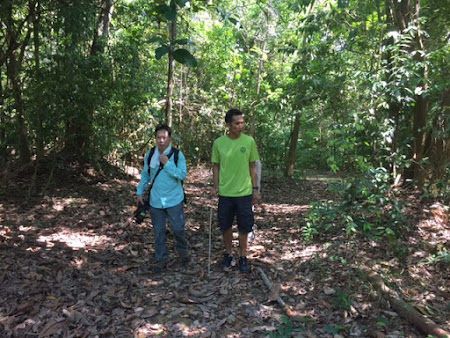 The transect continued into shaded forest, where we spotted an Orange Awlet, and another caterpillar of the same species on its host plant. Strangely the caterpillar was not in its usual leaf shelter, and was instead on the top of a leaf (which is not a good sign!). The forest floor was dry, probably due to the hot season over the past week. Knights were aplenty and we spotted no fewer than a dozen of them - both males and females, all along the forest paths. 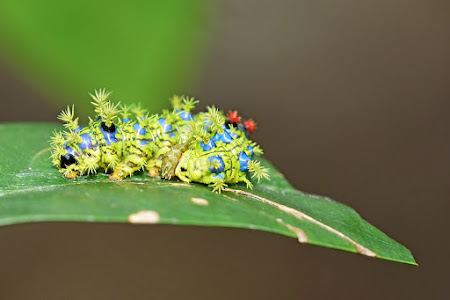 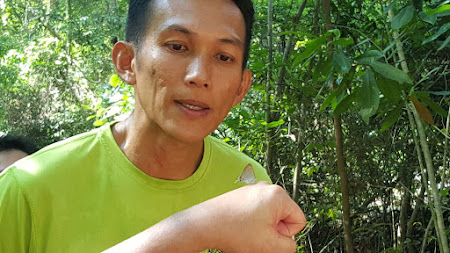 Choon taking a closer look at a friendly Common Tit


Heading to the next part of the trail towards the reservoir, we spotted a couple of Oakblues and a caterpillar of the Studded Sergeant (Athyma asura idita). Along the way, we saw two female Cruisers (Vindula dejone erotella) and a friendly male that stopped on our members before scooting off to the treetops. The sighting of the Cruisers was a surprise, because I do not recall having spotted this species on Ubin before. 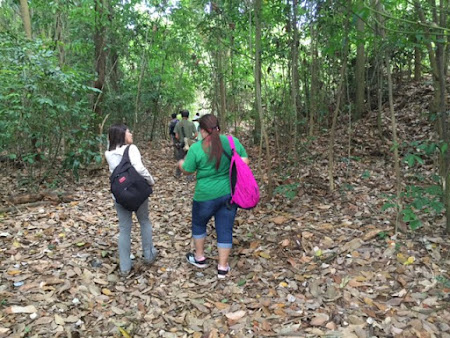 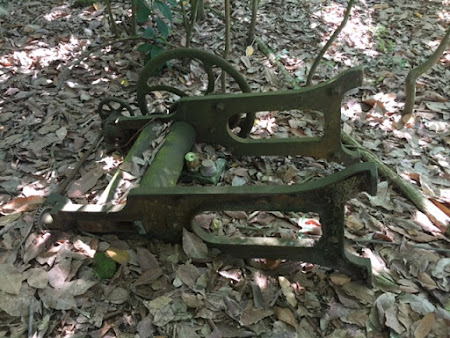 
In the shady forest understory, we spotted two Malayan Plum Judy (Abisara saturata kausambioides) flitting amongst the undergrowth. A Malay Viscount was foraging in the undergrowth, and we also saw two male Horsfield's Barons fighting for territorial dominance. Along the trail skirting around Hill 31, several other fast flying Lycaenids which looked like Common Tits were zipping around at the treetops. 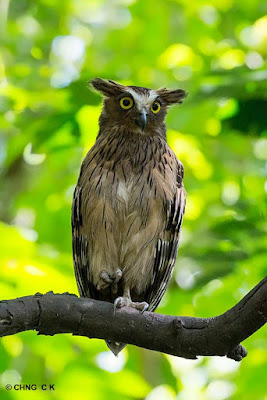 Birds aplenty too at OBS Ubin!  A Buffy Fish Owl glares down at the trespassers

The OBS area is also a birder's paradise, and we saw/heard Magpie Robins, Purple Throated Sunbirds and a huge Buffy Fish Owl. Perhaps not being easily accessible to the general public, the biodiversity in the OBS premises is relatively undisturbed most of the time, and is able to thrive in that area. 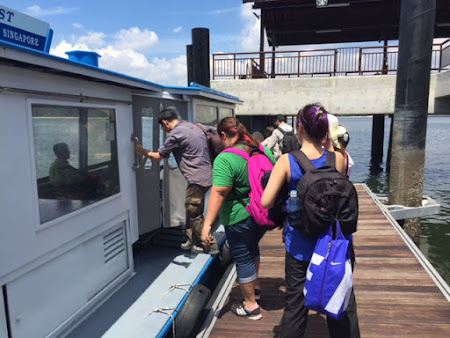 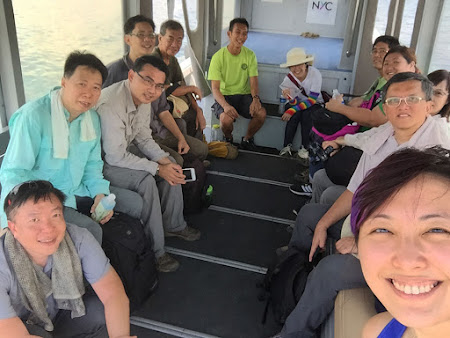 We ended the walk at around 11:30am, and the weather was very hot and humid. After a quick freshening up, we headed to the jetty where the OBS boatman was already waiting for us in a larger boat this time. The western sector of Ubin where the OBS campus is, covers an area of about 9 Hectares. We only scouted about a third of the area, and were impressed with the butterfly diversity. We will certainly return for a more closer survey and hopefully find more species to add to the OBS checklist. 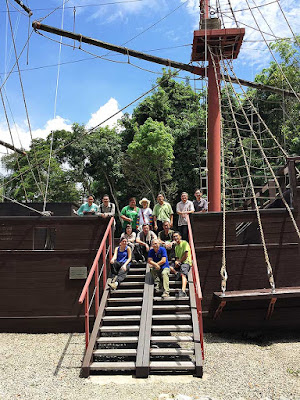 Checklist of Butterflies spotted at OBS Ubin on 16 April 2016