Butterfly of the Month - September 2021 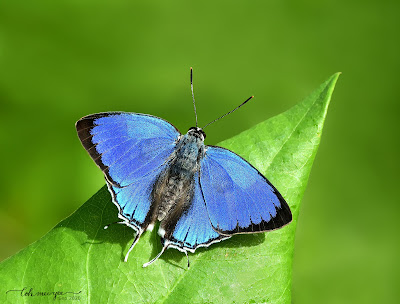 A male Banded Royal sunbathing on a leaf, showing off its shining blue uppersides
The year 2021 marches on and we take another step nearer to the end of the 9th month of the year. The Hungry Ghosts have long returned to the underworld, we celebrated the Mid-Autumn Festival on 21 Sep, and had our fill of sugar-laden mooncakes of various types from snowskin to durian-filled ones. Amidst all the activities around us, COVID19 did not go away. It's not going away anytime soon, and dealing with it, is key to how we get our normal lives back, eventually. 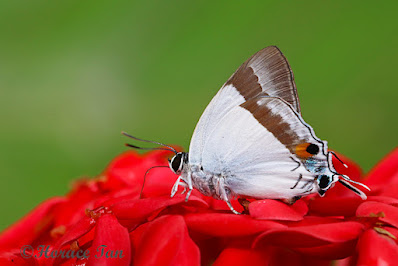 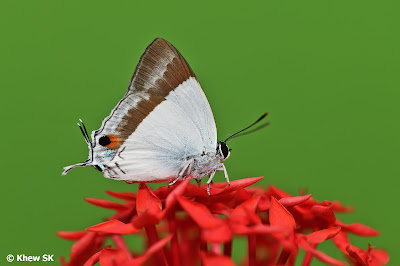 But the virus keeps mutating, like playing war games with humans - ever changing, ever counteracting each move we make. Even as the delta variant makes its way around the world, there are reports of new strains appearing ominously. It makes us wonder if the earlier designed vaccines will work and how effective the vaccines will be, in warding off the new variants - if at all! 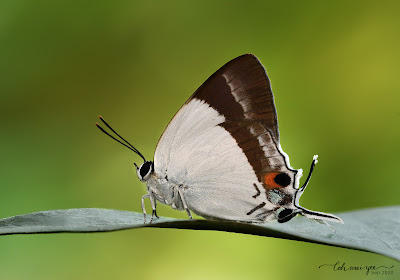 Each country and its government handles the pandemic issues differently. There are no precedents, no rule books to turn to for solutions. Each measure is an experiment of sorts. Some seem to work, others appear to fail miserably. Time will tell.  But what had worked previously, in the earlier stages of the pandemic spread, seem to be wearing thin, and may no longer be effective. Aggressive lock-downs seem to be no longer working well, other than incurring the wrath of the population and severely damaging the economy and livelihoods. 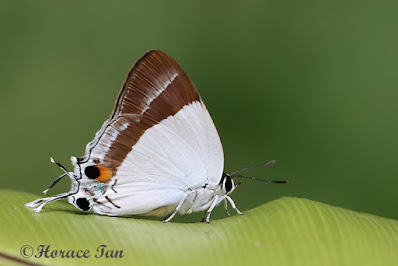 As each country strives towards the elusive "herd immunity" - whether by vaccination or by widespread infection, it is a race against time. But statistics are beginning to paint a clearer picture where there is some measure of protection amongst those who are fully vaccinated. Even when infected, symptoms are milder or in some cases, the affected individual is even asymptomatic. Older people, however, are more vulnerable, especially those who are suffering from other chronic ailments. 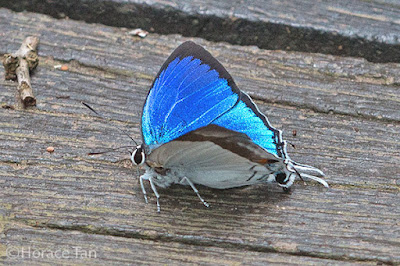 A male Banded Royal opening its wings partially to sunbathe at the peak of Bukit Timah Nature Reserve
Singapore is dealing with another increase in infections daily, passing the four-figure mark, and reaching a daily number of community infections that has never been seen since the start of the pandemic. Whilst the strategy is to eventually accept COVID19 as "endemic", the pace at which the spread increased was not expected. It created a critical strain on our healthcare resources and front line workers. And from tomorrow, we will be back into tighter containment measures that will put limits on our daily lives and mobility. It is understandably necessary at this point in time, and we can only hope that it will work. 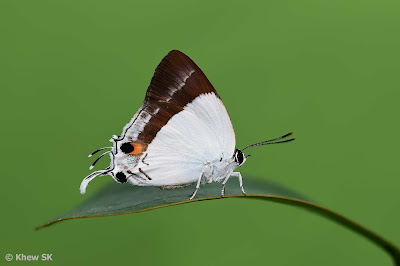 We move on to our butterflies now. Oblivious to the pandemic in our human world, our winged friends are in a much better shape than us. They are still thriving, and with more photographers out and about during the pandemic, there appears to be more sightings of butterflies in various habitats all around Singapore. Our Butterfly of the Month for September 2021, is the beautiful but rare Banded Royal (Rachana jalindra burbona). 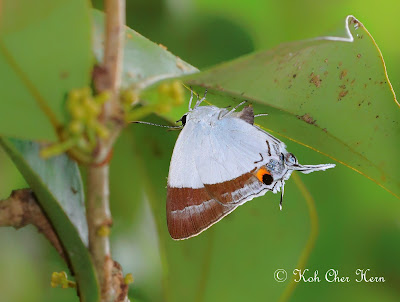 A female Banded Royal trying to oviposit on the leaf of the Common Chinese Mistletoe (Macrosolen cochinchinensis), its caterpillar host plant
This Lycaenid depends on its host plant, a mistletoe (parasitic plant) for its early stages. The host plant, the Common Chinese Mistletoe (Macrosolen cochinchinensis) is hardly common. Being a parasitic plant that requires a host on which to survive, the plant is not particularly welcomed in urban gardens and is often removed by landscape maintenance workers - due to concerns that they may kill the host plant. However, it is not certain if this is just an assumption or were there many real instances where the host plant perished due to the existence of this parasitic plant. 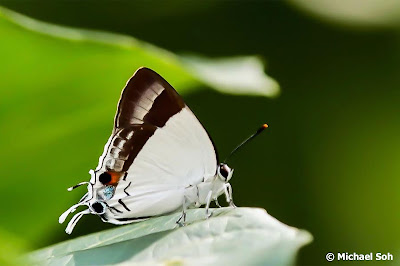 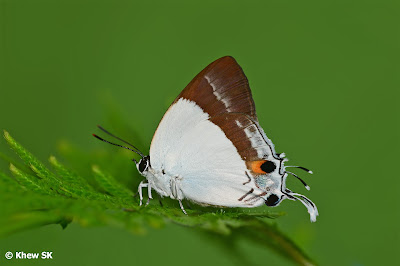 Male (top) and female (bottom) Banded Royal
The Banded Royal was recorded as a re-discovery when it was spotted in 2006 in the forested nature reserves in Singapore. After that first encounter, sporadic sightings of the species have been recorded from time to time. Sighting records of the Banded Royal appear to suggest that it is widely distributed, appearing in various locations and habitats from the forested nature reserves to the fringes of urban parks, and even on our offshore islands like Pulau Ubin. 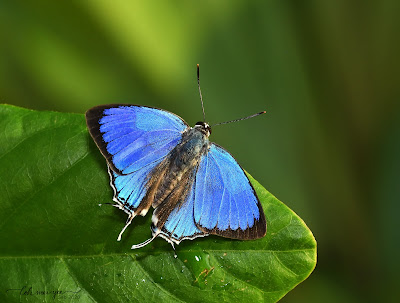 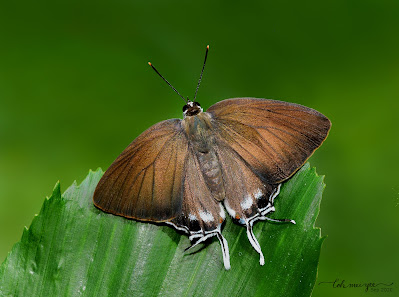 Upperside of the Banded Royal - Male with shining blue upperside (top) and Female with brown upperside (bottom)
The male Banded Royal is a deep shining blue above with narrow black borders. It sports a distinctive brand at the end of the forewing cell end. The female is predominantly brown above and unmarked except for a few black spots at the tornal area of the hindwing. The underside is white, with a broad purple-brown distal border where the inner half is a darker shade of brown. 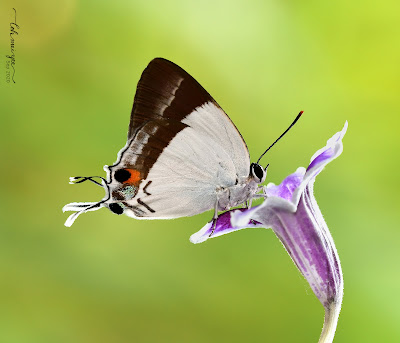 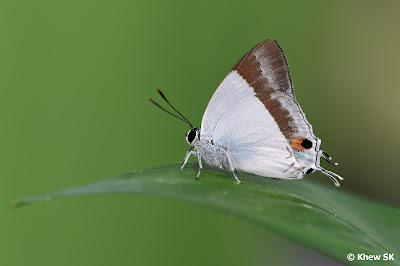 The brown apical band of the male is more suffused with white compared to the female. The underside of the hindwing has two large tornal spots, one of which is orange-crowned and the other adorned with iridescent light blue scales. There are two tails at veins 1b and 2 of the hindwing, where the one at vein 2 is black and white tipped. The eyes of the Banded Royal are jet black and rather large. 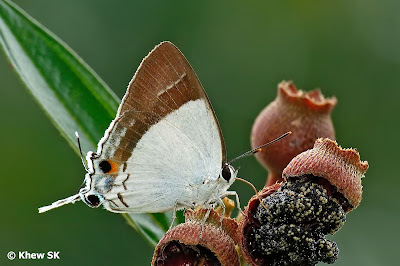