When the Melastoma Blooms...

When the Melastoma Blooms...
The Singapore Rhododendron and Butterflies 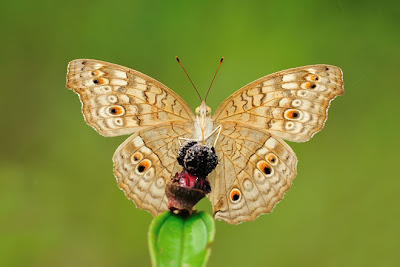 The Singapore Rhododendron (Melastoma malabathricum) is a rather amazing plant. Despite being mistakenly named so, it is neither a Rhododendron, not is it confined to Singapore only. From the plant family Melastomaceae, the Singapore (or sometimes also called Straits) Rhododendron is a common plant that springs up almost anywhere where land is cleared, or along open forest paths. The seeds of this plant are dispersed mainly by birds and mammals that feed on its rather sweet fruits, and the plant appears as commonly in the nature reserves as well as urban parks and gardens. 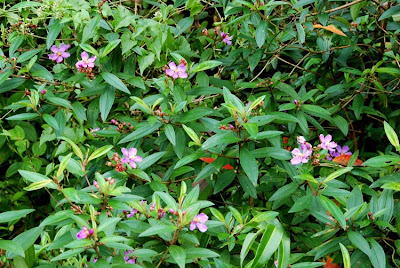 Though an under-appreciated plant by horticulturists, the Singapore Rhododendron is a favourite with bird watchers and butterfly enthusiasts. This is because the flowers and fruits are targeted by birds, butterflies and small mammals. In particular, the Scarlet Backed Flowerpecker is a regular visitor to fruiting Melastoma bushes. 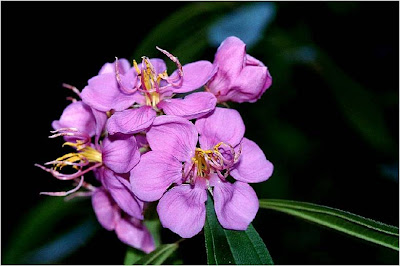 The Singapore Rhododendron usually grows as a "weed" in untended areas, normally up to a metre high, and if left to grow, can reach heights of up to 3 metres. It is a small shrub, that has tiny scales on its branches and petioles. The leaves are narrow and lanceolate, about 5-10 cm long, usually with 3 prominent veins running from the base. 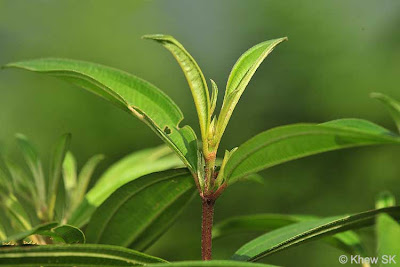 The flowers are light pink-purple, with elbowed anthers surrounding the style, and are borne in clustered inflorescences. The fruit is interesting, a sort of pod, usually about 1.5 cm long, which is covered in small bumps and topped with a persistent calyx. 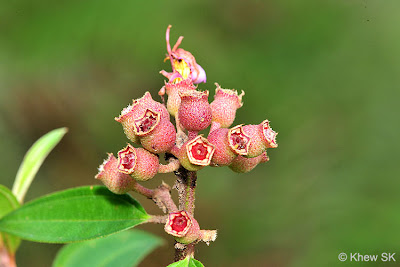 The greenish pod splits open halfway and flips over to reveal a fleshy deep purple structure studded with numerous (about a thousand) tiny seeds, and is usually 5-sectioned. The fruits are berry-like and break open irregularly. The seeds stain the mouth when eaten, and is sweet and slightly astringent. 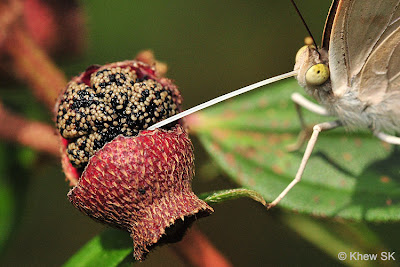 A Purple Duke extends its proboscis deep into the fruit of the Singapore Rhododendron. Note the white seeds covering the fruit


The Singapore Rhododendron and Butterflies 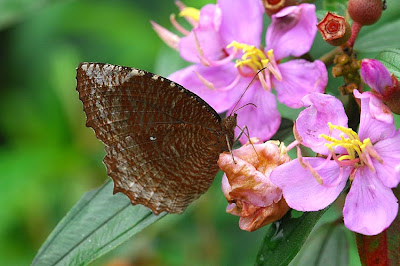 Whilst butterflies are occasionally observed to feed on the nectar of the purple-pink flowers, the primary pollinators appear to be bees and wasps. 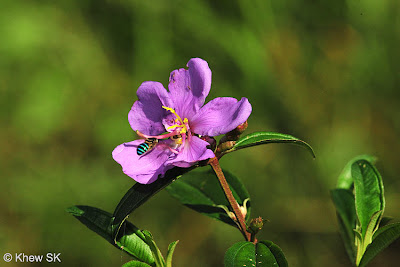 A small bee approaching the flower of the Singapore Rhododendron for nectar
It is the ripening fruits that are irrestible to butterflies, and when a bush has many such ripened fruits, there will often be swarming with butterflies of the Nymphalidae and Lycaenidae families. 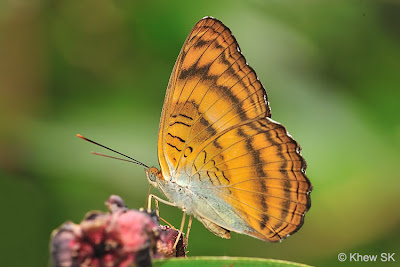 From many such encounters, ButterflyCircle members have observed that many butterflies that feed on the sweet ripened fruits can sometimes be so intoxicated as to be able to be picked off the fruits with our fingers! They can stay still and continue feeding for long periods of time, allowing the photographer to shoot many shots of a species that is usually skittish and difficult to approach. 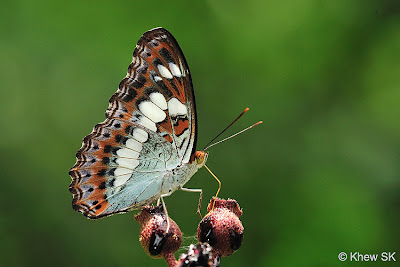 Interestingly, butterflies of the Papilionidae, Pieridae, Riodinidae and Hesperiidae families seem to have less preference for the fruits of the Singapore Rhododendron. 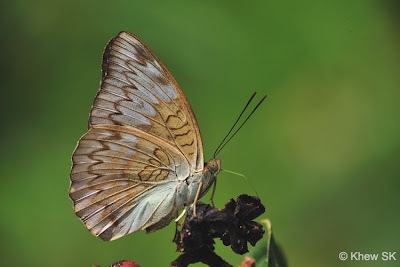 For the butterflies that feed on the ripened fruits, they often have to share the sweet bounty with ants, bees and wasps. The latter two feeders tend to also scare the butterflies away as they barge in onto the fruits. 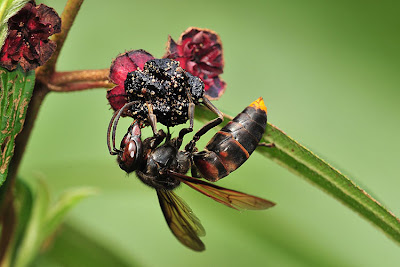 A Yellow-vented hornet (Vespa analis) helps itself to the fruits of the Singapore Rhododendron
After having their fill of the fruit juices, many of the Nymphalidae, particularly from the genera Tanaecia and Euthalia, will rest in nearby shady spots or sunbathe with their wings opened on sunlit leaves. This gives further opportunities to observe and photograph the butterflies when they are slightly more lethargic than usual. 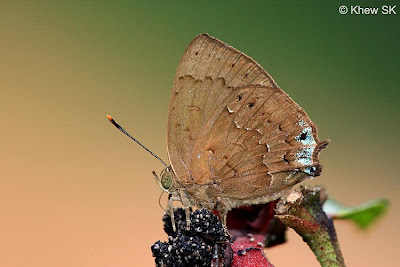 
The ripened fruits tend to be viable to attract butterflies for quite some time - often up to a week or more, as the sugary substance that the butterflies like to feed on appear to regenerate itself during the humidity of the night or after a short shower. During the daytime, the sun dries up the fruits, where it becomes less attractive to the butterflies. We've observed butterflies probing their proboscis deep into the edges of the fruit shell, where the sugars are probably still liquid enough to be imbibed by the butterflies. 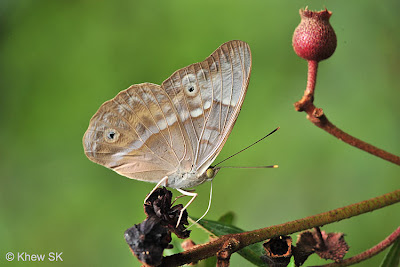 Besides providing a food source for the adult butterflies, the Singapore Rhododendron is also the known host plant to the Horsfield's Baron (Tanaecia iapis puseda) and two Lycaenids - the Long Banded Silverline (Spindasis lohita senama) and Semanga superba deliciosa. The caterpillars of all three species feed on the leaves and shoots of the plant. 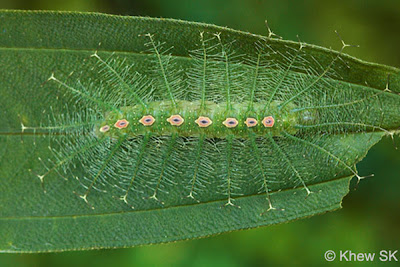 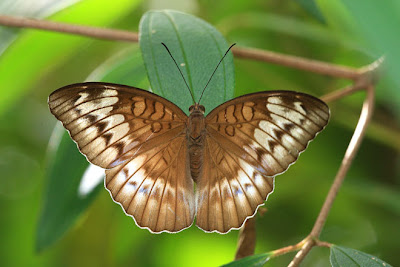 
And so the humble "weed", the Singapore Rhododendron is a very versatile plant, critical to the survival of many butterfly species in Singapore and South-East Asia, by providing nectar, sugars from the fruits and leaves for the caterpillars. 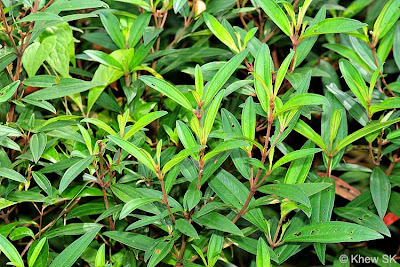