Butterfly of the Month - December 2015 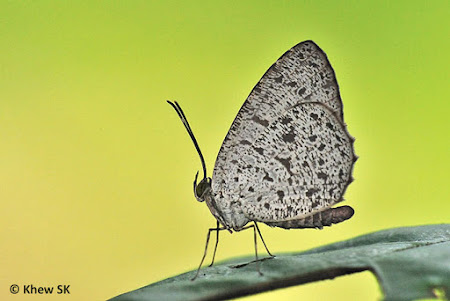 It's the final month of the year 2015 as we feature our last Butterfly of the Month in this series that has been going on for the past eight years! We started way back in December 2007 with our first feature butterfly, the Malay Lacewing. So eight years and 97 butterflies later, we now showcase our 98th butterfly of the month for December 2015. 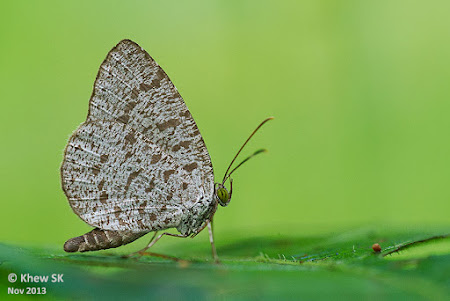 Note the extra long abdomen of the Lesser Darkwing


The monsoon season has begun a few weeks back, clearing our dreaded haze, and making our air safe to breathe again. The haze and the rainy season seems to have taken a severe toll on our butterfly population. There seems to be fewer butterflies out and about, particularly the forest-dependent species. Urban parks and gardens are still quite active with the common species visiting the flowering bushes, but numbers are generally much lower than previous years. 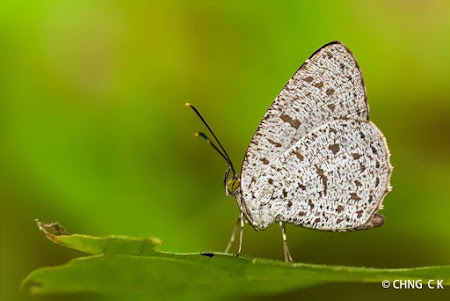 With NParks starting the biodiversity monitoring programme in collaboration with the nature community in Singapore, there will at least be a regular documentation of butterfly population in the coming years. The biodiversity surveys are done with the help of citizen science programmes and in collaboration with the public. This has the added benefit of getting a larger number of Singaporeans and the resident population more involved in nature conservation and community projects. 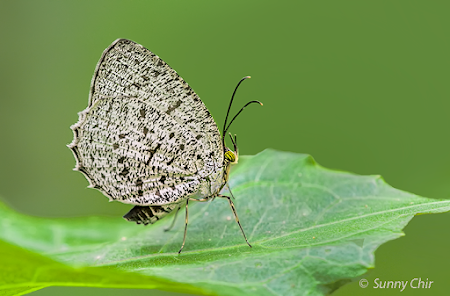 A pristine individual with a very distinct dentate hindwing


With more active community groups like the Seletar Country Club Butterfly garden group (under Mr Foo JL), the Tampines-Changkat Butterflygarden Interest Group, Bishan-Ang Mo Kio Butterfly Garden group and others, the nature conservation message is being effectively spread in the community and importantly, to the younger generation. This is encouraging, as there are now more butterfly enthusiasts working to conserve our butterfly diversity for future generations to enjoy. 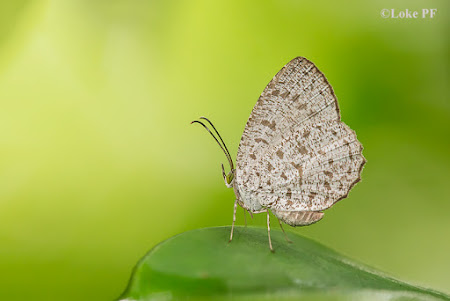 NParks is also getting in the act, with programmes like BioBlitz and the biannual Butterfly Count across urban parks in Singapore. A Species-Recovery project is also being organised to make another attempt to save the Harlequin butterfly's habitat and help to conserve this species in Singapore. JTC is also being roped in to help with the conservation programme and this will take place in 2016. 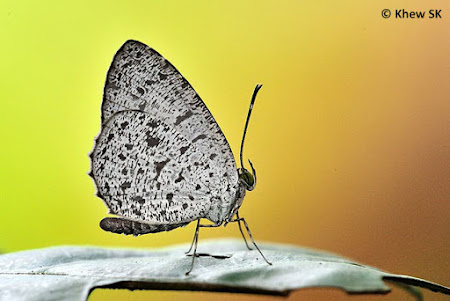 Coming back to our Butterfly of the Month for December 2015, we feature a small-sized species from the subfamily Miletinae from the Lycaenidae family. The Miletinae is often referred to as the "Harvesters", probably due to their behaviour of predating on Homoptera like aphids, coccids, mealy bugs and even ant larvae! In my earlier article on this blog, entitled Mergers, Partnerships and Betrayals, the behaviour and feeding habits of the Miletinae are discussed. 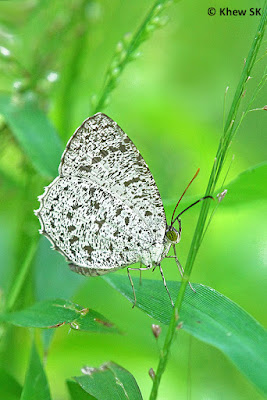 A Lesser Darkwing rests amongst some grasses


We introduce our Butterfly of the Month, the Lesser Darkwing. The original name given for this butterfly was Lesser Darkie. However, due to racial sensitivities, the name of this butterfly was amended to Lesser Darkwing. This new common name was first suggested by Dr Laurence Kirton in his 2014 book, Butterflies of Peninsular Malaysia, Singapore and Thailand. We concur with the proposed name change, and have adopted it in the 2nd Edition of Butterflies of Singapore. 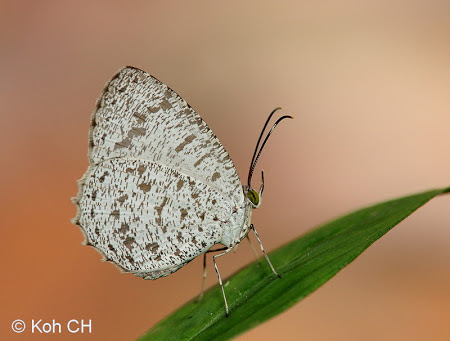 The Lesser Darkwing is a small butterfly, usually fluttering for long periods of time amongst bushes in the shade. The butterfly is usually looking for Homoptera and ant colonies that are tending to these Homoptera. Hence the distribution of this species is widespread, depending on plant species that are infested with aphids, coccids, membracids and mealy bugs. 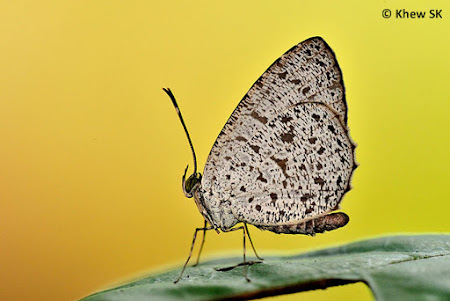 
The Lesser Darkwing is dark brown on the upperside and unmarked, except for a short light greyish brand at vein 4 of the forewing in the male. The female has a more rounded forewing and is of a warmer reddish brown above. The hindwing margins are dentate, often more prominent in pristine individuals. 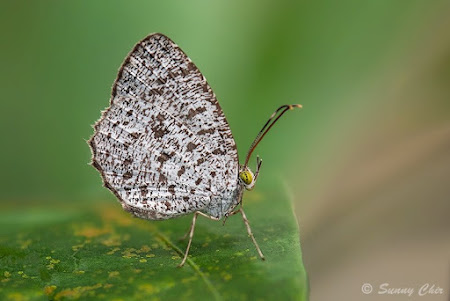 The ground colour of the underside is a greyish white and is highly variable, with a series of dark brown spots and light striations on both wings. The eyes of the Lesser Darkwing are yellowish-green. Despite having three fully developed pairs of legs, the butterfly prefers to fold its forelegs against its thorax, and use only two pairs of legs to support itself when at rest. 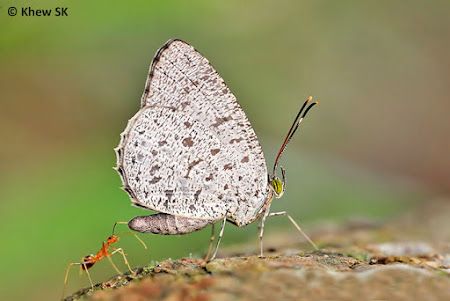 An ant checks out a Lesser Darkwing but not harming it


The species has a weak restless flight and prefers shaded forested areas where it flutters amongst the shrubbery. At times, it stops to rest with its wings folded upright, and if undisturbed, can stay in that position for long periods of time. It is curious to note that the Lesser Darkwing is quite comfortable in the presence of ants and strangely, the ants do not attack the butterfly. 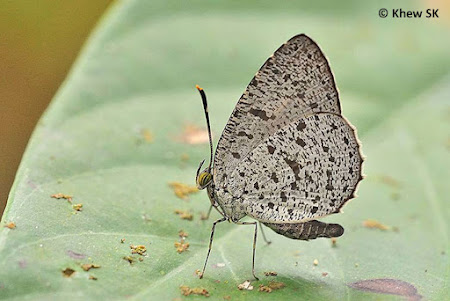 And so we end the year 2015 with a inconspicuous and modest butterfly. A new year is just round the corner, and we will be doing our usual year-end review at the end of the month whilst looking ahead to a new and hopefully more butterfly-ful year in 2016!

Posted by Commander at 3:30 PM 0 comments