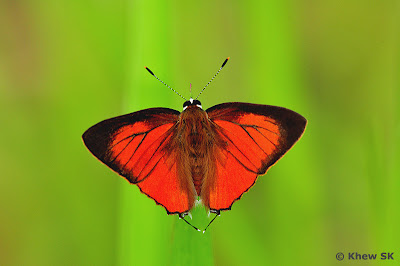 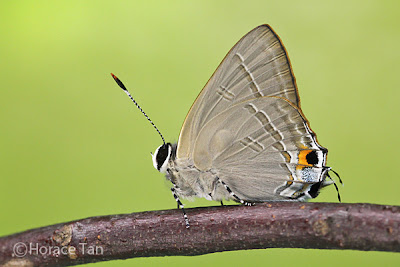 A male Common Red Flash, note the circular bulge on the hindwing, indicating the presence of the circular brand on the upperside. 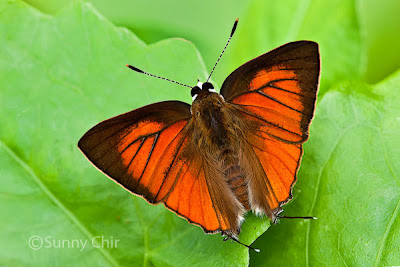 A sunbathing male Common Red Flash, note the trident mark on the forewings.

Physical Description of Adult Butterfly:
Above, the male is red to orange with dark brown costal and distal border on the forewing, veins 2, 3 and 4 of which have their bases clothed with dark brown scales, forming the so-called trident mark. In contrast, the female is a dull coppery brown throughout. As with all Rapala species, the male has a circular brand near the base of space 7 on the hindwing. Underneath, both sexes are pale greyish buff. On both wings, there is a cell-end bar and a narrow pale brown post-discal line which is whitened on the outer side. The hindwing has a prominent, tornal, black, orange-crowned spot in space 2 and a smaller one on the tornal lobe. Between the two spots, the marginal area in space 1b is covered with bluish scaling. There is a white-tipped tail at the end of vein 2. The legs are white and black-banded. 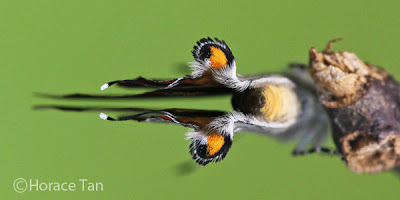 The orange-crowned spot on the tornal lobe of a Common Red Flash adult. 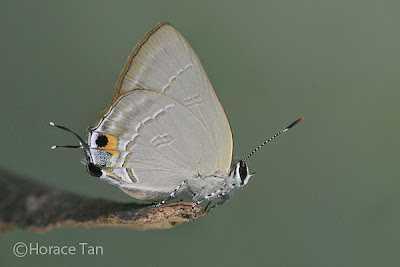 A female Common Red Flash sunbathing on a leaf perch. 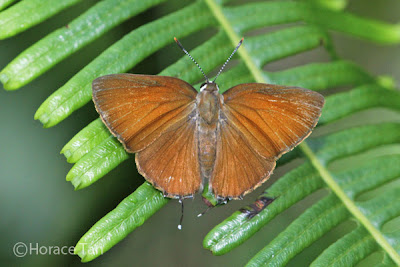 Field Observations:
This species is moderately uncommon in Singapore and its distribution is  localised to a few sites in and along the fringe of the nature reserves and a few wastelands where its host plants, Mimosa pigra and the Singapore Rhododendron,  are growing in relative abundance. Both sexes have been observed to visit flowers and  sunbathing with open-wings in later afternoon.  These sunbathing routines for the males are regularly interrupted by vigorous dog-fighting among them. 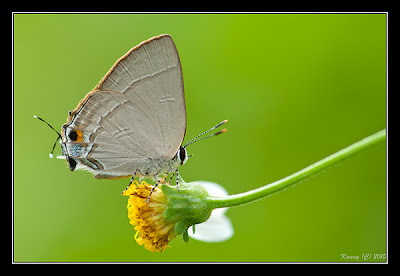 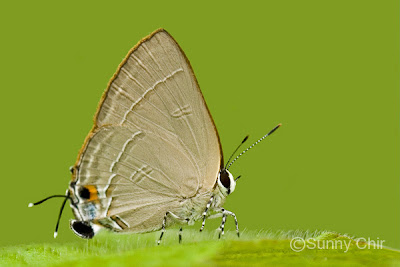 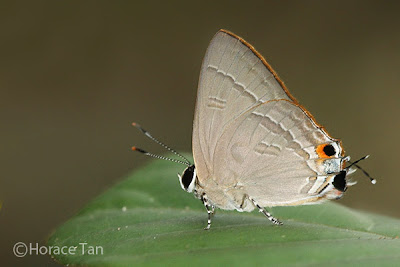 Early Stages:
The Common Red Flash is polyphagous as its early stages feed on a number of host plants from different families. Locally two plants, Mimosa pigra and Melastoma malabathricum, have so far been identified as the larval host. C&P4 also lists Nephelium lappaceum (Rambutan) and Melastoma polyanthums as hosts in the Malay Peninsula. The caterpillars of the Common Red Flash feed on the flower buds,  flowers, ripened fruits as well as young leaves of the host plants.  In the wild, the caterpillars are typically found in the company of the ant Anoplolepis longipes  [C&P4]. 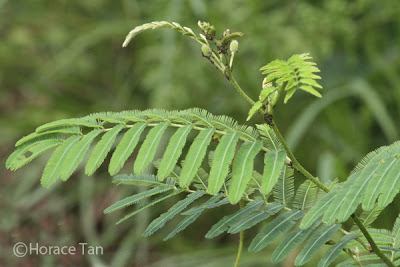 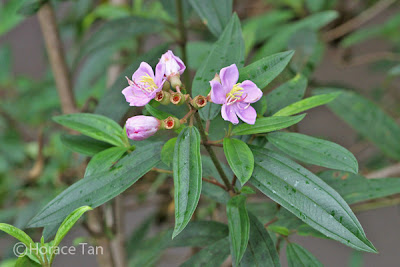 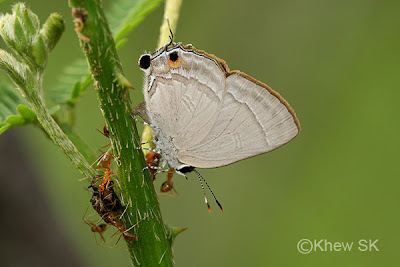 A mother Common Red Flash ovipositing on the stem of Mimosa pigra.

The eggs are laid singly on leaves, stems or young shoots of the host plants. Each egg is about 0.6mm in diameter, green in colour. It is burger-shaped with a depressed micropylar at the pole and a surface covered in a  reticulated pattern of intersecting  shallow ridges. 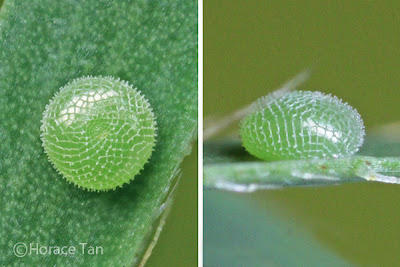 Two views of an egg of the Common Red Flash. 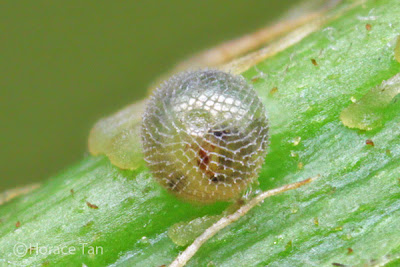 A maturing egg of the Common Red Flash. 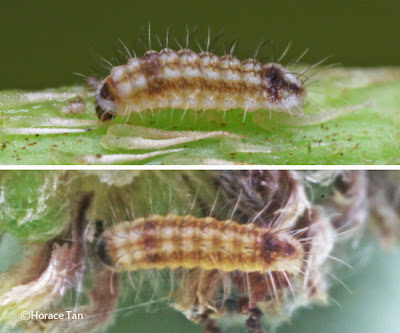 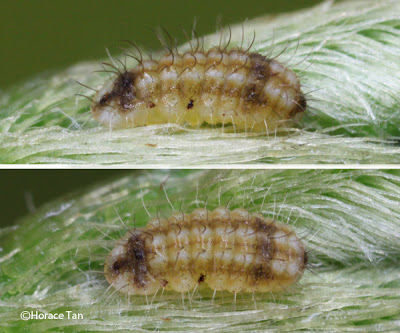 Two views of a 1st instar caterpillar, late in this instar, length: 1.9mm.. 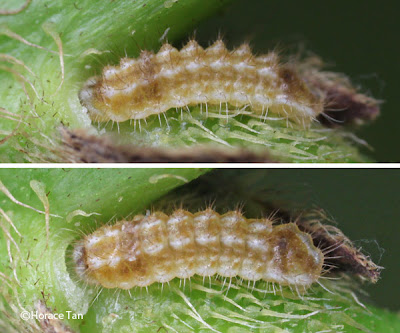 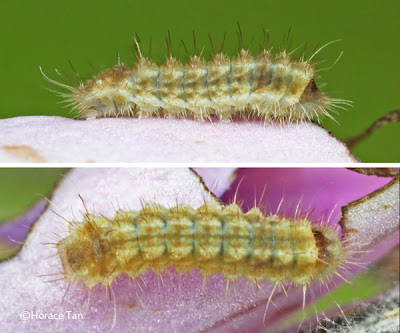 Two views of a 3rd instar caterpillar, early in this stage, length: 4.5mm

The 4th instar resembles the late 3rd instar caterpillar closely. The colour of body markings  is highly variable, ranging from green to pink and even to pale red. It seems that this coloration is closely associated with the colour of the host plant part the caterpillar is feeding on.  The 4th instar takes about 3-6 days to complete with the body length reaching 10mm. 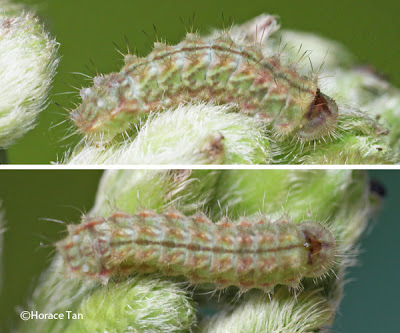 The 5th instar caterpillar has similar markings as in the 4th instar. The body base colour is pale green. There are whitish oblique dorso-lateral stripes on most body segments, and in some caterpillars, these stripes are flanked by dark  spots at their upper end. Conical projections with tuffs of setae are found dorso-laterally and laterally along the body fringe. 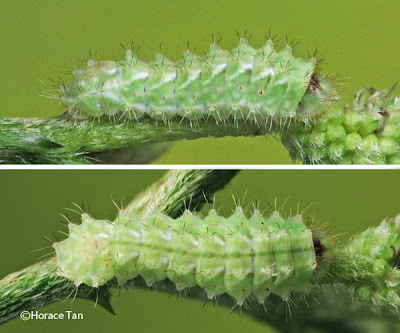 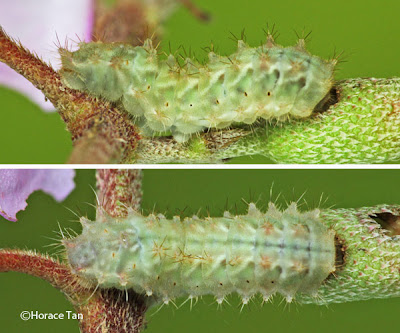 After about 5 days of feeding and reaching a length of about 16mm, the caterpillar stops food intake and wanders around for a pupation site. During this time, its body gradually shortened. In some individual the body color fades to a pale shade of green, whilst in others, the body color turns reddish to reddish brown.  At the end of this period, typically the caterpillar chooses   a concealed space in a leaf litter as its pupation site. 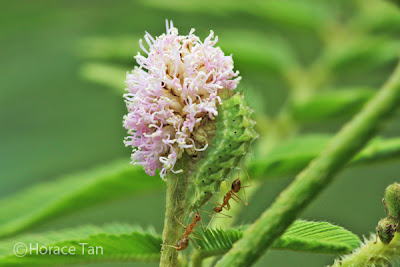 Anoplolepis longipes ants attending to a 5th instar caterpillar on a a flower bud of  Mimosa pigra.

Common Red Flash caterpillars in the company of an ant species on Mimosa pigra. 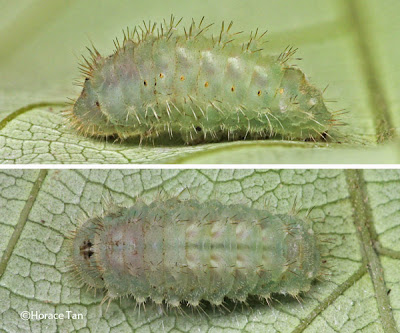 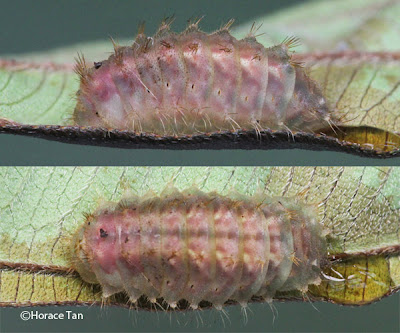 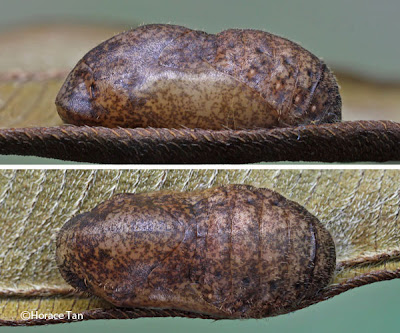 Two views of a pupa of the Common Red Flash.

Seven to eight  days later, the pupa turns rather black, first in the wing pad and thorax, then progressively in the abdomen. The presence and absence  of orange/reddish patch in the wing pads gives an early indication of the gender of the soon-to-emerge adult. The next day, the pupal stage comes to an end with the emergence of the adult butterfly. 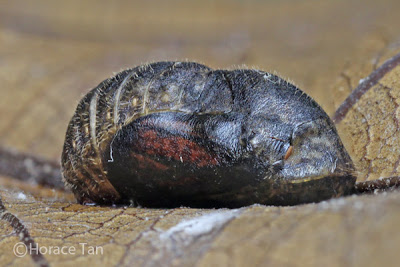 A mature pupa of a male Common Red Flash.