Butterfly of the Month - February 2014 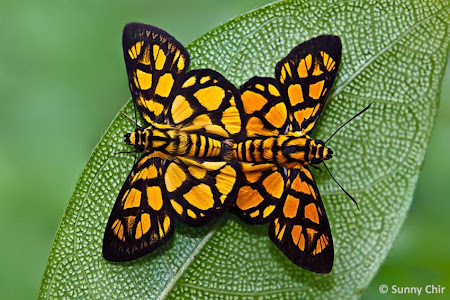 February 2014 heralded the Year of the Horse in the Chinese zodiac calendar. Unlike last year, when it was uncharacteristically wet for February, this year's weather was quite typical of the dry season, as the North East Monsoon winds waned and the rains that we experienced in the last few months of December 2013 suddenly dried up. Despite the cool north-easterly winds bringing temperatures to a low in early 2014, the exceptionally dry weather began to take its toll on the plants and greenery all around the island. Even in the forests, the leaf litter was particularly brittle and dry whilst the trees and shrubbery appeared limp and listless. 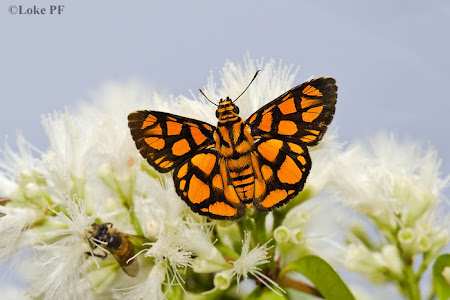 The National Environment Agency warned of imminent haze and poor air quality as the number of hotspots in neighbouring Indonesia increased alarmingly. Typical of the way the Indonesian farmers clear their agriculture land, it has been almost a yearly affair that the wanton burning of forests to clear land for farming will send plumes of choking smoke over to Malaysia and Singapore. The Indonesian authorities appear almost powerless to stop this pollution and environmental abuse as fires burn uncontrollably in their country. 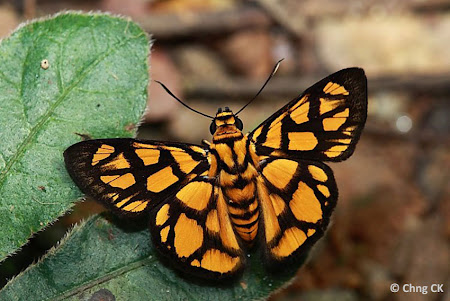 I always wonder how much more of this can Mother Nature take, before she unleashes her wrath at those people who insist on destroying nature around them - solely for monetary gain and little else. We share this planet with the flora and fauna around us, and humans, being the most intelligent of all the creatures that inhabit our Earth, is by far also the greatest destroyers and consumers of our natural resources. 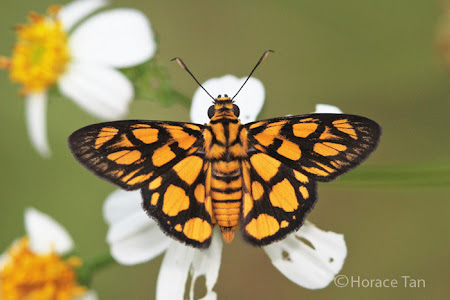 Over here in Singapore, the first two months of the year saw a curious number of unprecedented breakdowns in the MRT system. Some were reported to be due to "human error" and is some cause for concern, as the system has been running for so many years with very few breakdowns in the early years of the system, only to see "human errors" creeping into the operations? There appears to be some systemic issues that the SMRT needs to get a handle on these days before things get any worse. 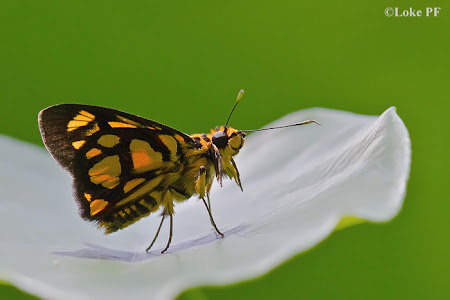 A number of high profile fatal accidents at construction sites also plagued the industry. Usually, upon investigations, the conclusion is often that the accident could have been avoided, or prevented. Are contractors throwing caution to the wind as far as safety is concerned, for the sake of economic returns? Or is the pressure of ever-tighter deadlines and schedules forcing the workers to take short cuts just to speed up the work? Are developers imposing unrealistic deadlines on their projects, so that they can start getting returns on their investments?  Whatever the reasons are, when a worker dies at the site, someone, somewhere else in the world has lost a son, a father or a husband. Let us remind ourselves that it is not just a statistic on a piece of paper. 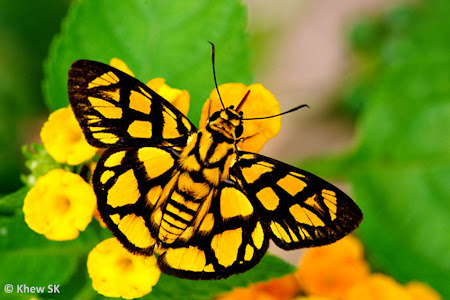 This month, we feature a Hesperiidae, commonly called Skippers from the subfamily Pyrginae, which are collectively called "Flats".  This subfamily features species that are robust-bodied, fast-flying butterflies that tend to stop with their wings opened flat, even when feeding or sunbathing. February's Butterfly of the Month is the Hieroglyphic Flat (Odina hieroglyphical ortina). 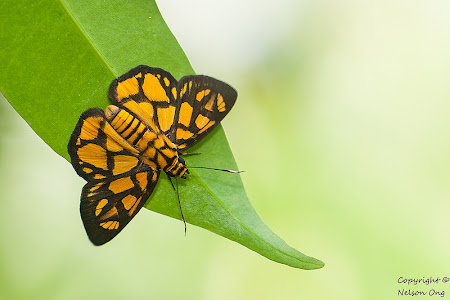 Skippers are usually drab, brown coloured butterflies with large eyes and fat bodies. To the uninitiated, they are usually mistaken for moths. However, there are exceptions to these often unappreciated butterflies like the Hieroglyphic Flat, which are relatively more colourful and eye-catching. Over in South America, the Hesperiids are even more spectacular - with iridescent blues and long tails! 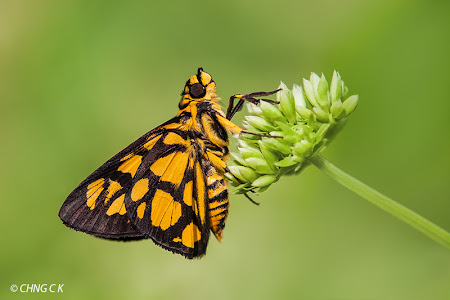 The male Hieroglyphic Flat has yellow-orange patches framed by thick black lines on both wings. Females are paler yellow and appear more faded in colour than the male. The underside markings are similar to the upperside, but often paler in colour. The abdomen is striped with black. There are obscure arrow-shaped marginal markings on the upperside of the forewings near the apical area. 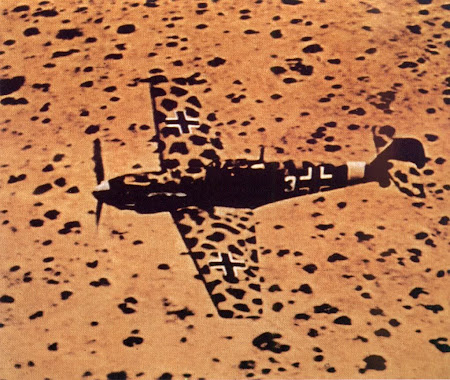 This skipper is quite distinctive-looking and cannot be mistaken for any other butterfly species in Malaysia or Singapore. The cryptic patterns are reminiscent of the camouflage paintwork of a German Messerschmitt ME Bf 109 fighter plane in Hitler's desert campaign during World War II. I've often been asked what an ME Bf 109 with desert camouflage looks like, so here it is! Can you see the resemblance? But whether the Hieroglyphic Flat's colours provide it with any form of camouflage in our forests is debatable. 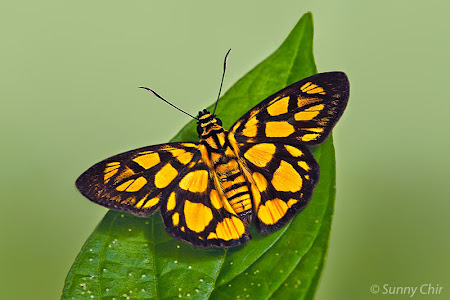 The Hieroglyphic Flat is a fast flyer and in some locations, two or more individuals are sometimes observed dog-fighting at the tree tops, vying for the best perch to sunbathe themselves. A common trait with most of the "Flat" species is that they will fly around rapidly, then perch on the undersides of leaves with their wings opened flat to rest or hide from intruders. 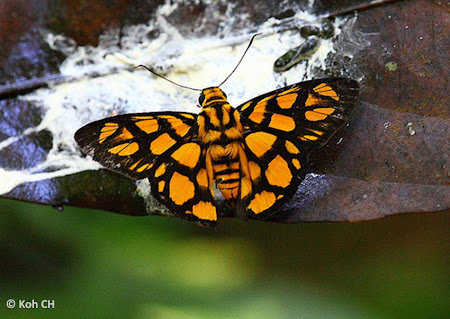 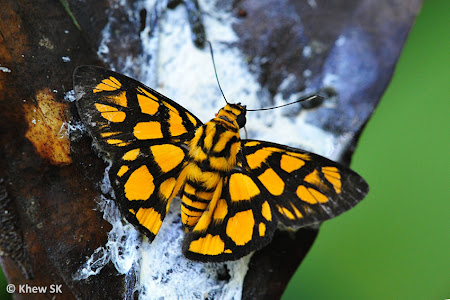 In the forests, the species is often observed puddling on bird droppings. It will repeatedly return to the bird dropping even when disturbed, and then feed greedily, giving a good opportunity to photograph it. It has occasionally been seen puddling at sandy streambanks and footpaths in the forests as well. The Hieroglyphic Flat has a wide distribution and can be seen at urban parks and gardens as well as in the forested nature reserves. 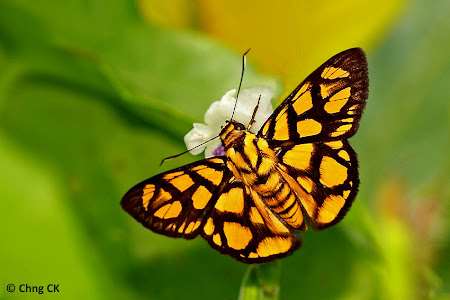 The early stages of this skipper has been recorded and documented here. The caterpillar host plant is Erycibe tomentosa, which is a woody climber and can locally be found on hedges, edges of forests and sides of forest trails, in areas such as the Central Catchment Area and Southern Ridges. 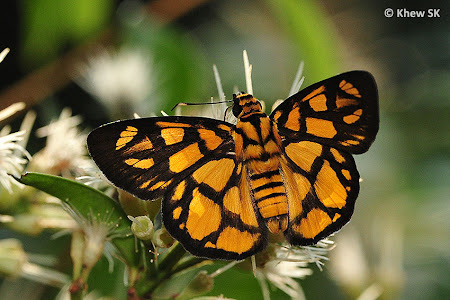