Life History of the Pitcher Blue 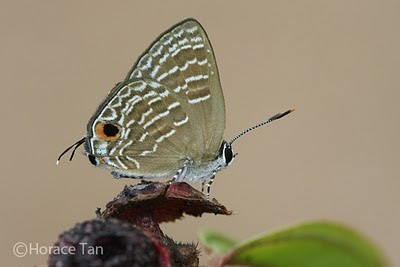 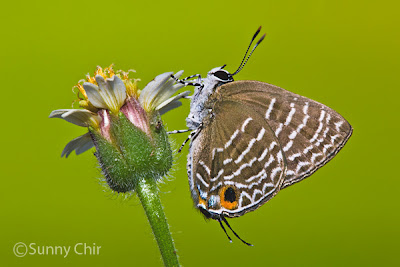 An adult Pitcher Blue perching on a wild flower in an open field in Southern Ridges. 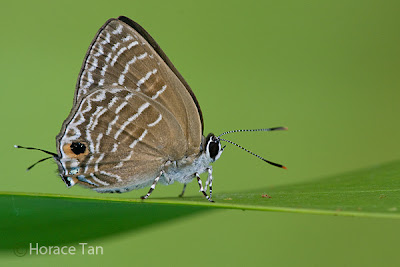 A male Pitcher Blue on a perch.

A female Pitcher Blue on a leaf perch.

Physical Description of Adult Butterfly:
Above, the male has its forewing mostly black with a small basal patch of shining blue at the dorsum, its hindwing mostly shining blue with a black costal border and a pale brown dorsum. The female is duel pale blue with broad brown borders on both wings. Beneath, the wings are pale brown and marked with white striae in similar arrangement as for the Four-line blues (pavana group of Nacaduba spp.) but without basal striae in the hindwing. Each hindwing has a small tornal lobe, a prominent subtornal orange-crowned black spot in space 2, blue and green metallic scales in space 1b and a white-tipped filamentous tail at the end of vein 2. 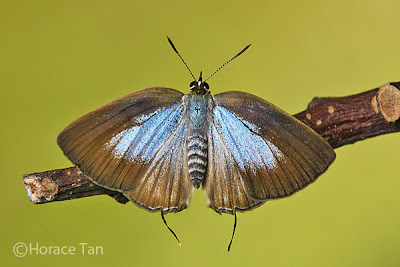 The upperside of a female Pitcher Blue. 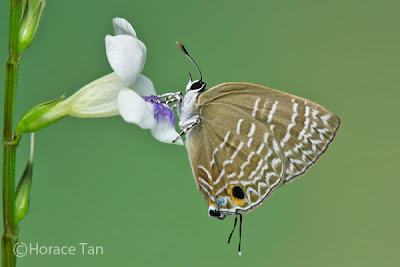 A female Pitcher Blue checking out a flower of the Common Asystasia.

Field Observations of Butterfly Behaviour:
The Pitcher Blue is rarely seen in Singapore due to the loss of habitat for its larval host plants to various industrial, commercial and housing development projects in the past decades. In recent times, the adults have been sighted rather infrequently in locations where small pockets of pitcher plants remain. Such sites include parts of the nature reserves, Southern Ridges and other scattered wastelands. The adults are fast fliers. They usually stay high up in the trees and only make occasional visits to flowers in the vicinity. With luck and perfect timings, a keen observer can find females making oviposition visits to seed pods of the pitcher plants. 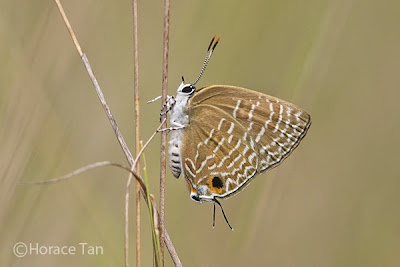 A female Pitcher Blue sighted making a brief stop-over in a wasteland. 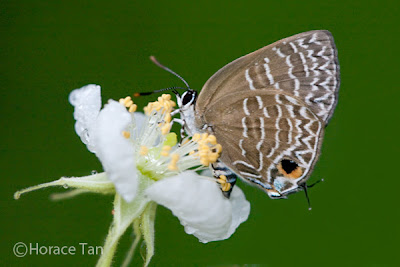 A female Pitcher Blue on a flower of Buah Cheri (Muntingia calabura). 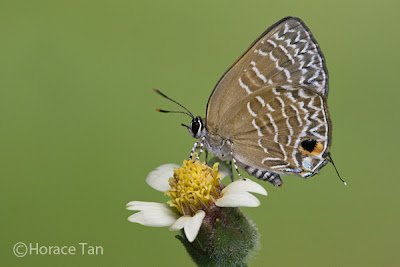 A female Pitcher Blue perching on a flower.

Early Stages:
Of the two Nepenthes spp. recorded as local larval hosts, N. gracilis, is found to be more commonly utilized by the Pitcher Blue as it occurs in much greater numbers than N. rafflesiana in their common habitat. N. gracilis is shrubby with alternate leaves and climbs with twisting leaf-tendrils. A fully formed leaf composed of a petiole, a lanceolate or linear leaf blade, a tendril and a tubular pitcher which has a lightly swollen and shortly incurved base. The pitchers are typically green with occasional reddish tinge. The flowers occurs in racemes and the fruits in capsule form (seed pods). 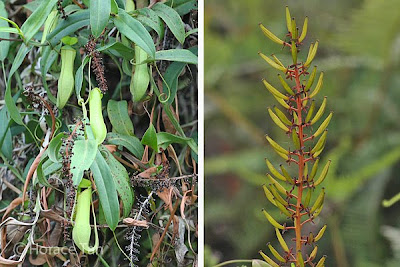 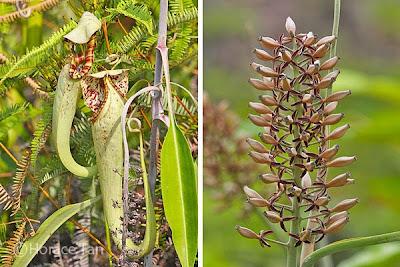 The caterpillars of the Pitcher Blue feed on the maturing seeds within a seed pod after gaining entry through a hole bored on the side of the pod. When their body size allows, especially during first three instars, they will stay within the confine of the pod and devour all its contents. The act of boring into a pod and eating its contents is repeated many times during the larval stage. Moulting invariably takes place within a seed pod. 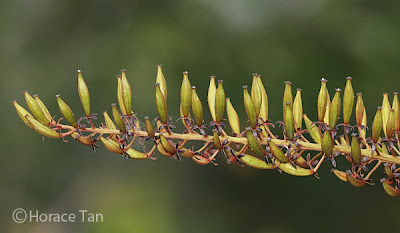 Several eggs of the Pitcher Blue found on one single fructescence of N. gracilis..
Look for a white dot on the tip of a seed pod.

Eggs of Pitcher Blue are typically laid singly, and rarely in pairs or triplets, on the stigma remnant of a seed pod. At times, eggs are laid at the lower portion of the seed pod near the calyx. It is not uncommon to see multiple egg-bearing seed pods on one single fructescence. 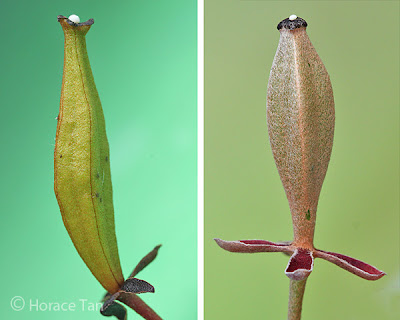 Empty egg shells on the stigma remnant of seed pods. Up to 3 eggs have been found
on a single pod.

The small egg is dome-shaped (about 0.8-0.9mm in diameter) with a depressed micropylar. The surface is covered with a reticulated pattern of intersecting raised ridges. When freshly laid, the egg is whitish with a yellowish green undertone. 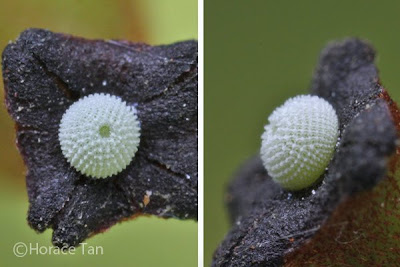 Two views of an egg of the Pitcher Blue. Diameter: 0.8mm. 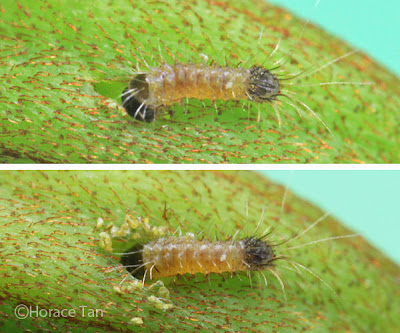 The newly hatched makes its way to the side of the egg-bearing seed pod and starts to bore into it. It stays within the seed pod and feeds on the developing seeds. After about 2 days of growth, it reaches about 3.5mm in length. It then lies dormant within the seed pod for its moult to the 2nd instar. One seed pod is usually sufficient to last the entire 1st instar. 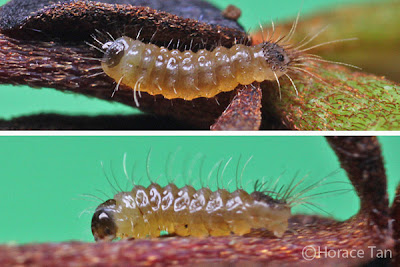 Two views of a 1st instar caterpillar, day 2 in this stage, length: 2mm. 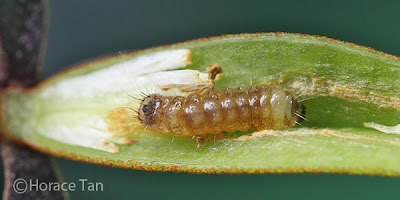 Two views of a 1st instar caterpillar in a seed pod with content nearly all eaten.
The pod was peeled opened to reveal the caterpillar. Length: 3.2mm.

Life History of the Pitcher Blue. Part 1 of 3: Egg to late 1st instar.
Covered with numerous dark setae, the body of the 2nd instar caterpillar is brown to reddish brown in color with moderately longer setae running laterally. The head capsule is yellowish brown in colour. The dark brown to black prothoracic shield is rather prominent, resembling a triangle with a long base and short height. The body is still more or less cylindrical with larger anterior segments. The growth in this stage brings the caterpillar to a length of about 5.5-6.0mm, and after about 2 days in this stage, it moults again. 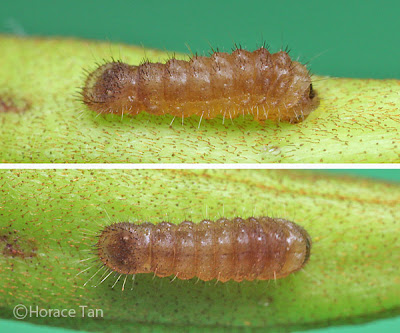 Two views of a 2nd instar caterpillar boring into another seed pod, early in this stage, length: 4mm. 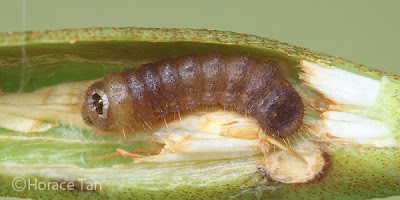 A 2nd instar caterpillar in a seed pod, late in this stage, length: 6mm.

The 3rd instar caterpillar has numerous short and fine body setae, again with longer setae laterally. The head capsule is yellowish brown. The large and prominent prothoracic shield is more angled and comes with a little tooth at its base. The base body color is reddish brown but with lighter coloration on the dorsum of middle body segments. The 3rd instar takes about 3 days to complete with the body length reaching about 9mm before the next moult. 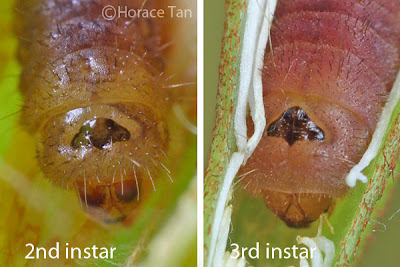 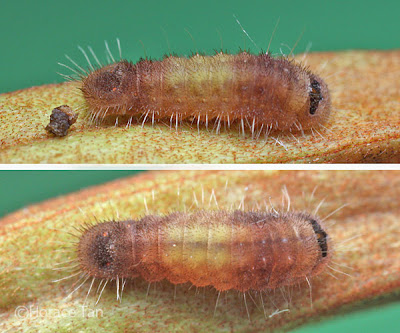 Two views of a 3rd instar caterpillar boring into a seed pod. early in this stage, length: 5mm. 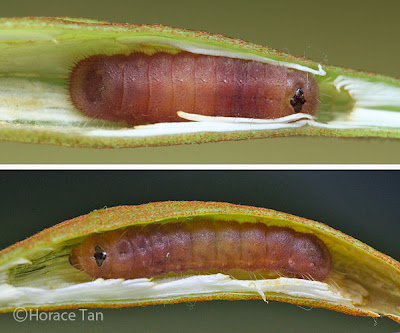 As in the 3rd instar, the 4th (and final) instar caterpillar has numerous body setae and long lateral setae. There are also two rows of long setae occuring dorso-laterally. The body color is reddish brown to wine red. 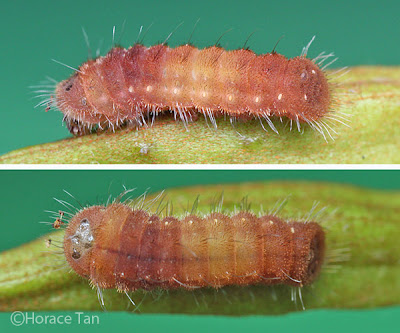 Two views of a 4th instar caterpillar boring into a seed pod, early in this stage, length: 8mm. 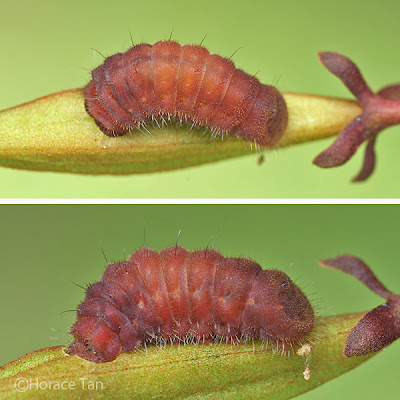 Two views of a 4th instar caterpillar boring into a seed pod, midway through this stage, length: 12mm.

One prominent change from the 3rd instar is seen in the prothoracic shield which has now become pale yellow in base colour with small black spots lying within and large black spot in its four corners. The dorsal nectary organ is rather prominent. It is functional as ants have been observed to attend to it for caterpillars found in the field. 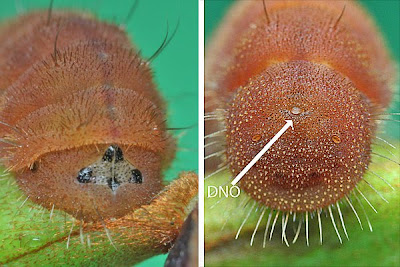 The prothoracic shield (left) and the dorsal nectary organ (right) of a 4th instar caterpillar. 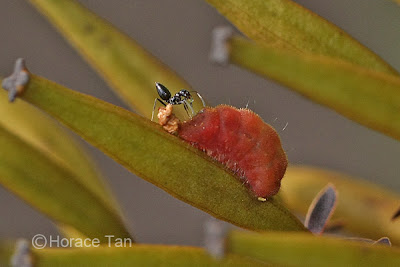 A 4th instar caterpillar attended to by an ant in its natural habitat.

On the last feeding day in this instar, the first two thoracic segments and 3rd to 5th abdominal segments becomes lighter in coloration (shades of yellow, orange and even beige), giving the caterpillar a distinct banded appearance. 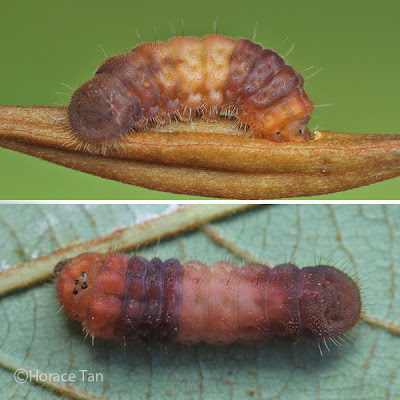 After 4-5 days of growth and reaching a maximum length of around 15-16mm in the final instar, the body of the caterpillar gradually shrinks. The caterpillar ceases eating and wanders around for a pupation site. All bred specimens chose to enter their pre-pupatory phase on a spot of the leaf surface within a gape in a pile of leaf litter. At the chosen site, the caterpillar readies itself for pupation by spinning a silk girdle and a silk pad. In the wild, some caterpillars even choose to pupate within a pitcher. 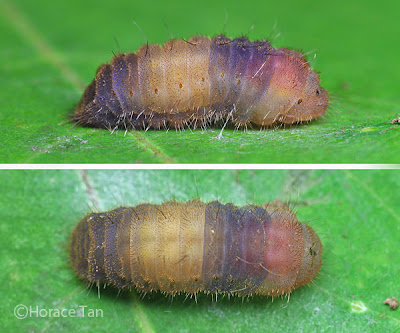 Two views of an immobile pre-pupatory larva of the Pitcher Blue,
The silk girdle can be easily seen.

Pupation takes place after one day of the pre-pupal stage. The lightly hairy pupa has the typical lycaenid shape, light brown in base colour with variable number of black to dark brown patches on the pupal surface. The pupa of Pitcher Blue has silk girdles and is equipped with cremastral hooks to secure it to a silk pad on the substrate. The pupa has a length of about 9-10mm. 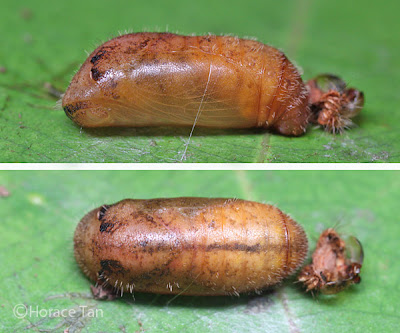 Two views of a pupa of the Pitcher Blue, length: 9.5mm

Eight days later, the pupa becomes darkened in color signaling the imminent emergence of the adult. Patches of green and blue can be seen in the wing pads through the now transparent pupa skin. The next day the adult butterfly emerges from the mature pupa. 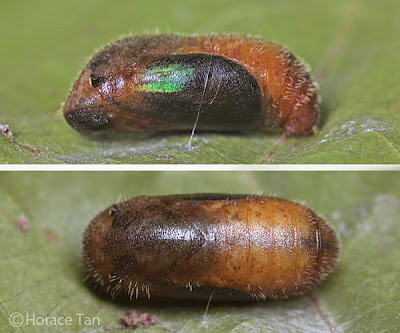 Two views of a mature pupa of a male Pitcher Blue.

Life History of the Pitcher Blue. Part 3 of 3: Pupation and Eclosion. 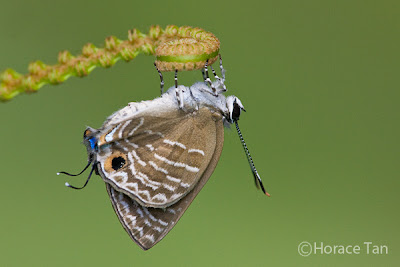