Awls of Singapore : Part 1
Featuring the Awl skippers in Singapore 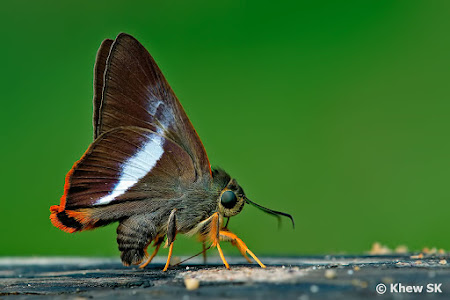 A Orange Tailed Awl puddles on a damp timber plank


This weekend's blogpost takes a look at the various butterfly species that carry the English common name "Awl". The name Awl usually refers to a group of Hesperiidae (Skippers) that are medium-sized, robust-bodied butterflies classified under the sub-family Coeliadinae. In Singapore, the Awls come from three main genera - Badamia, Bibasis and Hasora. 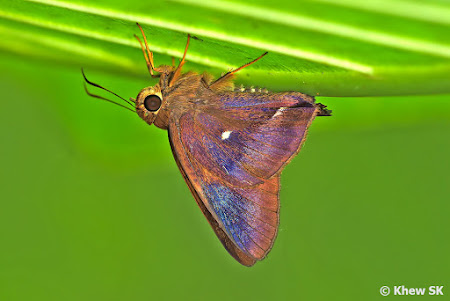 A Common Awl perches in its typical under leaf pose


I did a word search to investigate the background of the name "Awl" and to look for the possible theories as to why this name was chosen for these butterflies. Invariably, the majority of online dictionaries define awl as a "A small pointed tool used for piercing holes, especially in leather." It is therefore interesting to consider why a butterfly is associated with a pointed tool for its common name! 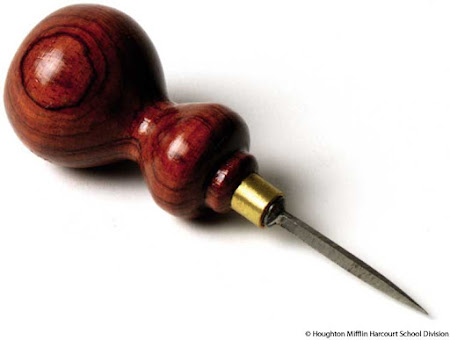 Firstly, is it perhaps the broad bodies of the butterflies and sharply pointed wingtips that gave the early authors the idea that these species are reminiscent of the pointed tool? Or did these authors originally intending to name these butterflies after the bird "Owl" instead? There could always be a possibility that this name was misspelt as Awl? The group of butterflies are known to be crepuscular (active in the dim light in the dawn or dusk hours of the day), and hence could have been associated with nocturnal owls instead? 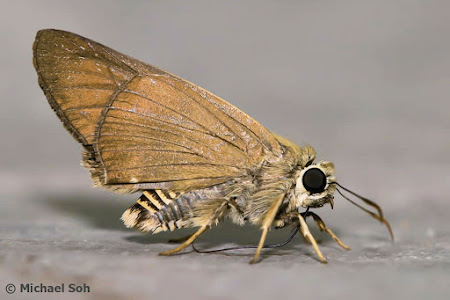 A Brown Awl extends its long proboscis to feed

It is not common to come across butterflies named after inanimate objects as its common name. In many of my discussions on the English or vernacular common names of butterflies, they are named after birds, animals, colour, people, behaviour, ranks, etc., but names after objects are few and far in between. We will never know for sure, the reasons why the early authors referred to these species as "Awls", but it can always be an interesting subject for debate! 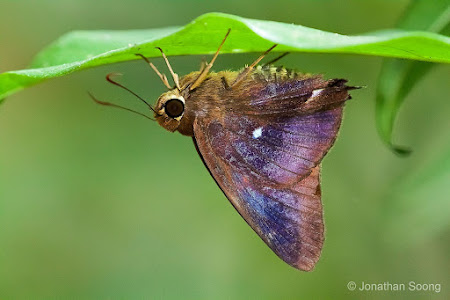 This two-part blog article takes a look at the seven extant species of Awls in Singapore, with Part 1 showcasing three of the seven species. Amongst the butterflies called Awls, five are under the genus Hasora, and one each from the genus Badamia and Bibasis. 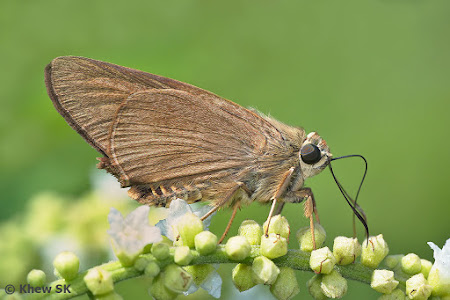 A Brown Awl feeding on the flower of the String Bush

The first of the Awls is a single genus-single species representative butterfly in Singapore. Globally, there are only two known species in the genus - the other being Badamia atrox, that flies in the islands of New Caledonia and Fiji. The Brown Awl has a large geographical range, starting from India at its western-most range, stretching all the way to Japan in the north-east and Australia in the south-east extremity of its range. In Singapore, the Brown Awl appears intermittently throughout the year, and can be found in the nature reserves as well as urban parks and gardens. 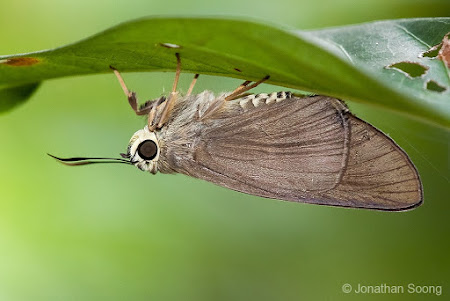 The Brown Awl is a medium brown on the upperside, with elongate white hyaline streaks on the forewing in the female. These streaks are near-obscure in males of the species. The wing bases are greyish-green on the upperside. The underside is a drab greyish-brown and unmarked. The abdomen of the butterfly is striped brown and yellow. The wing shape of the Brown Awl is uniquely elongated with the hindwing strongly caudate, giving it a silhouette of a stealth bomber. 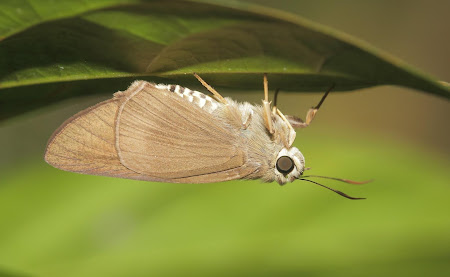 The Brown Awl is moderately rare and is usually encountered singly. It has a habit of hiding under leaves with its wings folded upright. It is skittish and a fast flyer. The species has been successfully bred on two caterpillar host plants in Singapore - Combretum sundaicum and Terminalia calamansanai. 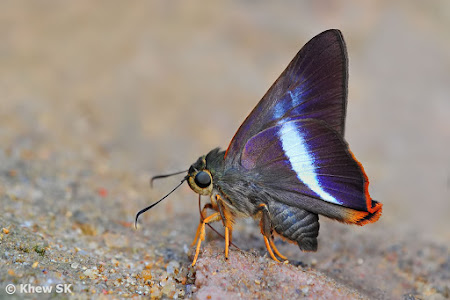 An Orange Tailed Awl puddling at a sandy streambank

The Orange Tailed Awl is rare, and a new discovery for Singapore when it was first observed in the forested nature reserves of Singapore. Subsequently, the caterpillars of the species were found in numbers in the Singapore Botanic Gardens on Hiptage benghalensis. However, the adult butterflies are still rarely seen, perhaps due to its crepuscular habits. 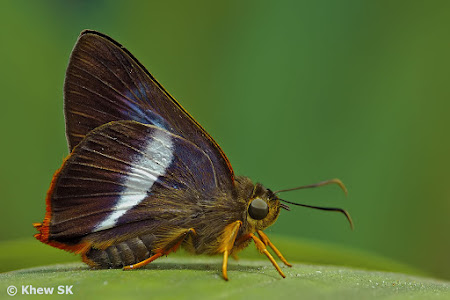 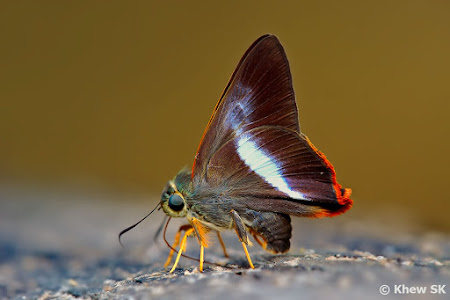 The Orange Tailed Awl is dark brown on its uppersides and unmarked. The wings are long and angular with the hindwing tornal cilia a deep orange yellow in pristine individuals. The underside has a broad white discal band on both wings and a purple-blue sheen. The hairs on the legs of the butterfly are orange yellow. 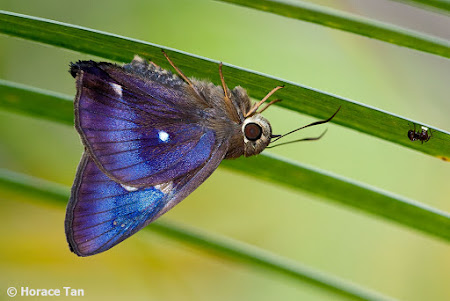 A Common Awl perches on the underside of a palm frond

The Common Awl is a relatively widespread species in Singapore, and has been observed in urban parks and gardens as well as the forested nature reserves. It is one of five species in the genus Hasora. It is also closely associated with the mangrove and back-mangrove environments where its caterpillar host plant, Derris elliptica, grows wild as a creeper. It tends to prefer shaded habitats and has a habit of flying rapidly and then settling with its wings folded upright on the underside of a leaf to hide itself. 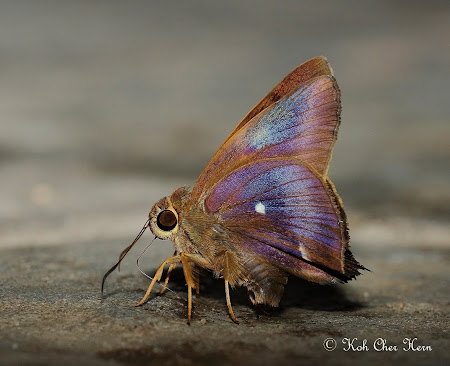 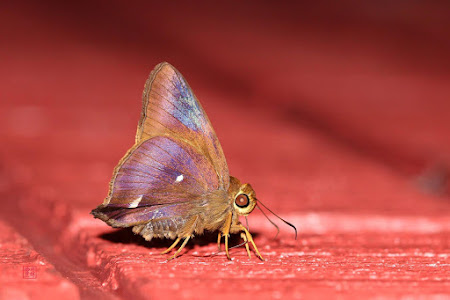 The Common Awl is often encountered puddling at footpaths, bird droppings, damp tree trunks and in the case of the last photo, even on damp brick walls!

The male Common Awl is dark brown above with the wings usually unmarked, although in some individuals, small sub-apical spots may be present. The female has three large pale yellowish sub-apical spots and large hyaline spots in the cell area of the forewing. The underside is brown with a light purplish glaze with a prominent circular white spot in the cell of the hindwing. When photographed with a flash, the purple glaze is enhanced, bringing out a strong purple blue sheen that is not usually seen in natural light.

In the next part of the Awls of Singapore, we take a look at the remaining four Awls that are extant in Singapore, all of which belong to the genus Hasora.

Posted by Commander at 8:34 PM 0 comments