Another Re-Discovery for Singapore!

ButterflyCircle Records another Re-Discovery for Singapore!
The Moth Butterfly 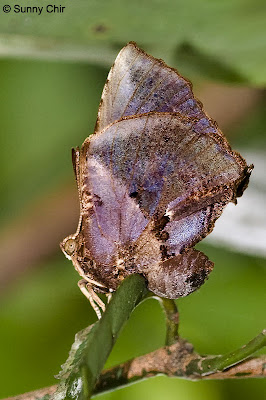 ButterflyCircle member Sunny Chir was out on his usual hunts in Singapore's nature reserves and was chasing a skittish Bamboo Tree Brown when this unusual deformity flew and perched nearby. After getting a few record shots and maneuvering for a better position, the unidentified took off erratically.
When he posted the shot, it raised a few eyebrows, but the initial thought was that this was just a deformed butterfly (or moth). Then entered our veteran butterfly expert from Koh Samui, Les Day, who suggested that it could be a Moth Butterfly (Liphyra brassolis abbreviata). A few clicks of the mouse on the usual Internet search engines (isn't technology great?), and we found several sites which featured pictures of the species that matched what Sunny shot.
So we welcome species #293 (the total number on the Singapore checklist is still be sorted out with a few previous finds yet to be validated) to Singapore. It was recorded in the checklists of the early authors and the two definitive references for the Malaysian and Singaporean butterflies, "Butterflies of the Malay Peninsula" and "Butterflies of West Malaysia and Singapore" both recorded Liphyra brassolis abbreviata to be extant in Singapore.
Thus far, it has not been seen - until now in May 2009, that it has been spotted and recorded with a high level of certainty. 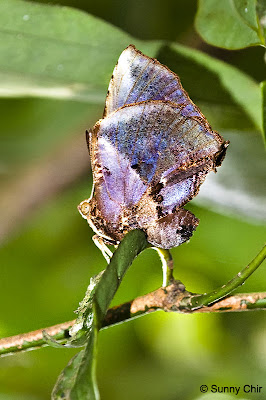 The Moth Butterfly as Liphyra brassolis abbreviata is called belongs to the subfamily Miletinae of the family Lycaenidae. It is described as "of very large size, stout build and moth like appearance. The palpi are very small, and the proboscis is wholly atrophied, so that the adult cannot feed".
The wings of the Moth Butterfly are brownish orange with black distal spots and borders on both wings. In the male, the borders are much broader. The undersides are paler and browner with the markings obscure. The species is crepuscular, and the flight is erratic and moth-like.
The caterpillar of the Moth Butterfly is carnivorous, like the majority of the species in the sub-family Miletinae, and in Malaysia and Singapore, is known to feed on the larvae of the Weaver Ant, Oecophylla smaragdina, better known locally as the Kerengga ants. The caterpillar lives in the nests of the ants, feeding off their young. As it features a smooth, elliptical shape, with a rim around the periphery, giving it an almost "tank-like" armour which protects the caterpillars from the ants. Pupation also takes place in the ants' nest in a hardened skin which serves again as an armoured carapace for the pupa. The wings and thorax of the newly eclosed adult butterfly are covered with loose white scales, whilst the abdomen is covered with buff-coloured filamentous scales both of which are used as a protection against the ants, whose antennae, mandibles and legs are enmeshed with the scales. Thus distracted, the ants busy themselves with removing these obstructions from themsleves, the butterfly crawls out of the nest and makes its escape to freedom.
This site by Kudo Seiya shows pictures of the early stages of the Moth Butterfly and also shots of the adult butterfly.
The video below (link provided by Keith Wolfe of USA) shows the amazing adaptation and survival techniques of how the caterpillar protects itself from any attack by the ants, whilst helping itself to the ants' larvae!

After all this time, we now know for certain that this very rare species of butterfly still exists in little Singapore!
Text by Khew SK : Photos by Sunny Chir
References & Acknowledgments :

Posted by Commander at 7:40 PM 5 comments