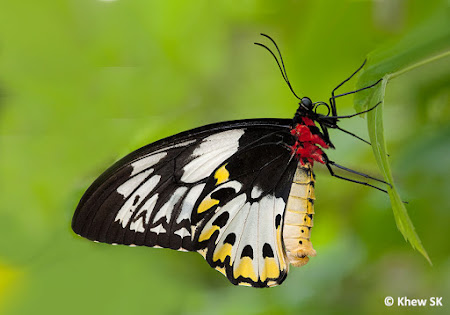 
In a previous weekend's blog article, we took a look at the literature available (or lack thereof) on Bornean butterflies. This weekend, we shift our attention to the 14th largest country in the world, in terms of land mass. Amongst the ASEAN nations, Indonesia is the largest country amongst the 10 southeast asian countries. Indonesia is the 4th most populous country in the world, after China, India and the US. 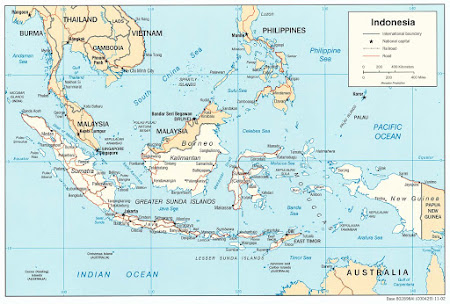 The largest archipelago in the world, Indonesia has about 1,919,000 sq km of land mass


Given the land mass of 1.9 million sq km (or about 3.5 times the size of Thailand), and the very diverse ecosystems and habitats of its 17,000 islands, any effort to document the butterflies of the entire country would be almost a superhuman feat! Hence it is not surprising that no researcher has ever attempted a comprehensive book covering all of Indonesia yet! It is with this background that Pisuth Ek-Amnuay's Butterflies of Thailand (two editions) should be lauded for the author's effort to document Thailand's butterfly fauna, as writing a book that covers over 1,000 species would certainly not have been easy. 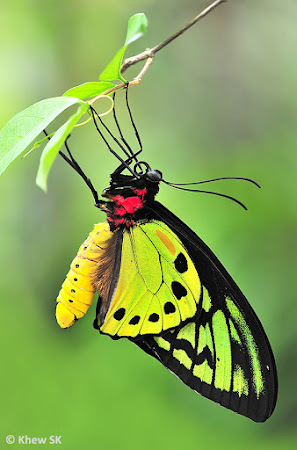 Indonesia has an estimated number of 2,500 species of butterflies, or about double the number of butterfly species found in Thailand or Malaysia! It is home to many endemic species, some of which are so unique and beautiful, they should rightfully be also given protection status under the CITES list. Many of the larger species of swallowtails and birdwings found in Indonesia are amongst the largest butterfly species found in the world. 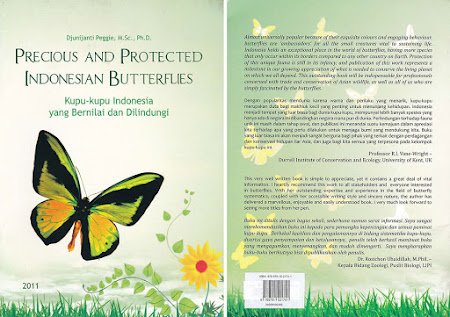 This article takes a look at two (out of four) books authored by Dr Djunijanti Peggie, which introduces a selective sample of butterflies found in Indonesia. The first book is entitled "Precious and Protected Indonesian Butterflies". This book basically features some CITES-protected species, particularly the Ornithoptera, Trogonoptera and Troides butterflies found in Indonesia. Several of these species are endemic to the country. 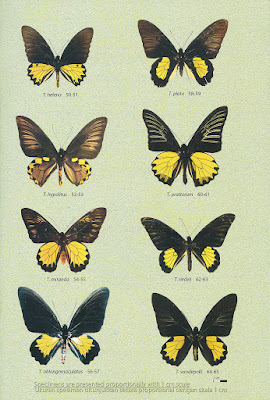 The format of the book, in B4 dimension, is clean and easy to read. Written in English and Bahasa Indonesia, the book is targeted at both the local Indonesian enthusiasts as well as international readers. Due to the small number of species featured, a nice visual quick index to the species helps to orientate the reader to the butterflies featured in the book. 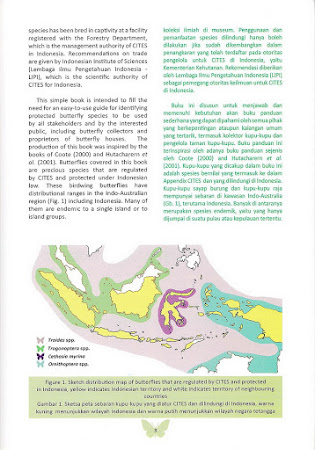 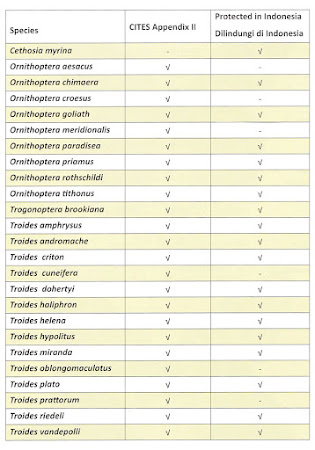 The CITES list of the butterflies featured in Dr Peggie's book

The introductory section of the book efficiently summarises the Indonesian bio-geography and where the featured butterflies can be found. This section covers a short introduction to butterflies, nomenclature, handling collected specimens, butterfly morphology and terminology and some distinguishing features of each species. A list of of the species protected under CITES Appendix II is also included. 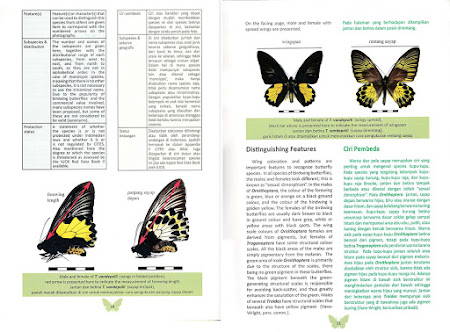 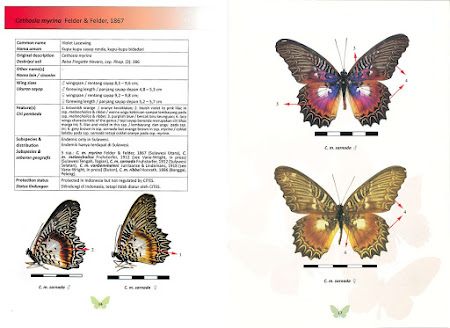 The remaining pages of the book shows a double-spread of each species with useful data on the common and scientific names, wing dimensions, distinguishing features, distribution and protection status. Only photos of collected and set specimens accompany the write ups. But these are very useful to allow the reader to view the upper and underside of each species, and male/female photos also highlight the sexual dimorphism amongst these species. 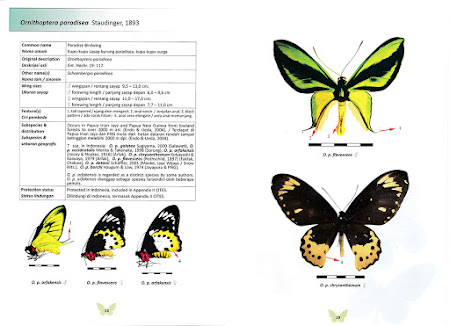 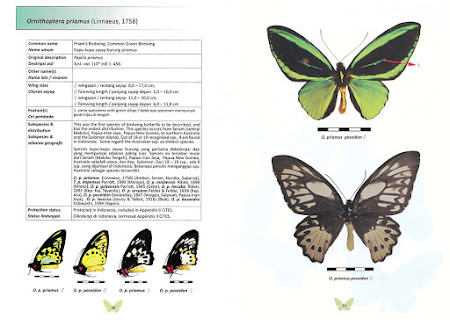 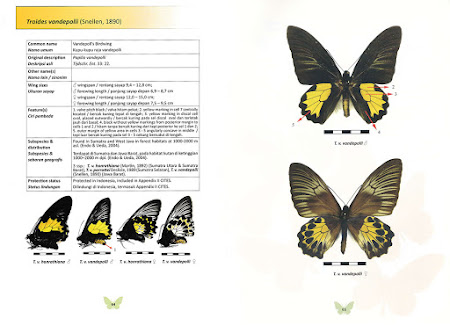 Specific distinguishing features of each species highlighted in the text are also annotated on the photos to visually show these features. Annotations by numbers is also helpful to guide the reader to understand the corresponding descriptions in the text box. A centimeter ruler is added under each butterfly specimen to help give an approximate scale to the photo and an indication of its wingspan. 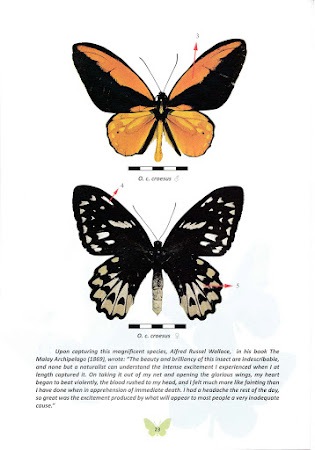 Wallace's Golden Birdwing (Ornithoptera croesus), a spectacular species that was first described by Alfred Russel Wallace in 1859 and had a prominent mention in his book, the Malay Archipelago. This species is endemic to northern Maluku.

This 72-page book provides a good introduction to some of Indonesia's most spectacular butterflies. The book is simple and well-organised, with the key information and photographs effectively laid out to present the maximum information without any distracting clutter. The synopsis on the back cover of the book is written by Prof Dick Vane-Wright of the UK. 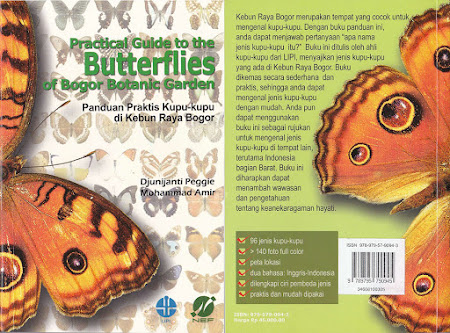 The second book, co-authored by Dr Peggie with Mr Mohammad Amir, is a small pocket-guide entitled "Practical Guide to the Butterflies of Bogor Botanic Garden". This guide book features a total of about 96 species of butterflies found at the Bogor Botanic Garden, which covers about 87 Hectares in Bogor City in western Java. This botanic garden is apparently initiated by Sir Thomas Stamford Raffles some time in the early 19th Century. 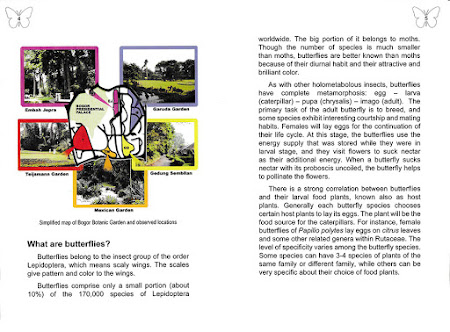 A diagrammatic location map of Bogor Botanic Garden shows the various sub-gardens where the species featured in the book were observed.

The pocket guide is also bi-lingual in English and Bahasa Indonesia. A few quick introduction-to-butterflies pages precede the main species pages. There is also a short section about Bogor Botanic Garden with a diagrammatic map of the gardens and some specific areas within the premises where the butterflies were observed. 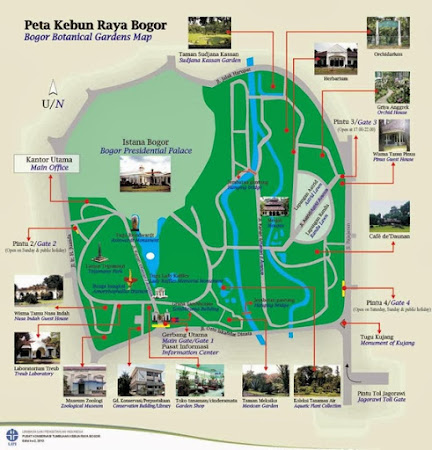 A location map of Bogor Botanic Gardens.  The garden is about an hour's drive from Jakarta, the capital city of Indonesia

The species pages are organised by taxonomic families of butterflies, with the exception of Riodinidae, which is not found in Bogor Botanic Garden. Details of host plants, distribution, and some description of the butterfly are included for each species. There is a small pictorial diagram of Bogor Botanic Garden on each page to depict the locations where the species was observed within the garden. 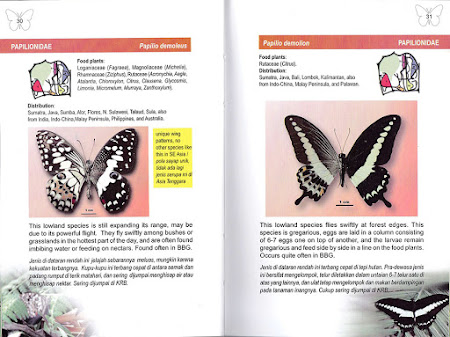 Each species photo is of a set specimen with the upper/underside cut into half and digitally "sewn together" to depict the butterfly in one photo. This is useful to save space and keep the book concise and affordable. Description of the butterfly behaviour and other notes of interest are included. Photos of the species in the field, where available, are added to the bottom part of the page to complement the species described. 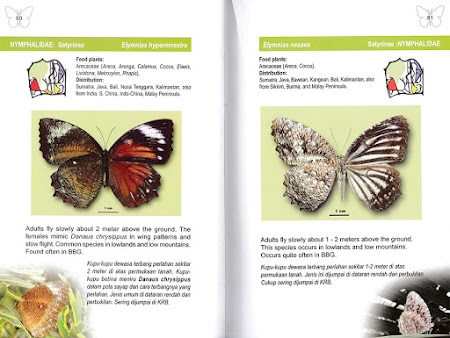 Some of the specimen photos shown are not in the best of condition, but they were probably of specimens that were actually captured and set on location from the Bogor Botanic Gardens. It should be noted that no English common names are indicated in this particular pocket guide, and only the scientific names of the species are used. 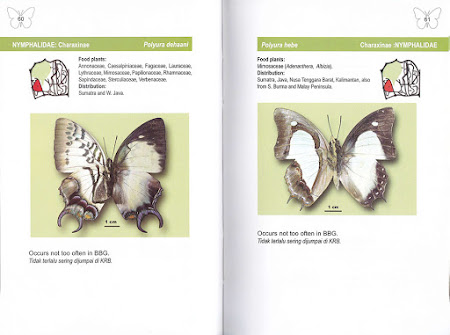 On the left page, the awesome caliper-tailed Polyura dehanii was also observed before at the Bogor Botanic Garden!

At Rp45,000 or just under S$5, this pocket guide is a good companion for any butterfly-watching enthusiast visiting Bogor Botanic Garden. And who knows, you may be lucky enough to spot the awesome caliper-tailed Polyura dehanii at the gardens!

Text and Photos by Khew SK.

Photos from the books "Precious and Protected Indonesian Butterflies" and "Practical Guide to the Butterflies of Bogor Botanic Garden" are copyrighted property of their respective authors and publishers, and samples of the pages from the books are featured here under the principles of fair use.