Butterfly of the Month - November 2021 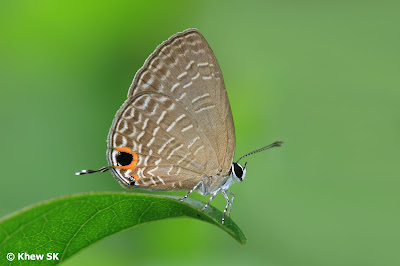 A Dark Caerulean perched on the tip of a leaf and surveying its surroundings
The 2nd last month of 2021 is almost over. But the world is still wondering when Covid19 is going to end, or will it continue to wreak havoc on our lives. It has been almost two years since the virus was discovered. Now, different countries are dealing with the virus in their own unique ways - from almost getting back to normalcy and dispensing with face masks, to extreme cases where snap lockdowns are imposed with zero tolerance of any infection cases. 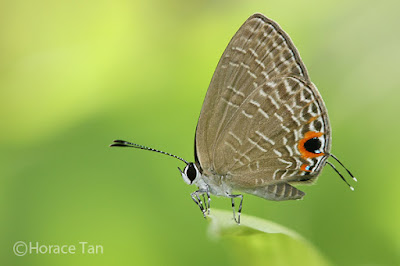 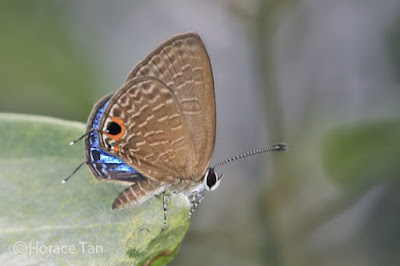 A male Dark Caerulean showing a bit of its deep shining blue uppersides
Whatever the case may be, life must go on. Like fighting an alien invader in the movies, humankind has to reclaim the initiative. Medical science has improved in leaps and bounds for the past 24 months - from vaccines and better medical care to pills that can reduce the symptoms or even mitigate the seriousness of the virus attack to avert fatality. And the battle rages on. 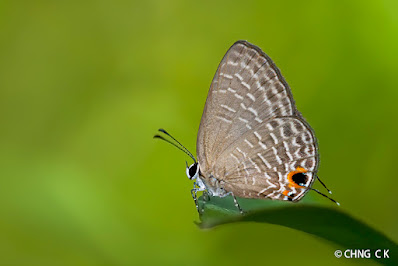 Many countries are working to re-open their economies and connectivity. Vaccinated Travel Lanes (VTLs) have been negotiated and implemented amongst countries that have open travel of passengers who have been vaccinated - without the need for long and unproductive quarantines. There is a glimmer of hope for people who have not seen their loved ones for nearly two years, and families and friends to be reunited again. 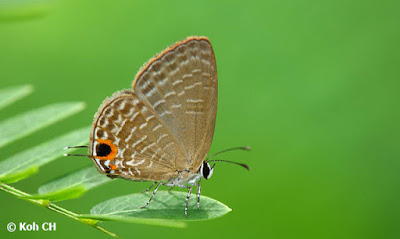 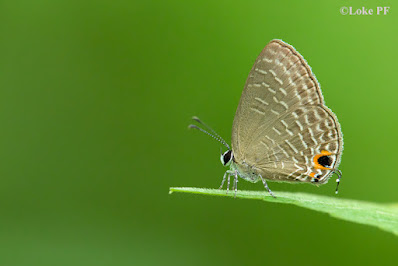 Back here in Singapore, the government is relaxing its safety management protocols in small steps. As of this week, vaccinated individuals are now allowed to dine out in groups of five. Opening up of the economy is still cautiously done, as the number of infections are still in the 2000+ on average, although more than 98% of these covid positive cases have either mild or no symptoms. However, the sad part is that for the past two months, there have still  been daily fatalities, particularly amongst seniors above 60 years of age. 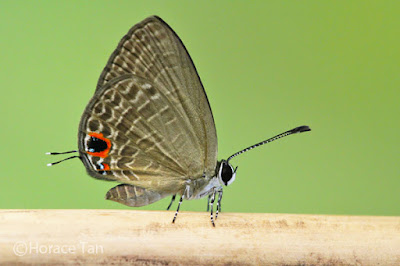 Whilst there is optimism that we will live with Covid as an endemic disease, a new threat rears its head in the form of Omicron, another variant of the virus that is said to be even more infectious and deadly. Originating from Africa, it has already begun to make its way across to Europe and Asia, and it will be a matter of time when we will have to deal with this new scourge. 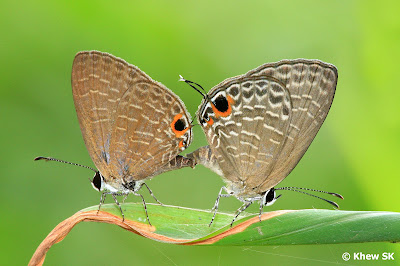 A mating pair of Dark Caerulean.  Left : Male, Right : Female
Fortunately, our butterflies are not affected by such viruses that have exposed the vulnerability of our human species. The feature butterfly for the month of November 2021 is the Dark Caerulean (Jamides bochus nabonassar). One of six species from the genus Jamides found in Singapore, the Dark Caerulean is also the smallest amongst the six species. 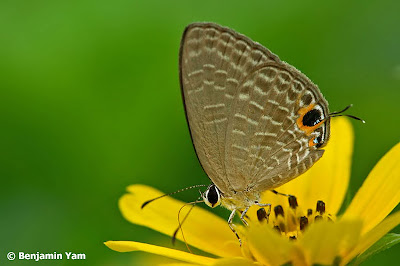 A Dark Caerulean feeding on the flower of the Singapore Daisy (Sphagneticola trilobata)
The Dark Caerulean has, in recent years, become more regularly spotted by butterfly photographers in Singapore. Though recorded as a moderately rare species, it has been observed in a wide variety of locations and habitats. This may be because its caterpillars feed on several host plants which are considered weeds and grow quite commonly in wastelands and cleared areas. 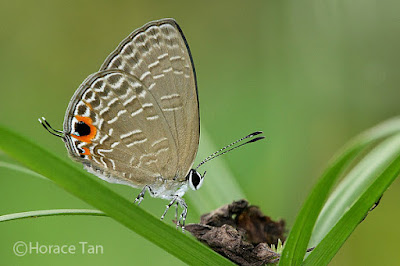 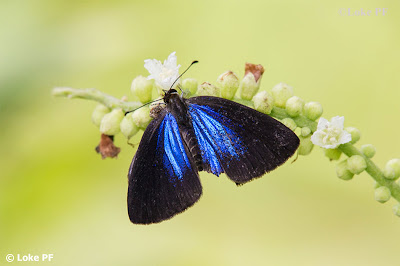 A male Dark Caerulean showing its deep shining blue upperside.  Unfortunately, this individual was the victim of a Crab Spider
The male is a deep shining blue above on both wings, giving an attractive iridescent appearance when the butterfly is in flight. There is a broad black border on the forewing apical area with the hindwing border narrower. The females are paler blue and have broad black borders on both the fore and hindwings. 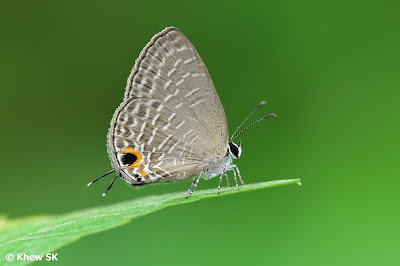 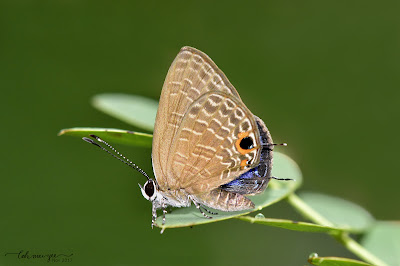 The underside is ochreous brown in the males and greyish in the females. There is the usual series of whitish striations on both wings. There is a large black tornal eyespot that is crowned with orange. and a smaller one adjacent to it. There is usually some light blue iridescent scales in the eye spots. At vein 2 of the hindwing, there is a filamentous white tipped black tail. 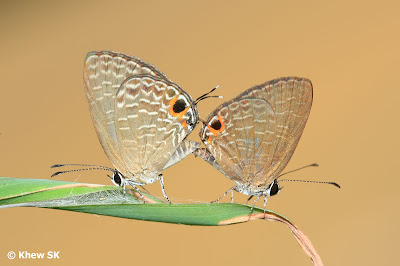 The eyes of the Dark Caerulean are large and jet black, whilst the antennae are banded black and white. The butterfly is often seen feeding at flowers or ovipositing on one of its caterpillar host plants. At other times, it can be seen fluttering restlesssly amongst shrubbery and stopping to rest on the tops of leaves in the habitats that it prefers.
Text by Khew SK : Photos by Chng CK, Khew SK, Koh CH, Loh MY, Loke PF, Horace Tan and Benjamin Yam
References
Posted by Commander at 8:31 PM 0 comments