Life History of the Darky Plushblue 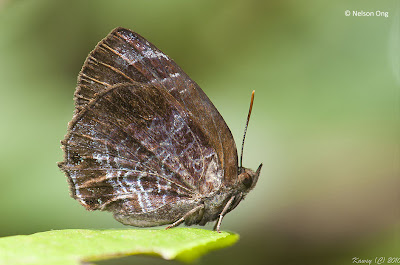 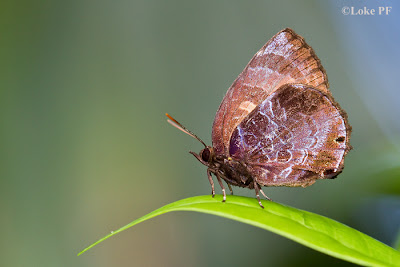 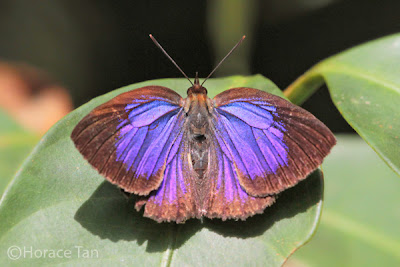 A female Darky Plushblue sunbathing on a leaf.

Physical Description of Adult Butterfly:
Above, the male is shining violet blue with a very thin dark border; the female is pale purplish blue with broad brown to dark brown borders. Below, the markings are pale purplish brown with whitish outlines and overlaid with whitish scales in some of them. Compared to the other local Flos spp., these markings  do not contrast strongly with the  brownish ground colour. The hindwing has  a black tornal spot and a black marginal spot in space 2, both of which are surrounded  by brassy scales. Unlike the other local Flos spp., the hindwing of the Darky Plushblue is not tailed. Instead the end of vein 2 on the hindwing has a short tooth. 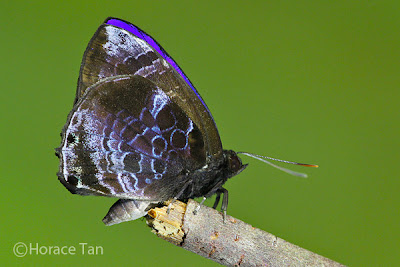 A male Darky Plushblue giving us a glimpse of its shining blue upperside. 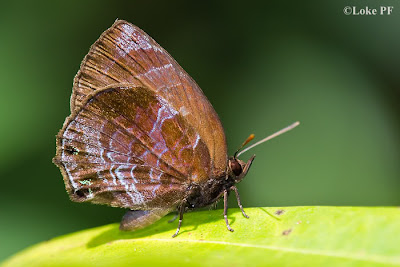 Field Observations of Butterfly Behaviour:
The Darky Plushblue is moderately rare in Singapore and sightings of adults have been restricted to several shady forested locations or in the vicinity of its host plants within the central catchment reserve. The adults are strong flyers and they typically perch with their wings closed, but in sunny weather the females have been observed to open their wings fully to sunbathe in between ovipositing runs. In rare occasions, individual adults have been  seen visiting flowers and ripened fruits of the Singapore Rhodendron. 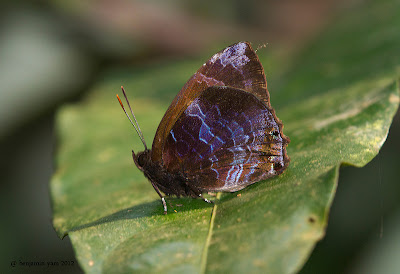 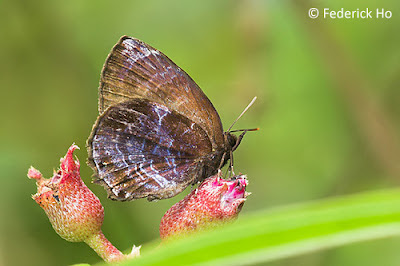 Early Stages:
The Darky Plushblue (as well as Flos fulgida and Flos diardi) was found in Singapore to be utilizing  Lithocarpus ewyckii as its larval host  about a half century ago by Morrell (Morrell, 1956). Recent field studies have added  Lithocarpus elegans and Lithocarpus conocarpus to the list of  larval host plants.  As in the case of all Flos spp. observed, caterpillars of the Darky Plushblue feed on young and immature leaves of the host plant, and have the habit of building shelters on a leaf for security and concealment. The caterpillars are often found to be in the company of ants on the resident leaves and in their shelters. 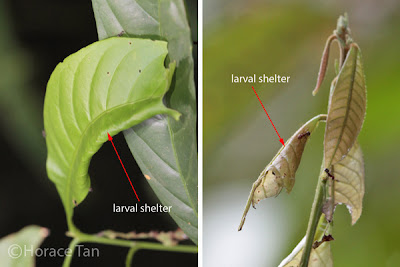 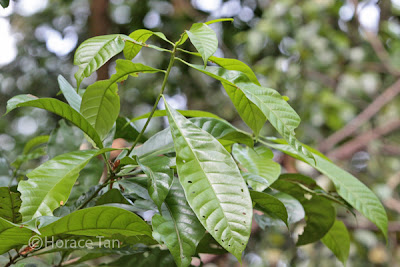 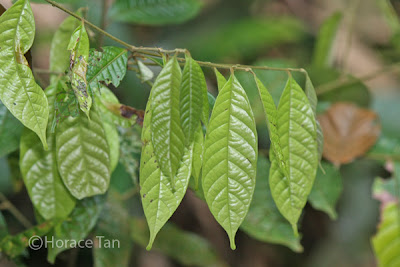 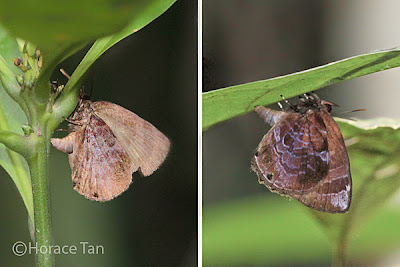 Eggs are laid singly or in small groups of 2-3 on the petiole, stem or a leaf underside of a branchlet of the host plant. Each egg is about 0.8-0.9mm in diameter, white with a slight pale  green tinge. It is shaped like a pressed bun with a slightly depressed micropylar area atop. The surface has a finely reticulated pattern of intersecting ridges with short spikes raising from points of intersection. 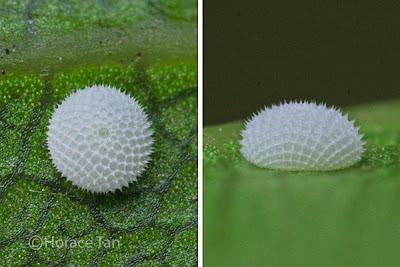 Two views of an egg of the Darky Plushblue. 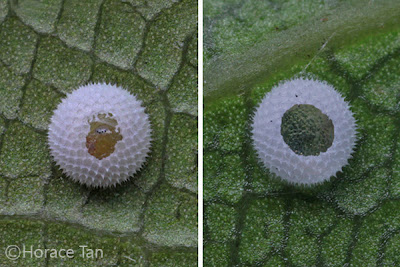 Left: mature egg with the young caterpillar nibbing away the egg shell. Right: empty egg shell after the emergence of the caterpillar.

It takes about 3 days for an egg of the Darky Plushblue to hatch. The caterpillar emerges after nibbling away sufficiently large polar part of the egg shell. The newly hatched shows no interest in devouring the remaining egg shell. The body  is   pale yellowish brown   and has a length of about 1.8mm. It has a rather flattened woodlouse appearance with a large   prothorax,   a yellowish brown head, moderately long dorso-lateral setae and rather long lateral setae. There are also a fair number of very short setae on the body surface. 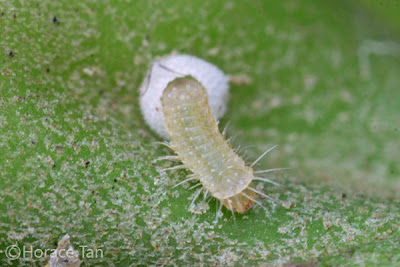 A newly hatched caterpillar emerging from its egg shell. The 1st instar caterpillar feeds on surface of a young leaf leaving small holes on the leaf lamina. A  few caterpillars have been observed in the field sharing a feeding site with no animosity towards each other. Towards the end of 1st instar, pinky red patches appear on the front portion of the prothorax and the posterior abdominal segments. After 2 days of growth and reaching a length of about 2.2-2.5mm, the caterpillar moults to the next instar. 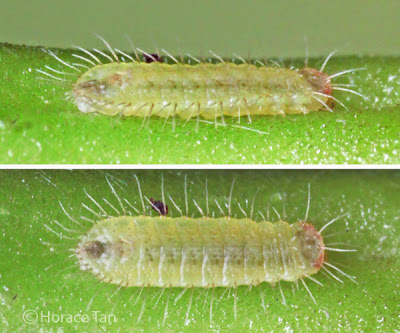 The 2nd instar caterpillar features long lateral setae and a black head. Long dorso-lateral setae are no longer present, but many short setae appear on the entire body surface. The prothorax is marked by a large black patch with a leading edge in pinky red. The dorsal nectary organ (DNO), ringed in dark reddish brown,  is already visible on the 7th abdominal segment.  It is flanked on its upper edge by a  small dark reddish patch, and on its lower edge, a much larger one which covers the dorsum of the 8th abdominal segment. The pair of tentacular organs on the 8th abdominal segments are also present. A large black anal plate dominates the remaining posterior segments. This instar lasts for 3-4 days with the body length reaching about 4mm before the moult to the 3rd instar. 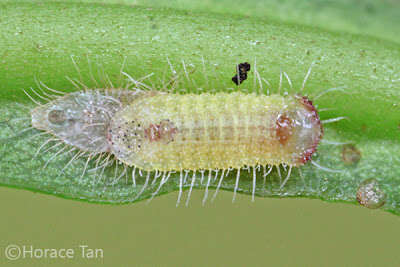 A newly moulted 2nd instar caterpillar of the Darky Plushblue. 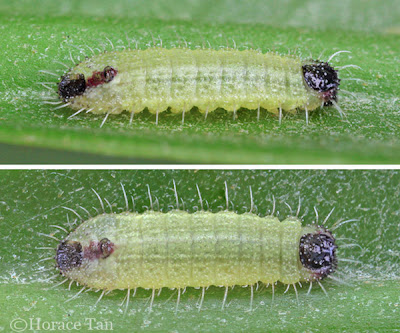 The 3rd instar caterpillar resembles the 2nd instar caterpillar closely with a few changes.  The DNO is now prominently marked with a  dark brown oval ring. The red dorsal patch on the 8th abdominal segment has two lateral arms, though faint in appearance, reaching up to the tentacular organs. The 3rd instar takes about 3-4 days to complete with the body length reaching about 7-7.5mm. 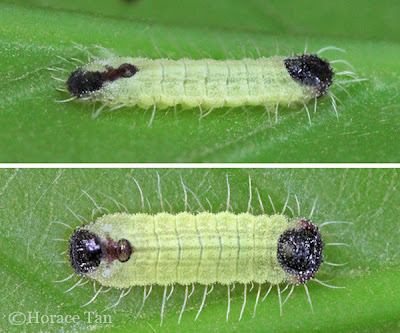 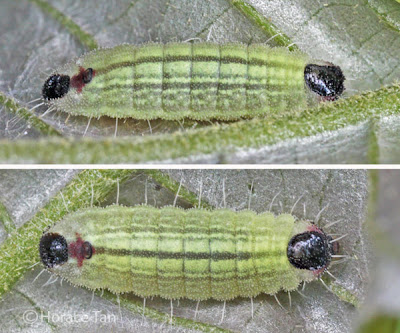 Two views of a 3rd instar caterpillar, late in this stage, length: 7.5mm. 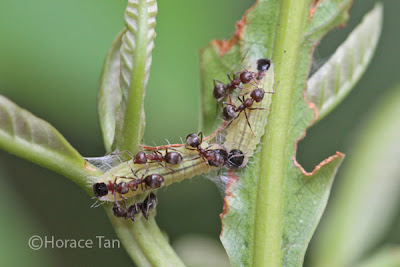 Ants attending to a pair of Darky Plushblue caterpillars on L. elegans. 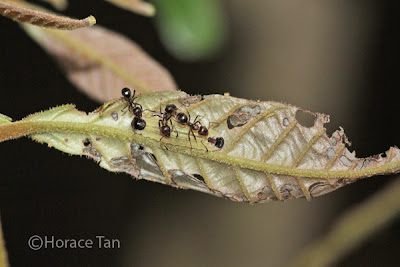 Ants attending to a  Darky Plushblue caterpillar on L. conocarpus.

The 4th instar caterpillar has similar markings as the 3rd instar caterpillar. One notable change is in the prothoracic dark patch which now has two small and diffuse white markings embedded near its posterior edge. Another change is in the red side arms on the 8th abdominal segment, being broader and more prominent. The dorsal band becomes darker and prominent in this instar too. The 4th instar takes about 5-6 days to complete with the body length reaching about 12-12.5mm. 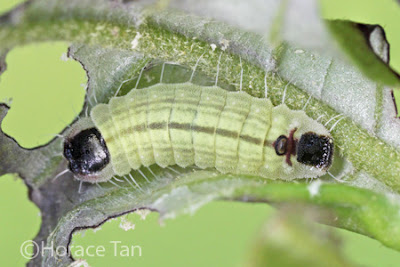 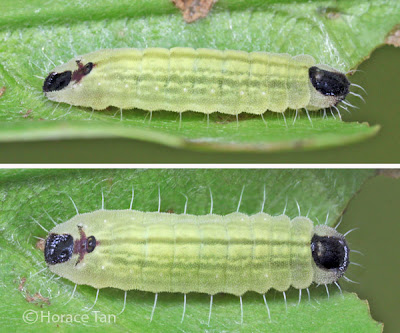 Two views of a 4th instar caterpillar, late in this stage, length: 10mm. 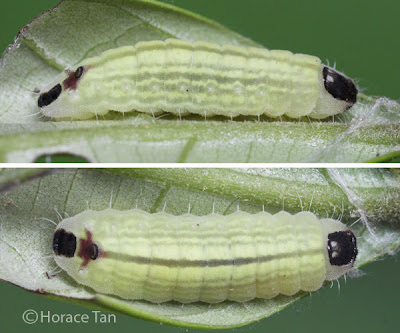 Two views of a  4th intar catepillar, dormant prior to the moult to the next instar, length: 12mm. 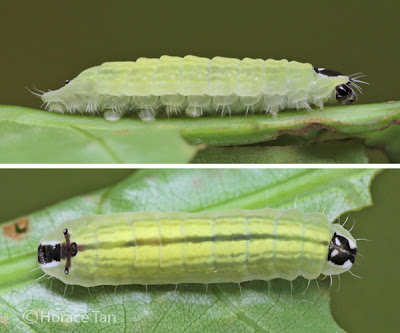 Two views of a 5th intar caterpillar, early in this stage, length: 14.5mm. 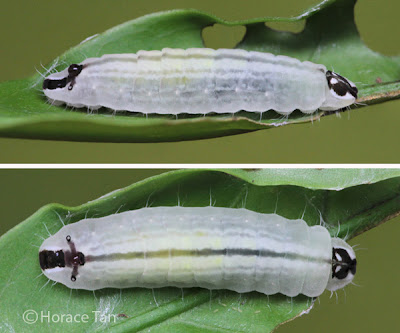 Two views of a  5th intar caterpillar, late in this stage, legnth: 20.5mm.


After 6-8 days of feeding and reaching a length of about 19mm, the caterpillar stops feeding during the final day of the 5th instar. During this time, its body gradually shortens and the longitudinal bands on its body disappear. Soon the caterpillar becomes an immobile pre-pupa confined to  its leaf shelter. The pre-pupal caterpillar prepares for pupation by spinning a silk girdle and a silk pad to which it attaches via claspers at its posterior segment. 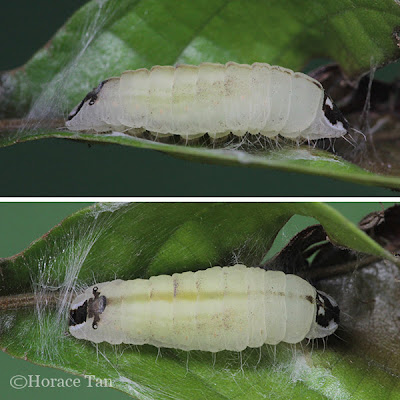 
Pupation takes place after a 1-day pre-pupal period. The pupa, with a length of 12-14mm, has a shape typical of a Lycaenid species. Its body is whitish with a yellow tinge,  and with  spiracles marked in a contrasting orange coloration. 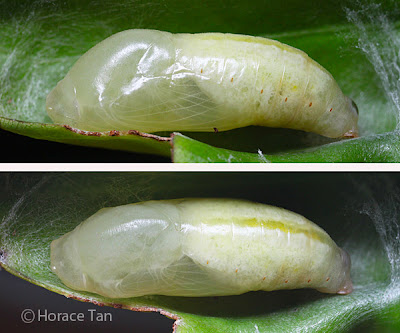 Two views of a pupa of the Darky Plushblue, length:12mm.


7 days later, the pupa turns dark in its wing pads, the thorax and the dorsum of its abdomen.  Shining blue patches on the forewing upperside can now be seen in the wing pads with the extent of its coverage revealing the gender of the pupa. The next morning, the pupal stage comes to an end with the emergence of the adult butterfly. 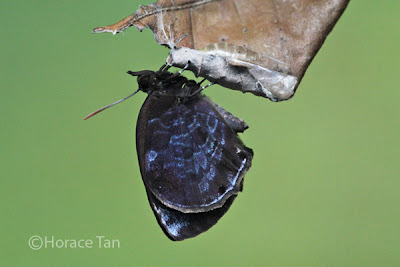 A newly eclosed Darky Plushblue waiting for its wings to be fully firmed up before taking its maiden flight.