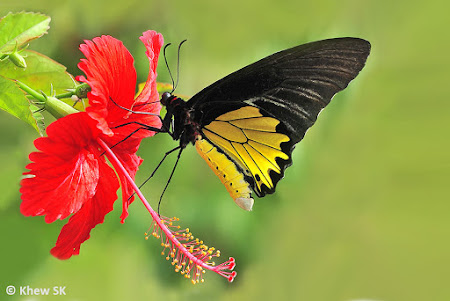 A male Common Birdwing feeding on the flower of the Hibiscus


In the next part of our observations of butterflies' nectaring plants, we feature a further six species of flowering plants which butterflies visit to feed upon the flowers. Again, we reiterate that some of these attractive-looking and colourful flowers (to us humans) may make us assume that they are rich with nectar and will attract all sorts of insects to feed on them. Nothing could be further from the truth. 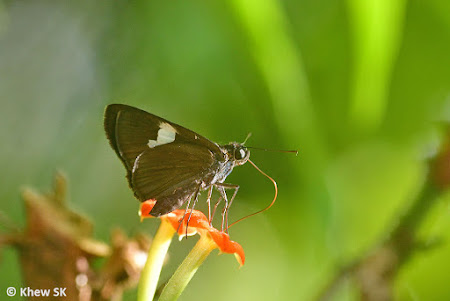 
One classic example is roses. To us humans, not only do roses look attractive, the fragrance of a bouquet of roses appeals to most. Gardener enthusiasts of this colourful plant will probably be the best source of information as to whether butterflies visit roses for nectar. As it turns out, roses are apparently not attractive to butterflies and very rarely do we see butterflies visiting the colourful roses to feed on. Perhaps some experts can share their experience with us? 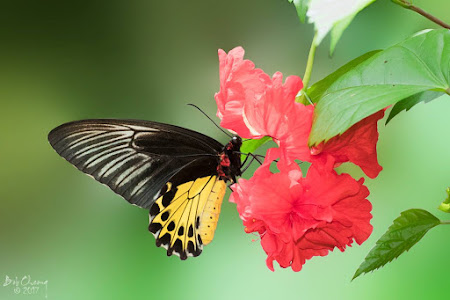 
Back to our nectaring plants, and the first one in this article would be the China Rose or better known to most people as Hibiscus. Belonging to the Malvaceae family, the Hibiscus is characterized by a trumpet- shaped receptacle, five petals and a long pollen tube. The flower measures from 5 to 14 cm broad. Cultivars with flowers of many colours are used as ornamental plants. Some are double or have differently shaped petals. 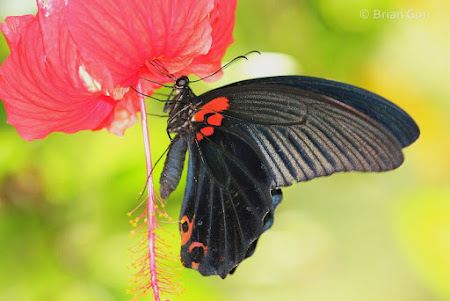 A male Great Mormon feeding on the flower of the Hibiscus

Butterflies that visit the bright red Hibiscus flower to feed on its nectar are usually the larger species of the Papilionidae and some Pieridae. The physical characteristics of the flower itself, being large in size with an extended pollen tube would suggest that a butterfly trying to extract nectar from the flower would need a long proboscis to reach the nectar. 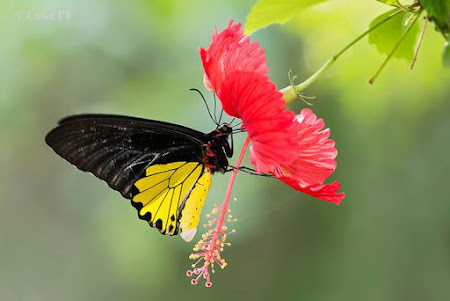 The Hibiscus is the national flower of Malaysia. Also called the Bunga Raya, the large and attractive flower won over several other candidates and was named the national flower in 1960. The plant is cultivated in many parks and gardens and its multiple cultivars that come in a whole variety of colours from reds and pinks to yellows and whites. 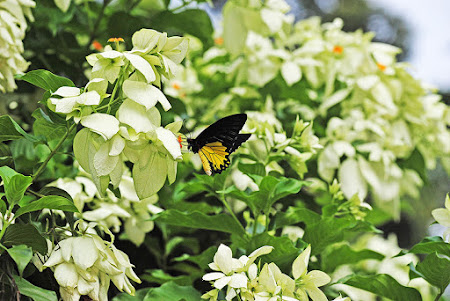 This interesting plant from the Rubiaceae family grows as a large bush up to 3m tall and is cultivated in parks and gardens but may also grow wild in the forested nature reserves. The flowers of the Mussaenda are small, orange to yellow-orange and are tubular and star-shaped. They are arranged in small clusters known as corymbs and produce large, white, egg-shaped sepals that are up to 8 cm long. In many other species and cultivars, these attractive sepals can range from crimson red to pink and yellow. 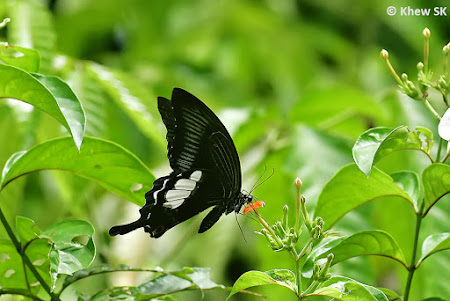 A Great Helen feeding on the flower of the White Mussaenda 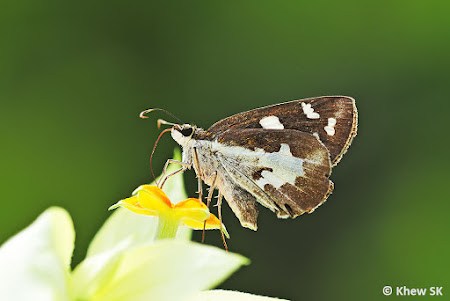 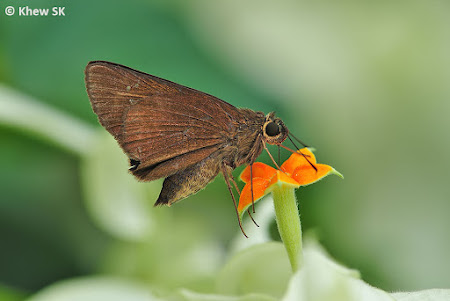 The very small and sparse flowers of the Mussaenda attracts some butterflies in a very curious way. The long tubular shape of the flower requires an equally long proboscis to reach the nectar and it is for this reason that we have only observed butterflies that sport long proboscis feeding at this flower. Amongst the large Papilionidae, the Common Birdwing and Great Helen are regular feeders where the plant can be found, whilst the long-proboscis Hesperiidae have also been photographed on the Mussaenda flowers. 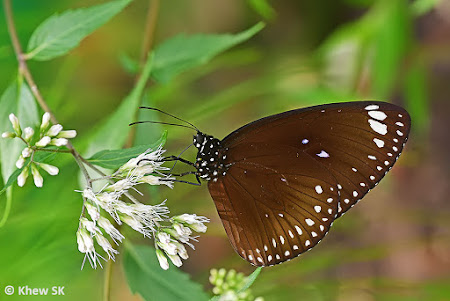 This almost weed-like plant is not often found in the many species of flowering plants that are cultivated in our parks and gardens. However, where it grows, it is another Danainae "magnet" just like the False Dill or DogFennel (Eupatorium capillifolium) and Indian Heliotrope (Heliotropium indicum). These plants probably contain pyrrolizidine alkaloids which the Danainae need for their reproductive function and to maintain their distastefulness to predators. 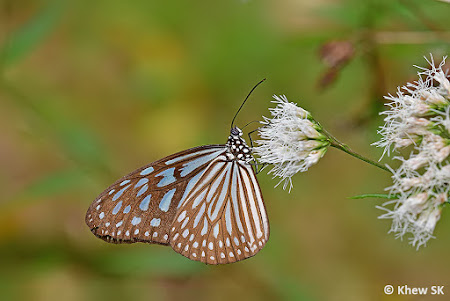 A number of the Tigers and Crows are attracted to E. squamosum and cultivating it as part of the landscape palette in parks and gardens will probably add to the diversity of butterflies attracted to a landscaped butterfly garden. Curiously, we have not observed other species of butterflies feeding on the flowers of this plant. 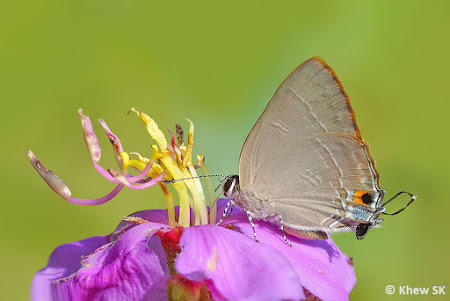 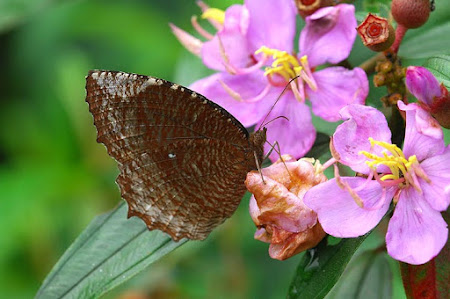 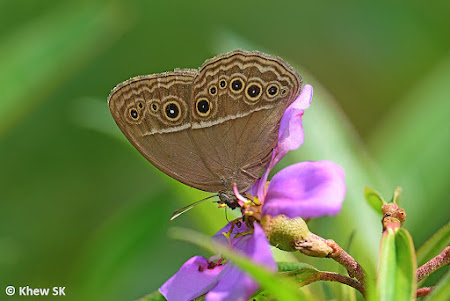 The attractive purple-pink flowers with bright yellow stamens have occasionally attracted various species of butterflies to feed on it. However, it is not a preferred nectaring plant, and there have been observations of large flowering bushes of the Singapore Rhododendron, but not a butterfly in sight! On the occasions that some species are seen on the flowers, it is usually in the early morning hours of the day. The Common Palmfly, Dark Brand Bush Brown, Malayan Eggfly, Malay Viscount, Malay Baron and Common Red Flash have been photographed on the flower of this plant. 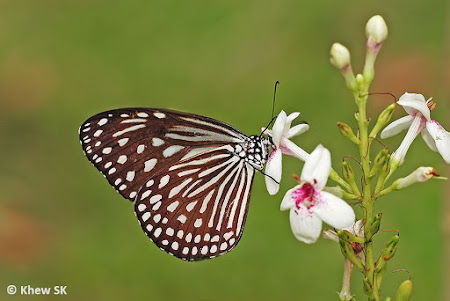 A plant that has been cultivated in butterfly gardens, more to sustain the population of the Autumn Leaf (Doleschallia bisaltide bisaltide) as its alternative caterpillar host plant, the Golden Net-Bush's flowers sometimes attract butterflies to feed on it. The pretty white flowers with pink centres grow on long upright stalks and this is where some butterflies are observed to be attracted to feed on the flowers. 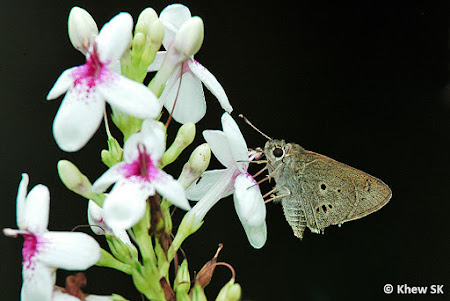 The Golden Net-Bush is an attractive shrub that adds to the colour and lushness of a landscaped garden - mainly due to its large light green net-veined leaves. However, due to the voraciousness of the Autumn Leaf's caterpillars, the bush may be defoliated very quickly if there are many caterpillars of this species on the plant. 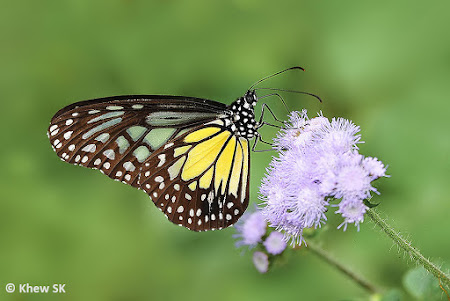 This weed from the Asteraceae (Compositae) family is native to tropical Brazil. In Singapore, it appears as a wild flower in disturbed wasteland and cleared areas. It is considered an invasive weed in some countries and eradicated. Even in a landscaped butterfly garden, it is sometimes removed before it overwhelms other plants. 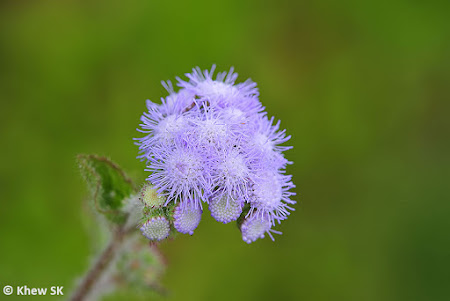 The mauve (light bluish purple) flowers are attractive to some species of butterflies. The Danainaes seem to like the flowers for nectar. Due to the small size of the flowers, they are well-suited for the Lycaenidae and some of these smaller sized butterflies have been seen to stop at the flowers for their daily food supply.