Just a little over six years ago, when Ms Ho Ching was thinking of a Chinese New Year memento for the volunteers and grassroots supporters of one of the constituencies, she thought of a Chinese tea cup adorned with a photo of a butterfly. I suggested a few shots of some colourful butterflies for her consideration, and this started an annual journey of designing a CNY butterfly teacup since the first edition in 2015. 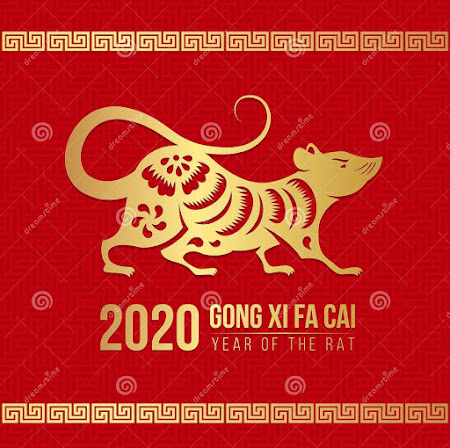 In selecting the shots for the CNY butterfly teacup, I chose a few criteria to shortlist the photos. 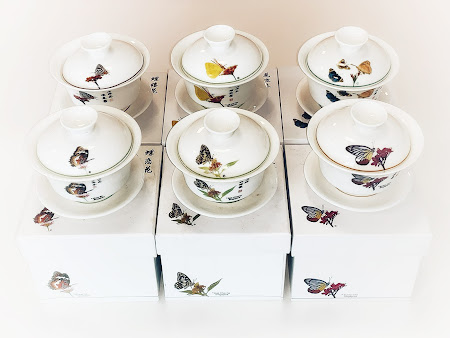 The Chinese New Year teacup series with their respective boxes


In subsequent years, ButterflyCircle members generously contributed their photographs for the CNY  butterfly teacups. It was always a challenge to select the photos as there were many excellent shots to choose from. And so, every Spring Festival since 2015, there was a photo of a pretty butterfly on each year's CNY butterfly teacup. 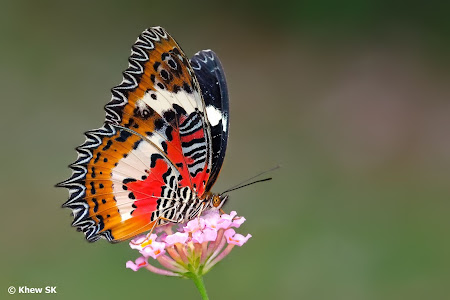 The first CNY butterfly teacup design features the Malay Lacewing, a local species of butterfly with bright colours and intricate lace patterns on its wings. It is a species that frequents the forested nature reserves in Singapore, and is relatively rare in recent years. It flies in a slow unhurried manner and is known to be distasteful to predators. 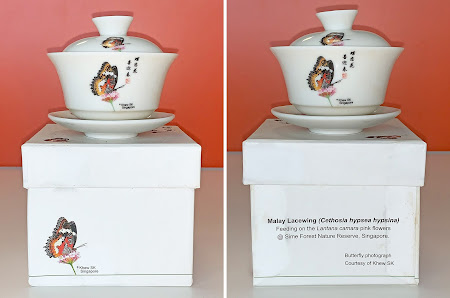 2015 edition of the CNY butterfly teacup featuring the Malay Lacewing

Each ceramic teacup is designed with a lid and a saucer, and comes in a customised box. The description of the butterfly and flower are also annotated on the box. For each year, a Chinese couplet is inscribed on the box as well as the teacup. For the 2015 edition, the couplet reads "蝶恋花 喜迎春" or roughly translated as "Butterflies Love Flowers, Happiness of the New Year". 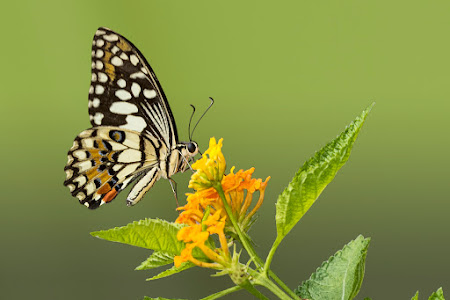 The 2016 CNY butterfly teacup featured the common Lime Butterfly, an urban species that is more regularly seen in our urban parks and gardens. Its caterpillars feed on various species of lime plants, which are usually found in abundance, especially during the CNY season as the ripening orange lime fruits signify gold and prosperity to the owner of the plants. 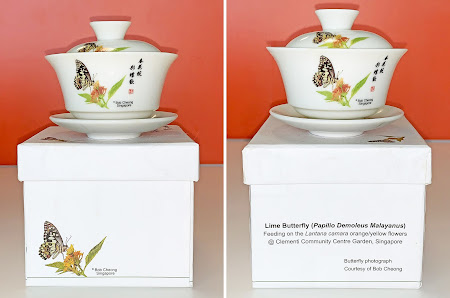 2016 edition of the CNY butterfly teacup featuring the Lime Butterfly


The 2016 Chinese couplet was "春花绽 彩蝶欢" translated to mean "Spring Flowers Blossom, Beautiful Butterflies Dancing". A most appropriate and poetic couplet that goes well with the Lime Butterfly feeding on the flowers of the Lantana bush. The ButterflyCircle photographer, Bob Cheong, shot this at the Clementi Community Centre Garden in Singapore. 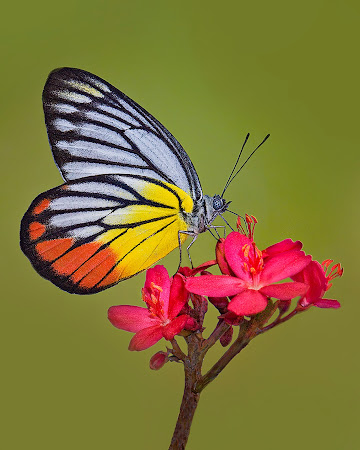 The pretty urban butterfly, Painted Jezebel was featured on the 2017 edition of the CNY butterfly teacup. This common species can often be spotted at urban gardens, parks and roadside greenery in Singapore. It flies leisurely at treetops, and often seen frolicking with other individuals of the species. 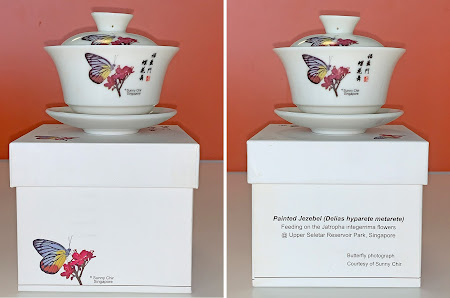 2017 edition of the CNY butterfly teacup featuring the Painted Jezebel 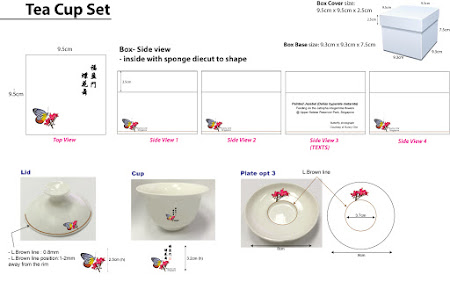 
The 2017 teacup Chinese couplet was "福盈门 蝶花舞" or "Prosperity Comes to the Home, Butterflies Dance amongst Flowers". The photo was taken by the late ButterflyCircle member Sunny Chir who passed away in May 2018. The Painted Jezebel featured on the teacup was feeding on the red flowers of the red Shanghai Beauty (Jatropha interrigima) at the Upper Seletar Reservoir Park. 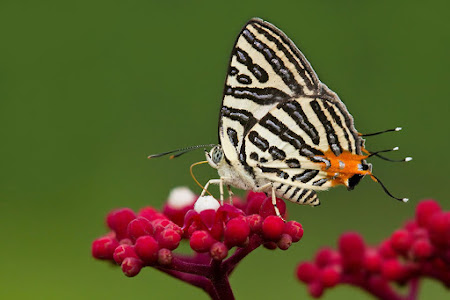 This small and pretty Lycaenid is one of two species of its genus that can be found in Singapore. The Club Silverline has silver lined black markings on pale beige wings. It is a fast flyer, but is often spotted feeding on flowers in the early hours of the day. It can be found in urban parks and gardens as well as the forested nature reserves in Singapore. 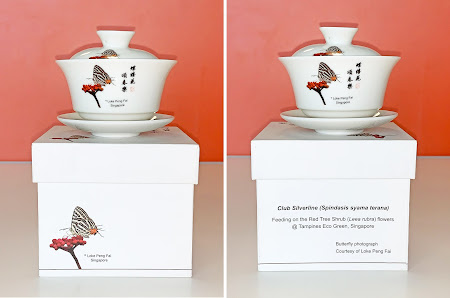 2018 edition of the CNY butterfly teacup featuring the Club Silverline


ButterflyCircle member Loke Peng Fai shot this Club Silverline feeding on the red flowers of the Red Tree Shrub (Leea rubra) at one of our urban parks, Tampines Eco Green, where this butterfly species has been often spotted. The Chinese couplet for 2018 reads "蝶嬉花 颂春乐" meaning "Butterflies Frolick amongst the Flowers, Singing a Happy New Year Song". 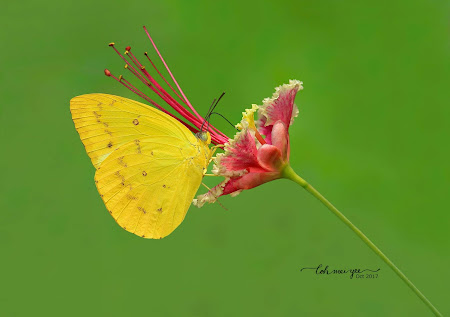 The bright and cheery Orange Emigrant was the feature butterfly on the 2019 edition of the CNY butterfly teacup. The species is another common urban butterfly, often seen in urban parks and gardens where its preferred caterpillar host plant, the Scrambled Egg Bush or Golden Senna (Senna surattensis) grows. It is a fast-flying butterfly with white forewings and yellow hindwings on the upperside, and a golden yellow underside. 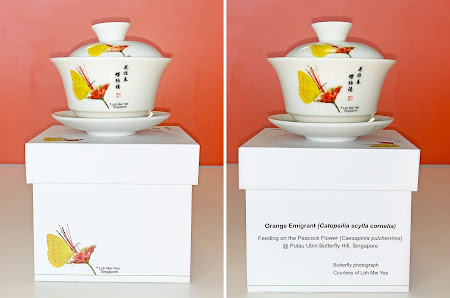 2019 edition of the CNY butterfly teacup featuring the Orange Emigrant 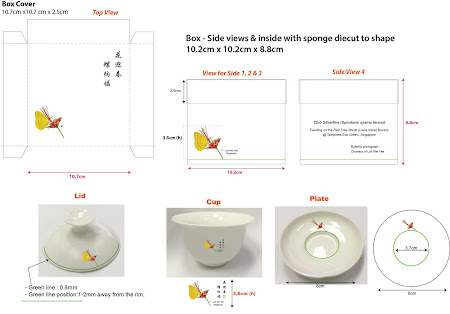 
The Orange Emigrant on the CNY 2019 butterfly teacup was photographed by lady ButterflyCircle member Loh Mei Yee. The butterfly was feeding on the flower of the Peacock Flower (Caesalpinia pulcherrima) at the Butterfly Hill on Pulau Ubin. The 2019 Chinese couplet reads "花迎春 蝶纳福" which roughly translates into "Spring-greeting Flowers, Fortune-blessing Butterflies". 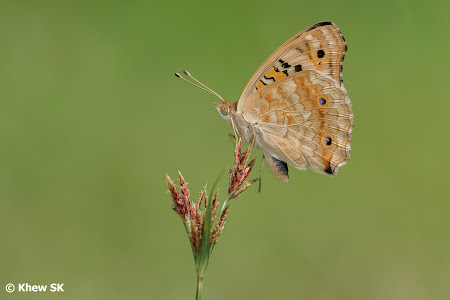 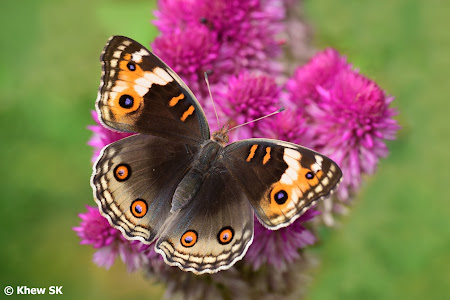 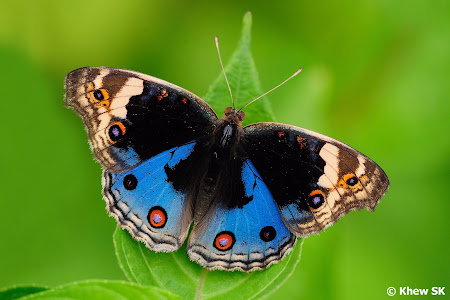 This year, for the first time, we feature 3 individuals of the same species of butterfly on the CNY teacup. The common urban Blue Pansy is a sexually dimorphic species with the male and female with a different appearance. The underside of the butterfly is pale and cryptic, whilst the bright colours of the upperside of the wings are attractive and pretty. 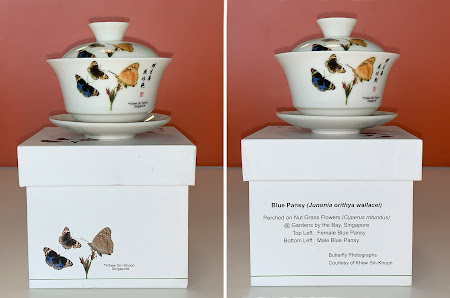 2020 edition of the CNY butterfly teacup featuring the Blue Pansy 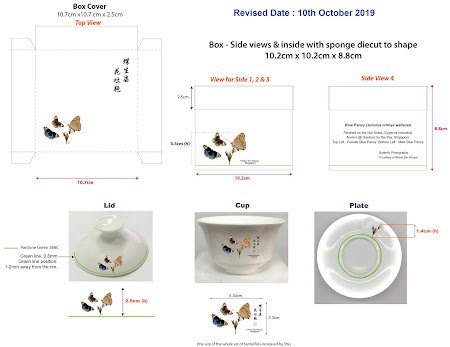 
The Blue Pansy was photographed perched on the flower of the Nut Grass Flower (Cyperus rotundus) at the Gardens by the Bay in Singapore. The male with its attractive blue wings and orange-ringed eyespots is depicted on the left of the perched individual, and "chasing" the female. The Chinese couplet reads "蝶生姿 花吐艳" meaning "Butterflies Dance, Flowers Blossom". 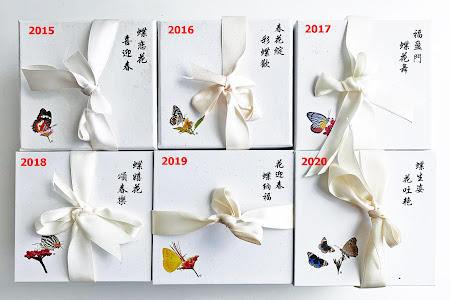 
And with the sixth edition of the CNY butterfly teacup series, we start a new decade with the Year of the Rat, which is also coincidentally the first animal in the Chinese horoscope. With new beginnings and exciting and unpredictable time ahead of us, I would like to take this opportunity to wish all our readers and members a...


"HAPPY LUNAR NEW YEAR and May the Year of the Metal Rat bring good fortune, prosperity, good health and happiness to Everyone!"

Special thanks to Ms Ho Ching for generously sponsoring the CNY teacups for the past 6 years and for giving the privilege to ButterflyCircle members to feature their photos on the teacups.

Posted by Commander at 4:53 PM

are these teacups still available for sale?