Butterfly of the Month - September 2011 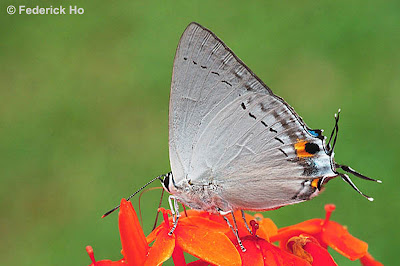 September is the 9th month of the Julian and Gregorian calendars, and one of only four months of the year that has 30 days - the others being April, June and November.  In the northern hemisphere, September heralds the season Autumn - a time of falling leaves and rich reds, oranges and browns in the landscape.  The weather cools as Mother Nature prepares for the colder weather ahead. 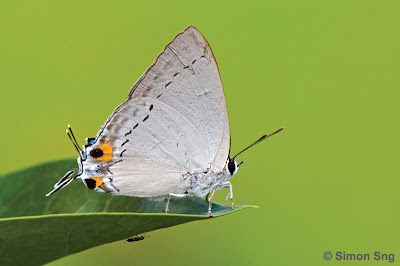 On the Singapore front, in the aftermath of the Presidential Elections where the top two candidates were separated by a whisker of a margin of 0.35%!  Singapore's 7th President, Dr Tony Tan was sworn in on 1 Sep 2011. 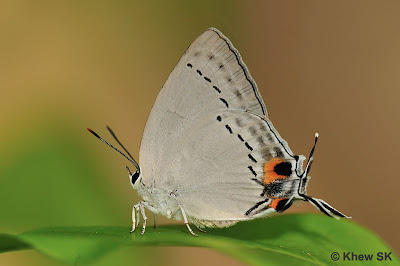 Elsewhere in the world, America remembers 9 Sep (the infamous '911'), ten years after the Al-Qaeda terrorist attacks on the Twin Towers of the World Trade Centre in New York City in which thousands lost their lives. 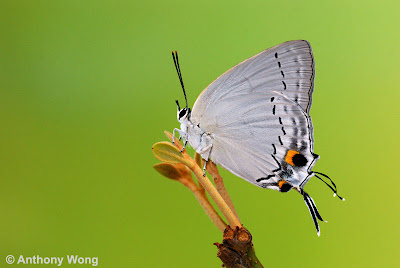 The birthstone for September is the sapphire [Greek: σάπφειρος; sappheiros, "blue stone"] which is a gemstone of the mineral corundrum, an Aluminium oxide.  The most well known colour of this gemstone is blue, and sapphire is usually synonymous with blue or purple in the nature world. 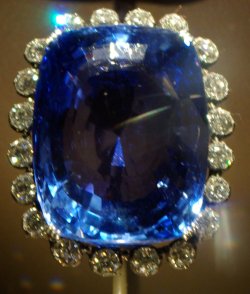 A maiden born when September leaves
Are rustling in September's breeze,
A sapphire on her brow should bind
`Twill cure diseases of the mind.
- Gregorian Birthstone Poems 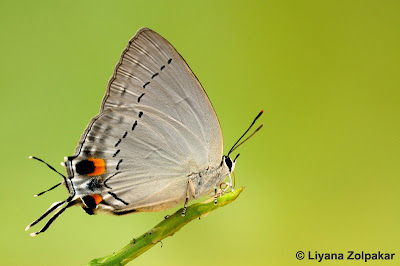 The butterfly of the month for September is the Peacock Royal, a pretty four-tailed Lycaenid of which the upperside of the males of the species is a brilliant sapphire blue.  The Peacock Royal frequents urban parks and gardens but can also be found in the nature reserves.  It is a fast flying butterfly, but can often be observed close up when it stops to feed at flowering plants. 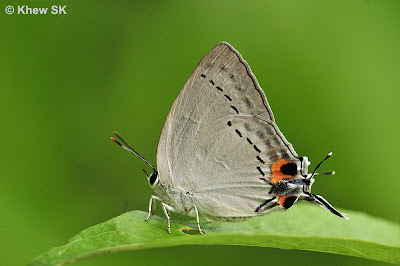 Both males and females are encountered at flowers, although females are usually more often observed, particularly when its caterpillar host plant, the parasitic Dendrophthoe pentandra can be found growing on other trees. 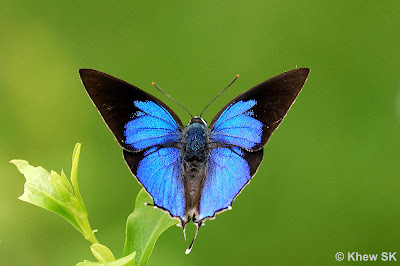 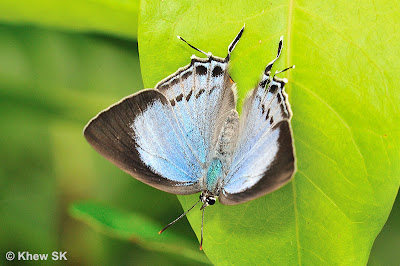 The underside is grayish white with post-discal striae and a series of diffuse black spots. The large black tornal spots are broadly orange-crowned.  The hindwing feature a pair of white-tipped tails at veins 1a and 2. 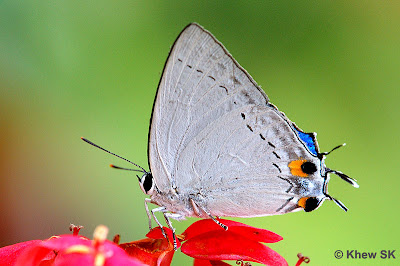 The adult butterflies love the red flowers of Ixora javanica and where there are healthy bushes of this plant at parks and gardens, where an observer may be able to find the Peacock Royal feeding. 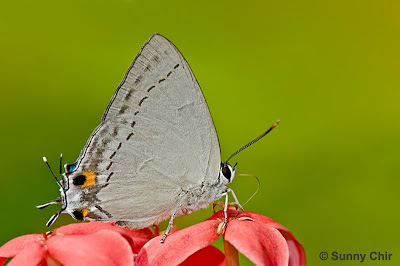 The species is considered moderately common, as it has been seen in parks in urban Singapore and is quite widespread in distribution.  But the Peacock Royal cannot be said to be abundant.  More often than not, only individuals are sighted. 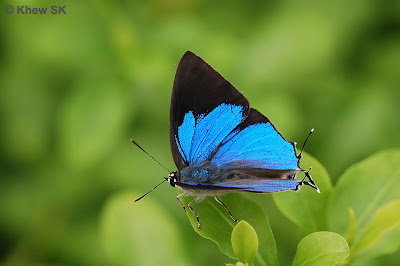 At certain times of the day, both the males and females have been observed to open their wings to sunbathe, displaying their more colourful upperside. 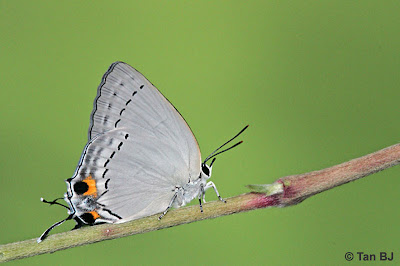 Most times of the day, however, they stop with their wings folded upright, especially when resting on their favourite perches.  When disturbed, they take off rapidly, moving very quickly out of harm's way. 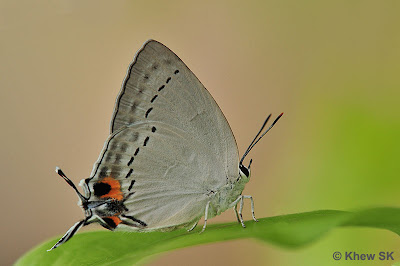 The Peacock Royal is one of three species of the genus Tajuria found in Singapore.  The other two, T. mantra and T. dominus are much rarer and not as often seen.  All appear superficially similar on the underside. 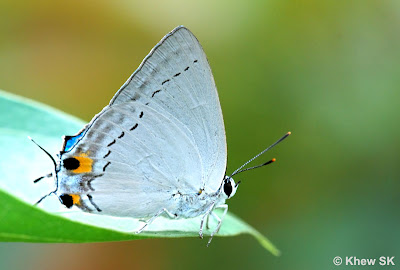