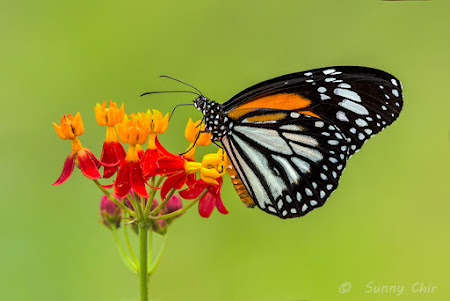 After ButterflyCircle's Chiangmai expedition last month, where most of us had an 'overdose' of Thailand's flying jewels for 7 days, Singapore's lack of both diversity and quantity became a bit of an anti-climax. It is quite amazing when the environment is vast and generally unexploited, biodiversity can thrive. On our little island in sun, where we have recorded over 315 species (and counting), it is quite difficult to imagine a puddling spot literally filled with hundreds of butterflies like what we saw in Thailand. 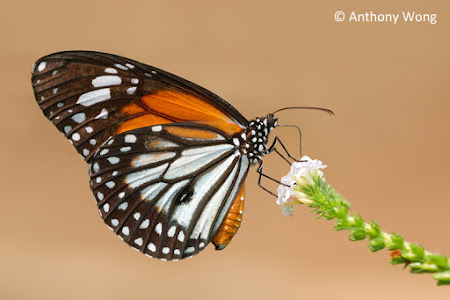 Singapore, despite heavy deforestation due to decades of physical development, still has a lot going for it, as far as our natural biodiversity is concerned. Although we may have had a lot more species in the recent past, it could have been in an even worse state if not for timely intervention by conservationists working with the government authorities. 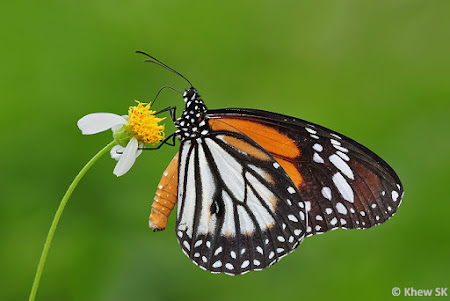 The pessimists contend that we could have done more to save our biodiversity, but what's the use of just complaining? Strive and work towards conserving what we have, in a positive way. This is Singapore. 715 sq km of it. Hundreds of competing uses for the limited land. What can we do to help biodiversity co-exist with development or mitigate human-animal interaction through education? 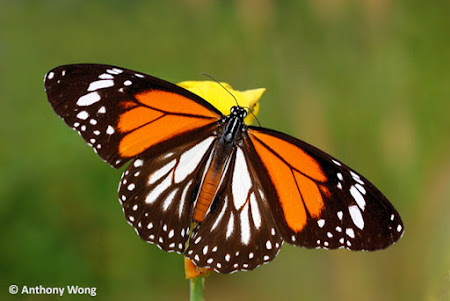 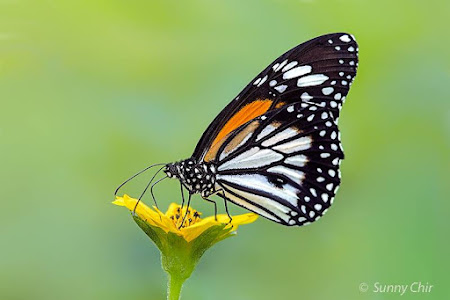 Our planning authority, the Urban Redevelopment Authority, struggles with the longer-term concerns of Singapore's dwindling land reserves as the 'burn-out' rate continues. Precious land is allocated for myriad uses from housing to roads to social infrastructure. Despite the intense development, if we look around us, Singapore is amazingly a city in a garden. Lush greenery. Clean air (most of time, unless our neighbours decide to raze their forests). But there's always room for improvement. 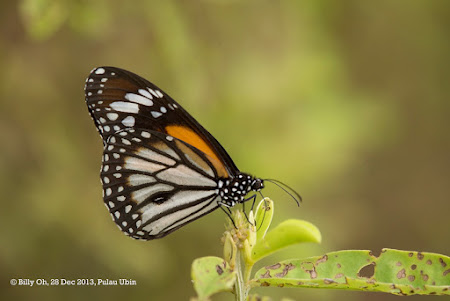 Nature is surprisingly resilient. Perhaps not every species or organism is equally tenacious in surviving on a densely developed island like Singapore. But someone once said, "if we humans have the will, nature will find a way". To survive that is. Where we have done good research, we apply this knowledge and make educated and calculated efforts to conserve what we have. What we don't know enough of, is something that we need to learn more about. 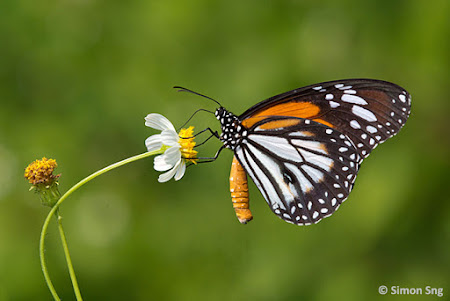 This month, the first custom-designed natural history museum in Southeast Asia will be opened to the public. The spanking new Lee Kong Chian Natural History Museum, with an exhibition area of 2,000 sqm, hopes to educate our resident population on our natural heritage, and why it is important to conserve the remaining biodiversity that shares our island with us. Research and education will be important aspects of the museum. 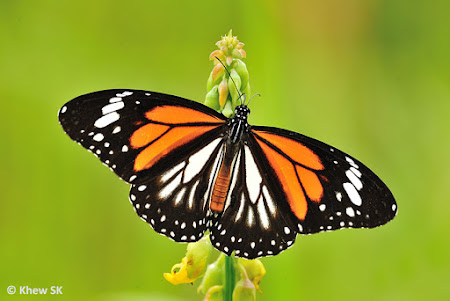 Our feature butterfly of the month is the Black Veined Tiger (Danaus melanippus hegesippus). This medium sized butterfly is a moderately common species in Singapore. It is often observed singly, flying in the company of its related cousins, the Plain Tiger (Danaus chrysippus chrysippus) and the Common Tiger (Danaus genutia genutia). 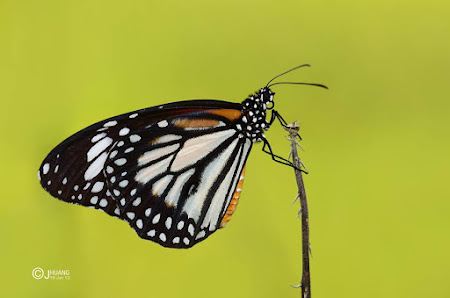 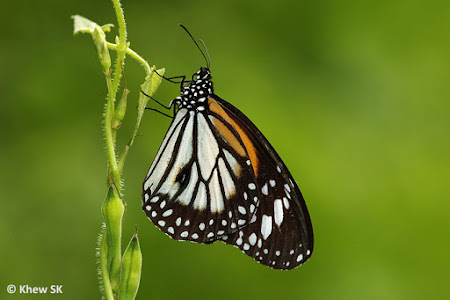 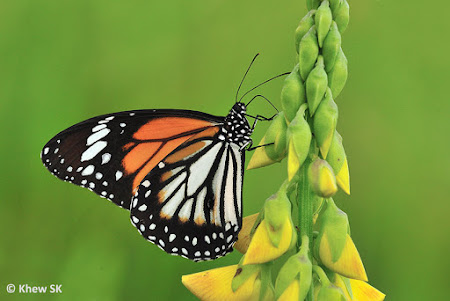 The Black Veined Tiger is has broad black apical borders with white spots and the discal area a strong orange. The ground colour of the hindwing is entirely white without any orange tinge along the blackened veins. There are two rows of submarginal spots on both the fore and hindwings. 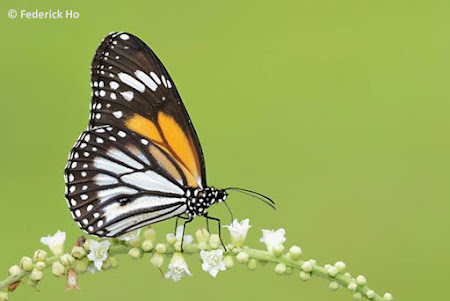 The Black Veined Tiger resembles the Common Tiger and is sometimes confused with its closely related cousin. Both are about the same size and usually fly in the same localities, feeding on the same flowering plants. The primary distinguishing characteristic is the much broader submarginal black border on the hindwing. The hindwings are almost entirely white compared to form-intermedius of the Common Tiger, which also has white hindwings but with strong orange tint along the blackened veins. 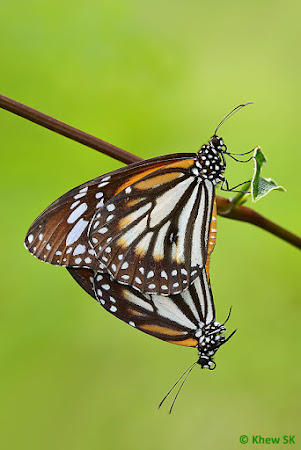 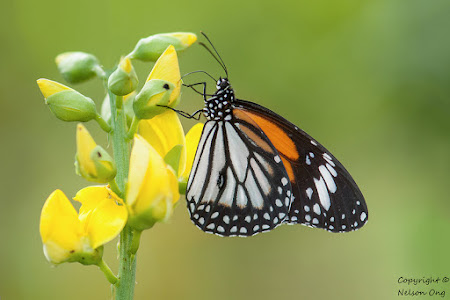 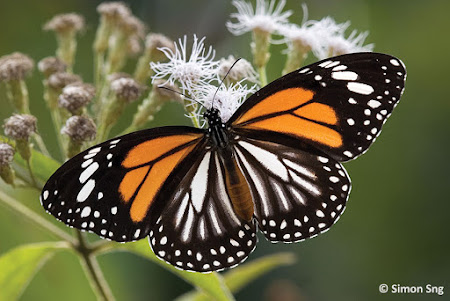 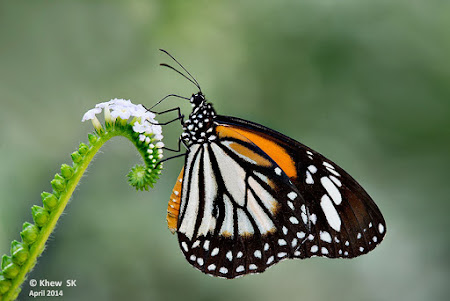 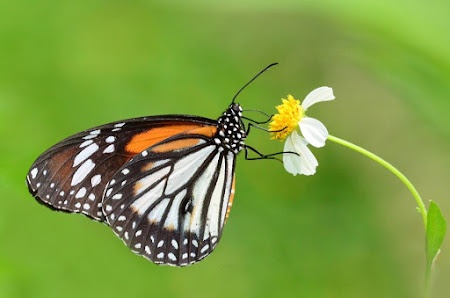