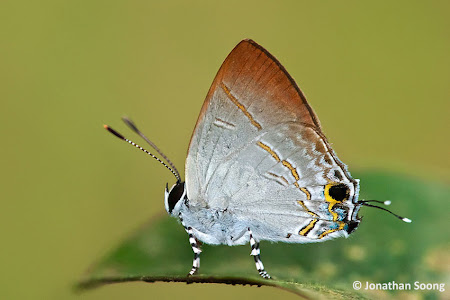 This small butterfly was a new discovery for Singapore when it was first discovered in 1995 during a survey. It is rather local in distribution in Singapore, preferring to remain in the shady understorey of the forested nature reserves. It can be considered a forest-dependent species, as it is rarely, if ever, seen in urban parks and gardens. At a glance it resembles the Common Tit or Dark Tit. However, having only two white-tipped filamentous tails will distinguish it from the four-tailed Common or Dark Tit.
Photographing this species is always challenging, as it prefers to lurk in areas where there is low light. Coupled with its small size and often having to deal with the light breezes under the forest canopy pushes the photographer and his equipment to the limit. This well-taken shot, by ButterflyCircle member Jonathan Soong, certainly does justice to this pretty little butterfly and demonstrates the skill and determination of the photographer too!
Posted by Commander at 12:00 PM 0 comments