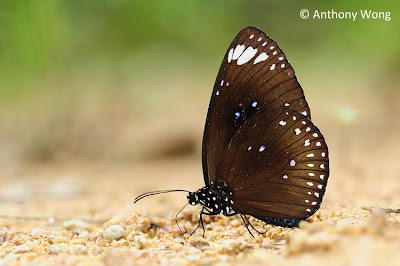 Physical Description of Adult Butterfly:
Above, the wings are blackish brown, usually without the blue sheen seen in other Euploea species. The termens are slightly crenulate and there are marginal and submarginal series of white spots, with submarginal spots in spaces 6, 7 and 8 rather large and elongated. on the forewings. There is also a white spot in the cell and a few distal spots. Underneath, the markings resemble those on the upperside. The male has a small and narrow brand in space 1b on the forewing and a pale yellowish scent patch in the cell area on the hindwing. 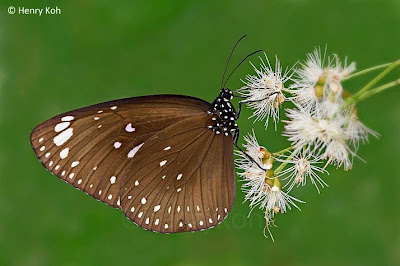 A Blue Spotted Crow feasting on the flowers of a Syzygium plant in the nature reserve. 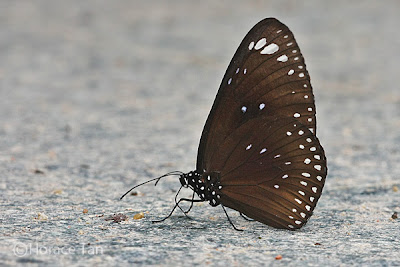 A Blue Spotted Crow puddling on the cement floor of a shelter hut in the nature reserve.

Field Observations of Butterfly Behaviour:
This Singapore subspecies of the Blue Spotted Crow is uncommon in Singapore, and is rarely seen. Sightings of the slow flying adults includes individuals or small groups visiting flowers and puddling. One rare occasions, several adults could be seen flying around shelter huts built alongside trails in the catchment area, with some even puddling on the cement floor of the shelters. Although mostly confined to the nature reserves, some individuals have also been observed in housing estates.

Early Stages:
Elsewhere in its range of occurrence, host plants recorded for this species are mainly members of the Apocynaceae family, examples are Strophanthus divariatus and S. divergens in Hong Kong, S. dichotomus, Nerium oleander and Roupellia sp. in Java. As for the singapura subspecies of the Blue Spotted Crow, thus far only one host plant, which has opposite leaves and pale yellowish sap (lactiferous), has been located in the local nature reserves. The caterpillars of Blue Spotted Crow feed on the young and tender leaves in its early instars but move on to the more mature and larger leaves in the later instars. 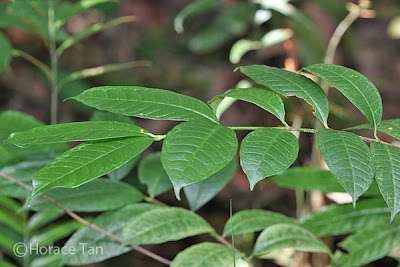 Local host plant for the Blue Spotted Crow found in the nature reserve.

The eggs of the Blue Spotted Crow are laid singly on the young leaves of the host plant, typically on the underside. The yellow eggs are tall (about 1.8mm in height) and somewhat cylindrical (diameter: 1mm) with a rounded top. The egg surface is ribbed. 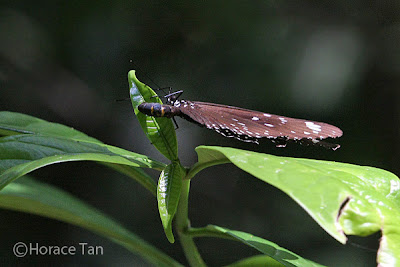 A mother Blue Spotted Crow laying egg on a young leaf of the host plant. 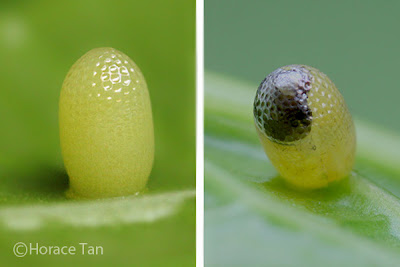 The egg takes about 3 days to hatch. The young caterpillar emerges by eating away part of the egg shell. The rest of the egg shell becomes the first meal for the newly hatched, which has a length of about 2.3mm. Its cylindrical body is pale yellowish. The large head capsule is black in color. A pair of short and inconspicuous protuberances can be found on the dorsum of each of the following four segments: 2nd and 3rd thoracic segments, 2nd and 8th abdominal segments. 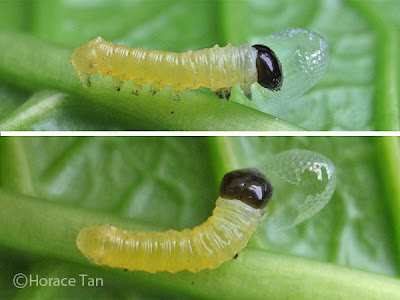 Once the newly hatched moves on to feed on the young leaves over the next few hours, its body starts to take on a green undertone. The growth is rather rapid with the body length doubling in one day, and after just 1 to 1.5 days from hatching, it moults to the 2nd instar. Towards the final hours of the 1st instar, the 8 protuberances turned orangy brown and become more marked in appearance. This period of growth also brings along blackened ends for all 8 pairs of legs. 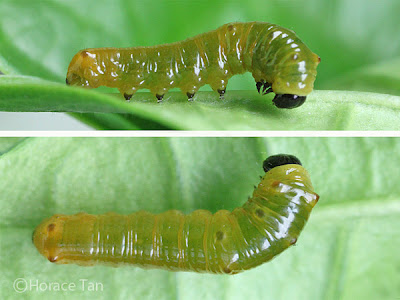 The body of the 2nd instar caterpillar is again yellowish orange with a green undertone. The most obvious change is the lengthening of the 8 protuberances to short processes, each of which is almost entirely dark brown to black. There are two small brown spots on the dorsum of the prothorax, and one large black patch on the posterior end of the body. This instar lasts only 1 to 1.5 days with the body length reaching 11mm before the moult to the 3rd instar. 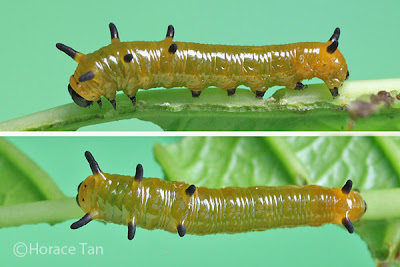 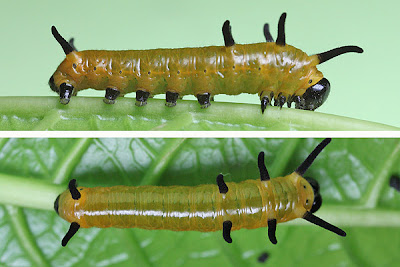 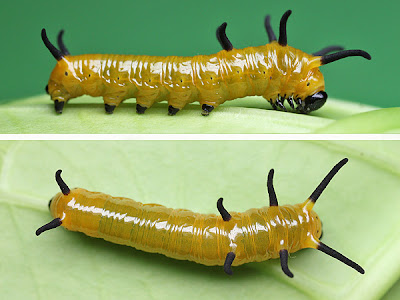 Retaining very much the same body features from the earlier two instars, the 4th instar caterpillar distinguishes itself in having proportionally longer processes which have the tendency to flex forward with ends slightly curved. This instar lasts 1.5 to 2 days with the body length reaching about 27mm. 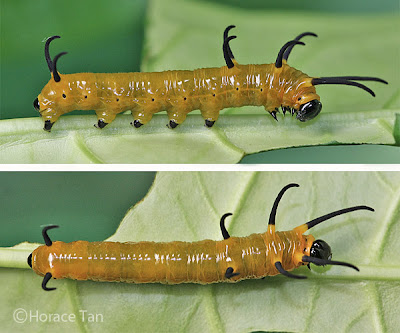 Two views of a 4th instar caterpillar, late in this stage, length: 27mm.

The 5th and final instar brings along a slightly more dramatic change in appearance. Now the 8 processes have become very long and filamentous, with the tapering ends having a strong tendency of twirling. The spiracles have also become more prominently marked in large black spots. 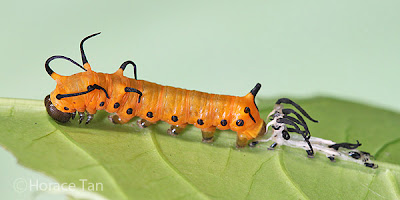 A newly moulted 5th instar caterpillar, with its exuvia trailing behind.

One surprising and exciting find during this breeding exercise is the discovery of adenosma being present in this Euploea species, a first for the Danainae subfamily. The Blue Spotted Crow caterpillars, at least for the singapura subspecies, readily flash their adenosma when they are disturbed. This yellow-colored adenosma could be easily observed in both the 4th and 5th instars. Refer to the pictures and youtube clip below for an illustration of this adenoma, which is located just ahead of the 1st pair of the thoracic legs. As can be seen in the pictures, the caterpillars of Blue Spotted Crow also adopt the characteristic on-guard posture with the anterior body arched and the head tucked beneath the thorax. 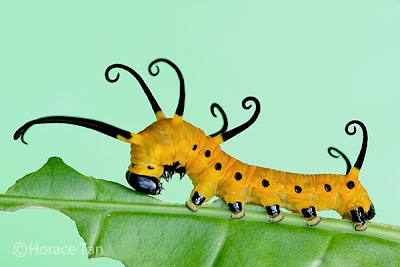 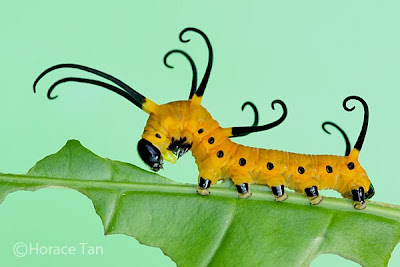 The same caterpillar as in the earlier picture, this time with its adenosma everted.

The eversion of the adenosma of a 4th instar caterpillar of the Blue Spotted Crow. 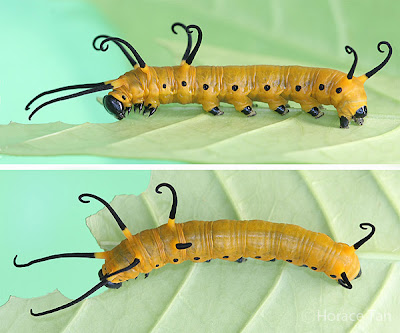 The 5th instar lasts for 4-5 days, and the body length reaches up to 47mm. On the last day, the caterpillar ceases feeding, and its body becomes shortened but with no change in body color. It wanders around in search of a pupation site. Typically it comes to a halt on a branch/stem or a leaf underside, where the caterpillar spins a silk pad from which it soon hangs vertically to take on the pre-pupatory pose. Within the few hours prior to pupation, the caterpillar gradually relaxes and lengthens to a straight posture. Waves of contraction soon travel from the the rear end to the head until the pupation event kicks in. 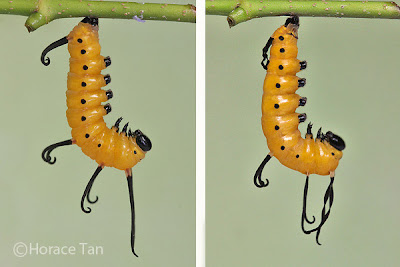 The pupation event of a Blue Spotted Crow caterpillar (shown at 10x speed).
Pupation takes place 0.5 days after the caterpillar assumes the hanging posture. Typical of the pupae within the Nymphalidae family, the pupa of the Blue Spotted Crow suspends itself from the silk pad with no supporting silk girdle. Initially, the pupa is bright yellowish orange, but the surface gradually takes on a silvery metalic glitter about a day later. The pupa is rather rotund, and has a few black spots and dark brown patches on the dorsum. Length of pupae: 20-22mm. 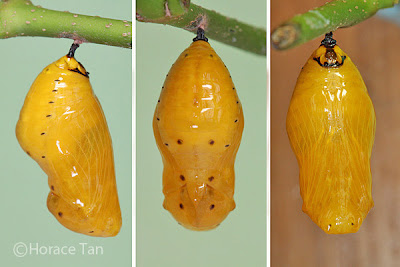 Three views of a fresh pupa of the Blue Spotted Crow. 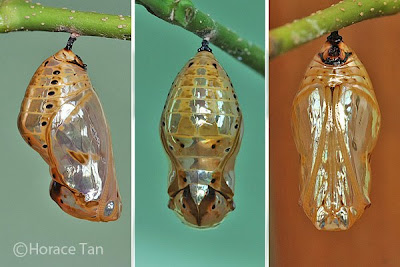 Three views of a shining pupa of the Blue Spotted Crow. 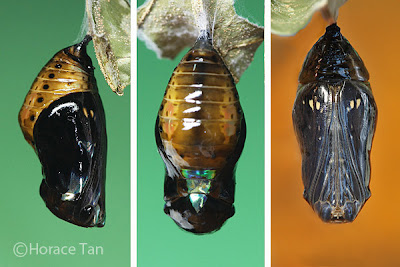 Three views of a mature pupa of the Blue Spotted Crow.
The prominent submarginal spots can be seen in the wing pad area.

After about 6 days of development, the pupal skin turns translucent as the development within the pupal case comes to an end. The spots on the forewing upperside also become discernible. The following day, the adult butterfly emerges from the pupal case. It then perches nearby to expand and dry its wings before taking its first flight. 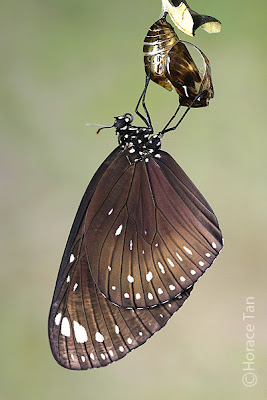 A newly eclosed Blue Spotted Crow drying its wings on its pupal case. 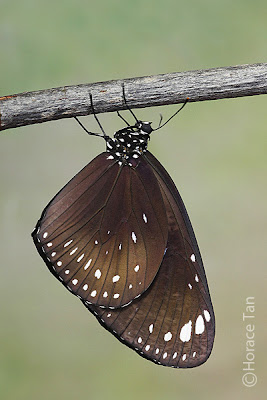