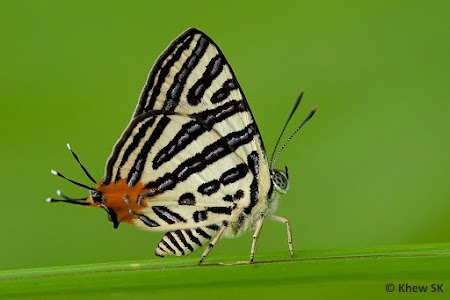 The hot humid weather at the height of the summer months seems to have brought out a relatively good season of butterflies across the region. There has been a good series of butterfly postings on our FaceBook Group from Vietnam to Thailand, Malaysia and Singapore. It would be interesting to trace butterfly activity over the years and ascertain the effect weather patterns have on the abundance and diversity of species across the region. 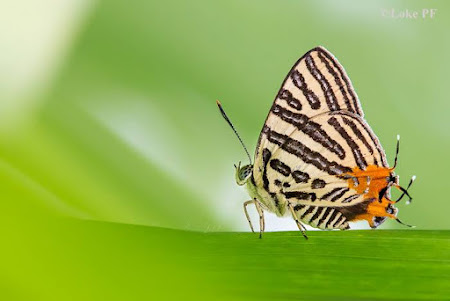 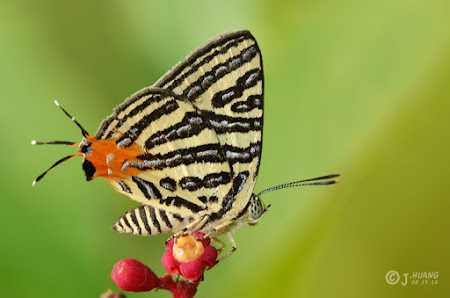 Reading the headlines on news portals over the past few weeks can be rather depressing as the series of terrorist and other disastrous events caused by psychotic individuals (or groups) continued to hit the news. First it was Orlando. Then Nice. And Bavaria. Munich. Kabul. Fort Myers. Sagamihara. And the coup in Istanbul. One author calls it 'toxic masculinity'. She goes on to say "Toxic masculinity finds expression in fascism, sexism, white supremacy, Islamophobia, xenophobia, jingoism, capitalism, homophobia, rape culture and patriarchy, in the glamourisation of military culture." 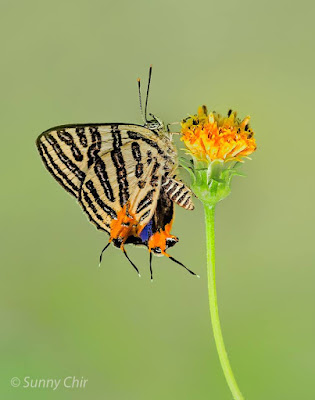 And then there was the recent arrest of 6 suspects who were in the process of launching a rocket from nearby Batam island in Indonesia towards Singapore. Whilst some netizens laughed it off as "additional fireworks" for Singapore, as our island nation celebrates our National Day next week, authorities are not amused. The threat is indeed real, and I recall one retired Minister saying "it's not the size of the explosion that is of concern, but the signature of the blast". Food for thought... as far as our hitherto safe Little Red Dot is concerned. 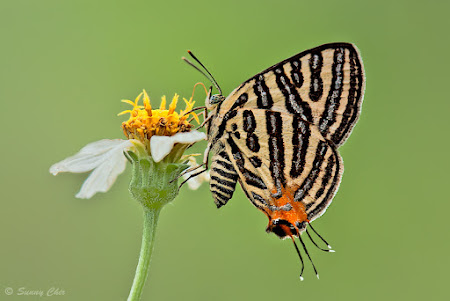 Our Prime Minister's visit to the US made the news in the past week, showcasing the close diplomatic ties and support between the US and Singapore over the years. All the more apt, as the US is on the threshold of a change in the Presidency and no one can predict how the world's biggest economic power will view our part of the world, as far as its future foreign policy is concerned, particularly towards Asia. It's something that will be closely watched as Americans go to vote soon. Interestingly, an unlikely dinosaur-themed denim pouch stole the news limelight after Ho Ching carried it to the official arrival ceremony at the White House in Washington DC. The S$14.80 pouch, designed by Seetoh Sheng Jie, who has autism, created more buzz on the news portals than one could ever imagine such a humble pouch would! Goes to show that the value and meaningfulness of one's actions and material possessions are more important than their cost and opulence. 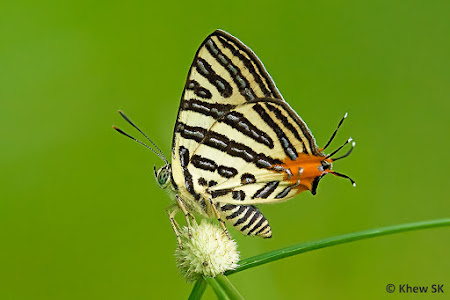 Let's turn to our Butterfly of the Month for August 2016, which is Singapore's 51st birthday after independence. This month, we feature a small but attractive butterfly from the Aphnaeinae subfamily of the Lycaenidae family - the Club Silverline (Spindasis syama terana). This is one of two species of the Silverlines that are found in Singapore. 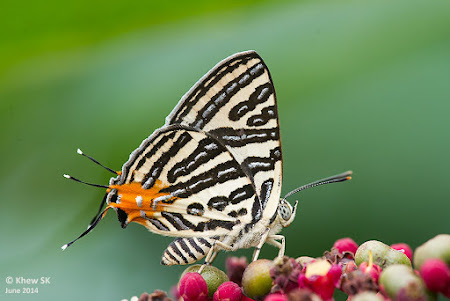 Both the Club Silverline and its closely-related cousin, the Long Banded Silverline (Spindasis lohita senama) are more often found in urban parks and gardens than in the forested nature reserves of Singapore. The Silverlines are characterised by their banded appearance on the undersides of their wings, centred with attractive silvery markings. The hindwing bears a pair of delicate filamentous white-tipped tails. 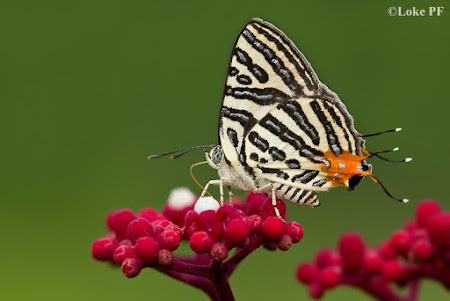 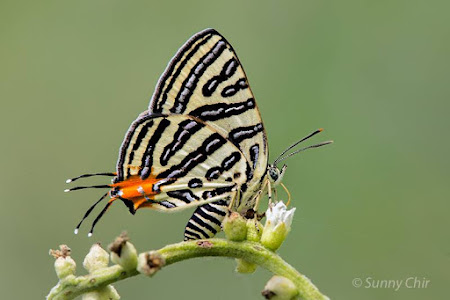 Both species can be considered 'moderately common' and often frequent the same locations. The caterpillars feed on a variety of plants. The Club Silverline is a fast-flyer and is regularly seen feeding on the flowers of the Red Tree Shrub (Leea rubra) and StringBush (Cordia cylindristachya). At times, if disturbed, it flies off quickly and perches on the underside of a leaf to hide itself. 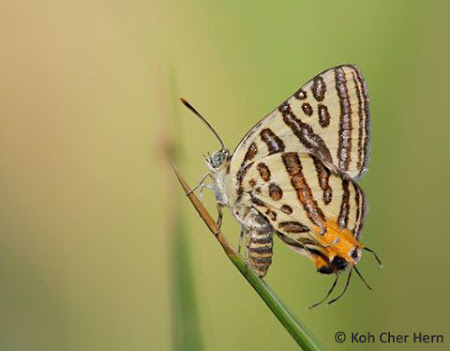 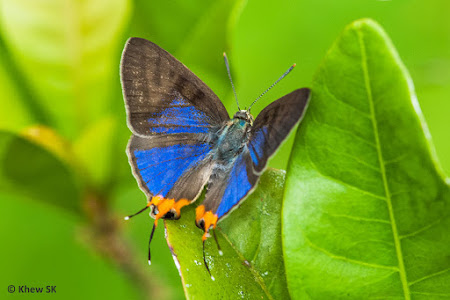 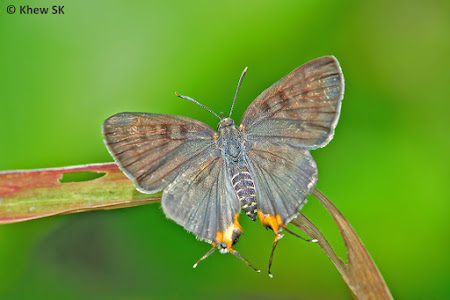 Male and female Club Silverline sunbathing, showin the uppersides of their wings

The male is deep aquamarine blue on the upperside with broad black apical borders on the forewing. The female is a dull steely-blue above and generally unmarked, although the underside markings can often be perceptible through the wings. The underside is an whitish-cream ground colour with black streaks infilled with silvery streaks.  In some individuals, the black streaks may be replaced with burgundy streaks instead (more like the Long Banded Silverline) 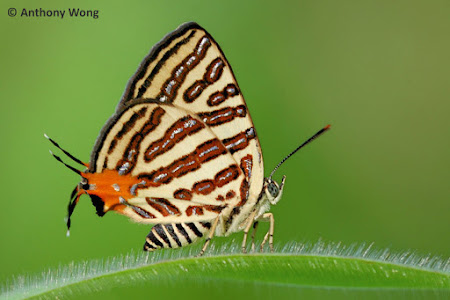 The distinguishing markings between this species and its closely-related cousin, the Long-Banded Silverline, can be found in the basal area on the underside of the forewing. The basal streak is L-shaped in the Long Banded Silverline, but club-shaped in the Club Silverline. The hindwing has two white-tipped tails emerging from a prominent orange tornal patch 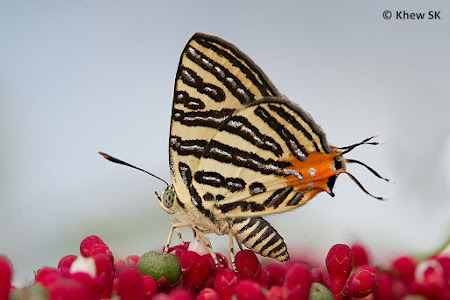 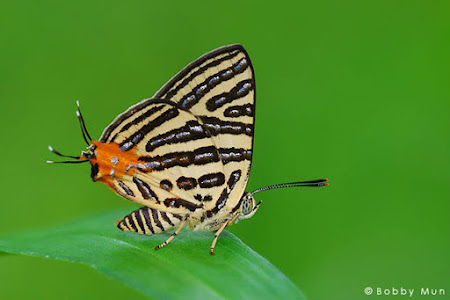 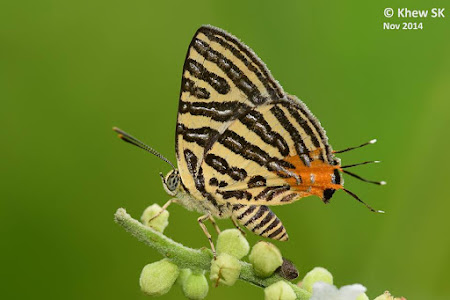 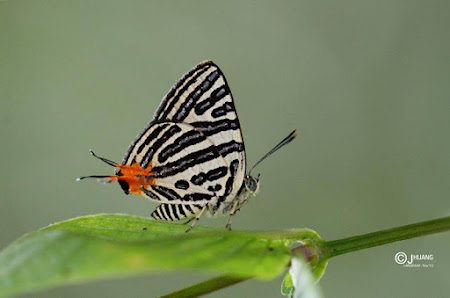 On behalf of ButterflyCircle members, we would like to take this opportunity to wish all our Singaporean readers a Happy 51st Birthday on our National Day on 9 Aug 2016! 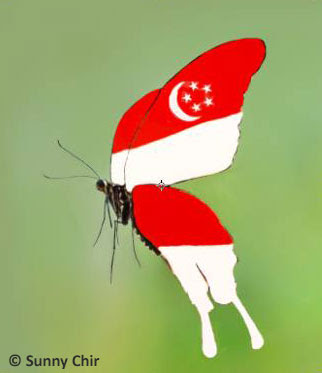 Posted by Commander at 7:10 PM 0 comments