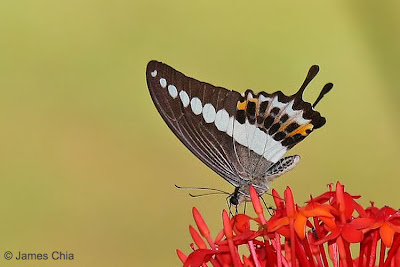 As we cross into the month of June and head towards the middle of the year 2010, the International Year of Biodiversity, it has indeed been a busy half year for ButterflyCircle. The addition of a long-lost species to the Singapore Butterfly Checklist is one of the highlights so far, and we look forward towards the 300 species mark for Singapore. 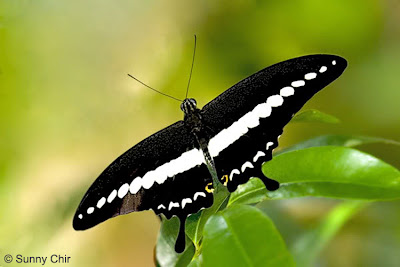 The summer solstice normally falls on June 21st (sometimes the 20th). In the northern hemisphere this is the day with the most daylight. After this date the days begin to get "shorter". This is also the first day of summer. 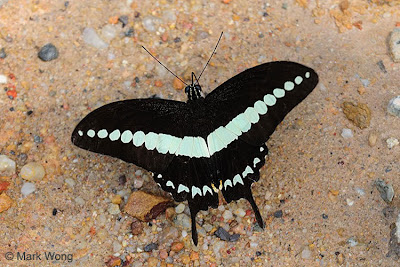 Butterflies continue to be "in season" as the normally drier months of the year begin to make way for the winds where the South-West monsoons bring heavy rains to the region. For the first time in many years, even the famous Orchard Road in Singapore was flooded! 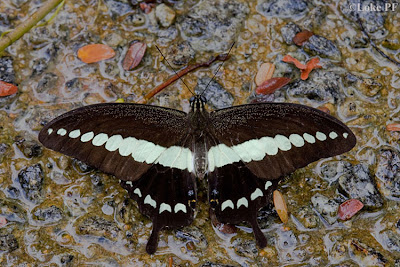 This month, we feature another member of the Swallowtail family, the Banded Swallowtail (Papilio demolion demolion). This fast-flying Papilionidae has black wings with a pale greenish macular band extending from the apex of the forewing to the mid-dorsum of the hindwing. The hindwing has a series of pale greenish lunulate submarginal spots and a black ocellus ringed with orange-red at the tornal angle. There is a long spatulate tail at the hindwing. 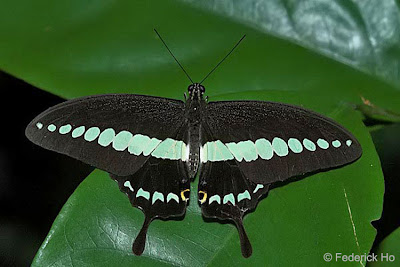 The butterfly can be found in the fringes of the nature reserves, flying erratically up and down sunlit paths. It is often observed flying from flower to flower, feeding on nectar from Ixora and Lantana flowers in a very hurried manner. In Singapore, males of this species are observed puddling only on infrequent occasions, unlike the typical behaviour of many other male Papilionidae species.

Although difficult to photograph when in full flight whilst feeding on flowers, a frequently observed habit of the Banded Swallowtail is that it stops to rest in shaded areas with its wings opened flat after a bout of active flying. This presents a good opportunity to photograph it if one is able to approach it stealthily without scaring it off. It is usually skittish and any sudden movements would definitely trigger it off into its high-speed flying routine again. 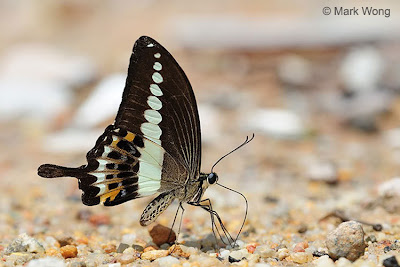 Males and females are generally similiar in appearance with the exception of the lunule in space 2 of the hindwing, where it is reddened in the female). A unique feature of this species is that the female lays her eggs on top of one another in the form of a rod. The caterpillars feed on at least two species of Rutaceae, of which one species is a Citrus. Unlike the majority of the Papilionidae, the early instars of the caterpillars of the Banded Swallowtail tend to feed gregariously and often move like a herd with the caterpillars following one another moving in single file, following the lead caterpillar. 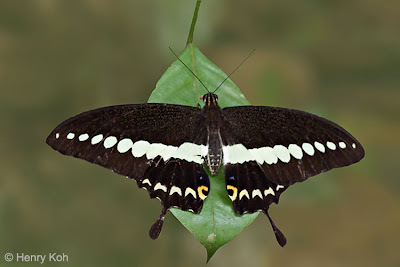 The Banded Swallowtail can be considered moderately common in Singapore, although more often than not, only single individuals are encountered. 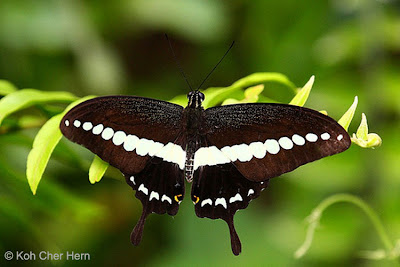