Butterfly of the Month - January 2015 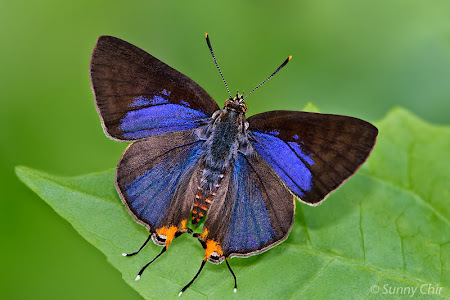 A new year has begun! 2015 has started cautiously for the global economy, with the falling oil prices threatening to dampen and even negatively affect many countries' economic recovery and growth. Whilst only certain countries are feeling the effect on their currencies, the world today is inextricably connected in terms of bilateral trade and economic cooperation, and when more countries are affected, it is likely that even those which appear unscathed will feel the strain. Oil is a mineral that affects practically every aspect of our daily lives and it is hard to escape any severe fluctuations in price - whether up or down. 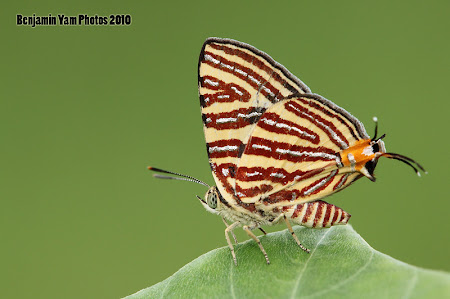 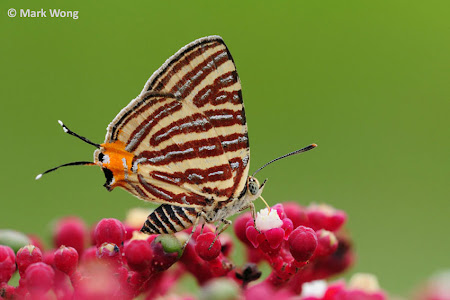 Towards the end of an eventful 2014, a third plane disaster struck in our Southeast Asian region. Whilst we thought that two crashes affecting Malaysian Airlines Flights 370 and 17 was more than any country can take in terms of loss of innocent lives in civilian crashes, the AirAsia flight QZ8501 crash was something totally unprecedented for Malaysia in terms of a single country's flight safety record in a single year. The Airbus A320 plane carrying 162 passengers and crew from Surabaya to Singapore did not make it, and it is feared that everyone on board perished in the crash. 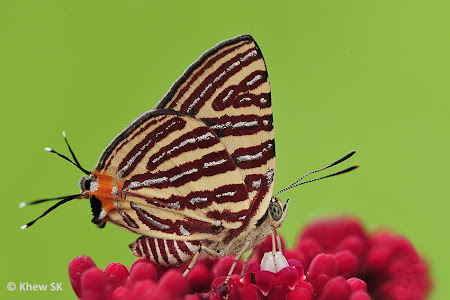 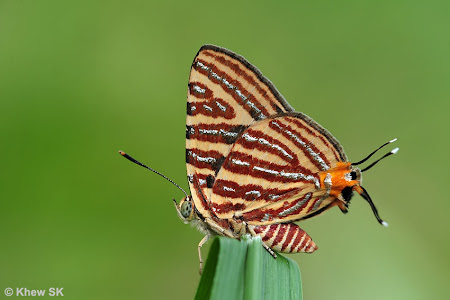 Murder (in whatever form you call it) in the name of religion continues to rear its ugly head even as the New Year celebrations to herald 2015 were still fresh in our minds. This time, extremists or terrorists, massacred 12 people in the unlikely city of Paris. Angered by the satirical cartoons of the the newspaper Charlie Hebdo, which purportedly pokes fun at Islam (and other religions and political leaders), two fanatical brothers stormed and shot dead a number of the cartoonists at the office of the newspaper, along with some police personnel as well. 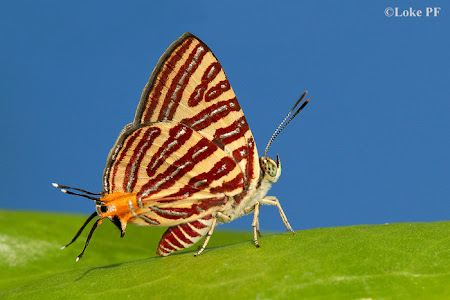 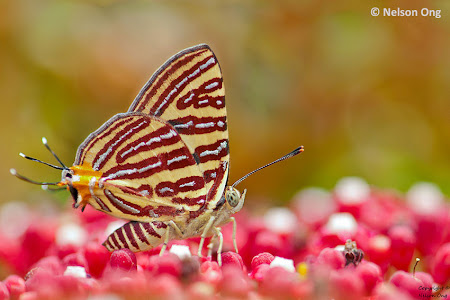 "These madmen, fanatics, have nothing to do with the Muslim religion," France's President Francois Hollande said in a televised address. Indeed. Which religion's God teaches its subjects to murder innocent unarmed people? This form of extremism is not expected to go away in 2015. If anything, it will worsen as the world struggles with intolerance and human ego - driving fanatics to continue to eliminate people who do not subscribe to their way of thinking. 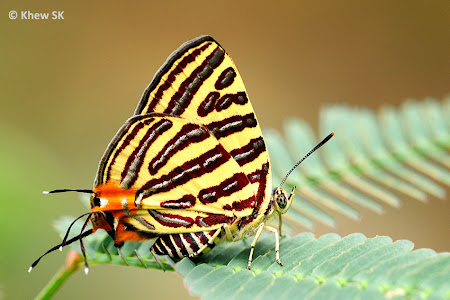 This month, January 2015, we continue with our long-standing series of featuring a butterfly species every month. Our 87th butterfly species to take the limelight on our blog is the Long Banded Silverline (Spindasis lohita senama). This small, but very attractive butterfly starts our new year with a bit of optimism and hope for the year ahead. 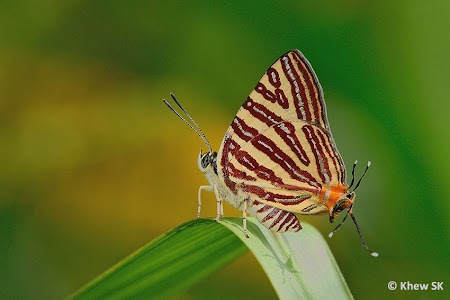 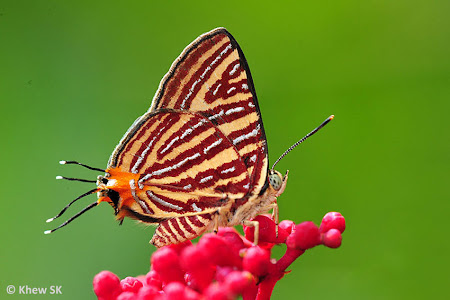 The Long Banded Silverline belongs to the family Lycaenidae, often known by its generic name of "Blues and Hairstreaks" - featuring many small sized butterflies with prominent tails. The tails and eyespots on the hindwings of the family Lycaenidae are often described to perform the function of a decoy which fools predators into attacking the "wrong" part of the butterfly, thereby allowing the butterfly to escape a fatal blow to its real head. 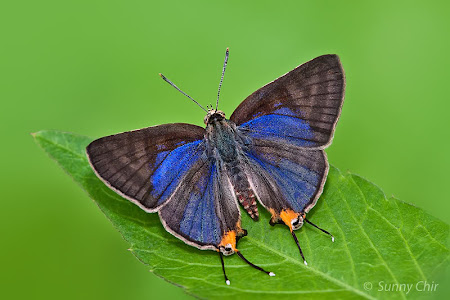 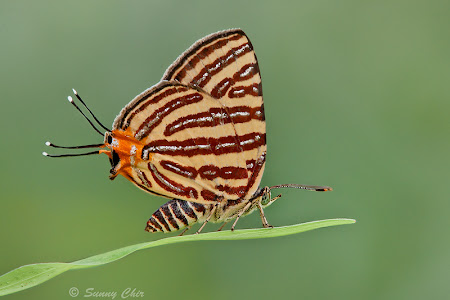 Our feature butterfly of the month is one of a few species which is attractive both on the upper and underside of the wings. There are many species showing beautiful bright colours and patterns on either the upper or underside, but not many species features such beauty on both. 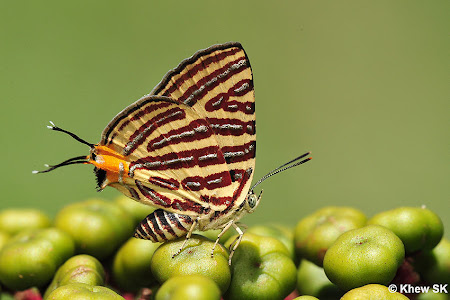 The Long Banded Silverline is one of two species of the genus Spindasis found in Singapore. Both species are widely distributed, and can be found more regularly at urban parks and gardens than in the forested nature reserves of Singapore. The Silverlines are characterised by their banded appearance on the undersides of their wings, centred with silvery markings. The hindwing bears a pair of delicate filamentous white-tipped tails. 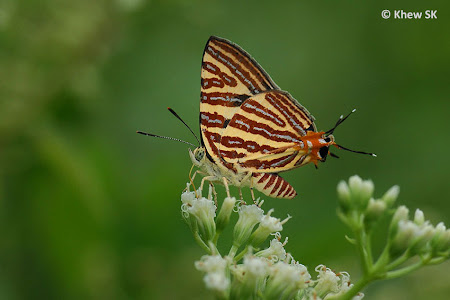 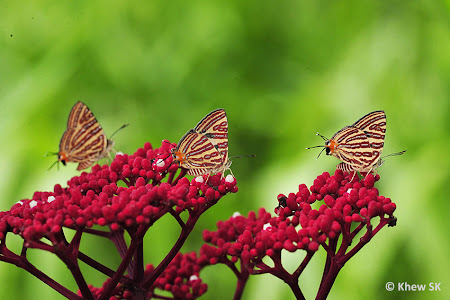 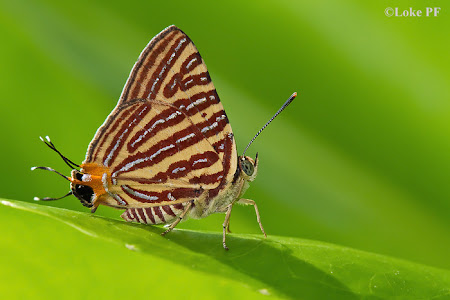 The butterfly is moderately common, and at times, several individuals are spotted together. The Long Banded Silverline is a fast-flyer, but often stops to perch at its favourite leaf or branch repeatedly. At rest, they often stop with their wings folded upright. However, when conditions are right at certain hours of the day, they can be observed to open their wings to sunbathe. 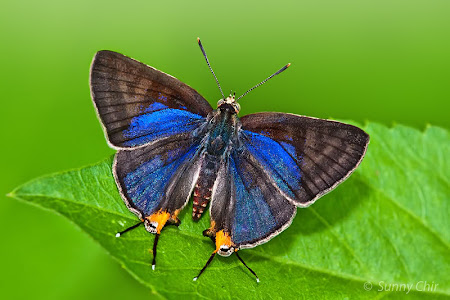 A male Long Banded Silverline showing off its upperside


The male of the Long Banded Silverline is deep blue above with broad black apical borders on the forewing. The female is a plain brownish-blue above and generally unmarked, although the underside markings can often be perceived through the wings. The underside is an yellowish-cream ground colour with red streaks infilled with silvery streaks. 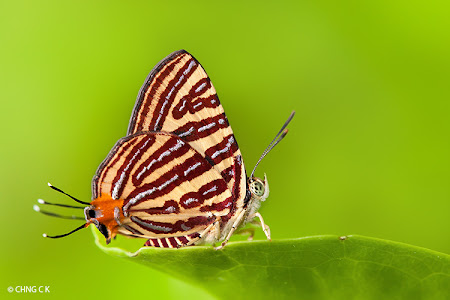 The distinguishing markings between this species and its closely-related cousin, the Club Silverline (Spindasis syama terana) can be found in the basal area on the underside of the forewing. The basal streak is L-shaped in the Long Banded Silverline, but club-shaped in the Club Silverline. The hindwing has two white-tipped tails emerging from a prominent orange tornal patch. 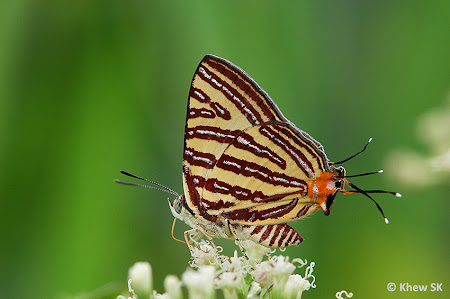 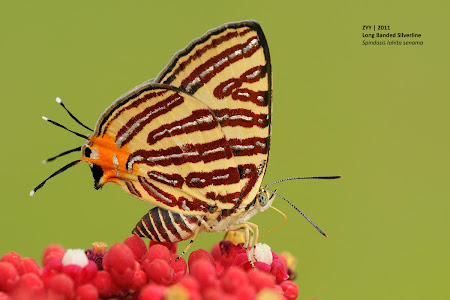 
The Long Banded Silverline can often be observed feeding on the flowers of the Bandicoot Berry (Leea indica) and the Red Tree Bush (Leea rubra). In other areas, we have seen a number feeding on the inflorescence of the Mile-A-Minute creeper (Mikania micrantha). 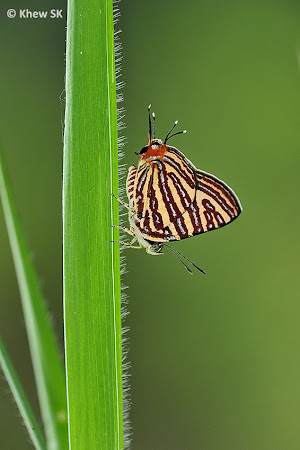 
When disturbed, the butterfly flies rapidly and hides under a leaf. At times, it also displays this habit of perching on the underside of a leaf, upside down. When at rest, individuals are also often observed to stop on a vertical perch with its head facing downwards. This may be related to a defensive behaviour of posing with its "false head and eyes" facing upwards to fool predators into attacking that part of the wings. 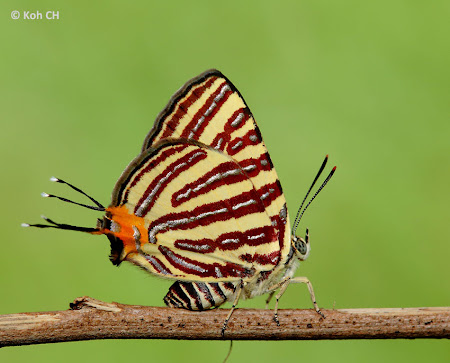 This species' caterpillars have been successfully bred on a number of host plants that include the guava and Singapore Rhododendron. It is also believed to be able to breed on the exotic Australian tree, Acacia auriculiformis which can be found growing wild in many parts of Singapore, where a female of the species was observe to be ovipositing on a leaf of the tree.