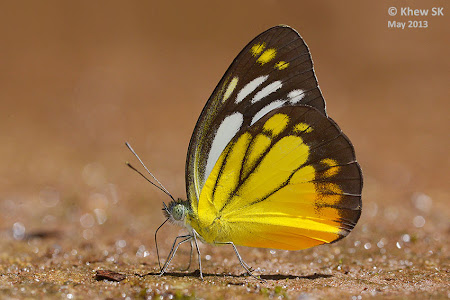 The Orange Gull is a distinctive Pierid in that the whole of the underside of the hindwing is yellow with the tornal area dark orange and brown marginal borders.  It is not likely to be confused with any other species in the family when at rest.  On the upperside the wings are predominantly white with black veins but the tornal half of the hindwing is a bright yellow. The species is often observed puddling at sand banks with other butterflies. 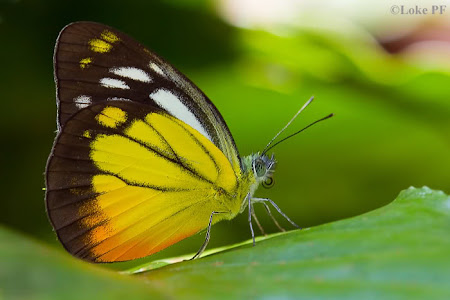 This species was recorded in Singapore by the early authors, and has been described in C&P4 as "widely distributed on the plains in Malaya, occurring from the Langkawi Islands in the north to Pulau Ubin and Singapore in the south." However, the Orange Gull has not been reliably seen in Singapore since the early 90's, and there has been no sign of it on Pulau Ubin either. It is not known why this relatively common Pierid disappeared from Singapore. Will it be back here again one day? Or will it remain only in our memories and is gone forever from Singapore?
This is the 500th post on this blog.