Life History of the Lime Butterfly


An updated version of the life history of the Lime Butterfly is available by clicking on this link. 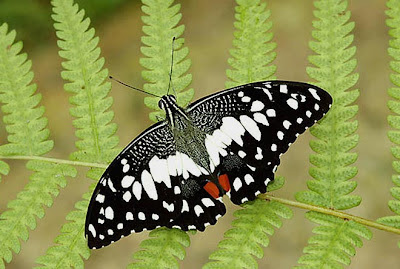 
On the upperside, the wings of the Lime Butterfly are black with large yellow markings. These form an irregular macular fascia running from the apex of the forewing to the mid-dorsum on the hindwing, and there is a series of yellow submarginal spots on both wings. At the bottom of the hindwing (space 1b) is a red spot with an anterior narrow blue lunule. As for the female, this blue lunule forms the anterior portion of a large black circular spot above the red spot. The underside is predominantly yellow with a series of reddish post-discal bars on the hindwing.


This butterfly is common in gardens wherever the host plants of the species, Citrus spp. are cultivated. It is a strong flyer with a rapid erratic flight. It flies from flower to flower in search of nectar. Like many Papilionidae it has a characteristic flight when feeding, in that whilst the forewings are flapping rapidly, the hindwings are held almost stationary as if to balance the butterfly perched on a flower as it sucks nectar from the flower with its long proboscis.


In the cool morning hours, the Lime Butterfly may be found resting amongst shrubbery, sunbathing with its wings opened flat, as if to warm up before taking flight and going about the day's business.


An interesting phenomenon, particularly in the more affluent Asian countries, is that during the Lunar New Year celebrations, the Lime Butterfly appears to be more common than usual, due to the discarded Citrus plants which are traditionally purchased with the orange fruits ripened, to signify wealth during this Chinese festival. With the abundance of its host plant during this season, the female Lime Butterfly will waste no time ovipositing on the available host plants. 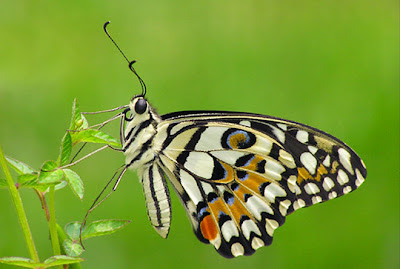 
The eggs are oviposited singly on the young leaves of the Citrus host plant. The egg is smooth, round and yellowish in colour, measuring around 1mm in diameter. 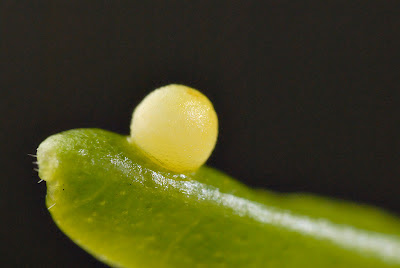 The egg of Lime Butterfly


After about 3-4 days, the caterpillar hatches from the egg, and immediately starts to consume the eggshell completely. The caterpillar then starts to eat the young leaf that the egg was laid upon.


The 1st instar caterpillar has a spiky appearance. The colour of its body is brown with yellowish-white markings with white hairs. As it feeds, the caterpillar usually stays in the middle of the upper side of the leaf. The first few instars of the caterpillar resemble bird droppings where it escapes predation by camouflaging itself in this manner. 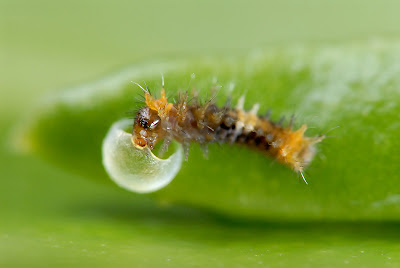 
As it moults into the 2nd instar, the dirty greenish-brown colour of its body remains similar as the 1st instar except that the saddle white band has widened somewhat. The hairy spikes of the 1st instar now take a more solid rubbery appearance. 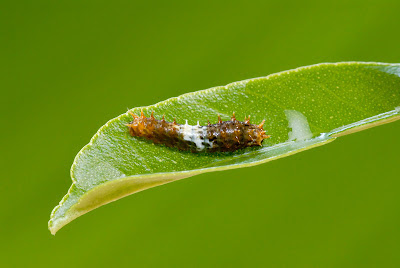 
In the 3rd instar is essentially similarly patterned as the 2nd instar. The colour of its body becomes richer, with white patches appearing near its head and last abdominal segments. It has an oily glossy appearance. 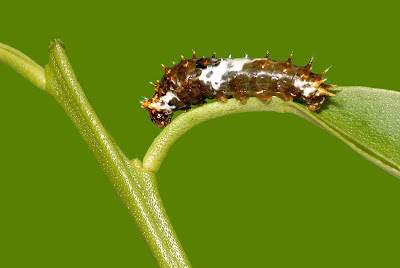 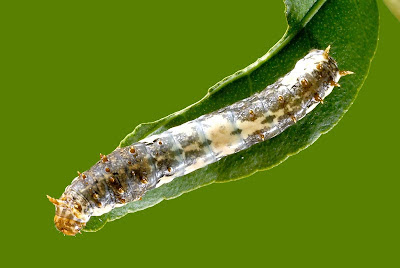 
In the 5th or final instar, the caterpillar becomes a plain uniform green with a few dark brown markings. It has a pair of false "eyes" near its actual head, appearing much larger and fiercer to ward off predators. Also, when disturbed the caterpillar extrudes a pair of orange-yellow processes from the segment just behind the head, known as osmeterium, to alarm would-be predators. 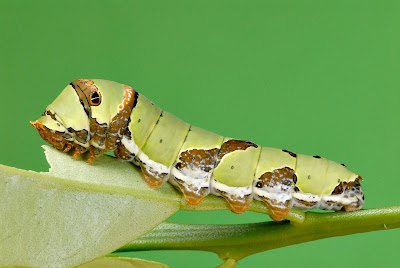 After a total of 11 days upon hatching from the egg, the caterpillar then goes into a day of dormant pre-pupation pose after carefully selecting a perch onto which it can pupate upright. 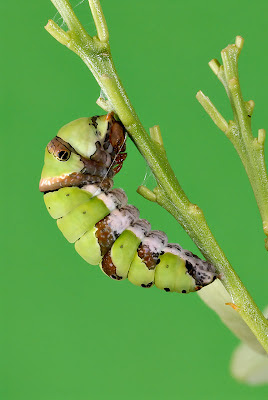 Pre-pupa of the Lime butterfly


The pupa is light green with two projections to the front on its head and also one on its thorax. The abdominal segments are a bright lime green as opposed to the toned down green of the rest of the pupa. A silken girdle helps the pupa stay in an upward position. 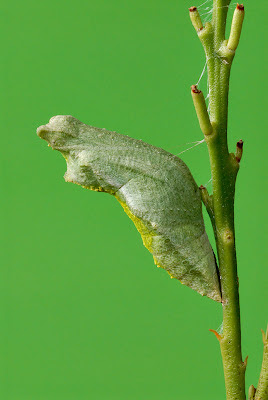 
After about 10 days, the pupa shell turns transparent and the wings of the butterfly can be seen through the semi-transparent pupa shell.


Upon eclosion, the adult butterfly emerges and hangs its wings out to dry, as it pumps fluids into the wings to expand them. When its wings are sufficiently dry and hardened, usually after about an hour or more, it takes its maiden flight. 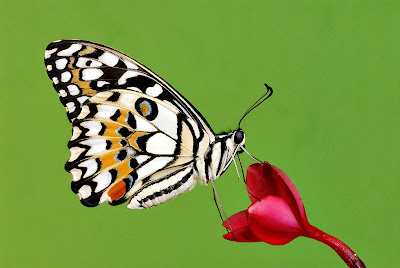 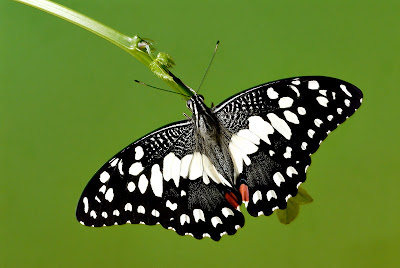