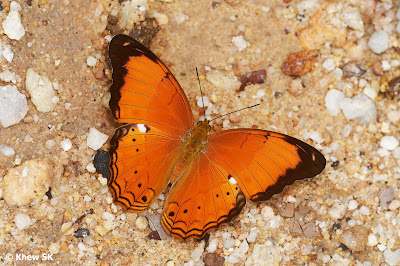 A Malay Yeoman puddling at a sandy streambank
Almost a third of 2021 has flown by, and the world is still playing a see-saw game with Covid19. Whilst the virus is under control in some countries, others are just beginning to feel the wrath of the virus.  A grim reminder to be constantly vigilant and not succumb to complacency. The surge of infections in India over the past week has cause for concern, and many countries, including Singapore have revised their border controls with India. 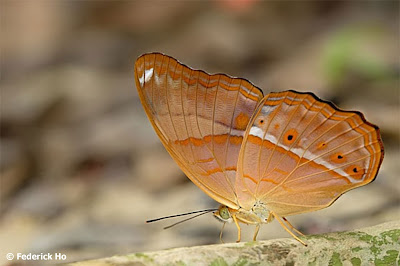 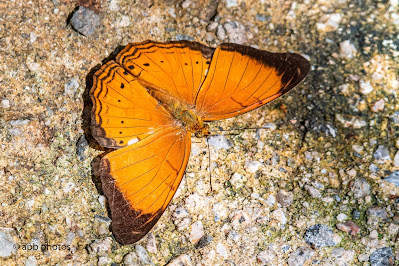 The appearance of a "double-mutant" and a potentially more contagious version of the virus in India is under close scrutiny. Mutations in the spike gene can make the virus inherently more efficient at infecting people or can help the virus to escape neutralising antibodies. This means if the virus mutates in the "right way", it can reinfect someone who has already recovered from Covid-19, or render some of the current vaccines ineffective. 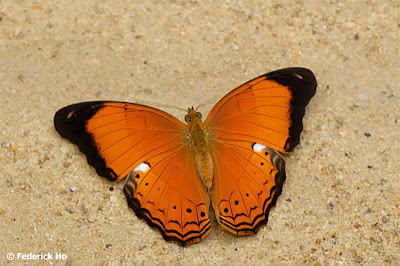 The US still takes the pole position with the number of confirmed infections at over 32 million of the population in America, outpacing even India by twice the number of infections. Although vaccination numbers are steadily climbing across the world, it is as though the virus is keeping pace with the "remedies" by constantly mutating and possibly out-maneuvering the vaccines that have been rolled out in many countries. Sounds like a sci-fi movie? 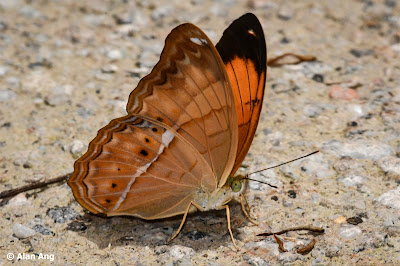 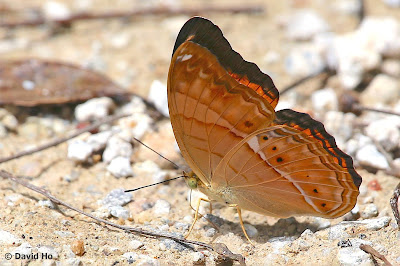 Puddling Malay Yeomen shot at the Dairy Farm area in Singapore
Over in Singapore, whilst the situation appears to be under control and life in our city is beginning to feel like "normal" again, the appearance of the South African and UK strains of Covid19 positive infections within the community is cause for concern. Whilst the government is slowly easing on the safety measures, there is always the possibility of reverting to more draconian controls if the number of infections should suddenly spike again. 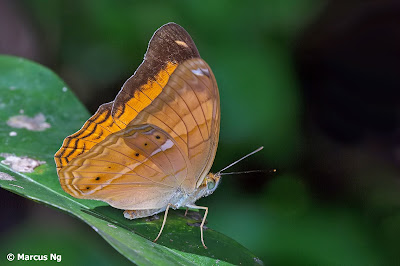 A Malay Yeoman perched on a leaf with half-opened wings in the Central Catchment Nature Reserves
Recent reports of positive infections in either recovered individuals or fully-vaccinated residents showed that the virus works in strange ways and there are no absolute guarantees in any mitigation measures, vaccinations included. A visitor to Singapore today would encounter a city of "masked men and women" as it is still mandatory to wear a mask in the community. 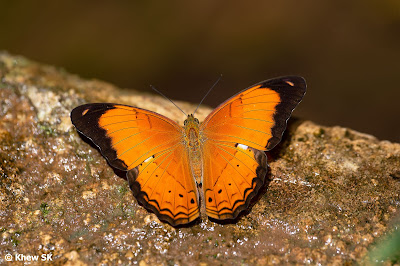 Back to our Butterfly of the Month for April 2021, the Malay Yeoman, a butterfly that was recorded as a re-discovered species in Nov 2013. This species is not uncommon in Malaysia but was considered as a "species which, so far as known, have not been taken again in Singapore in the 20th century". Today, the Malay Yeoman has been quite regularly sighted, mainly in the forested areas within the Central Catchment Nature Reserves and Bukit Timah Nature Reserve. 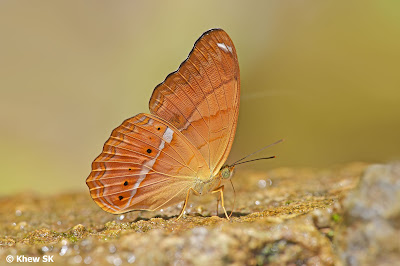 A Malay Yeoman puddling at a damp rocky path
The Malay Yeoman is a fulvous orange on the upperside with black marginal borders on both wings. A distinctive orange subapical spot on the forewing above is a diagnostic feature of this species that separates it from its lookalike cousins. The underside is a paler silvery orange with the post-discal band that is constricted at spaces 5 and 6 on the hindwing. 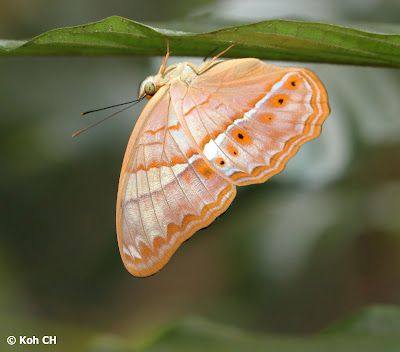 When illuminated by a flash, the underside of the Malay Yeoman shows a silvery sheen
The species is often found in forested areas and in Singapore, may be mistaken for the male Cruiser (Vindula dejone erotella), which is a much more common species. The Malay Yeoman, however, is smaller and is sometimes observed to perch under a leaf with its wings folded upright. It was believed to be a seasonal migrant after its re-discovery in 2013, but it appears that a small breeding population has established itself in Singapore today. 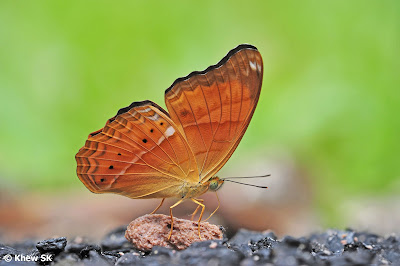 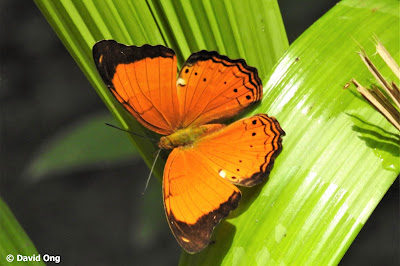 Males of the Malay Yeoman are regularly spotted to puddle at damp sandy streambanks or muddy footpaths. On hot sunny days, they are sometimes seen perched on the tops of leaves in the forested areas with wings fully opened to sunbathe. When alert, the species is skittish and hard to approach.  The best time to photograph the Malay Yeoman is when they are puddling.
Text by Khew SK : Photos by Alan Ang, David Ho, Federick Ho, Khew SK, Koh CH, Marcus Ng and David Ong

Posted by Commander at 6:24 PM 0 comments