Tiger Refresh!
An Update of the Flying Tigers of Singapore 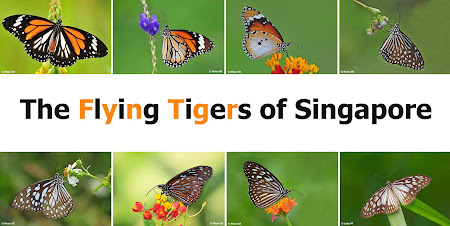 Some time back in January 2008, our weekend blogpost featured the Flying Tigers of Singapore. More than 11 years ago, there were 5 extant Danainae species that were referred to as "Tigers". Their common names probably originated from their striped appearance, and in some of the cases, the orange colour and/or stripes, reminiscent of the Malayan "Pak Belang". 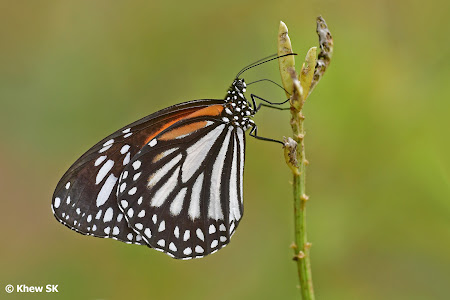 Over the years, at least three other species appeared in Singapore and were spotted by eagle-eyed butterfly watchers and photographers. All these species have been classified as vagrants as sightings of them have been infrequent, and in some cases, only from a single chance encounter. 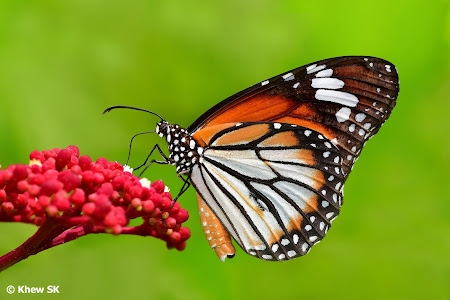 The Tigers belong to the subfamily Danainae, relatively large and slow-flying butterflies that are usually distasteful to predators. This is due to their caterpillar host plants that are lactiferous and in most cases, contains toxic substances which the caterpillars sequester to give themselves a "chemical protection" against predators. 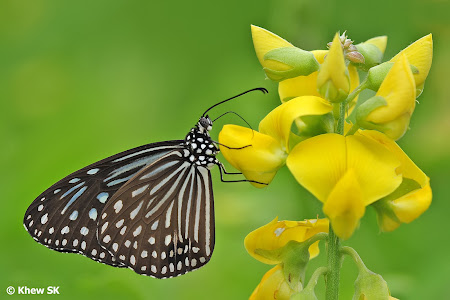 The majority of species in the subfamily Danainae also display aposematic colouration, which is nature's way of communicating to would-be predators that the butterfly should be avoided, unless the predator is asking for some trouble. The characteristic stripes, iridescent colours or bright and showy colours of the Danainae are good examples of aposematic warning colouration that other butterflies and moths mimic to provide some measure of protection for themselves. 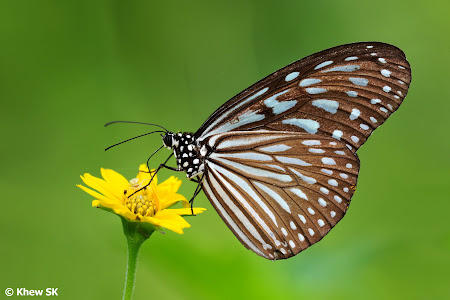 Today, the 5 extant species of Tigers that we featured in the 2008 blogpost are still doing fine, and over the past decade, where urban parks and gardens have cultivated more Tiger-friendly host and nectaring plants, they have become more common. These five species - The Plain Tiger, Common Tiger, Black Veined Tiger, Blue Glassy Tiger and Dark Glassy Tiger are still often seen feeding at the flowers in parks and gardens. 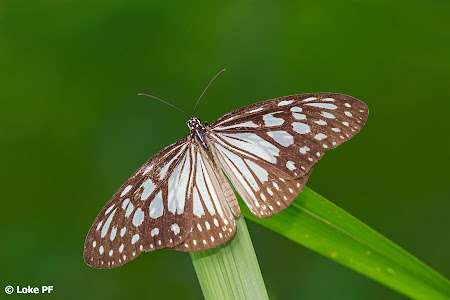 In Oct 2014, another species of the genus Ideopsis, the Grey Glassy Tiger (Ideopsis juventa sitah) was observed at Pulau Ubin, and then subsequently in the same year, at the Singapore Botanic Gardens. This species is not uncommon up north in Johor, and has been seen in numbers at the Desaru area on the eastern coastal areas of Johor. 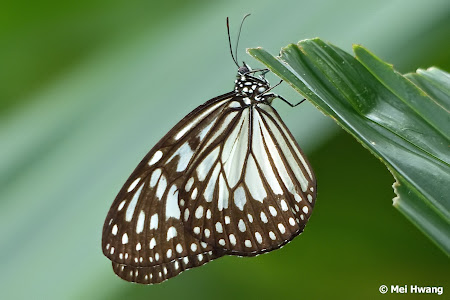 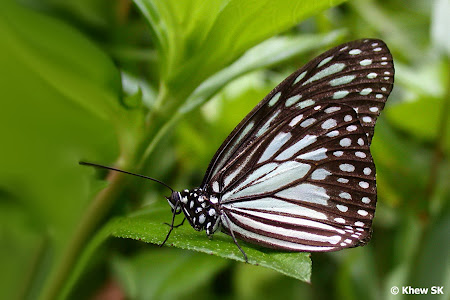 It is possible that an outbreak of the species has sparked off some strays into Singapore. It has not been reliably seen in recent years after the sightings in 2014, but added to the Singapore Butterfly Checklist as a vagrant species appearing in Singapore. 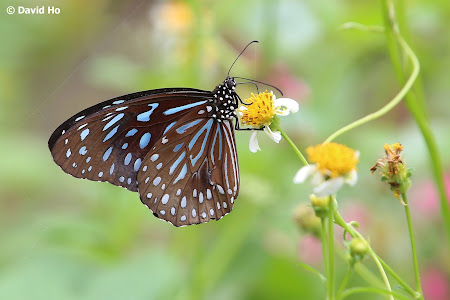 In 2016, a free-ranging Dark Blue Tiger (Tirumala septentrionis septentrionis) was photographed in the field. The Dark Blue Tiger has been sighted previously but no photographic evidence of a Singapore field-shot individual was recorded so far. Also, at that time, the butterfly aviaries in Sentosa, Hort Park (now closed) and Changi Airport also imported this species from Malaysia and there may have been escapees. 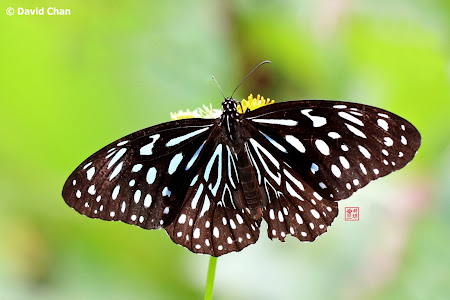 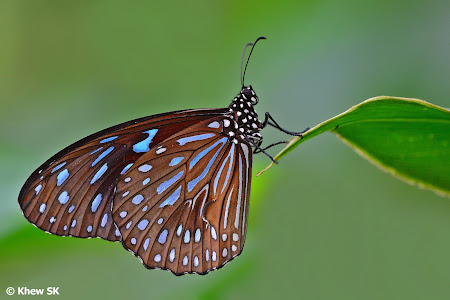 In Jan 2019, another wild shot individual was posted from Pasir Ris Park. Although still considered a vagrant species, the Dark Blue Tiger was added to the Singapore Checklist and 'adopted' as one more flying tiger in Singapore. 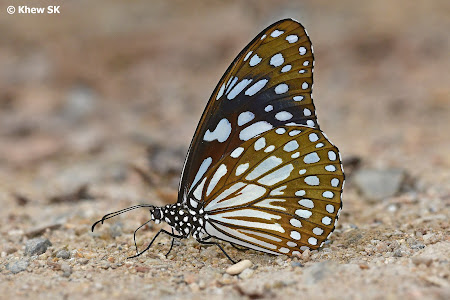 Also in 2016, a single individual of the Blue Tiger (Tirumala limniace) was spotted at a suburban garden feeding on Crotalaria retusa. The Rattlebox Weed is a favourite plant of the Danainaes where they feed on the sap of the stem and seedpod of the plant. A rare species even in Malaysia, it was therefore a surprise that a pristine vagrant appeared in Singapore. 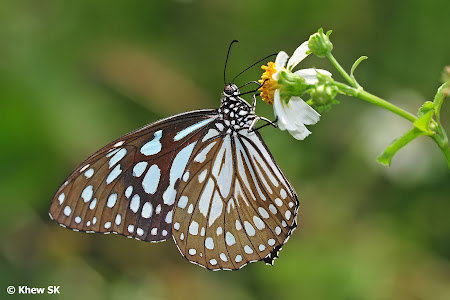 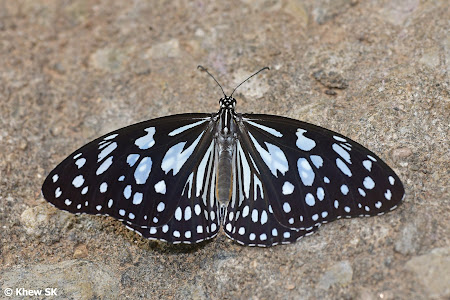 Perhaps, as the author suggested, the Blue Tiger shot 5 years ago was a stowaway on a plant that was imported to Singapore as a pupa, and then eclosed here. Other than this individual, so far no other sighting of the Blue Tiger has been made in Singapore since. 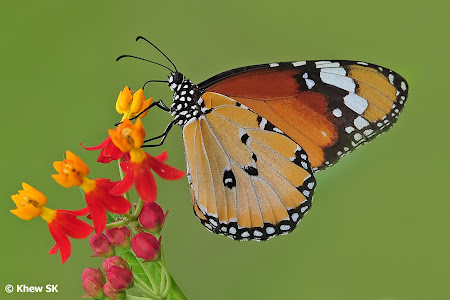 This is the latest inventory of "Tigers" in Singapore, with a total of eight sighted and recorded over the years.  Let us hope that there will be other Tigers that will make their way to Singapore in the coming years.
Text and Photos by David Chan, David Ho, Mei Hwang, Khew SK and Loke PF

Hello Khew SK. I am reviving my blogspot here and deleting the inactives from the bloglist. Then i saw this wonderful post of the tigers. As usual i love the pictures, of course. I have many tigers here in my garden, but haven't seen any of the orange-colored ones. A lot of daily residents are the 3 species of Tirumala, Ideopsis and the White Tiger - Danaus melanippus edmondii. The host plant i kept since dry season is now growing profusely and adding a lot more of the Tirumala. And the Purple Crow are always with them, maybe they have common host plants.