One of the definitions of the word Posy is a bouquet. Indeed, the three species of Posy found here in Singapore resemble colourful flowers with attractive black markings. Each species is endowed with three pairs of tails on the hindwings with the tail at vein 2 being the longest of the three.
The Posies belong to the genus Drupadia, of which three species are known to exist in Singapore. All three are forest species and are usually encountered in the nature reserves in the shaded understorey. At times they are found sunbathing with wings opened flat, displaying their blue or purple uppersides. They have a habit of fluttering with a skipping flight, and in some individuals, returning to the same favourite perch time and again. Males generally have a stronger flight than females. 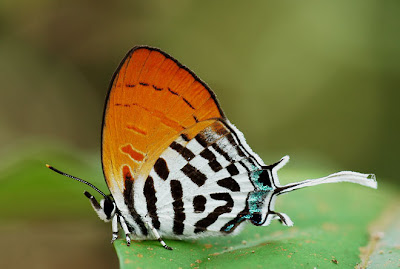 The most frequently encountered species is the Common Posy (Drupadia ravindra moorei). In the male, the forewing is dark brown and the hindwing a very attractive azure blue. The female is mainly brown, with a faint orange discal patch in some individuals. The underside is orange on the forewing with orange and black markings, and mainly white on the hindwing, with black solid bands and spots. Along the tornal edge are iridescent blue scales and the black-centred white tails emerge from veins 1b, 2 and 3, with the tail at vein 2 being the longest. 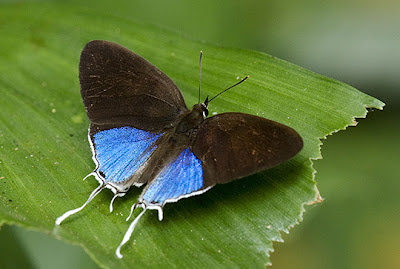 Upperside of a male Common Posy 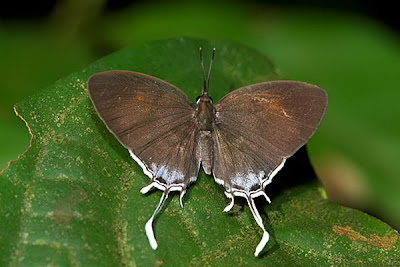 Upperside of a female Common Posy 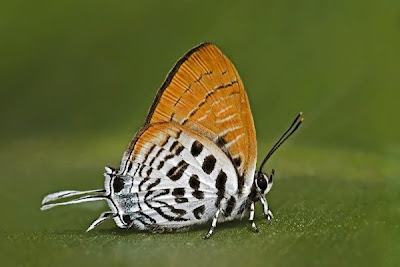 The next species, the Dark Posy (Drupadia theda thesmia) is less often seen but occasionally several are seen together, frolicking at tree-top level in the late hours of the afternoon basking on the tops of leaves when the sun shines through the forest canopy. The male is dark purple above with an orange discal patch on the forewing. This form, f-minara is the typical male form found in Singapore. The female is brown with a bluish grey tornal patch on the hindwing which has a few black submarginal spots. 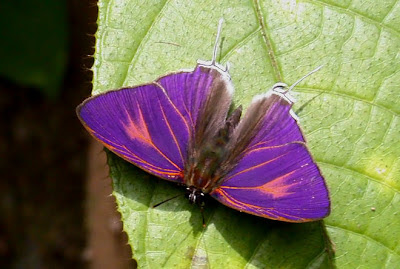 Upperside of a male Dark Posy 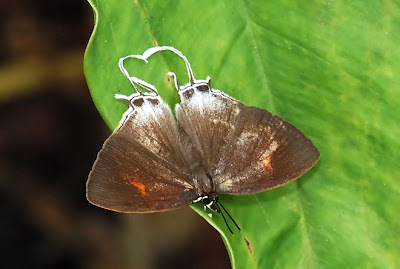 Upperside of a female Dark Posy

On the underside, the forewing is dark orange marked with darker transverse stripes, whilst the hindwing is white with black spots and lines. This species can be separated from the lookalike Common Posy in that the space between the two black stripes forming the cell-end bar on the hindwing beneath is white, and not solid black as in the Common Posy. 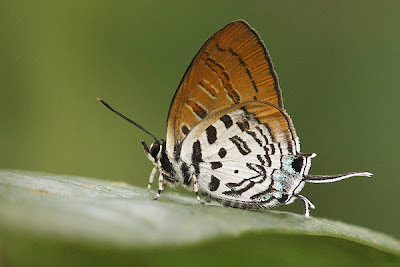 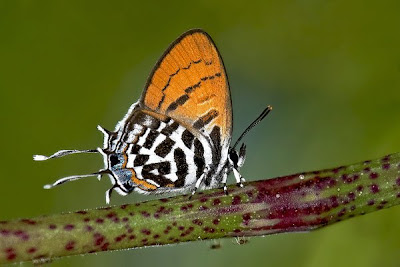 The final and rarest of the three Posy species in Singapore is the Pygmy Posy (Drupadia rufotaenia rufotaenia). This species, which suggest a small female of the Common Posy, which it resembles. The Pygmy Posy has a wingspan of 20mm, which is about half the size of its other two cousins. In Singapore, it is often seen feeding on the sugary sap of the young shoots of the forest bush, Leea indica, where it stays still for long periods of time unless disturbed. 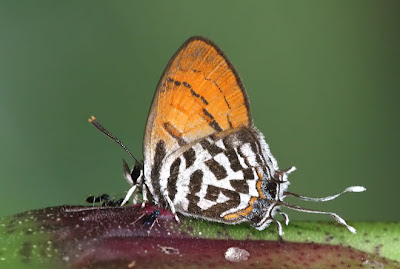 It can be reliably separated from the other two Posies in that the narrow submarginal orange band on the hindwing beneath is continuous from 1a and extends to vein 3.
Text by Khew SK ; Photos by Khew SK, Sunny Chir, Horace Tan, Federick Ho.
Posted by Commander at 9:46 PM 0 comments