An Audience with the King


Some time in early June this year, four ButterflyCircle members made the journey up north to Ipoh for a butterfly shooting trip.  We figured out that it would be interesting to try the journey by coach up to Ipoh, and then let Loke borrow his dad's car to explore a few areas around the Ipoh vicinity.
﻿﻿﻿﻿
﻿﻿﻿﻿


Besides making a trip on the first day, to Gua Tempurung in Gopeng, where the BC quartet managed to shoot quite a number of different species, including some rare Hesperiidae and Lycaenidae, our mission was accomplished when most of us managed to shoot the Dragontails and the Banded Peacock - two species frequently seen in that area. 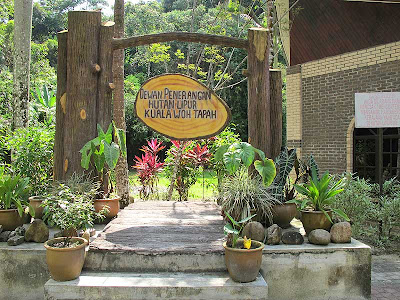 But the subject of this blog article is our second day's trip to the Kuala Woh Recreational Forest Park.  Having been there many decades back as a school kid with my mentor, I had fond memories of Kuala Woh, where I had collected many species that I had not encountered before.  But amongst my most memorable encounters was with the black and emerald Rajah Brooke's Birdwing (Trogonoptera brookiana albescens).

Situated about 13 km from Tapah Town, the Kuala Woh Recreational Forest today has many user-friendly facilities for picnickers and nature lovers.  As it was a long weekend in Malaysia, with a public holiday, many locals were out in numbers, swimming in the river, enjoying a day out their their family members and having a fun day out at the recreational forest.

When the four of us arrived at Kuala Woh, the car park was already quite packed, and there were many families out to enjoy themselves on this warm humid day.  After a quick recce, we headed for the banks of the river.  We were pleased to see a number of the Rajah Brooke's Birdwings puddling at the sandy banks just beside the river.

The butterflies were mesmerising with their black and green wings, fluttering elegantly in their regal splendour and gliding around looking for the choiciest spots to puddle.  Those that were already on the sand were happily puddling away, often so engrossed in their activity of drinking the salts from the most sand, that one could even hold them between one's fingers! 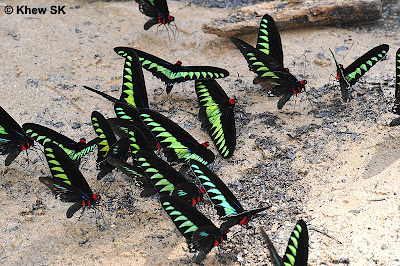 Our group unpacked our equipment and started to select the best specimens to photograph.  It was challenging when there were so many of these magnificent birdwings fluttering around.  Interestingly, the green scales on the Rajah Brooke's Birdwings' wings took on slightly different hues of greens and blues (and even appeared yellow) when viewed at different angles, or whether the flash from the camera is on or off. 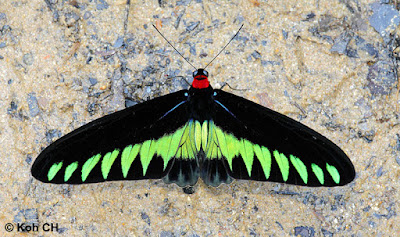 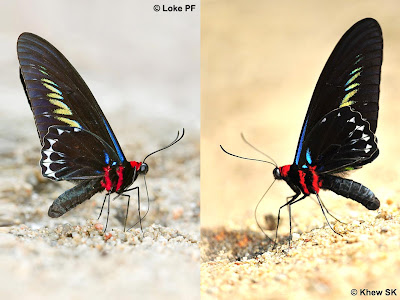 The congregation of Rajah Brooke's Birdwings (all males) continued to puddle, oblivious to the increasing crowd of people swimming in the river, and walking around them.  Each time they were disturbed, they took off, flew around and then quickly returned and settled down to drink from the damp sandy banks, with their long black probosces extended. 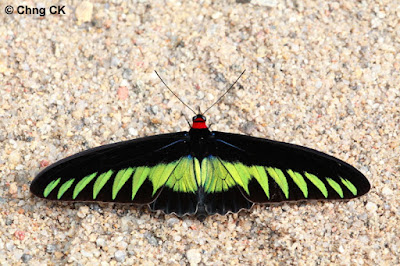 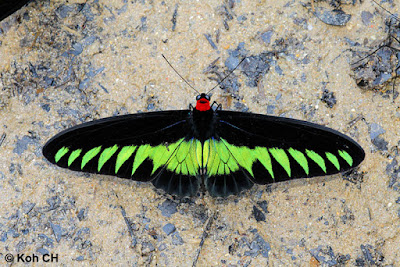 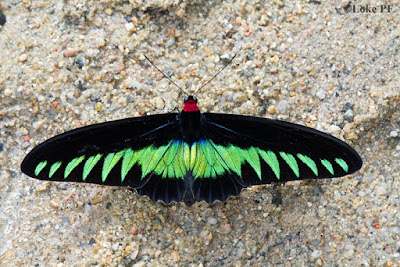 After having our fill of many shots of the Rajah Brooke's Birdwings, we took the opportunity to explore around the Kuala Woh Recreational Park. By then it was getting a bit cloudy. But along the forest trails we still managed to observe quite a few species of butterflies, including a male Rajah Brooke's Birdwing that was resting in the shade, no doubt after having his fill of nutrients from the puddling. 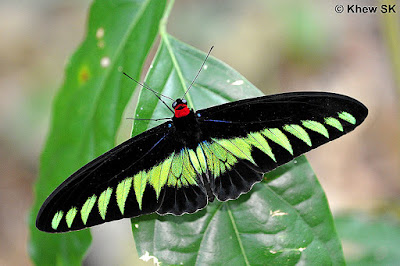 Our objective of seeking an audience with the "King of Butterflies" the Malaysian Rajah Brooke's Birding, was granted!  The four of us left, happy and satisfied at having encountered so many of these beautiful and magnificent butterflies that made the trip to Kuala Woh well worth it.


The following day, we took the coach and headed back to Singapore, each of us wondering when we would return to see the "King" again in the future. 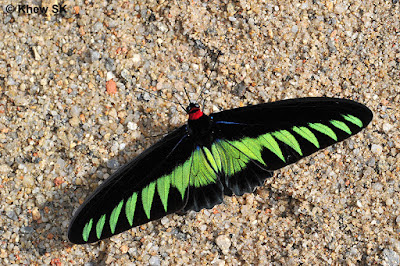 Text by Khew SK : Photos by Chng CK, Khew SK, Koh CH and Loke PF
Special thanks for Loke PF for organising this trip and showing our group around his hometown of Ipon, Malaysia
Posted by Commander at 7:40 PM 2 comments