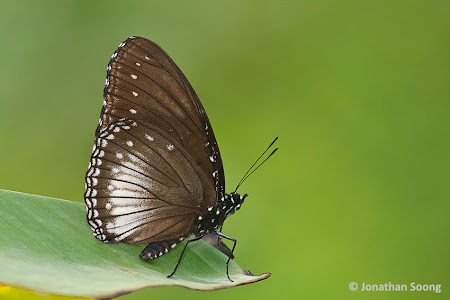 
Pictured here is a form-nivas Malayan Eggfly, featuring the white patch on the hindwing that the form-anomala does not have. The white markings on the hindwing can be variable, from a few obscure white stripes to a large distinct patch. This individual was photographed last weekend at the Dairy Farm Nature Park by young ButterflyCircle member, Jonathan Soong.

Posted by Commander at 9:58 AM 0 comments