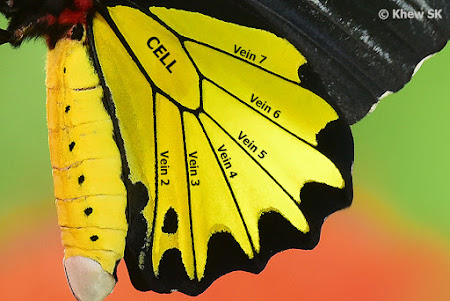 
In the next article of our series on butterfly anatomy and scientific terminology, we take a closer look at the wings of the butterfly. The wings constitute one of the important parts of a butterfly in classification and identification work. The ability to understand the terms that are used to reference various parts of a butterfly's wings is critical to butterfly identification. This article focuses on the veins on the butterfly's wings and how they are named. 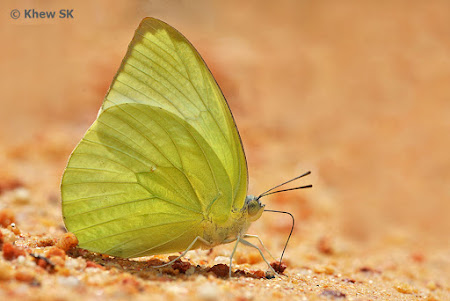 
The wings of a butterfly are membranous with veins running longitudinally from the base (where the wings are attached to the thorax) to the outer margins of the wings. The pattern and arrangement of these veins (wing venation) is an important diagnostic tool in the identification of butterflies. It is therefore important to understand the wing venation as a reference to locating features that are associated with the veins/spaces on a butterfly's wings. In some cases, the arrangements of the veins themselves will give important clues to the genus of the butterflies. 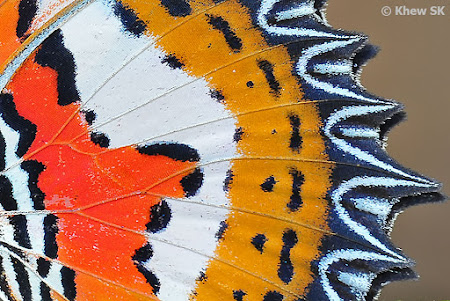 
The veins of a butterfly's wings gives the structural strength to the soft membranous wings onto which the scales are attached. These veins are tubular, in which a liquid 'blood', or haemolymph circulates within them. 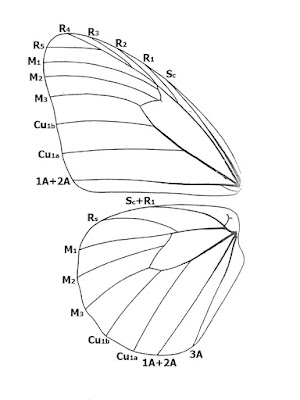 The Comstock system of butterfly wing vein notation.  Whilst the system has a strong scientific basis, the numbering system requires a bit of understanding and is not easy for a hobbyist enthusiast to understand.  It is probably for this reason that, for butterflies, it is easier to understand the more intuitive Numerical Notation system.


A butterfly's wing venation has been used extensively in the classification and identification of butterflies and the nomenclature of the veins in insects usually follows the system adopted by JH Comstock (referred to as the Comstock, 1918 system). However, a simplified and more intuitive Numerical Notation system pioneered by Herrich-Schaffer is more commonly used. Basically, this system numbers the veins from 1, which represents the anal veins (1a and 1b) through to number 12 on the forewing, and 1a and 1b to 8 on the hindwing. Note however, that not all butterflies have the full set of veins on both wings, and may vary from species to species. 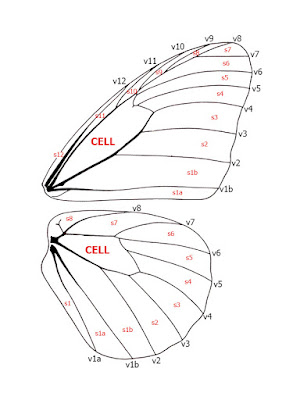 A typical wing venation of a butterfly based on the Numerical Notation system. Note the naming of the spaces between the veins 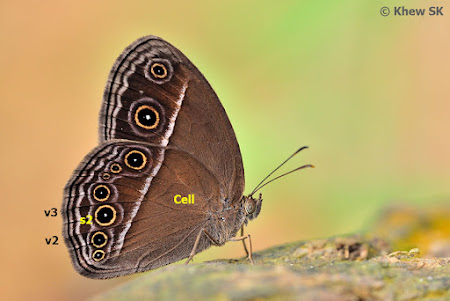 In the identification of a Dingy Line Blue, the reference to the ocellus in space 2 being a diagnostic feature is clearer when one is able to find "space 2" on the hindwing by understanding the numerical naming of the wing venation and spaces between the veins.

This is an important convention to understand, as for example, the description of "the ocellus in space 2 of the hindwing is moved inwards" immediately directs the observer to that particular part of the wing to observe this diagnostic feature that distinguishes the Dingy Bush Brown (Mycalesis perseus cepheus) from its other lookalike cousins. 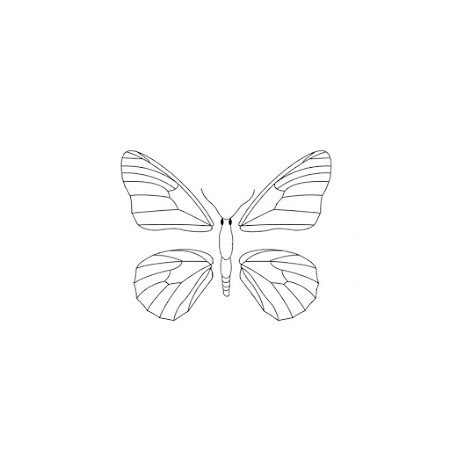 In the examples below, we illustrate how wing venation is used to refer to certain features of a butterfly. We will compare a few photographs of actual butterflies with the numerical system of naming the veins and how these wing veins appear in the actual individuals. 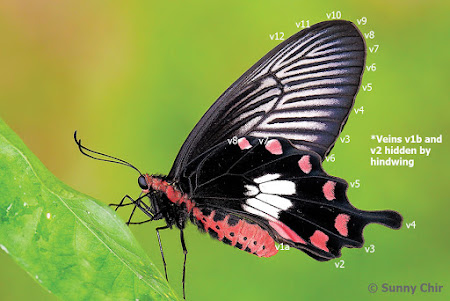 The Common Rose (Pachliopta aristolochiae asteris) - Species of the family Papilionidae tend to have the full complement of veins from 1a to 12 on the forewing and 1a to 8 on the hindwing (with vein 1b missing). 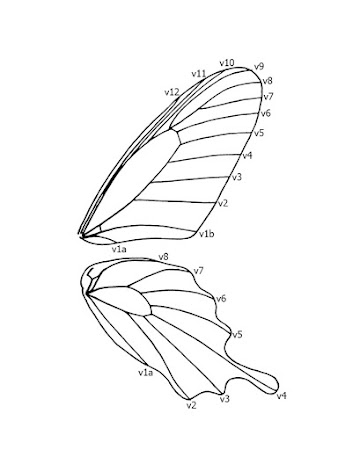 For example, when a description of the Common Rose states "there is a spatulate (spoon-shaped) tail at vein 4 of the hindwing", it is now easy to look at the veins and understand where the location of the tail at vein 4 is. 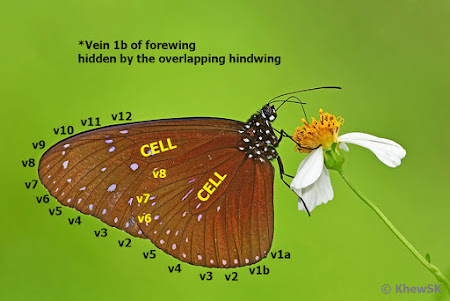 The Striped Blue Crow (Euploea mulciber mulciber) - The Danainae feature species that have almost the complete complement of wing veins on both wings, with the exception of vein 1a on the forewing. In the case of this male Striped Blue Crow, the veins are clearly seen on the brownish base colour of the wings. 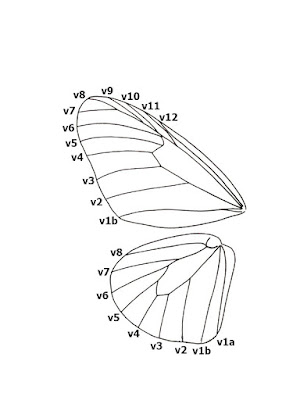 Take a close look at the hindwing veins on the butterfly. Can you trace all the veins from vein 2 to vein 7 to the cell on the wing? On the hindwing in all butterflies, veins 2 to 7 always originate from the cell. 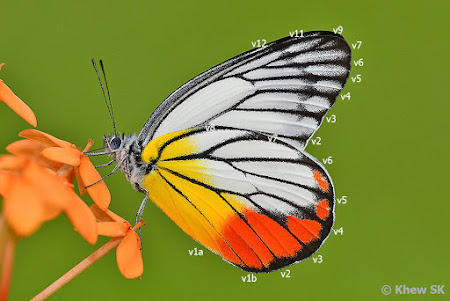 The darkened veins of the Painted Jezebel are helpful in locating and understanding the position of the veins on the wings.


The Painted Jezebel (Delias hyparete metarete) - Many species of the Pieridae feature the full complement of veins from 1a to 8 on the hindwing. However, several veins are missing from the forewing, where veins 1a, 8 and 10 are not present. 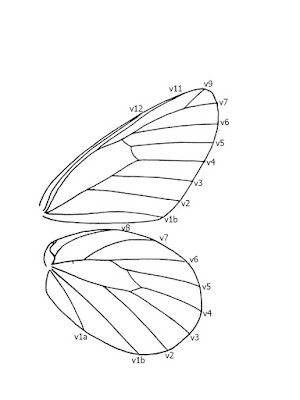 The Painted Jezebel, like several species in the Pieridae family, is also interesting in that the veins on the wings are darkened and it is quite easy to trace most of the veins in the butterfly when looking at its wings. 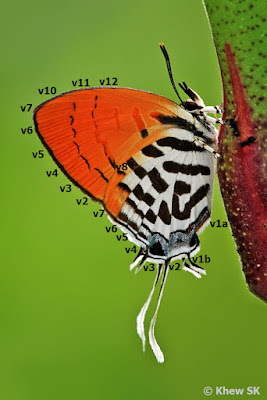 The Common Posy (Drupadia ravindra moorei) - A example of a Lycaenidae and the wing veins in this species. Many species in the Lycaenidae family have veins 8 and 9 are missing from the forewing. 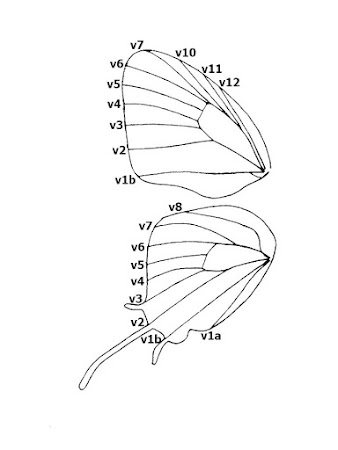 Looking at the hindwing veins, a description such as "the hindwing has three white tails at veins 1b, 2 and 3, of which the longest is the one at vein 2" becomes easier to understand.

In the next article, we will discuss the names of the different parts and zones on the wings of a butterfly and how we can use these references together with the wing venation and external margin names of the wings to find the diagnostic features in the identification of butterflies.