Butterfly of the Month - September 2022 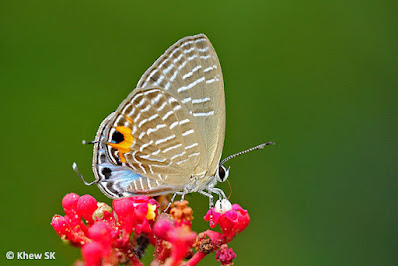 A Metallic Caerulean feeding on the flower of the Red Tree Bush.  Note its raised hindwing showing the bright metallic blue upperside
The ninth month of 2022 whizzes past and very soon we will be in the final quarter of the year. Over in the United Kingdom, the longest serving monarch, Queen Elizabeth II, passes away. For as long as us baby boomers can remember, England always had a queen and the image of her appeared from commemorative stamps to the British currency notes and coins. Crowned the Queen in 1952, she ruled the United Kingdom until her death in 2022, setting a historical record as the UK's longest serving monarch. 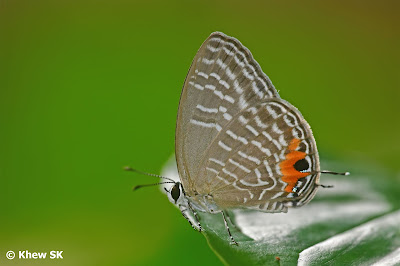 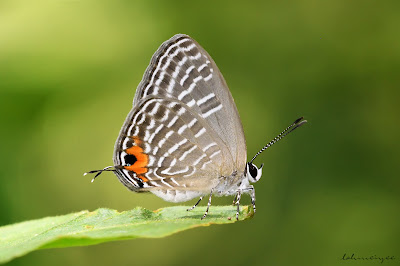 The world waits with bated breath as China prepares itself for its 20th National Congress next month. China’s ruling Communist Party will hold its five-yearly congress beginning on October 16, with President Xi Jinping poised to secure a historic third leadership term and cement his place as the country’s most powerful leader since Mao Zedong. 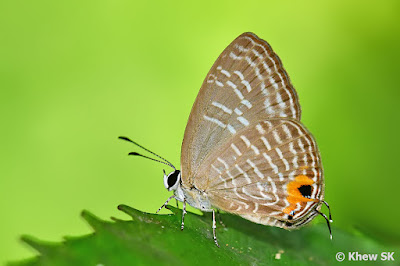 With an economy battered by its unique zero-Covid policy characterised by lockdowns and quarantines, will China start accepting the virus as endemic and deal with it like most countries around the world are already doing? Or will it continue to exercise its own brand of managing Covid19 and continue on its track of controlling the spread by isolating entire cities? It is expected that the directives set at the National Congress will shed some light on the way forward. 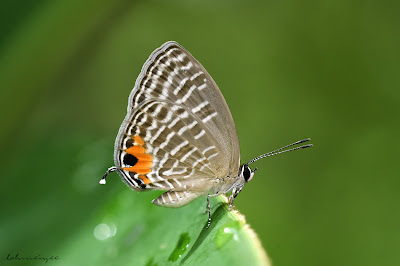 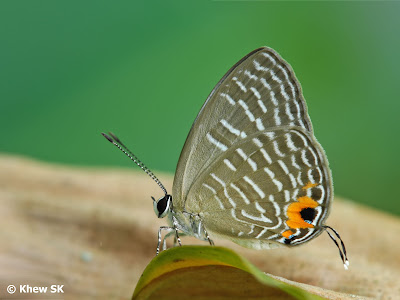 Over to our closest neighbour Malaysia in the north, the prediction that former Prime Minister Najib Razak will be released from jail in September did not quite materialise. He has remained in jail after being sentenced to 12 years imprisonment and fined RM210M by the apex court in Malaysia. Behind bars but not forgotten, will the former Prime Minister and son of the 2nd Prime Minister of Malaysia, Tun Abdul Razak, be back in politics again one day soon? In Malaysia, anything is possible. 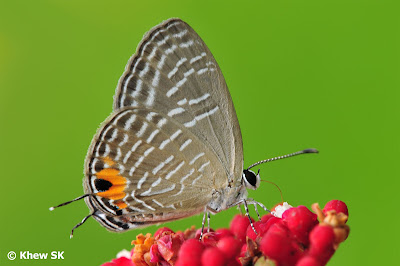 Leaving the current affairs of the human world behind, let us turn to our Butterfly of the Month for September 2022, the Metallic Caerulean (Jamides alecto ageladas). Re-discovered in 2008 at the now-demolished Mandai Orchid Garden, the species is relatively widespread and is probably the 2nd most common species in the genus after the Common Caerulean (Jamides celeno aelianus). 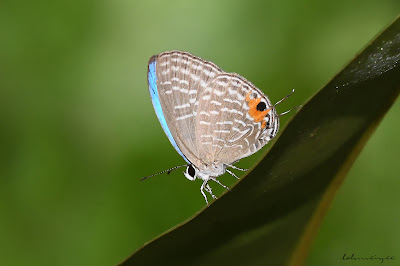 A Metallic Caerulean showing a glimpse of its metallic blue upperside 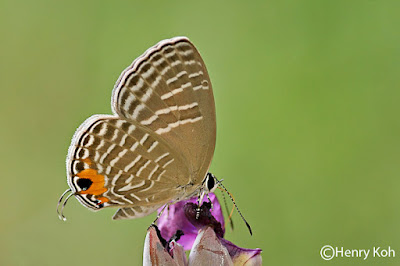 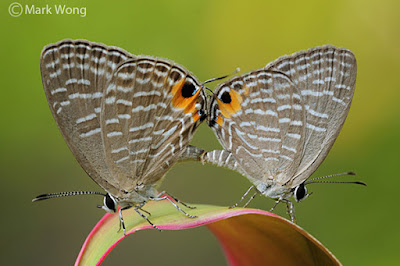 A mating pair of Metallic Caeruleans
The Metallic Caerulean is described as the largest species in the elpis subgroup, which is characterized by the post-discal band on the underside of the forewing being completely dislocated at vein 3. The male of the species has a black diffuse border on the forewing, expanding to about 1mm at the apex and a series of black marginal spots on the hindwing. The female has the forewing border extending narrowly along the costa to the base. 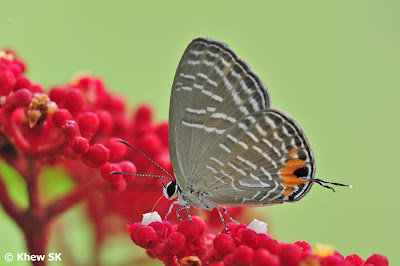 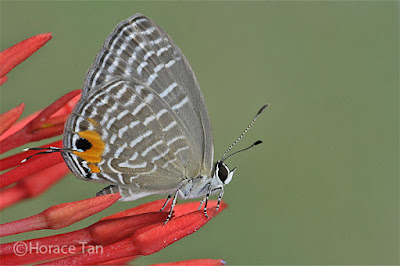 The Metallic Caerulean has bright metallic blue uppersides, and grey ground colour on the undersides with the usual white banding. On the hindwing, there is a black-centred orange-crowned eyespot at the tornal area, with some additional submarginal orange markings along veins 1b and 4. There is a white-tipped filamentous tail at vein 2 of the hindwing. 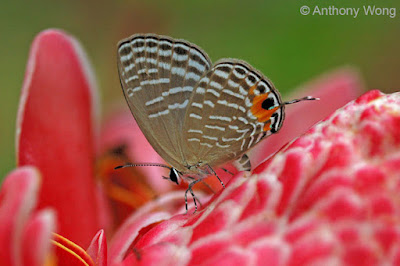 A Metallic Caerulean ovipositing on the flower of its caterpillar host plant, Torch Ginger 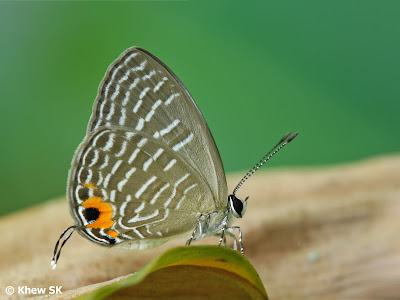 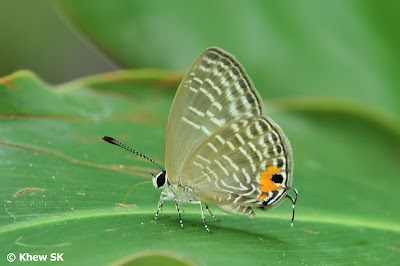 The species is an erratic and active flyer, often flying restlessly on bright sunny days and frolicking amongst the shrubbery. It is often found in the vicinity of the Torch Ginger plants and the flowers, on which the caterpillars of the Metallic Caerulean feed. At certain times of the day, it will perch with its wings folded upright, on the uppersides of leaves to rest in the shaded understorey. 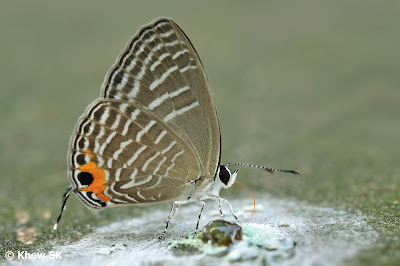 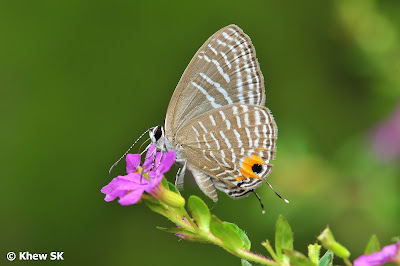 A Metallic Caerulean feeding on the flower of the False Heather (Cuphea hyssopifolia)
Both sexes are regularly seen feeding on a variety of flowering plants, like the Red Tree Bush, Bandicoot Berry, False Heather and others. Males have been observed puddling on bird droppings and other decomposing organic material. The species has been successfully bred in Singapore on the Torch Ginger and Yellow Saraca.
Text by Khew SK : Photos by Khew SK, Henry Koh, Loh MY, Horace Tan, Anthony Wong and Mark Wong
Posted by Commander at 2:53 PM