Butterfly Bubbles
Formation of bubble droplets when a Butterfly "pees" 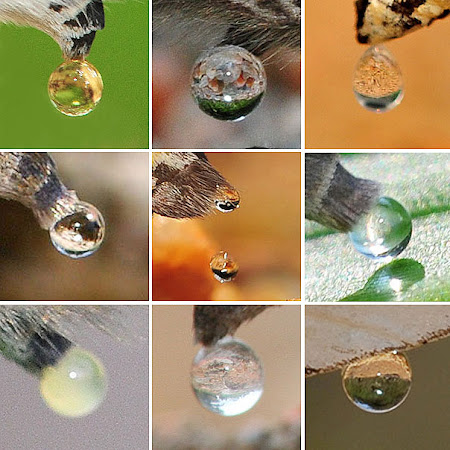 When I was thinking of a title for this blog article, I had originally thought of a more catchy "Bubble Butts" or something to that effect.  However, a quick Google uncovered a series of rather uncomplimentary definitions that this particular pair of words alluded to, so I had to decide on a more decent title, lest this blog be subject to a more stringent censorship scrutiny! 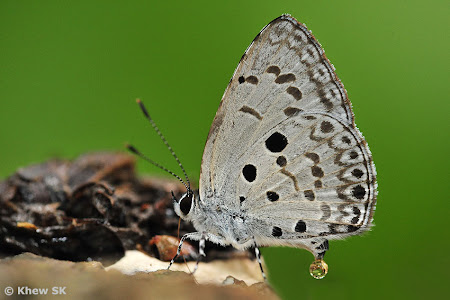 Over the years of photographing butterflies, particularly those that were puddling, ButterflyCircle members have come across the puddlers forcefully excreting liquid from the business-ends of their abdomens. When puddling, it is quite obvious that butterflies take in copious amounts of mineral-enriched fluids that they require for various biological functions. 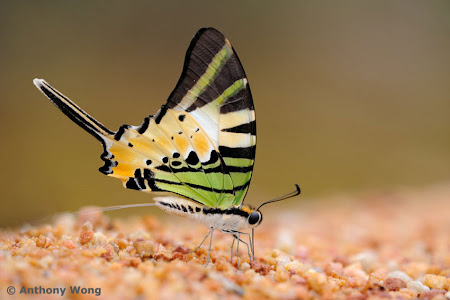 Jet-propelled FiveBar Swordtail!  The butterfly ejects a stream of fluids whilst puddling

The biological processing of these fluids within the bodies of the butterflies to extract the requisite minerals must be extremely efficient. Once the minerals are absorbed, the remaining fluids are ejected from the butterfly's body, so that there is no superfluous build-up of the excess fluids that the butterfly does not need. 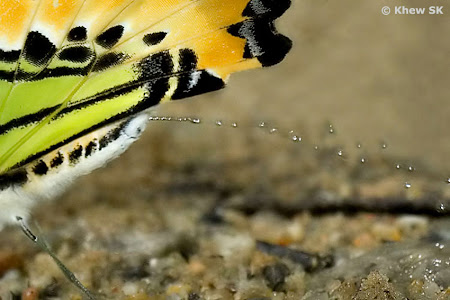 
However, it has been observed that in many cases, the excretion of the waste fluids is much slower, as the butterfly passes the fluids slowly, creating a droplet of fluid that remains attached to the tip of the abdomen of the butterfly. Given the viscosity of the liquid that the butterfly excretes, and the low speed at which the liquid forms, a droplet is formed. 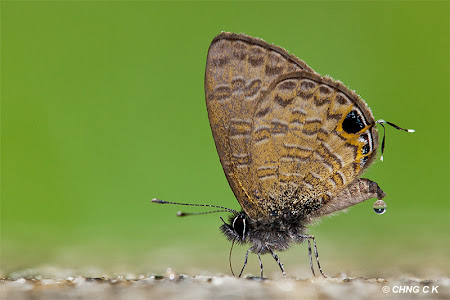 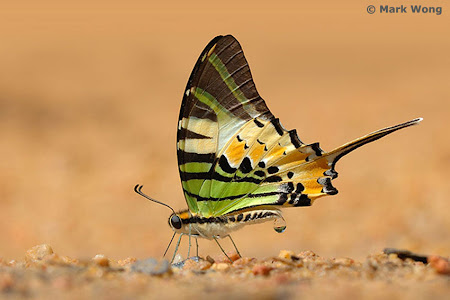 Before we delve into the physics of the formation of drops of liquid, let us first recall the reasons why butterflies puddle.  In an earlier blog article, puddling was discussed. Adults of many butterflies, principally males, frequent mud puddles, stream banks that have been contaminated with animal excretions, carrions and bird droppings where their imbibe sodium, chlorides and nitrates that are essential to their biological functions. A study showed that virgin females have reduced longevity. This is attributed to virgins not obtaining important nutrients which the males transfer to females during mating. 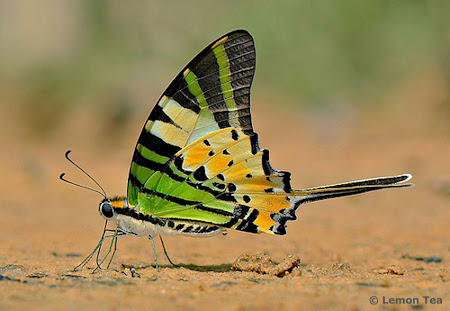 When settled down to puddle, some butterflies can remain still for long periods of time, often to their own detriment, as they become vulnerable to nearby predators. At times, their preoccupation with puddling can prove fatal. We have observed, for example along forest road in Malaysia, where puddling butterflies are so engrossed in puddling, that they even forget to fly out of the way of an oncoming vehicle's tyres! 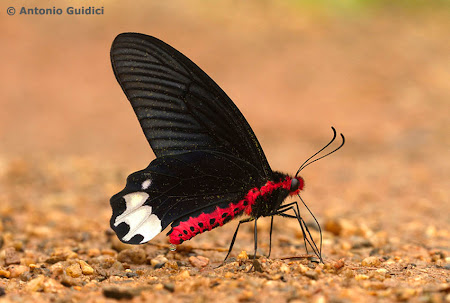 
Butterflies from the families Papilionidae, Pieridae, Lycaenidae, Hesperiidae, and to a lesser extent, Nymphalidae, engage in puddling activities. In many instances, the process of excreting the excess fluids from the abdomen has been photographed. Besides the jets of fluid excreted, we have often observed the formation of small bubbles of fluid oozing out from the tip of the abdomens of butterflies. 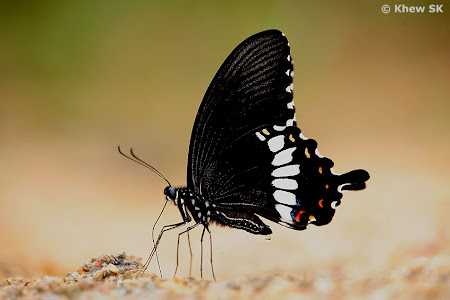 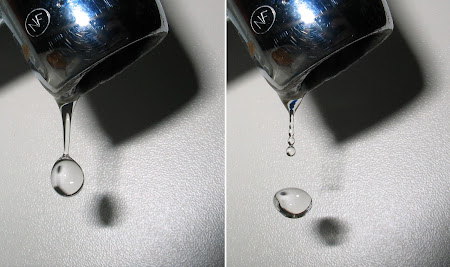 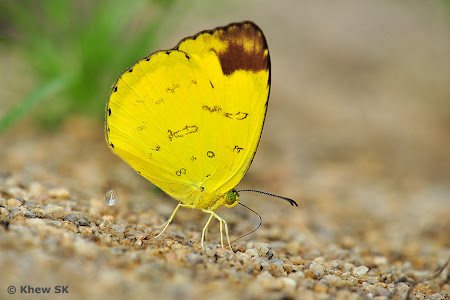 Top : A drop of water falls off after exceeding a certain size when gravity exceeds surface tension forces. (© Wikipedia) Bottom : An Eurema simulatrix excretes a drop of fluid from its abdomen 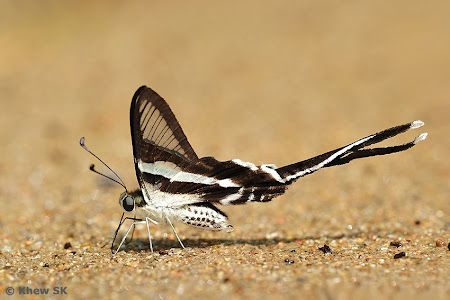 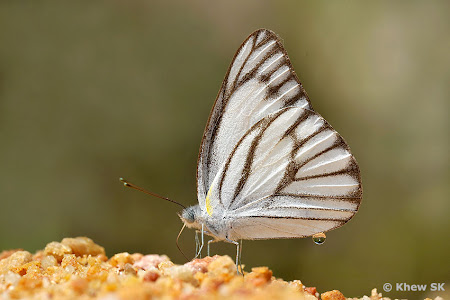 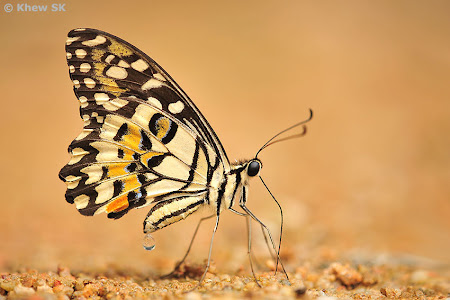 The drop of fluid can vary in clarity from crystal clear and totally transparent, to a muddy and cloudy constituency. This is probably dependent on the fluids that the butterfly is feeding on, or the process of digestion that the fluids go through in the alimentary canal of the butterfly. 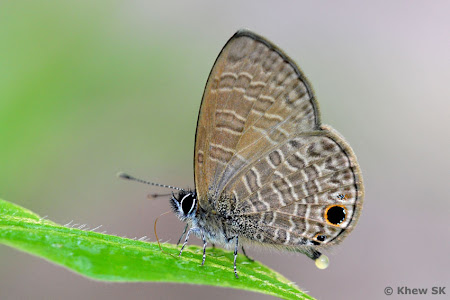 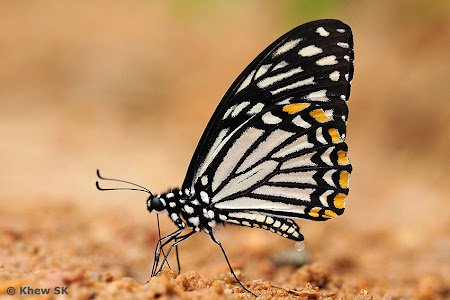 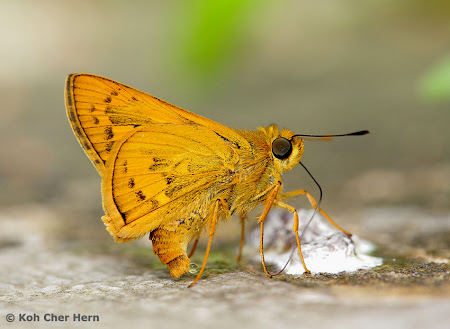 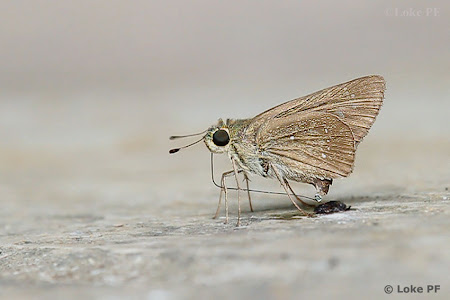 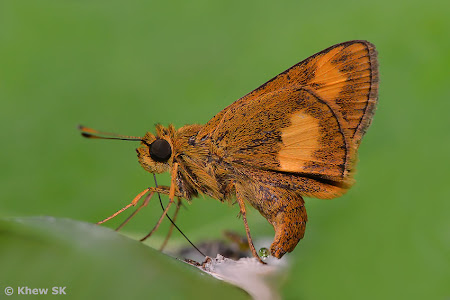 
Amongst the puddlers, butterfly species from the families Papilionidae, Pieridae, Lycaenidae and Hesperiidae tend to display the "bubble drop" phenomenon as they puddle. Of those Nymphalidae that do puddle, we have rarely come across any of the species retaining a bubble at its abdomen. Could it be perhaps that they imbibe smaller amounts of fluid as they puddle? Or maybe they have a slower metabolic process that retains in their bodies, most of the fluids that they imbibe? 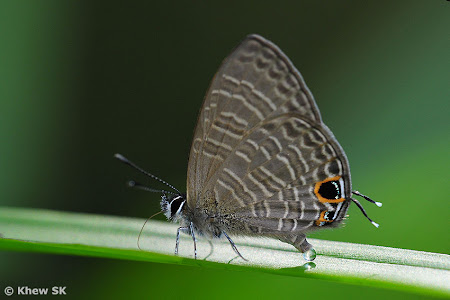 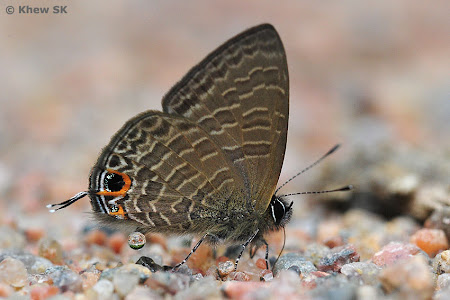 In the meantime, keep observing and recording any interesting notes that could yield a better understanding of this simple phenomenon and how each different species of butterfly displays different behaviour. Click on the individual photos for a larger view of these bubbles on the butterflies.
Text by Khew SK : Photos by Chng CK, Antonio Giudici, Khew SK, Koh CH, Loke PF, Lemon Tea, Anthony Wong & Mark Wong