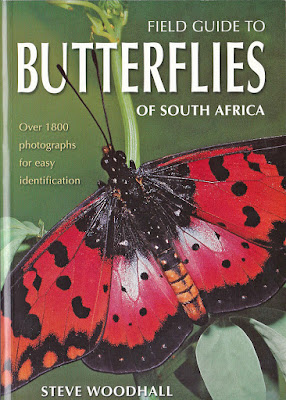 A friend who recently visited South Africa managed to get me a copy of the Field Guide to Butterflies of South Africa by Steve Woodhall. A prolific author of several books on butterflies, Steve has effectively introduced the amazing diversity of South African butterflies through his excellent books and on social media to those of us in "faraway" lands who can only drool at the beauty of the butterflies in Steve's backyard. 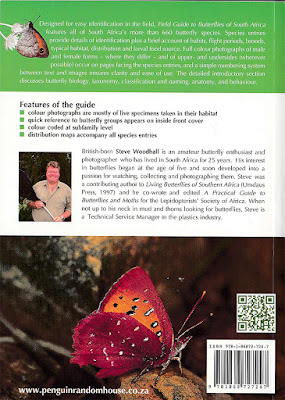 The Field Guide to the Butterflies of South Africa was first published in May 2005. It was back then, the definitive book for butterfly enthusiasts and sold over 20,000 copies around the world! Steve went on to published several other books on butterflies in 2008, 2013 and 2016 and even has an app for iphones. He is currently working on the 2nd edition of his Field Guide and it is expected to be launched some time in 2020. 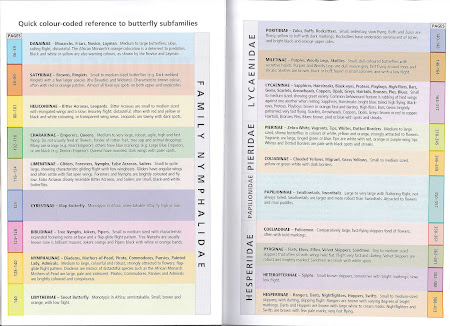 A nice "index" at the start of the book that shows all the families/sub-families of the butterflies featured in the species accounts section.


Butterflies of South Africa is a 440-page softcover book in a handy standard A5 sized format. The majority of the 1,800 photos in the book are by Steve and the remaining photos are by a group of his associates. The photos are mainly of field shots of the 660 species in South Africa, with some pinned specimen shots where field shots are not available. 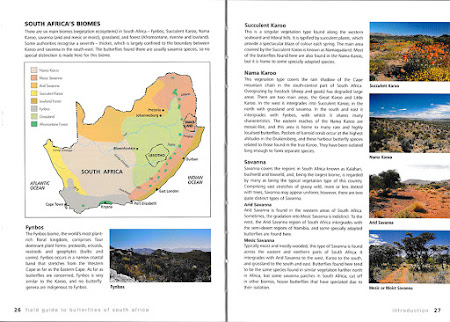 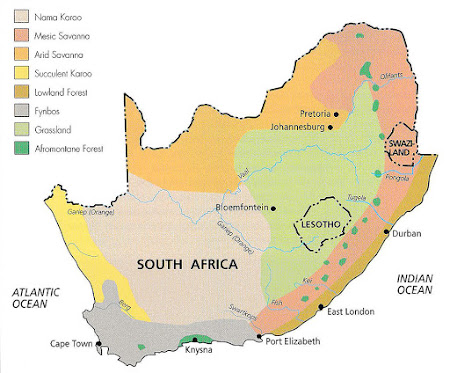 Biogeography, vegetation ecosystems and habitats where the butterflies are found in South Africa


The book starts with the necessary introduction to butterflies - their taxonomic classification, biology, life history. anatomy, life history and so on. As the land area of South Africa is relatively large, the author elaborated on the different biomes (vegetation ecosystems) found in South Africa. 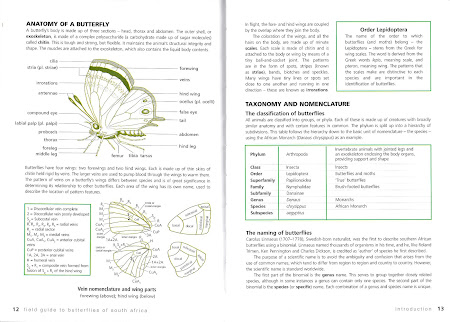 
The largest section in the book, as can be expected, is the species accounts. The author organised the book by families, starting with the group with the largest number of sub-families - the Nymphalidae. It is then followed by Lycaenidae, Pieridae, Papilionidae and Hesperiidae. It is interesting to note that the 6th family in the butterfly world, Riodinidae (Metalmarks) is missing from South Africa. 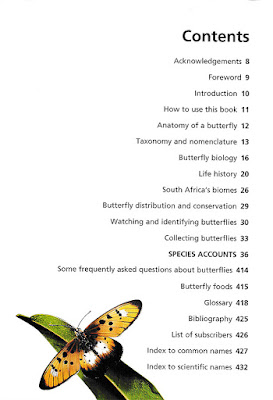 This blogpost features some of sample pages of the species accounts. Each pair of pages are organised such that the write-ups are on the left, and the photos of species described are on the right. This is a convenient format for readers, as the pictures correlate directly to the write-ups without having to flip and cross-reference to a set of plates located elsewhere in the book, or even having to turn to a next page to view a photo of a butterfly that was described in a preceding page. 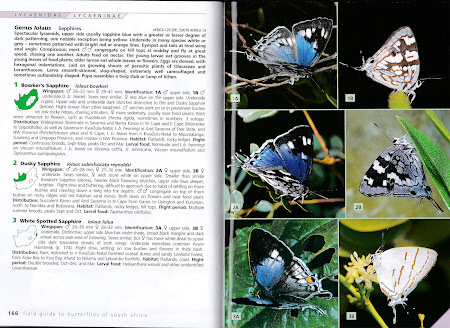 The descriptions of the species and other useful information are formatted on the left page, with the corresponding photos of the species on the right.  Photos are labeled for easy reference and there is no need to flip pages to refer to photos in appendices or plates in other parts of the book.


Each photo is labeled 1A, 1B, 2A and so on, to correlate to the write ups, showing upperside, underside, male or female of a species as the case may be. Where field shots are unavailable, these are supplemented with photos of pinned specimens. As field butterfly photography goes, it is not always possible that one can get good photos of all the uppersides and undersides of every species. Hence the most practical way of allowing readers to have a view of the uppersides (or undersides) of some species, a shot of a pinned specimen may be the best compromise. 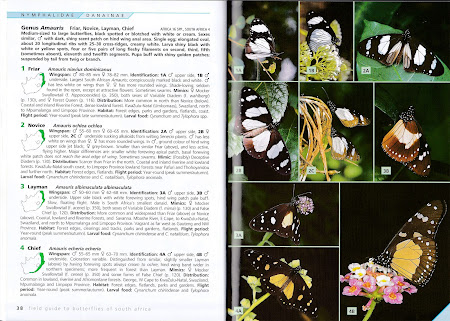 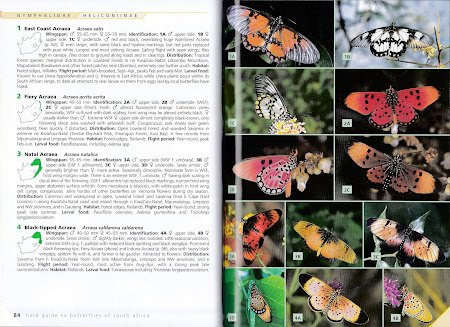 
The subfamily Heliconiinae is of interest, particularly from the genus Acraea. In Singapore, the Tawny Coster (Acraea terpsicore) was added as a new species in 2006. It is the sole representative of the genus found here. However, in South Africa, there are 21 Acraea species! The diversity in colours and patterns of this genus is quite amazing. But the similarities with A. terpsicore in wing shapes and general appearance are obvious. 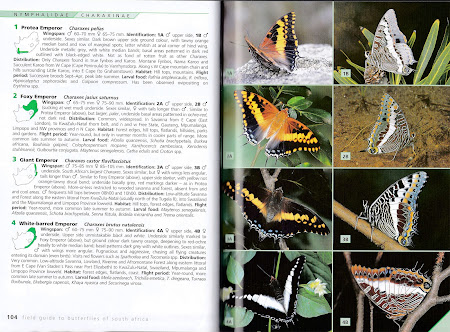 
The subfamily Charaxinae features some of the most spectacular butterflies in the world.  Their intricate patterns and colours are often a sight to behold.  Often referred to as the Rajahs in Asia, the genus Charaxes usually features robust-bodied species with twin tails.  Over in South Africa, there are 23 species (of which two species have single tails).  Definitely a country to keep Charaxes enthusiasts busy! 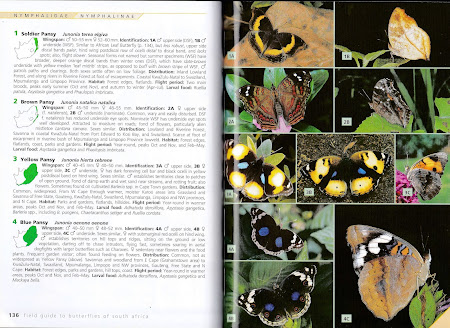 The Pansy species.  Blue Pansy is the name given to Junonia oenone in South Africa


South Africa shares many species of Junonia with Southeast Asia. There are 6 species, of which J. orithya (Blue Pansy in Singapore) is also extant as a different subspecies. However, in South Africa, it is called the Eyed Pansy instead, whilst the common name Blue Pansy is reserved for another species, Junonia oenone oenone. 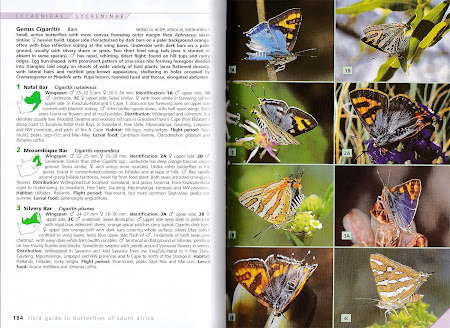 The Bar species (related to the Silverlines in Asia)


The Lycaenidae family features amongst the largest number of species worldwide. Over in South Africa, the genus Cigaritis is related to the Spindasis found in our part of the world. And indeed, the jury is out (or rather, still debating) on which should be the "right" genus name for these pretty Silverlines. They are called "Bars" in South Africa but are no less pretty than their Asian counterparts. 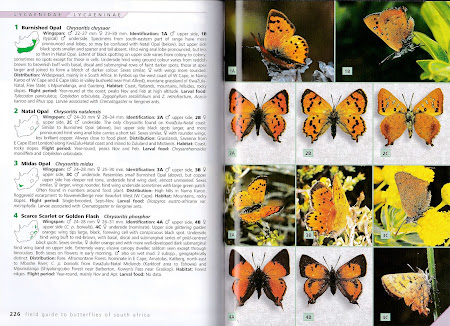 Amongst these amazing Lycaenidae is the Golden Flash (Chrysoritis phosphor) a sought-after rarity in afromontane forest. Read the humourous article by Paulo and Rob Candotti about how Steve managed to capture one of these beauties. 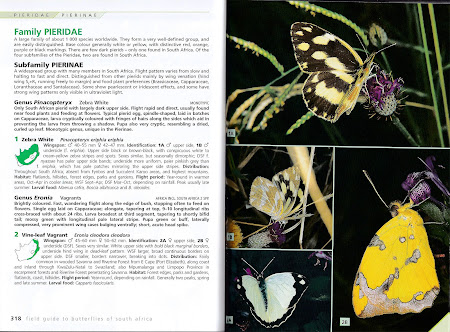 The family Pieridae features the same white and yellow species that we can find all around the world, and South Africa's diverse range of these usually fast-flying brightly coloured butterflies is no exception. Some of the genera that are similar to the Southeast Asian butterfly fauna are Appias, Leptosia, Eurema and Catopsilia. 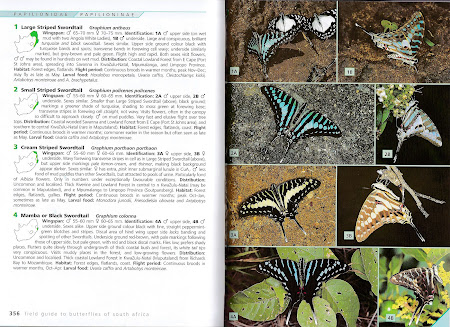 
The Birdwings and Swallowtails are amongst the most spectacular butterflies in the world. South Africa has 14 species in only two genera - Papilio and Graphium. As a comparison, Singapore is home to 18 species of Papilionidae. However, the Swordtails of South Africa are gorgeous and also share the same mud-puddling habits of their Asian cousins. 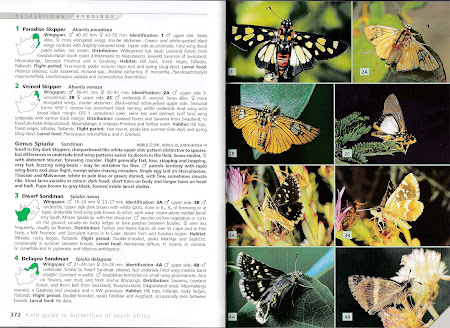 Some colourful Skippers of South Africa


The final family, the skippers or Hesperiidae showcases some pretty amazingly coloured species in South Africa. Generally similar in appearance to their Asian cousins amongst the majority of the species, the Hesperiidae of South Africa features a good variety of brown, orange and spotted species. 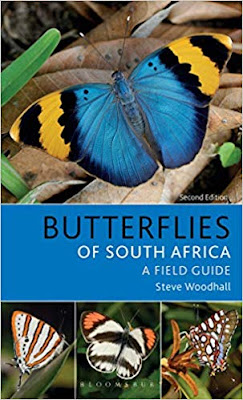 Coming Soon! The 2nd Edition of Butterflies of South Africa by Steve Woodhall


With this short blogpost introducing Steve Woodhall's Butterflies of South Africa, I hope that I have whetted your appetite for South African butterflies. If you are thinking of getting a copy of the book, the advice is don't! The reason is that Steve has been working on a 2nd edition of this book and will certainly outdo himself in the forthcoming 2020 edition that will be out on the shelves in May next year (according to Amazon).


Text by Khew SK : Photos reproduced from Butterflies of South Africa, with the kind permission of Steve Woodhall.

Posted by Commander at 7:22 PM 0 comments