The Spider and the (Butter)Fly

The Spider and the (Butter)Fly
A Tale of Life and Death of a Butterfly
Will you walk into my parlour? said the Spider to the Fly,
'Tis the prettiest little parlour that ever you did spy;
The way into my parlour is up a winding stair,
And I've a many curious things to show when you are there.
Oh no, no, said the little Fly, to ask me is in vain,
For who goes up your winding stair can ne'er come down again.* 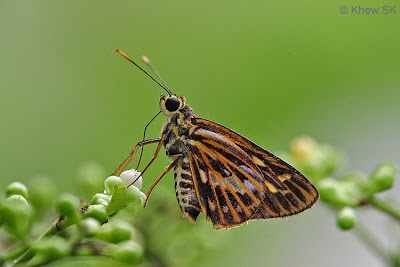 T'was a bright and sunny morning, and it had rained the whole day before. The butterflies were hungry and were up and about, feeding after a day of starvation and taking shelter from the pattering rain and winds. The flowers of the Bandicoot Berry (Leea indica) proved too tempting for many species of butterflies. 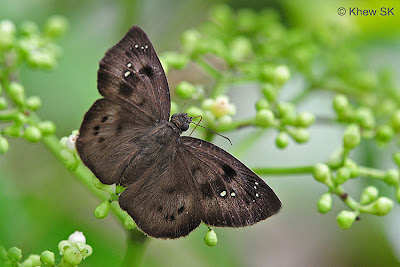 The feeding frenzy began, as the butterflies were over each other to get at the much-needed nectar and nutrition that they required to sustain their short lives. They even had to compete with bees, flies and other insects that similarly needed to fulfil their basic needs. 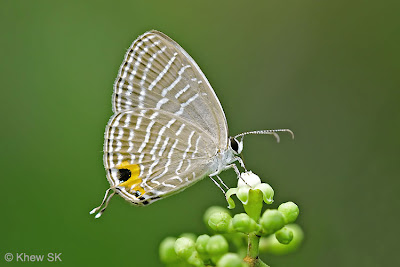 As I watched the butterflies frolicking and feeding happily, so too, was another creature lurking under a nearby leaf. This little spider was waiting patiently, watching and crouching stealthily under the leaf. Like the feeding butterflies, the wet weather a day ago probably kept it from having its daily meal, and this was an opportunity to satiate its hunger. 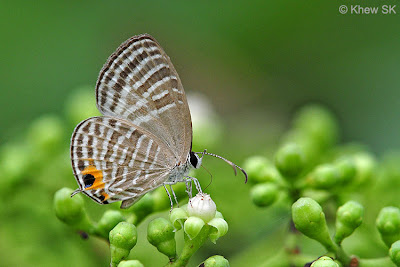 An unsuspecting Common Caerulean feeds, moments before its death at the jaws of a spider

A number of Common Caeruleans (Jamides celeno aelianus) continued their feeding frenzy as the spider inched closer and closer to the flowers of the Leea. One unsuspecting individual, in its haste to taste the nectar of the flower, came dangerously close. But yet the spider did not strike yet, biding its time, to ensure that it will be successful in its hunt this day. 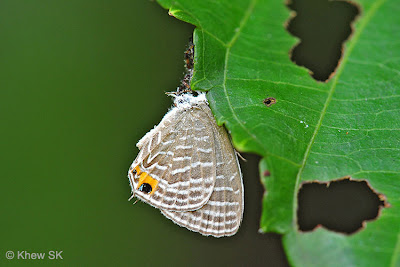 In the blink of an eye, the spider strikes and drags the Common Caerulean under a leaf

But the Common Caerulean tempted fate once too often, this time stopping for a moment too long and the spider struck with lighting speed, clamping its jaws on the thorax of the butterfly with amazing accuracy, injecting its poison into the muscles within the thorax that power the wings and legs of the butterfly. The butterfly was almost instantaneously immobilised and went limp, as the spider quicky dragged its prized catch under the leaf. 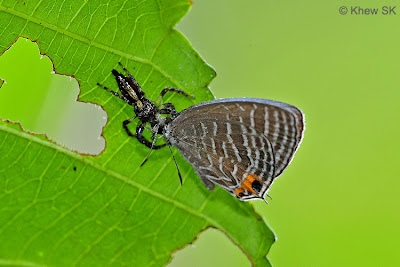 "She's all MINE!" says the spider

As I watched and looked under the leaf, there the spider was, looking almost smug in its expression, and holding on tightly to its now lifeless prey, as if saying "She's all mine!". 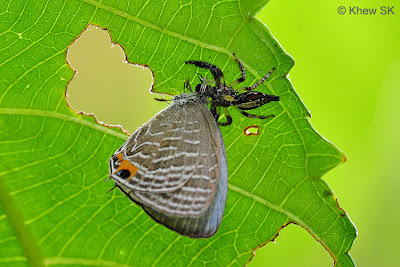 It tried to move quickly away as I approached closer for a few shots, but still clutching on to the poor butterfly, loathe to lose such a tasty morsel. And after a few moments of distraction, it scurried off to the safety of a clump of leaves to feed happily without further irritating interruptions from any human intruders. 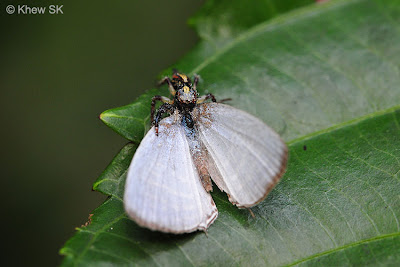 So ends the short life of the Common Caerulean, and the story of another day in the world of predator and prey. Butterflies have no defence against predators and the earlier articles in this blog on Butterfly Predators and Survival Strategies spoke about the ways they try to even the odds to survive that extra day. But even so, a large number still probably end their lives prematurely in the jaws of a predator such as the spider. 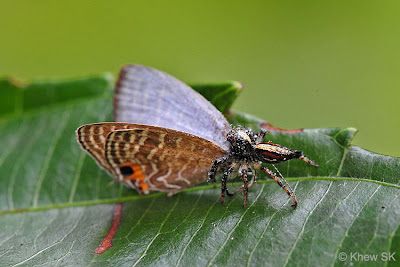 I'm going to my parlour. Leave a message with my answering service

Alas, alas! how very soon this silly little Fly,
Hearing his wily, flattering words, came slowly flitting by;
With buzzing wings she hung aloft, then near and nearer drew,
Thinking only of her brilliant eyes, and green and purple hue --
Thinking only of her crested head -- poor foolish thing! At last,
Up jumped the cunning Spider, and fiercely held her fast.
He dragged her up his winding stair, into his dismal den,
Within his little parlour -- but she ne'er came out again! *
* The Spider and the Fly - a poem by Mary Howitt (1799 - 1888)
Text & Photos by Khew SK
Further Reading :
Posted by Commander at 7:00 PM 1 comments