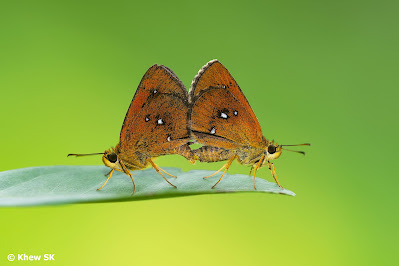 A mating pair of Chestnut Bob perched on a leaf
The first half of 2022 is almost over, and the world has made good progress to pivot towards a post-pandemic normalcy. Whilst the dark memories of lockdowns and facing the spectre of Covid19 is still fresh in the minds of everyone, over two years of an unprecedented battle against the pandemic seems to be almost over. With only a few countries still adopting a different stance towards managing the virus outbreaks, the rest of the world begins to shift towards a new world of living with it. 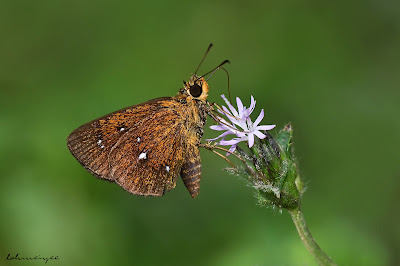 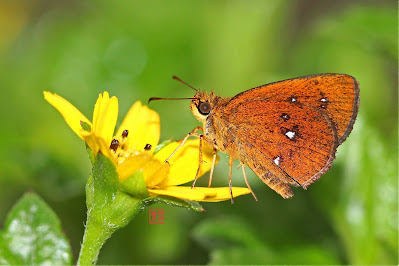 Chestnut Bobs feeding on wildflowers - top : Elephant's Foot weed and bottom : Singapore Daisy
Inter-country travel has very much resumed as many countries welcome tourists and a boost to their respective economies. Businesses, battered by over two years of economic slowdown, start to claw their way out and work towards recovery. However, with the Russia-Ukraine war still going on, with no apparent hope of a ceasefire yet, the world braces itself for increased costs, inflation and further economic turmoil. 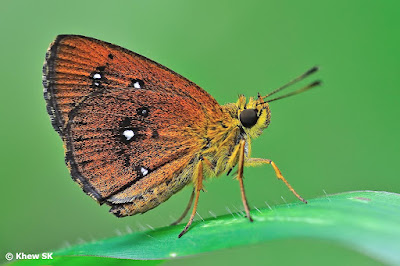 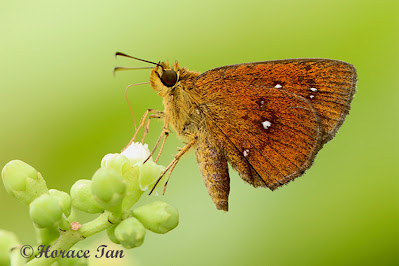 A Chestnut Bob feeding on the flower of the Bandicoot Berry
Back in Singapore, day-to-day existential issues like rising costs and inflation have begun to pinch at the pockets of the ordinary Singaporean. The Malaysian chicken ban didn't help things as another favourite meat item will be more costly in the near term. It's also the first time for many years that I can remember, that the price of the basic 95 Octane petrol has risen to over S$3.00 per litre! 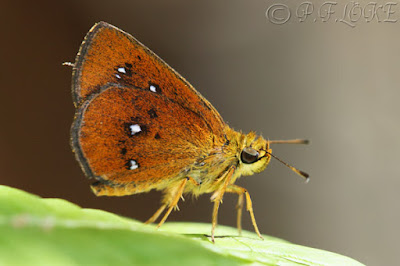 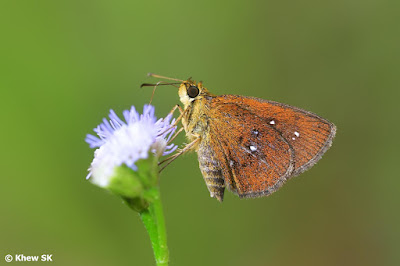 A Chestnut Bob feeding on the flower of the White Weed
The weather phenomenon has also been rather erratic, with the prevailing South West monsoons hitting Singapore, with more rainy days in June than normal. This is apparently due to a more prominent La Nina effect, which is supposedly predicted to weaken in the following months. However, from the postings of the diversity of butterfly species on our FaceBook group, the weather did not seem to have an adverse effect on our butterfly activity. 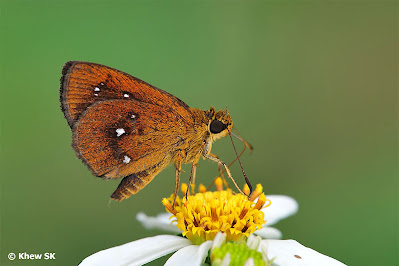 A Chestnut Bob feeding on the flower of the Spanish Needle
Our Butterfly of the Month for June 2022 is the diminutive and rather common Skipper, the Chestnut Bob (Iambrix salsala salsala). It is one of two species from the genus Iambrix to be found in Singapore. A widely distributed species, the Chestnut Bob has been recorded all over Singapore, but is most common in open grassy areas in urban parks and gardens. As its caterpillar host plants are common grasses - Ottochloa nodosa and Axonopus compressus (Common Cow Grass), the butterfly is commonly seen. 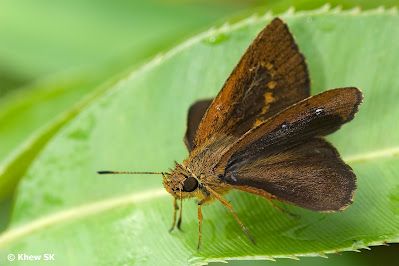 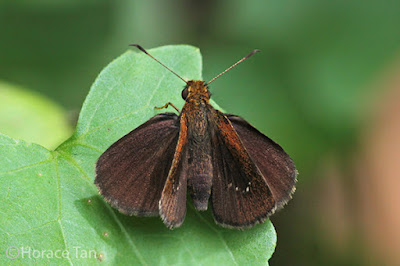 Upperside of the Chestnut Bob - Top : Male, Bottom : Female
The Chestnut Bob is dark brown above, with a curved macular post-discal band on the forewing above. This band is replaced by whitish spots in the female of the species. On the underside, the wings are dusted reddish-brown with a series of black-edged white spots on the underside of both wings. The cilia is brownish-black on both wings. 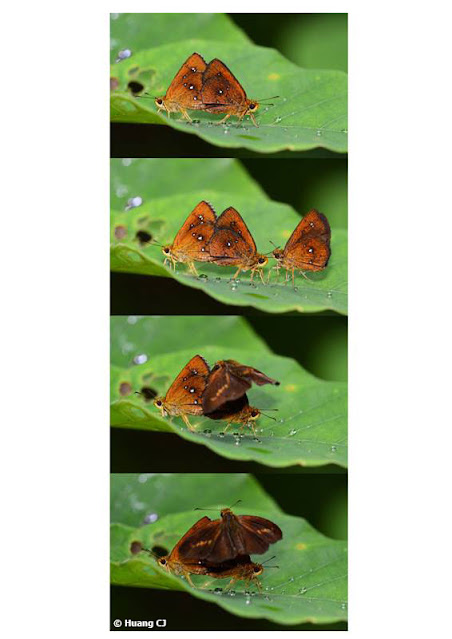 A mating pair of Chestnut Bobs being harassed by another male
The abdomen is banded, whilst the palpi is pale orange-yellow and thick and hairy. The antennae are brown throughout and the apiculus prominent. The eyes are dark chocolate brown throughout. The legs are pale orange-yellow and spiked, as with many skippers. It is a small butterfly, with an average wingspan of about 25mm. 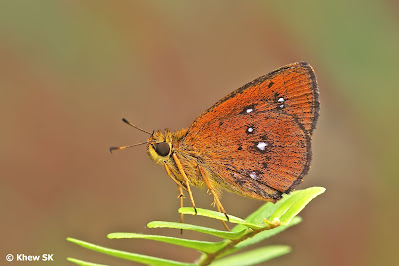 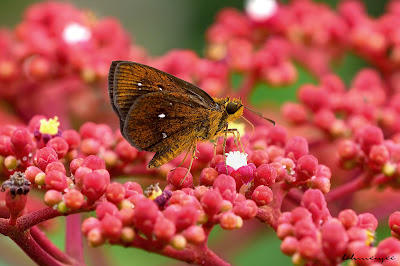 A Chestnut Bob feeding on the flower of the Red Tree Shrub
The Chestnut Bob is skittish and flies rapidly, usually at low level above open grassland and shrubbery. It stops to sunbathe with its wings partially opened in the usual skipper fashion. It is often observed feeding on wildflowers and various other small flowering plants. Occasionally, it is also seen feeding on bird droppings on the top surface of leaves.
Text by Khew SK : Photos by David Chan, Huang CJ,  Khew SK, Loh MY, Loke PF and Horace Tan
Posted by Commander at 5:39 PM