The Disappearing Acts
Now You See Me, Now You Don't 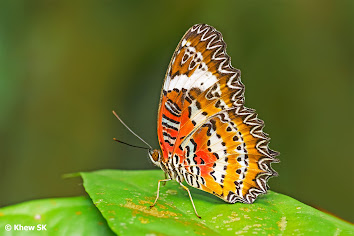 A Plain Lacewing (Cethosia methypsea methypsea), one of the new discoveries recorded in the 1990's appeared and disappeared for many years before reappearing again, and has not been seen since 2016
Over the years, the number of species spotted and recorded in Singapore has continued to increase. Of these, some have become resident species after they have managed to sustain a viable population in Singapore. With adequate availability of host plants, these species have continued to breed and colonise their preferred habitats and some of these species, though considered non-native or exotic, have become a familiar sight in our local butterfly scene. 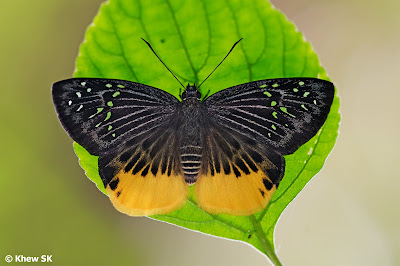 A Yellow Flat (Mooreana trichoneura trichoneura) that was first discovered at the NTU area in 2012 but individuals have continued to be spotted over the years
Some of these exotics that have been able to find a home in Singapore are species like the Tawny Coster (Acraea terpsicore), Leopard Lacewing (Cethosia cyane), Common Jay (Graphium doson evemonides), Pale Grass Blue (Zizeeria maha serica), Two Spotted Line Blue (Nacaduba biocellata), Orange Tailed Awl (Bibasis sena uniformis) and Yellow Flat (Mooreana trichoneura trichoneura), just to name a few of the over 35 new discoveries to Singapore. Of these, some have become common in the environment and are often encountered in urban parks and gardens, whilst others continue to be very rare. 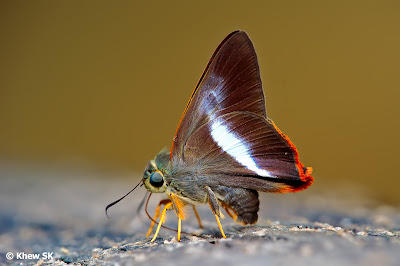 The Orange Tailed Awl (Bibasis sena uniformis) a new discovery, continues to be spotted from time to time and its caterpillars were once "common" at the Singapore Botanic Gardens
However, there are some species that appear over a period of time, when several pristine individuals were seen for several weeks. Then for some mysterious reason, they disappeared altogether and not seen for many years. I am not referring to those species that are singly or randomly spotted, suggesting that they may be migrants, strays or vagrants from neighbouring countries. Or they could simply be very rare native individuals that are somehow surviving in Singapore's dense forested areas. 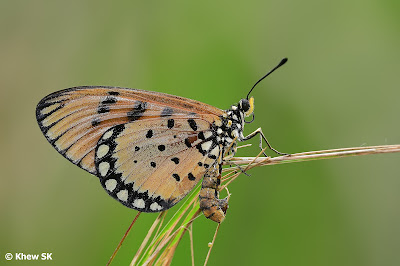 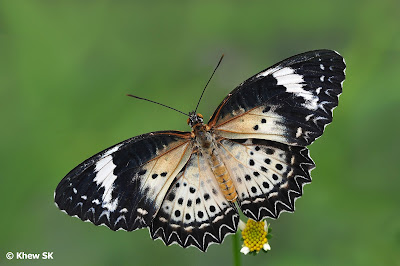 The Tawny Coster (Acraea terpsicore) and Leopard Lacewing (Cethosia cyane) are exotic visitors that are found relatively commonly in Singapore today
In this blogpost, we investigate three different butterflies - all non-native species, that have, for a short period, been spotted in very localised areas - even in numbers, but then after a few weeks or months, went completely missing and have not been seen for some time. What happened to these species? Perhaps their host plants were insufficient to sustain a population? Were they subject to genetic in-breeding that wiped out the population? Or was there some other reason to explain their disappearance? Will they re-appear again some time in the future?
1. The Malayan Jester (Symbrenthia hippoclus selangorana) 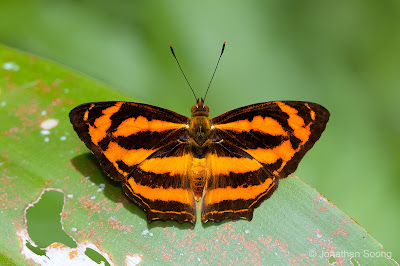 A pristine Malayan Jester (Symbrenthia hippoclus selangorana) sunbathes on a leaf at Dairy Farm Nature Park
The Malayan Jester was first recorded as a new discovery to Singapore in early 2012. Back then, an individual was first spotted in the western part of Singapore at the grounds of Nanyang Technological University. A subsequent individual was spotted a few days thereafter, and then there was no further sign of this species 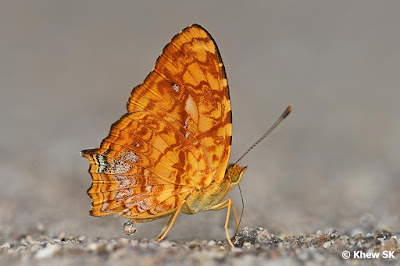 Then, six years later, observations of this species were made over the period 2018-2019 at the Dairy Farm Nature Park. From the flurry of posts on social media, the Malayan Jester suddenly became "common" for a few months from around Oct 2018 to Jul 2019. It was seen quite regularly in the area and sometimes several individuals were spotted together. From the observations, quite a few of the butterflies photographed were pristine, suggesting that they had just eclosed recently, and could not have been migratory individuals (usually with worn out or tattered wings). 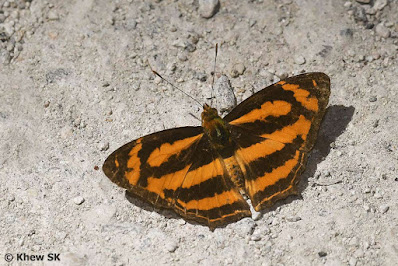 Then all of a sudden, the species disappeared altogether. Visits to the Dairy Farm area no longer yielded any sightings of this species. The Malayan Jester left town. As suddenly as it had appeared and became common, the species went missing again. Did something happen to the colony flying at Dairy Farm? Will it be back again anytime soon?
2. The Common Yeoman (Cirrochroa tyche rotundata) 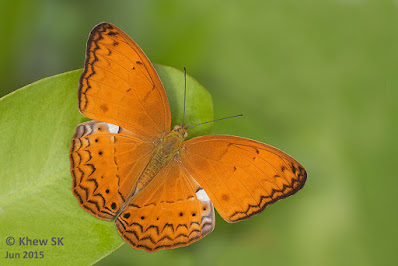 A pristine male Common Yeoman sunbathes on a leaf at the Singapore Botanic Gardens
Some time in Jun 2015, a couple of sightings of the non-native Common Yeoman appeared. A species that is not rare in Malaysia, the Common Yeoman has not been recorded from Singapore before until those encounters in 2015. The bright orange coloured butterfly flies erratically and resembles the common Leopard found in our urban areas. This sighting was, interestingly, at the urban Singapore Botanic Gardens, and not in the forested areas where the species is more often found in Malaysia. 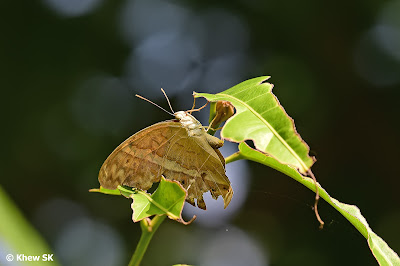 A tattered female Common Yeoman ovipositing on its caterpillar host plant at SBG
A few subsequent visits to the SBG showed that there was a small colony of this species breeding at a very localised area where its caterpillar host plant grows. All of a sudden, the species became "common" only in that area, and again, several individuals - both males and females, were found there. We even managed to document the full life history of the Common Yeoman from that encounter. 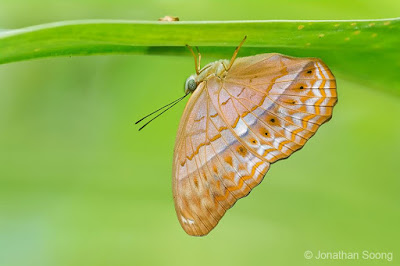 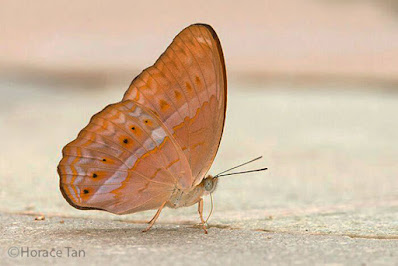 A female (top) and male (bottom) Common Yeoman spotted at the Singapore Botanic Gardens for a short period in 2015 and subsequently in 2018.  It has not been seen since. Is it still around?
It continued to be seen at SBG for about 3 months until Sep 2015, then vanished. Subsequent visits to that location were not fruitful, even though the host plants were still there and nothing has changed in the habitat. It was only about 3 years later, in Apr 2018 that another sighting was recorded at SBG again. But this time around, it did not stay long and it disappeared after that. It is not known for sure if this species continues to survive in Singapore. How do we help to conserve this species sustainably? What are the secrets that the butterfly need to tell us to help it continue to exist in Singapore?
3. The Plain Lacewing (Cethosia methypsea methypsea) 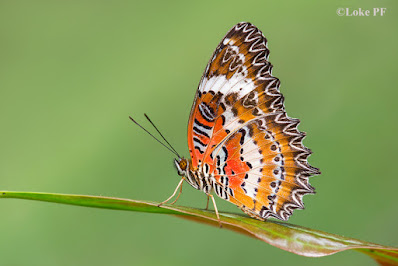 Butterfly watchers had to wait for 14 years for the return of the Plain Lacewing and in recent years, it has been missing again.
The Plain Lacewing was first recorded as a new taxon for Singapore some time back in early 1991. It was first observed at Upper Seletar Reservoir Park. Back then, I recalled that, whilst it was not common, it made regular appearances, feeding at the flowering plants in the reservoir park. The related and similar-looking Malay Lacewing was much more common. 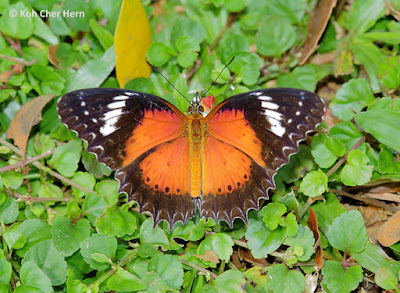 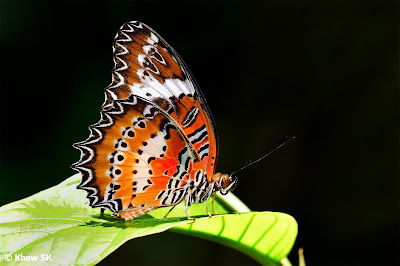 Then suddenly, in 2014, sightings of the Plain Lacewing were reported by members of the butterfly watching community! After a long absence of 14 years, it was back! Several individuals were spotted over a few weeks, and seen mainly at the Upper Seletar Reservoir Park's forested areas. During that time, we also had the fortune of being able to document the species' life history, before it disappeared. Our records showed another sighting in mid 2016, two years later, and then the sightings stopped altogether. Why did it reappear again after 14 years, only to disappear again? Where did it "hide" all this time? Will butterfly watchers have to wait another 14 years again before spotting a Plain Lacewing again in Singapore?
Text by Khew SK : Photos by Khew SK, Koh CH, Loke PF, Jonathan Soong and Horace Tan
Posted by Commander at 9:42 PM