In Part 2 of this feature article of Singapore's Sun-Loving Pansies, we feature the remaining two - Grey Pansy and Peacock Pansy. Both these species are comparatively rarer than the Blue Pansy and Chocolate Pansy, but still can be found regularly in their favourite locations in Singapore.
The Grey Pansy (Junonia atlites atlites) 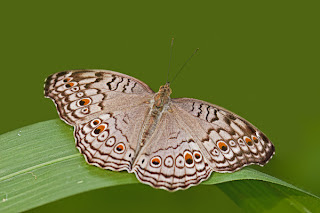 The Grey Pansy is the rarest of the four Pansies in Singapore. However, it appears quite seasonally, and in certain locations more than 3-4 individuals may be found. The butterfly is a pale grey above, with the undersides lighter. Both wings have dark brown irregular post discal and submarginal lines. The more prominent ocelli are orange crowned with black spots. The species is characterised by distinct wet and dry season forms where the underside markings are more pronounced and darker in the wet season, with the markings showing a tendency towards obsolescence in the dry season form. 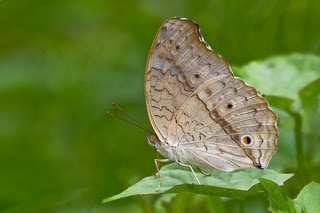 The species flies with a flap-glide manner and on bright sunny days, it stops to rest on the upper surfaces of leaves with its wings opened flat. It tends to return repeatedly to its favourite perch after flying sorties to chase away any 'intruders' into its space.
The caterpillar is a dull black with white longitudinal stripes and feeds on a small-leaved host plant which can be found in water-logged areas. The known host plant is Hygrophila sp.
The Peacock Pansy (Junonia almana javana) 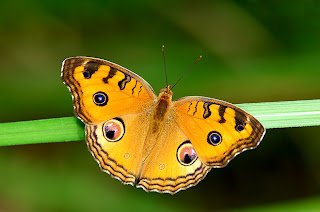 The Peacock Pansy is bright orange above with prominent white-eyed ocelli which may have given it its common name "Peacock". Both the forewings and the hindwings have a prominent ocelli each, with the one on the hindwings larger and coloured orange, black and white. The undersides are paler and the eye-spots are more lightly marked.

The species is relatively common, and can be found in parks, gardens as well as in the nature reserves. It is a fine-weather species, and tends to be more active in open grassy areas in bright sunshine. Like its other cousins in the Junonia genus, it adopts a flap-glide flying style and rests on its favourite perches with its wings opened flat. When the weather cools down, it stops with its wings folded upright and tries to camouflage itself amongst the grass and leaves. 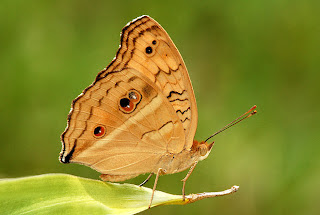 The caterpillar is pale ochreous brown with black longitudinal stripes and has been bred on Ruellia repens. An interesting observation of ovipositing females of this species is that the females often lays her eggs on nearby plants instead of directly on its host plant. There was even an occasion when it laid an egg on a stone! However, the actual host plant is always nearby, and it is likely that the emerging caterpillar will be able to find the hostplant to eat, albeit having to crawl much further to reach the host plant than usual.
Text by Khew SK : Photos by Sunny Chir and Khew SK
Posted by Commander at 9:23 PM 0 comments