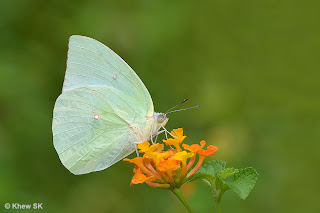 The Lemon Emigrant is a common butterfly in Singapore, and can often be seen even in urban areas flying at its erratic and powerful speeds.  As the caterpillars of this species feed on several urban roadside species of Senna, it is widely distributed across Singapore from the city pocket parks to the nature reserves.  The Lemon Emigrant is polymorphic and occurs in at least seven different forms.
Photographed here, is a male form-hilaria one of the relatively common forms of the Lemon Emigrant.  It is predominantly lime green, with the distinctive red-ringed silver cell spots.  On the upperside, there is a thin black border on the forewings.  In parks and gardens, Lantana is one of the favourite nectaring plants of the Lemon Emigrant.

Posted by Commander at 7:30 AM 4 comments