Life History of the Malayan Lascar 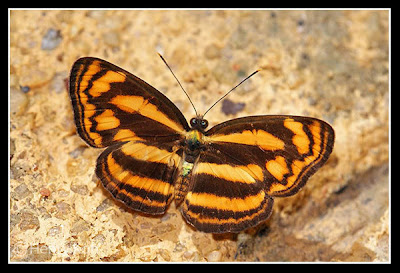 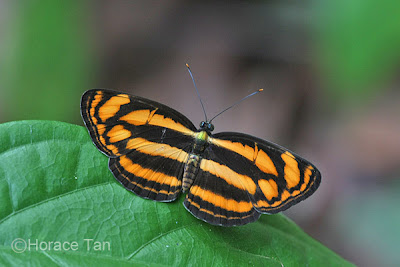 A Malayan Lascar perching at a leaf edge.

Physical Description of Adult Butterfly:
The adult has vein 10 rising from the cell on the forewing. Above, the wings are black with broad orange bands and patches arranged in the usual manner. There are two submarginal bands on the forewing, the outer one narrower, and the inner one broader with serrated inner edges. The inner submarginal band typically reaches the costa. A distinguishing feature is that the inner submarginal spot in space 3 on the forewing is usually wider than the adjacent spots in spaces 2 and 4. This is more so in the female than in the male. The male has a greyish speculum in the costal area. Underneath, the wings are marked similarly as on the upperside but with the orange bands/streaks broader and in a much paler shade of yellowish orange. 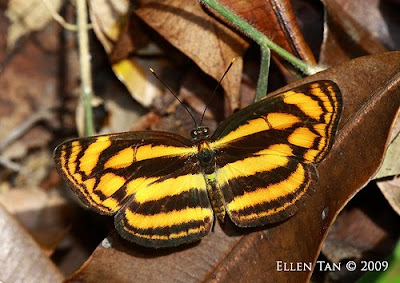 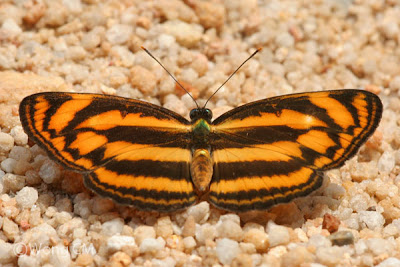 Field Observations of Butterfly Behaviour:
This species is relatively common in Singapore and can be found in multiple habitats including nature reserves, western wastelands and the Southern Ridges. This is likely due the wide distribution of its host plant, Erycibe tomentosa, in these locations. The sun-loving adults are often observed gliding in a "sailing" fashion. The adults also visit flowers and ripening fruits for energy intakes. 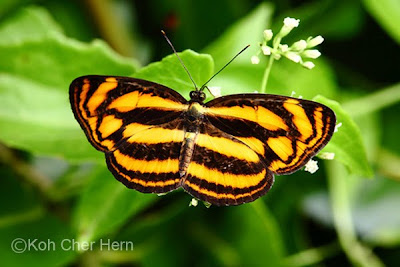 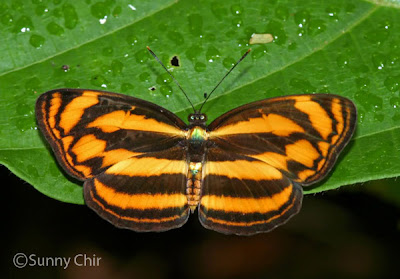 Another Malayan Lascar displaying its uppserside.

Early Stages:
The prefered host plant, Erycibe tomentosa, is a woody climber, and locally can be found on hedges, edges of forests and sides of forest trails, in areas such as the Central Catchment Area and Southern Ridges. 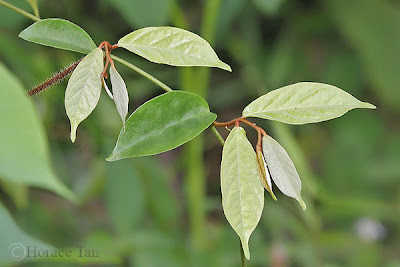 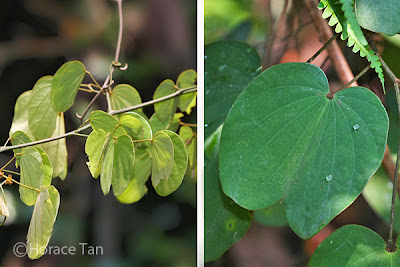 The caterpillars of the Malayan Lascar feed on the young to middle-aged leaves of the host plant. They typically feed in the open on the leaf surface, and rest on the midrib between feeds. The lamina of each leaf is usually eaten from the tip, leaving the midrib uneaten. As with the Common Sailor and the Short Banded Sailor, the caterpillars of the Malayan Lascar have the habit of cutting and hanging leaf fragments for concealment as part of its feeding routine. In addition, the caterpillars show a preference for leaf fragments which are browning and decaying.

A sequence of three shots showing the cutting of leaf fragments by a 2nd instar caterpillar.

A sequence of 4 shots showing how the first leaf fragment is cut down further in a 5-day period. The caterpillar continues to eat the brown and decaying fragments. 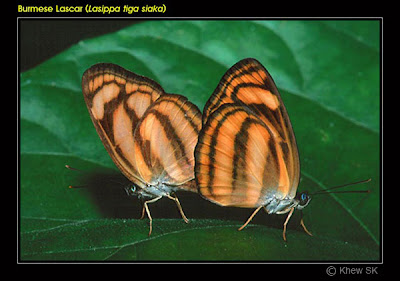 A mating pair of the Malayan Lascar. 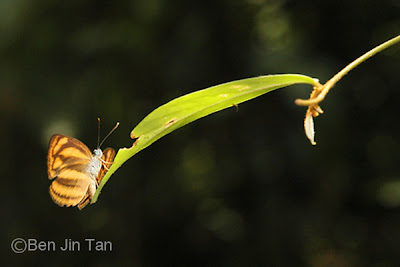 A female Malayan Lascar ovipositing an egg at the leaf tip of its host plant.

The eggs of the Malayan Lascar are laid singly at the tip of a leaf on the host plant. The ovipositing female shares the same ovipositing routine with quite a few Nymphalidae species: After landing on a leaf and finding it suitable, the female reverses along the leaf surface, typically along the midrib, until its abdomen tip reaches the leaf tip, and there it deposits an egg. 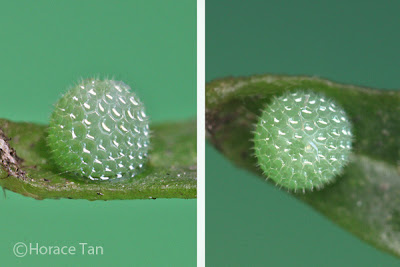 The eggs are somewhat globular in shape, with surface marked with hexagonal pits and bearing spines at pit corners, giving them the appearance of minute sea-urchins. The micropylar sits atop. Freshly laid eggs are green in colour, but turning pale green and then yellowish green when maturing. Each egg has a base diameter of about 1.1mm, and a height of about 1.2mm. 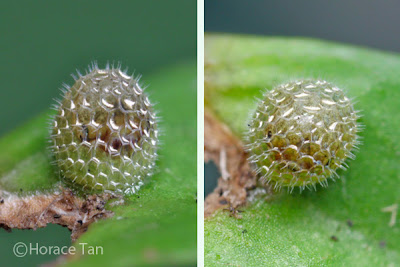 The egg takes about 3-3.5 days to hatch. The young caterpillar emerges by eating away part of the egg shell. The rest of the egg shell becomes the first meal for the newly hatched which has an initial length of about 2.8mm. Its yellowish green body is cylindrical and covered with many small tubercles and short setae. The posterior segment is whitish, and the head capsule is pale brown in color. 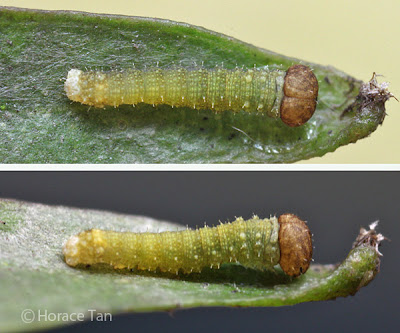 As the caterpillar grows, the body turns increasingly darker green in base colour, and small tubercles turn yellowish green in coloration. Three pairs of subdorsal tubercles becomes larger and prominent on the 2nd and 3rd thoracic segments, and the 8th abdominal segment. After reaching about 4.5-5.5mm in 4-5 days, the caterpillar moults to the 2nd instar. 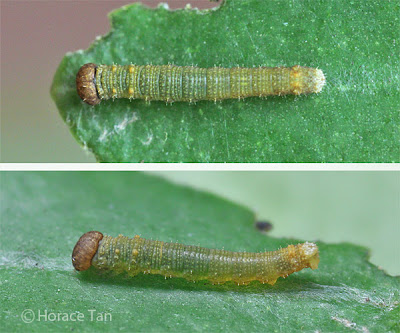 The body color of the 2nd instar caterpillar is yellowish green. Besides tiny tubercles covering most of its body surface, the 2nd instar caterpillar also features spairs of sub-dorsal branched spines, still rather short at this stage, on the 2nd and 3rd thoracic segment and the 8th abdominal segment. The pair on the 8th abdominal segment is much more tightly spaced on the dorsum compared to the other two. 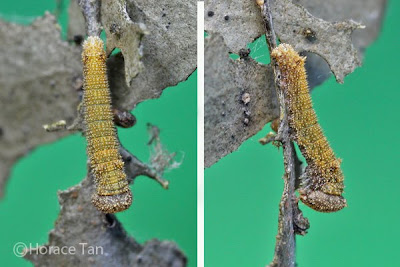 The head capsule is brown and dotted with a number of paler conical tubercles, and has a pair of short apical spines. The outline of a long dorsal saddle (of a lighter shade) ending at the dorsal start to appear at this stage too. A whitish dorsal band can be found on the thorax up to the subdorsal pair of spines on the 3rd segment, and from the pair on the 8th abdominal segment to the posterior end. This instar lasts about 6-8 days with the body length reaching about 7.5mm. 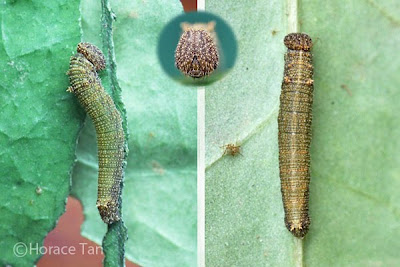 The 3rd instar caterpillar is olive brown with varying degree of green undertones. It has similar body markings as the 2nd instar but with the subdorsal spines much longer and featuring prominent branches, with the pair on the 3rd thoracic segment much longer than the other two pairs, and forward bending. The pair on the 2nd thoracic segment, on the other hand, is minuscule in comparison. The long dorsal saddle is now featured prominently. A series of faint oblique stripes appear on the sides of the saddle. This instar takes about 6-8 days to complete with body length reaching about 11mm. 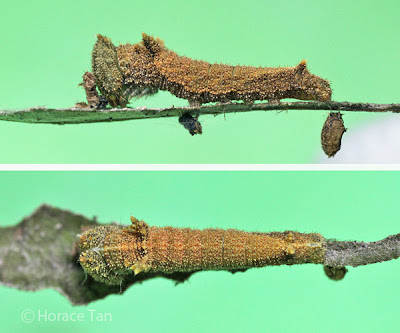 A time-lapse sequence of the movement of a 3rd instar caterpillar along the midrib and through hanging leaf fragments. 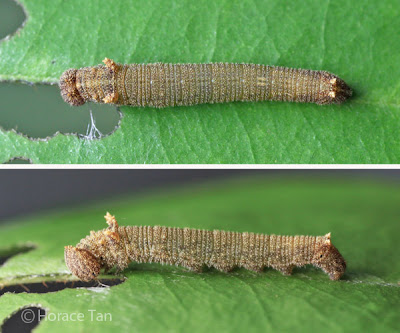 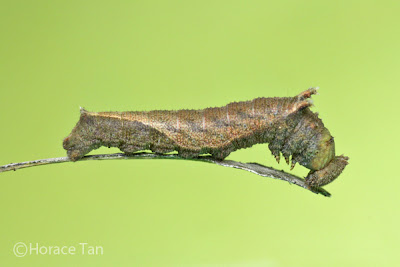 Two views of 3rd instar caterpillar, later in this stage, about to moult. 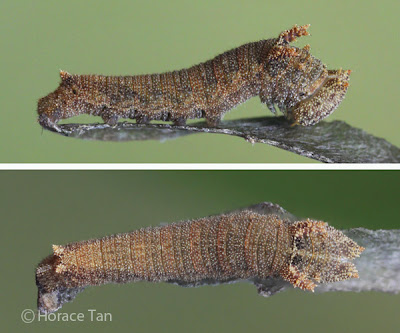 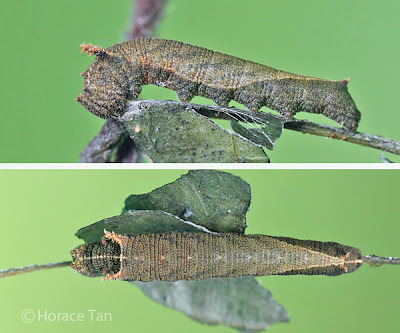 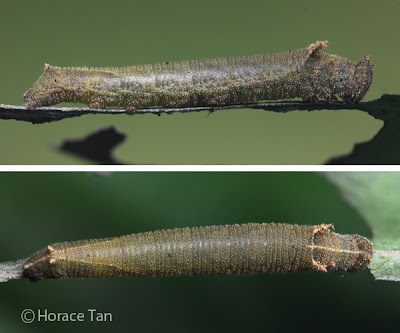 The 5th instar caterpillar is mostly unchanged from the 4th instar in most body markings and features. Again the subdorsal pair of spines on the 2nd thoracic segment grows longer proportionately. Regularly spaced white spots on the dorsum and black spots on the sides also appear. The body colour varies from dark olive brown to greenish brown in a number of specimens. 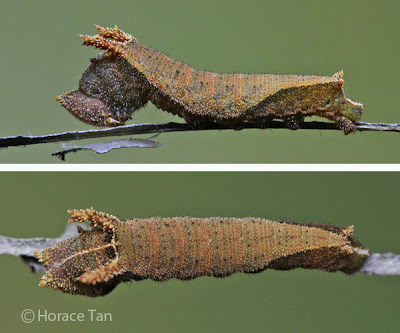 Two views of a 5th instar caterpillar, early in this stage, length: 14mm. 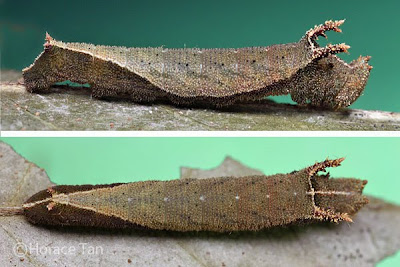 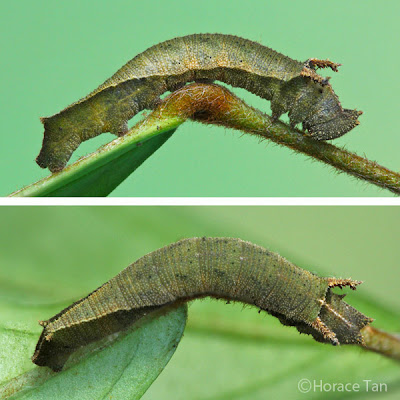 The 5th instar lasts for about 12 days, and the body length reaches up to 24mm. On the last day, the color of the dorsal saddle and the spines changes to pale/pinkish brown. The caterpillar ceases feeding and wanders around. Eventually it comes to a half on a leaf underside, where the caterpillar spins a silk mound on the midrib from which it soon hangs vertically to take on the pre-pupatory pose. 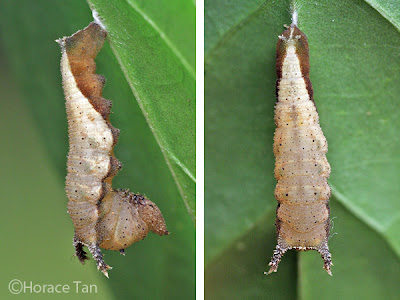 Two views of a pre-pupa of the Malayan Lascar.

Pupation takes place a day later. The pupa suspends itself via an angled cremastral attachment to the silk mound with no supporting silk girdle. It is almost entirely yellowish brown in color. The abdominal segments are slender. The thoracic portion being larger with wing cases dilated laterally. The dorsum of the thorax is angular. The head is bluntly cleft at its front edge with small pointed vertices. Length of pupae: 11-13mm. 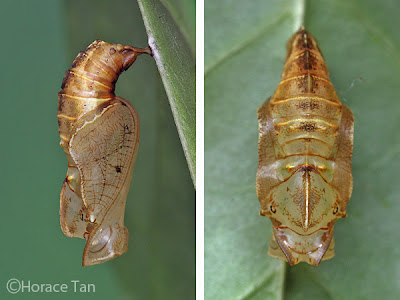 Three views of a pupa of the Malayan Lascar.
After about 6 days of development, the pupal turns dark as the development within the pupal case comes to an end. The orange spots and streaks on the forewing upperside also become discernible. The following day, the adult butterfly emerges from the pupal case. 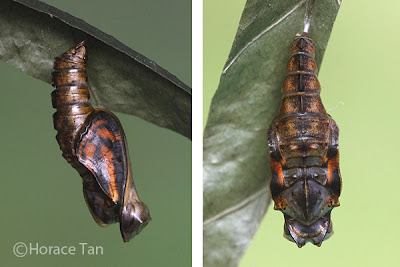 Three views of a mature pupa. Orange markings on the forewings are now visible.
The eclosion event of a Malayan Lascar (time-lapsed sequence). 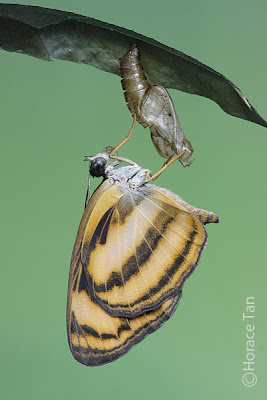 A newly eclosed Malayan Lascar 'drying' its wings on its pupal case. 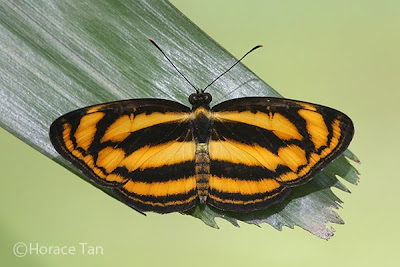 A newly eclosed Malayan Lascar giving us a full view of its upperside.