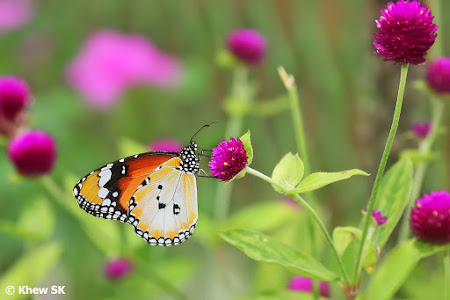 
Adding on to our series of butterflies' favourite nectaring plants, we take a look at a non-native flowering plant called the Globe Amaranth (Gomphrena globosa). In Singapore, it is not very widespread in gardens, but sometimes cultivated as an ornamental plant in landscaped areas and community gardens. The very characteristic and recognisable magenta pom-pom shaped inflorescence is a dominant and attractive feature of the plant. 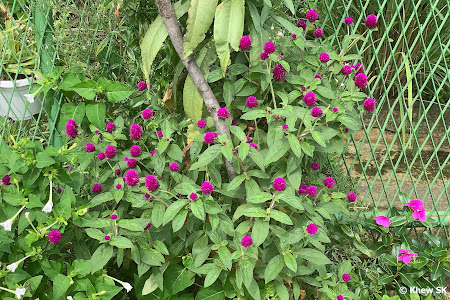 The Globe Amaranth is an edible plant from the family Amaranthaceae. The plant grows upright, attaining a height of 0.3 - 0.6m tall and a spread of about 0.3m. It is considered a low shrub and often cultivated in pots too. It flowers throughout the year and usually does best in open areas in full sunshine. It is an exotic and it does not occur naturally in Singapore and where it grows, it has usually been cultivated. 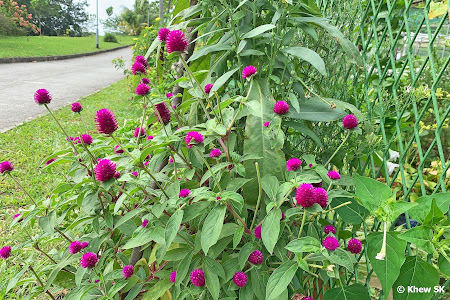 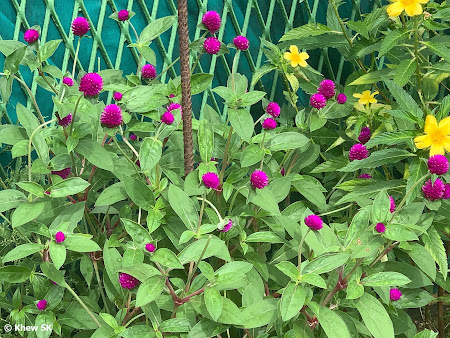 Globe Amaranth plants at a community garden in Singapore

The Globe Amaranth is considered a non-native plant in Singapore. Its region of origin is Central America including regions of Brazil, Panama, and Guatemala. Its presence in Singapore is limited to urban parks and gardens, usually cultivated an accent shrub for its colourful flowers in combination with other flowering plants. 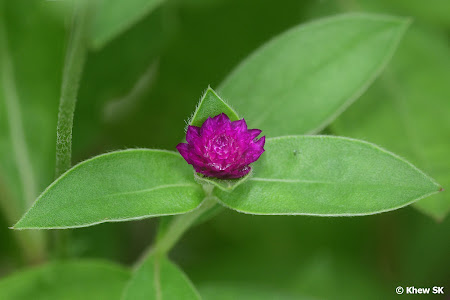 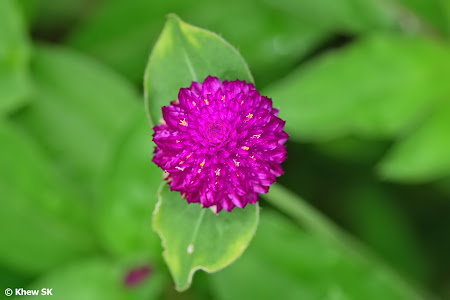 The pretty magenta inflorescence of the Globe Amaranth


As a tropical annual plant, the Globe Amaranth blooms continuously throughout the year. It is very heat tolerant and fairly drought resistant, and grows best in full sun with regular moisture. As the plant flowers and grows older, it is likely to look lanky and unattractive. It is then time to cut it down and let it sprout new shoots to regenerate growth again. 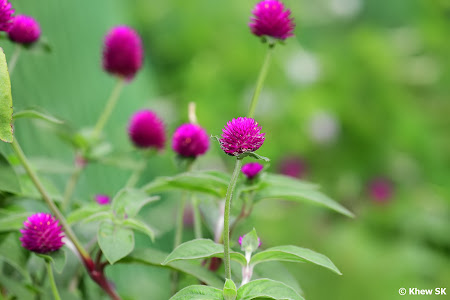 The Globe Amaranth is a compact herbaceous annual that typically grows to about 0.3 to 0.6m tall on upright branching stems. The plant is tolerant of most well-drained soil of moderate fertility, but appreciates regular moisture. However it is important not to overwater it. It grows and blooms best in full sun and is a drought-resistant plant. 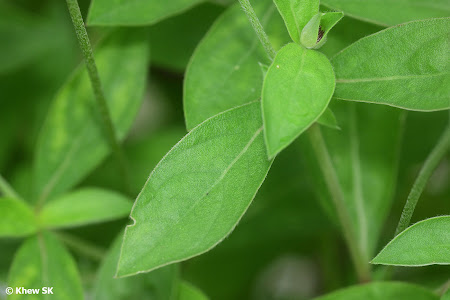 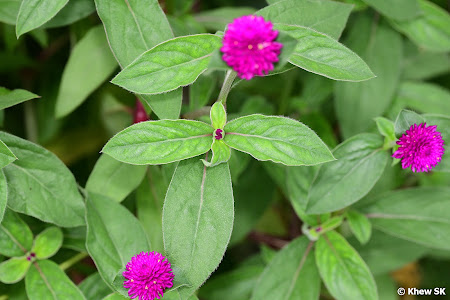 The oblong and hairy leaves of the Globe Amaranth


The leaves are opposite and oblong to elliptical in shape (2–13 cm long, 0.5–5 cm wide). They start out wooly-white when young, but lose this characteristic as they age but turn deeper green with sparsely white hairs when matured. The mid-rib of the leaves can sometimes be tinted magenta, as do the stems. 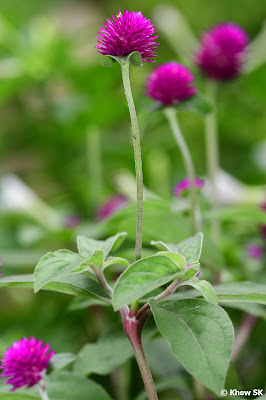 The inflorescence of the Globe Amaranth on its long upright spike

The pom-pom shaped inflorescence are a visually dominant feature of the Globe Amaranth and cultivars have been propagated to exhibit shades of magenta, purple, red, orange, white, pink, and lilac. The inflorescence grows on a long upright spike. 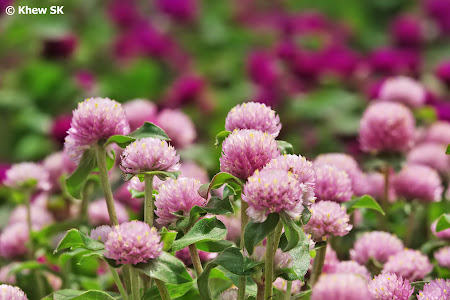 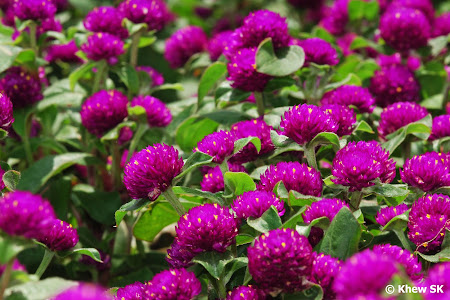 Pink and magenta cultivars of the Globe Amaranth

Within the flowerheads, the true flowers are small and inconspicuous, with white to yellow trumpets that are only visible close up. It is the bright magenta bracts arranged in globose, papery-textured, clover-like flowerheads that provide the real show.

Seeds and young seedlings of the Globe Amaranth

The fruit is a bladderlike pericarp and is unopened at maturity and about 1.5–2.5 mm long. Seeds are shiny reddish brown, reniform, 1.5–2 mm wide and encased in a thick coating. New plants can be propagated by seeds quite easily, or through cuttings from older plants. 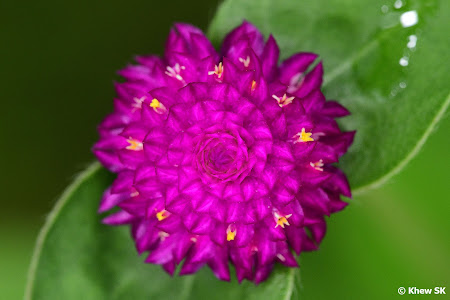 The attractive magenta inflorescence of the Globe Amaranth.  Note that the actual trumpet-shaped flowers of the plant are small and yellow

The dried inflorescence retain their colour well, and is often used in flower arrangements and decorations at weddings, as accent colours in wreaths and in artwork. The plant is also known to have various medicinal properties and is used for its antibacterial and antifungal properties and as an antioxidant. 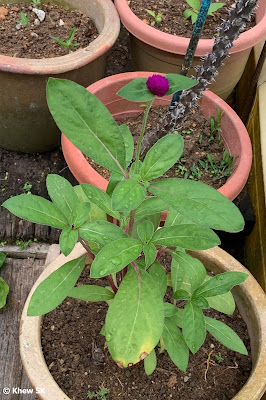 Apart from the mentioned medicinal uses, it has been traditionally used for treating gall stones, nose bleed, and cough. It is a remedy for several respiratory inflammation conditions including bronchial asthma, acute and chronic bronchitis, and whooping cough. It has been traditionally used for reducing high blood pressure and blood sugar levels and this use has been proven through clinical research. 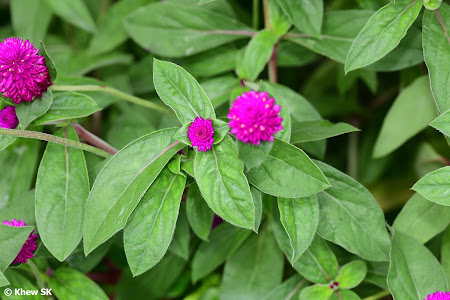 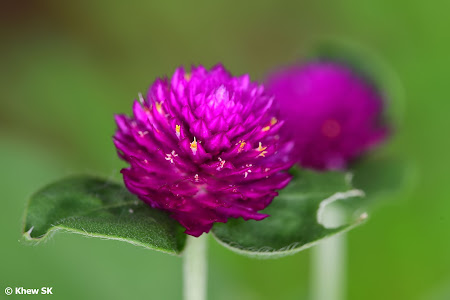 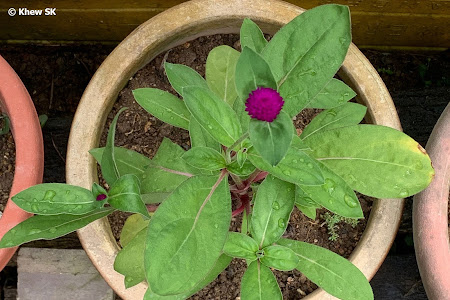 Some species of butterflies visit the flowers of the Globe Amaranth for its nectar. Whilst the flowers are small and the nectar contained within the flowers are probably very limited in quantity, it is surprising that we have seen some relatively large butterfly species feeding on them. We would have expected the smaller Lycaenidae and Hesperiidae to be the main visitors of this plant. 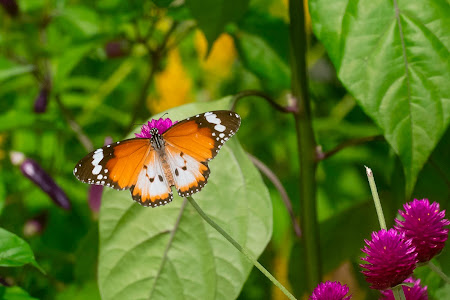 A Plain Tiger feeding on the flowers of the Globe Amaranth

At a community garden, a Plain Tiger was feeding on the flowers of the Globe Amaranth. Whilst this individual had other nectaring choices nearby, like the Purple Snakeweed and Mexican Sunflower, it still chose the Globe Amaranth for its nectaring source. It stayed for quite a long while, moving from flower to flower to feed. 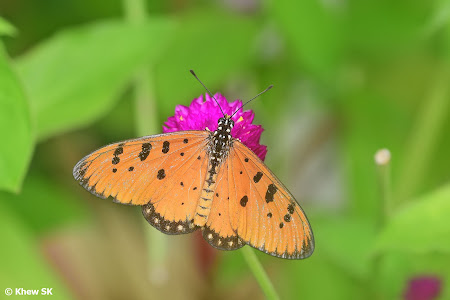 A Tawny Coster feeding on the flowers of the Globe Amaranth 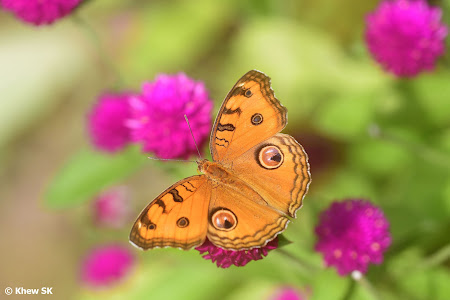 A Peacock Pansy feeding on the flowers of the Globe Amaranth

Two other Nymphalidae, a Tawny Coster and a Peacock Pansy, were also spotted feeding on the flowers of the Globe Amaranth. These are medium sized butterflies that would probably need to feed on many flowers to get an adequate supply of nectar relative to their size. 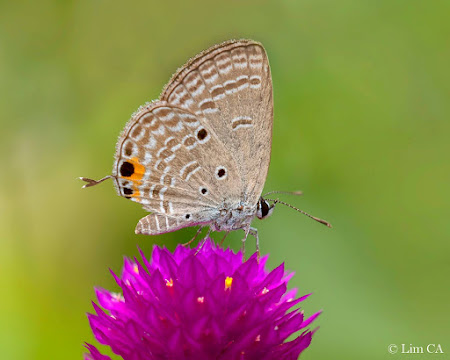 A skipper, probably a Small Branded Swift, stopped to feed on the flower of the Globe Amaranth, whilst a skittish Cycad Blue moved from flower to flower and eventually perched on the magenta inflorescence to rest after a period of feeding. 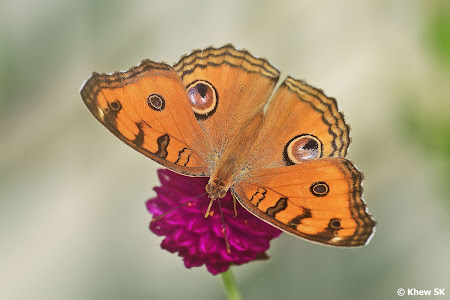 It is likely that a good range of urban butterflies can use the Globe Amaranth as a nectaring source. Hence, this plant could be another species that can be included in the landscaping palette of a butterfly gardener's choice of nectaring plants when designing and planting a butterfly garden.