Life History of the Aberrant Oakblue 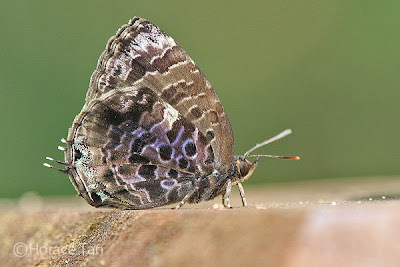 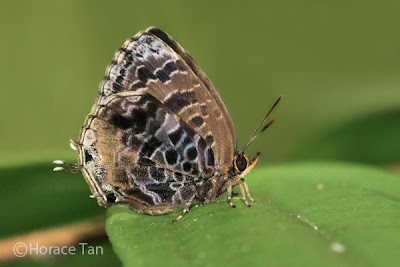 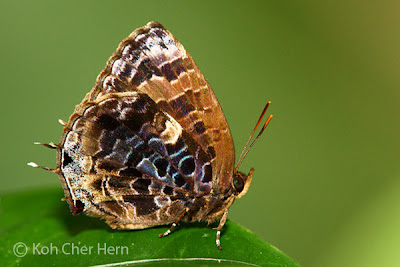 Physical Description of Adult Butterfly:
The Aberrant Oakblue differs from other Arhopala spp. in having a short tail at the end of vein 3 of the hindwing, and a very short vein 9 in the forewing. Both features suggest that Aberrant Oakblue is more closely related to the Flos spp. than its placement in the Arhopala genus would otherwise suggest. Above, the male is deep violet blue with a dark forewing border expanding towards the apex (where it is about 4.0mm wide); the female is shining blue with broader borders. Below, the wings bear cryptic markings with most spots in blackish brown. Pristine specimens carry a strong purplish sheen in the discal area on the hindwing and white shadings in the forewing's apical and subapical areas. Most specimens feature a moderately large white spot at the mid-costal margin of the hindwing. Also on the hindwings, short white-tipped tails are found at the end of veins 1b and 3, and a moderately long white-tipped tail at the end of vein 2. The compound eyes are dark yellow brown. 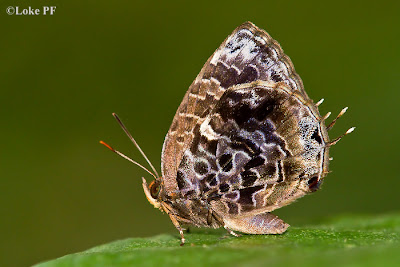 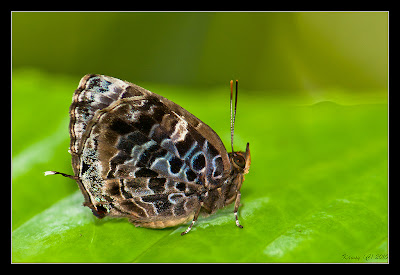 Field Observations of Butterfly Behaviour:
In Singapore, the Aberrant Oakblue is not considered rare and adults can be found in the shaded forested areas within the nature reserves, Southern Ridges, Singapore Botanical Gardens and other wooded areas scattered across the island. They have a strong quick flight and are easily spooked by "overzealous" photographers. They typically rest in the shade among the foliage with upright wings. 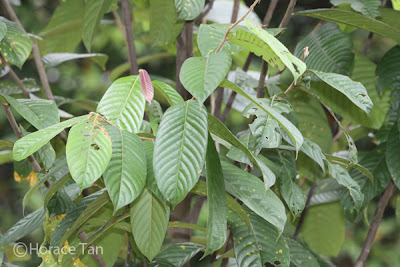 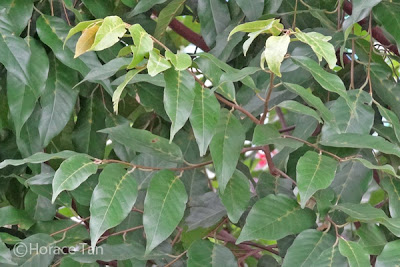 Early Stages:
Thus far it has been established that Hopea pachycarpa and H. odorata are utilized as larval food plants by the Aberrant Oakblue locally. Both plants are in the Dipterocarpaceae family, members of which are commonly utilized by butterfly species in the Arhopala and Flos genera. There are two other yet-to-be identified host plants in the local catchment reserves, both of which are likely to belong to this plant families as well. The early stages of the Aberrant Oakblue feed on the young tender leaves of the host plants, and often lives in the company of attending ants. 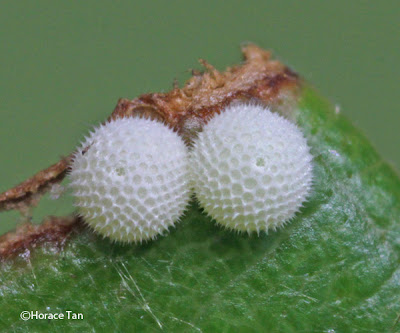 Two eggs of the Aberrant Oakblue.

Eggs are laid singly or in small groups of 2-5 on a young shoot or the underside of a leaf of the host plant. Each egg is about 0.8mm in diameter, white with a very light yellowish green tinge. It is shaped like a pressed bun with a slightly depressed micropylar area atop. The surface has a finely reticulated pattern of intersecting ridges and there are short sharp spikes at the intersections of these ridges. 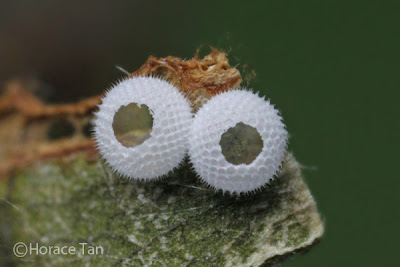 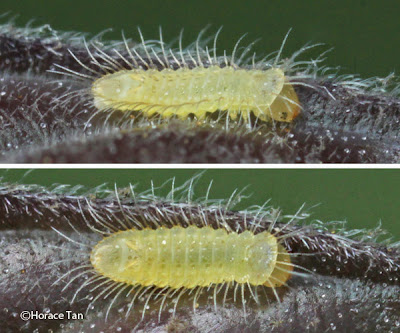 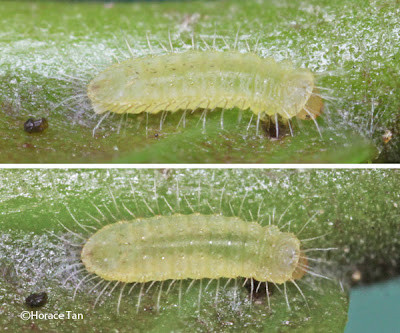 The 1st instar caterpillar feeds by skimming the surface of a young leaf, but later instars are able to consume the lamina in whole. Larval stages of the Aberrant Oakblue are gregarious and a few caterpillars have been observed in the field sharing a leaf shelter and adjacent feeding site with no animosity towards each other. As the 1st instar caterpillar grows, its body color becomes more yellowish green. A faint pinky red patch appears on the posterior abdominal segments. After about 2 days of growth, and reaching a length of about 2.5mm, the caterpillar moults to the next instar. Two views of a 1st instar caterpillar, late in this stage, length: 2.2mm.

The 2nd instar caterpillar features long lateral hairs and a yellowish brown head. Long dorso-lateral setae are no longer present, but many very short setae appear on the entire body surface. A pair of faint dorso-lateral line runs along the length of the body. The prothorax is marked by a large yellowish brown patch. The dorsal nectary organ (DNO) is already visible on the 7th abdominal segment and highlighted with a small dark reddish patch stretching to the 8th segment. A rather large anal plate, black in color, dominates the remaining posterior segments. The pair of the tentacular organs (TOs) on the 8th abdominal segments are also distinguishable at this stage. 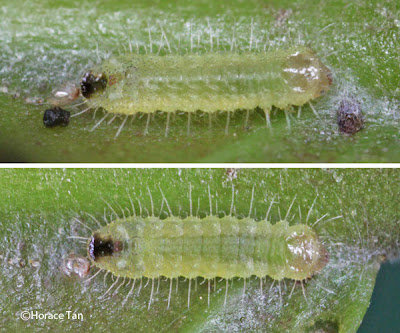 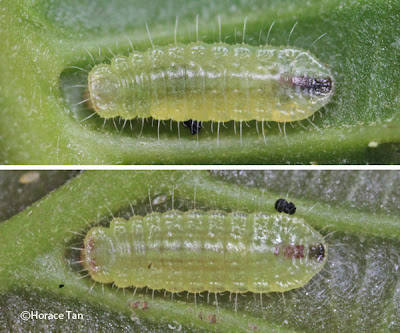 Two views of a 2nd instar caterpillar, late in this stage, dormant prior to its next moult, length: 3.2mm. 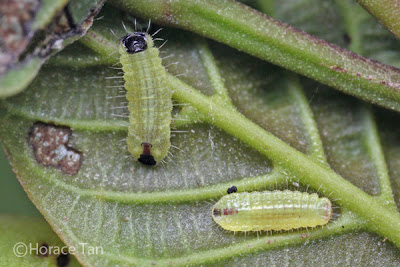 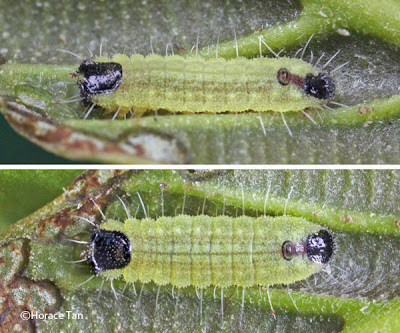 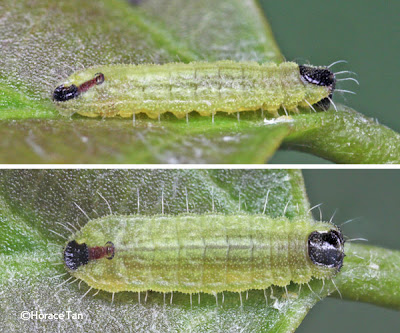 The 4th instar caterpillar has similar markings as the 3rd instar. One notable change is in the prothoracic dark patch which now has two small white patches embedded at its posterior, and one small white patch at its anterior edge. The dorsal and dorso-lateral bands are now more pronounced than in the previous instar. This penultimate istar takes about 4-5 days to complete with the body length reaching 10mm. 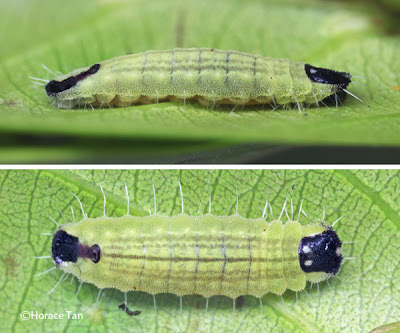 Two views of a 4th instar caterpillar, early in this stage, length: 7.3mm. 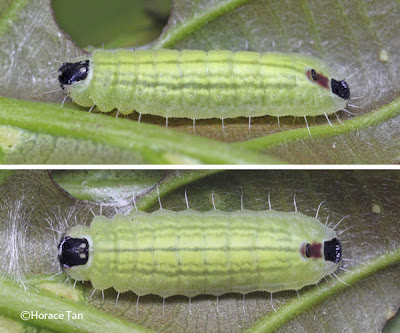 Two views of a 4th instar caterpillar, late in this stage, dormant prior to its moult, length: 9.5mm. 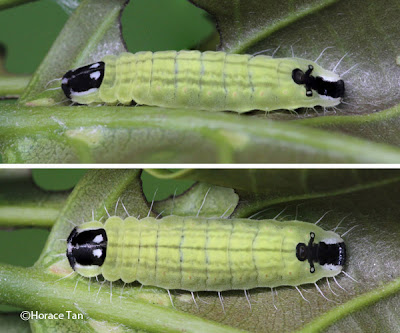 Two views of a 5th instar caterpillar, early in this stage, length: 12mm. 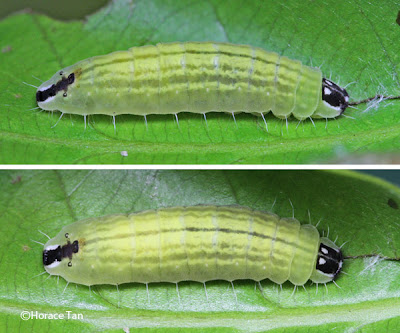 Two views of a 5th instar caterpillar, later in this stage, length: 17mm.

The 5th instar lasts for about 8-9 days and in the last three days of this period, the body of the caterpillar decolorises to a creamy white shade. It continues feeding in this form until the end of the instar. 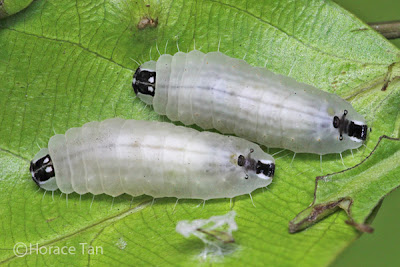 After reaching a length of about 18mm, the caterpillar slows down and stops food intake for about 1 day. During this time, its body length gradually shortened. Soon it becomes an immobile pre-pupa in its leaf shelter. 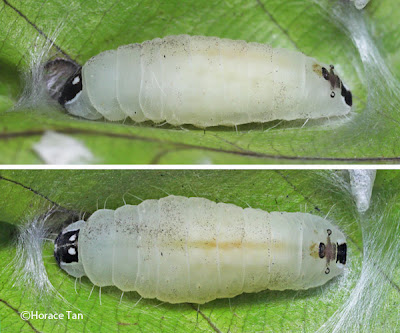 Two views of a pre-pupa of the Aberrant Oakblue in its shallow leaf shelter.

The pre-pupa caterpillar prepares for pupation by spinning a silk girdle and a silk pad to which it attaches via claspers at its posterior segments. After 1-1.5 day as a immobile pre-pupa, pupation takes place. The pupa, with a length of 11-12mm, has a shape typical of any Lycaenid species, but with a somewhat produced anal segment. It is creamy white in coloration. A small reddish-brown slit, likely the remnant of the DNO, has been found to exude fluid droplets for the first few days of the pupal period. This attracts the ants to attend to the pupa, thus securing some degree of protection from predators or parasitoids.

An Aberrant Oakblue caterpillar molts to become a pupa. 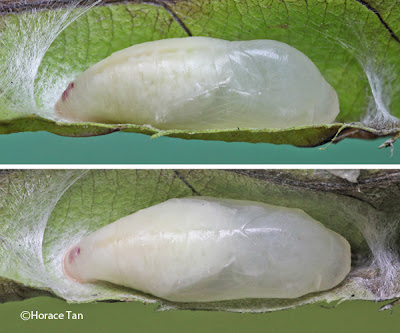 Two views of a pupa of the Aberrant Oakblue, length: 12mm.
. 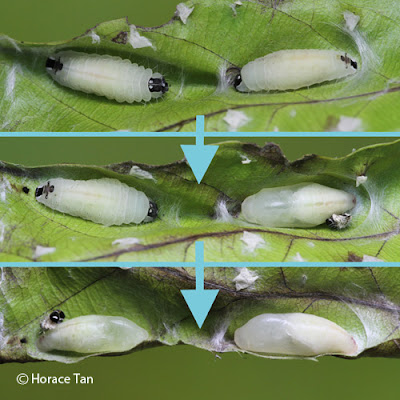 A sequence showing two caterpillars in various stages of pupation in adjacent sites on the same leaf.
Seven to eight days later, the pupa matures enough to show the shining blue patch on the forewing upperside. The next day, the pupal stage comes to an end with the emergence of the adult butterfly. 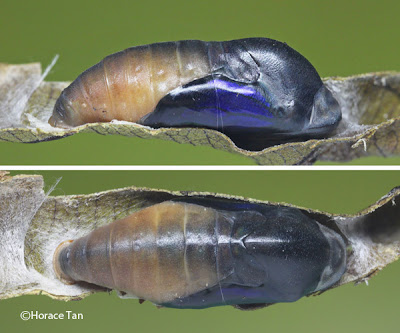 Two views of and instar caterpillar, early in this stage, length: 2.5mm. 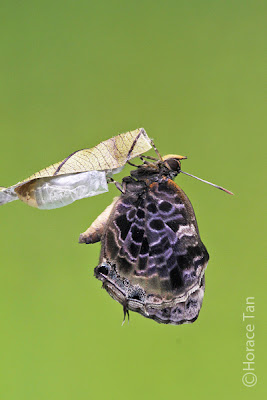 A newly eclosed Aberrant Oakblue drying its wings near its empty pupal case.

Unlike most of the Lycaenidae species, the caterpillars of the Aberrant Oakblue have the habit of constructing leaf shelters in which they rest and seek safety between feeds on the lamina of nearby leaves and part of the shelter. Pupation also takes place within a leaf shelter. 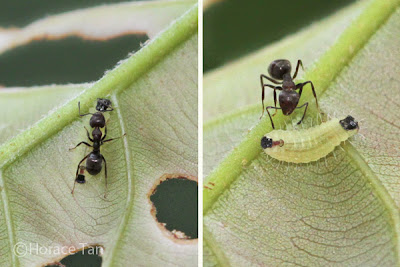 Two views of a 3rd instar caterpillar of the Aberrant Oakblue receiving the attention of an ant. 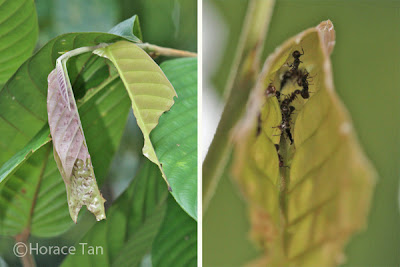 A leaf shelter found in the field. Partly opened in the right panel to show the 5th instar caterpillar and attending ants.
Can you spot the caterpillar?