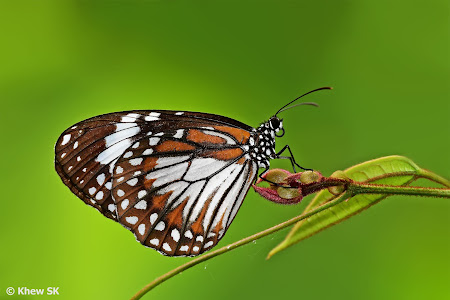 A new discovery to Singapore, the Swamp Tiger


Our Saturday morning outing to Ubin started rather gloomily. The weather, that is. Even at breakfast before the boat ride over to Pulau Ubin, the skies looked threatening and the forecast predicted rain in the late morning and early afternoon. But not to disappoint our two newbies in the group, we decided to take the risk and headed off to our favourite biodiversity-rich idyllic island. 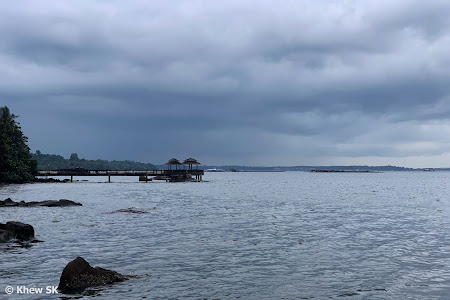 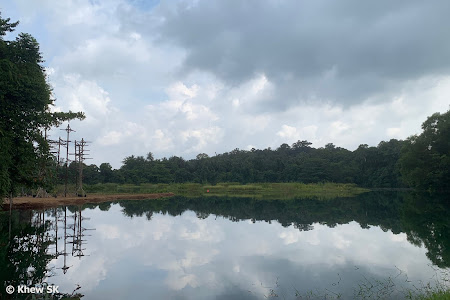 View to Pekan Quarry from Butterfly Hill - dark clouds above!


Perhaps it was due to the weather, but at least there wasn't a long queue at the ferry terminal and we made it to our boat ride after a short wait. We headed straight to Butterfly Hill, as it did not look as though the weather would stay rain-free for too long. Butterfly activity was low, and we did not see too many of the familiar species that usually roam freely on Butterfly Hill. 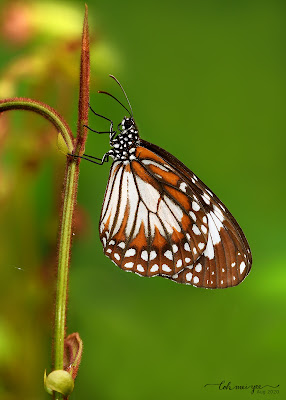 At the Leea shrubs, I spotted something that initially looked like a Black Veined Tiger, but it looked strange. It flew away before I could take a shot of it, and I thought that it looked like something that I had seen many years ago up north in Malaysia, but I left it as another unsolved mystery as it disappeared over the tree tops and out of sight. 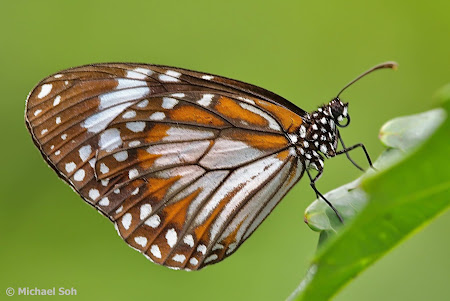 The female Swamp Tiger perches on a leaf


The group went chasing after another new species that was recently re-discovered on Ubin, the Orange Gull (Cepora iudith malaya). Our newbie butterfly shooter, Gavin, had spotted something different, and called out to the rest to wait for the elusive butterfly to come down lower for a better shot. It appeared that there was more than one individual of the Orange Gull, and the overcast weather appeared to make it more lethargic than usual, and it stopped to rest more often. 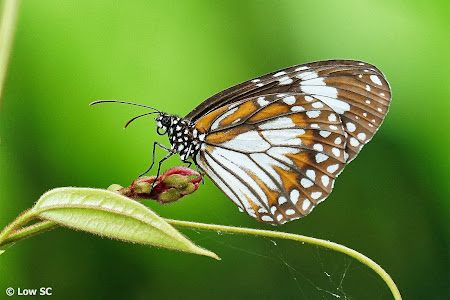 We then met our prolific butterfly shooter, Michael Soh, who was, coincidentally one of those who shot the Orange Gull some months back, also on Ubin. Our "butterfly whisperer" who has been discovering rather interesting and rare species, I saw Michael shooting something amongst the bushes and joined him. It was then I instantly recalled the Danainae that I had seen earlier in the morning. This time, it was perched on a vine and readily recognisable as the Swamp Tiger (Danaus affinis malayanus)! 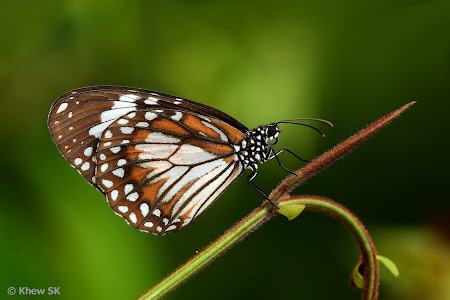 The Swamp Tiger (sometimes also called the Mangrove Tiger or Malay Tiger) is very restricted in distribution, and is limited to coastal areas and associated with mangrove swamps where its caterpillar host plant, a milkweed vine, Ischnostemma selangorica grows. The nature park at Kuala Selangor in Malaysia (which is more well known for its fireflies), is the place to go to see this species. There are a few other locations in Malaysia where it may be locally common, primarily near mangrove habitats. It has not been recorded from Singapore before. 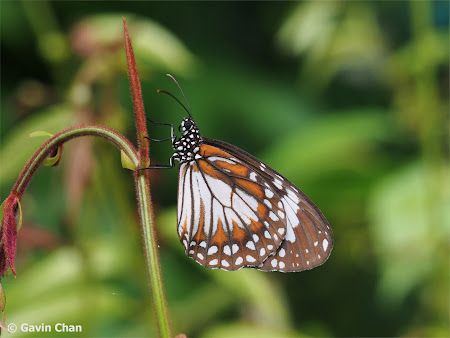 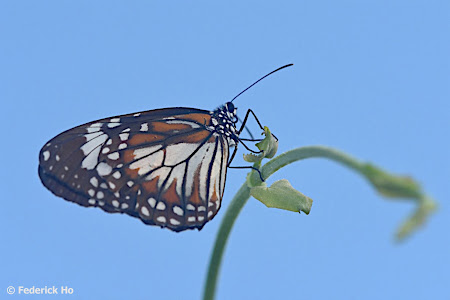 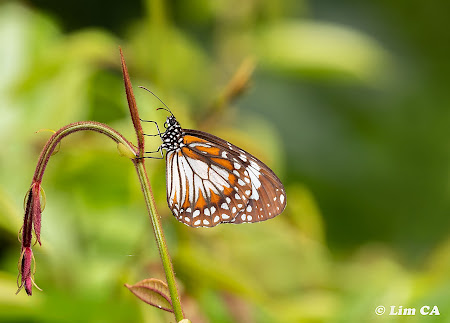 The Swamp Tiger superficially resembles the Common Tiger and Black Veined Tiger of the same genus, but is generally smaller in size. It is readily distinguished by the dark orange wedge-shaped post-discal spots on the underside of the hindwing, giving it a different appearance from its other two cousins. Where it is found in Malaysia, the species is rather fast-flying and alert, and usually staying close to the ground, feeding on flowering plants like Sea Ox-Eye and Indian Camphor Weed. 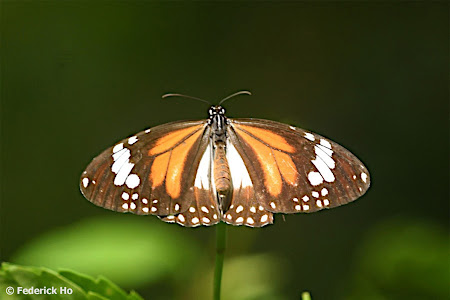 A upperside shot of the Swamp Tiger 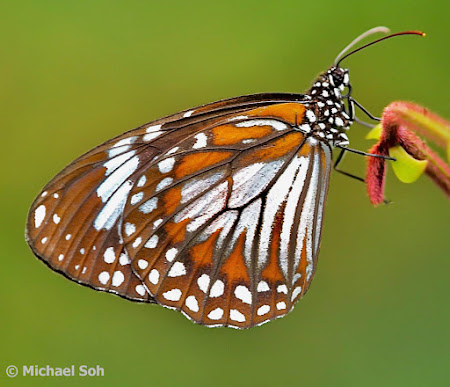 The Swamp Tiger that we spotted today was a female, and was earlier feeding at almost tree-top level, on the flowers of the Bandicoot Berry (Leea indica). It somehow came down to rest with its wings folded, and perched for a while before flying up and disappearing over the treetops again. A chance shot showing the side profile of the abdomen of this female indicated that she is likely carrying eggs. Hopefully, she is able to find a suitable host plant to lay her eggs on. 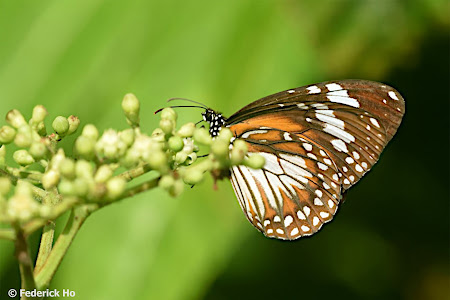 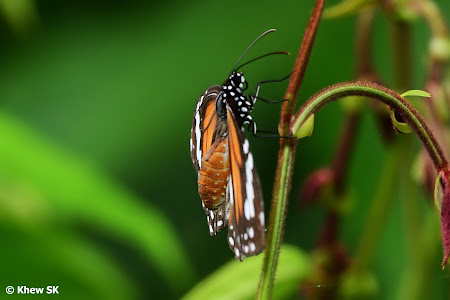 The rather large abdomen on this female Swamp Tiger suggests fertile eggs that will hopefully yield a next generation of this species on Ubin?

It is not often that we get to add one of the larger and conspicuous species of butterflies to our Singapore Butterfly checklist. The Swamp Tiger we spotted today, was probably a stray from somewhere in the mangroves of Johor, but we hope that with better conservation of the nature areas in Singapore, there will be an opportunity for more species from neighbouring countries to colonise and breed successfully. 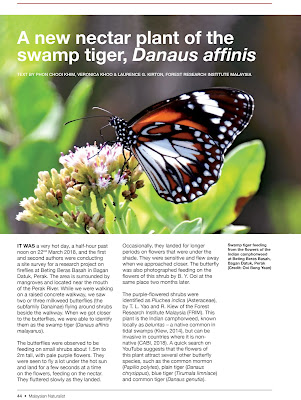 The National Parks Board's nature conservation initiatives on Pulau Ubin, with an objective of enhancing Singapore's biodiversity is reaping some success with the appearance of interesting species like the Angled Castor, Common Jay, Orange Gull, Yellow Streak Darter, Wanderer and many more. And today, we welcome one more species to Singapore - the Swamp Tiger!

Posted by Commander at 4:32 PM

Saw them in Brisbane Noosa board walk area about one and half years ago.

Happy to see them here. Thank you for sharing.