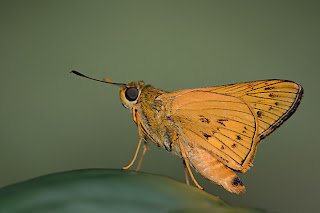 The Plain Palm Dart is one of two species of the genus Cephrenes found in Singapore. The other one, the Yellow Palm Dart, is an immigrant from the Indo-Australian region. The existence of the Plain Palm Dart was probably overlooked as the male of the species appear very similar to the lookalike Telicota spp. The Plain Palm Dart was added to the checklist as as re-discovery only when the very distinctive female was reliably seen and photographed in Singapore. (See life history article)
The male Plain Palm Dart, with is sharper arrow-like markings on the undersides of its wings, sets is apart from the closely allied Telicota. This individual, shot by ButterflyCircle member Federick Ho, perches in the usual skipper fashion, with its forelegs drawn tightly against its body, and resting only on its mid- and hind legs. Only moderately rare, the Plain Palm Dart is widespread in distribution in Singapore and can be found in urban parks and gardens, mangrove areas and also on the offshore island of Pulau Ubin.