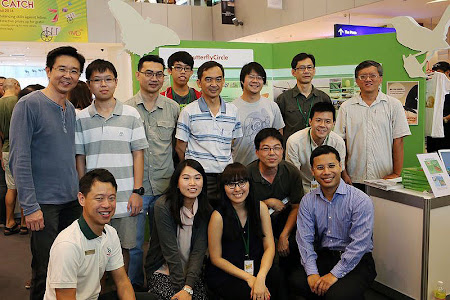 
This year, the 3rd Festival of Biodiversity returned to VivoCity mall after last year's well-visited event, also held at Singapore's largest shopping mall. Occupying a larger footprint than the previous year's FOB, the 2014 festival promised to be an even bigger showcase of Singapore's rich and diverse biodiversity. 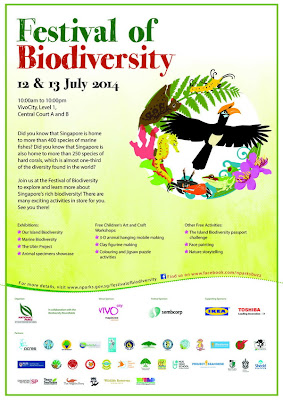 With all the participating members of the Biodiversity Roundtable and several new groups added, each partner group had an individual booth exhibiting its members' work and featuring its contributions and playing its part in the showcasing and conservation efforts of Singapore's biodiversity. 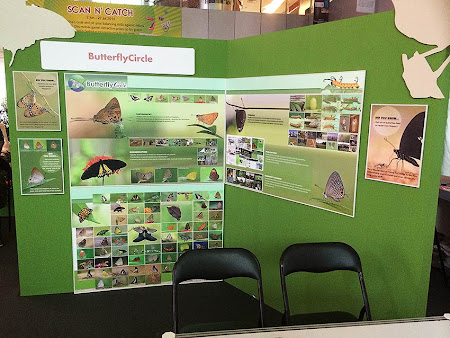 ButterflyCircle's booth at the FOB2014


This year, ButterflyCircle decided to do a collage of our members' work on three large A0 boards, which also described the objectives of the group and its activities. There were also smaller boards that provided additional snippets of information about Singapore's butterflies. The work of collating the photos and putting together the boards was again ably done by our enthusiastic lady member, Huang CJ, assisted by the intrepid twins, Mark and Anthony. Once again, CJ has to be congratulated for assembling the awesome presentation boards that was informative, educational as well as pleasing to the eye. 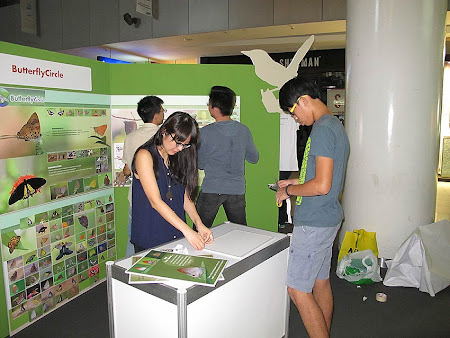 ButterflyCircle early-bird members helping to set up the booth


The day started very early at 7:15am when ButterflyCircle members CJ, Eng Chuan, Anthony, Jerome and me reached VivoCity. The booths had already been set up the night before, and everything was ready to receive the boards. After a quick discussion the group set about Velcro-ing the boards and sticking them up on the panels. It was efficiently put up and many hands made light work of setting up our booth. Everyone had a sumptuous breakfast at Yakun Kaya Toast after that! 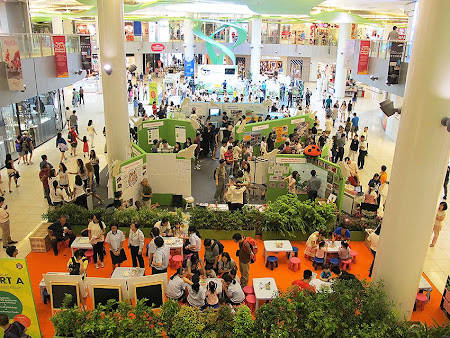 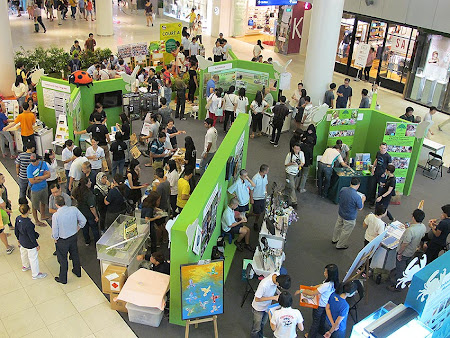 Views of FOB 2014 at VivoCity mall 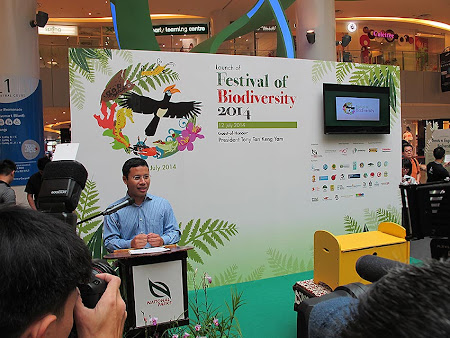 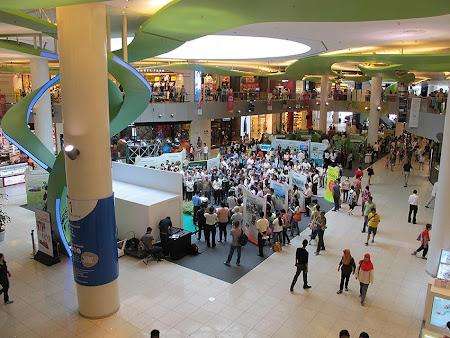 At about 11am, the Guest of Honour, President Tony Tan arrived, and was greeted by members of the biodiversity community. The Master of Ceremonies welcomed everyone and invited the Minister of State for National Development, Mr Desmond Lee to deliver his opening address. This year, the highlight of the FOB was the announcement that Singapore will establish its first ever marine park! The Sisters' Islands Marine Park, which will span about 40 hectares around Sisters' Islands and along the western reefs of both St John's Island and Pulau Tekukor, will serve as a platform for outreach, educational, conservation and research activities related to our native marine biodiversity. 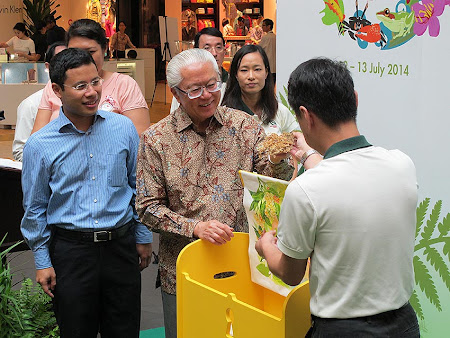 President Tony Tan then launched the FOB 2014 by unveiling a treasure chest of nature wonders containing seedlings and various specimens representing Singapore's biodiversity. The President then toured the exhibits and visited various NGOs and partners' booths. 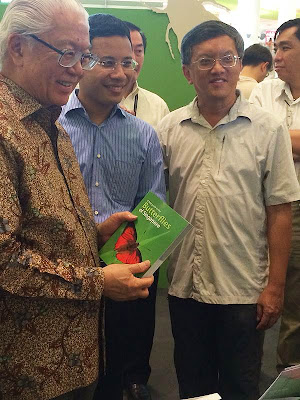 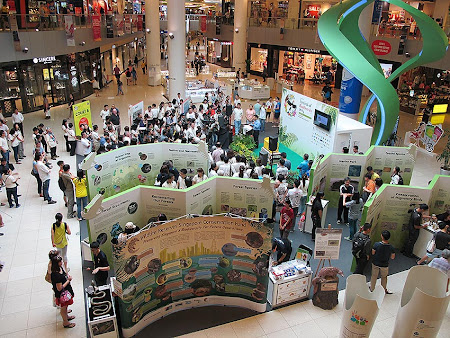 Our Minister of State, Mr Desmond Lee, and the CEO of NParks, Mr Kenneth Er, also visited our booth and gamely posed for a group photograph with ButterflyCircle members. Thank you, Desmond and Kenneth, for your support and appreciation of ButterflyCircle's efforts! 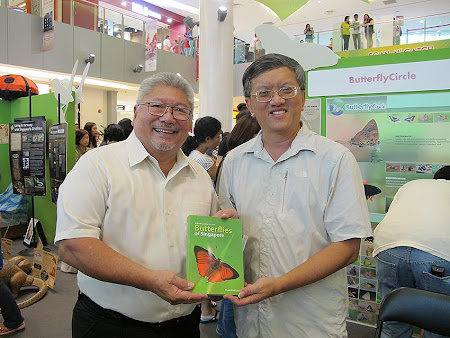 A mug-shot for the album - CEO/Gardens by the Bay, Dr Tan Wee Kiat and me

The rest of the day was a flurry of activities as members of the public visited our booth and asked questions about butterflies. We had our Field Guide for sale to members of the public and we also took the opportunity to sell Dr Laurence Kirton's recently-launched Butterflies of Peninsular Malaysia, Singapore and Thailand. Dr Tan Wee Kiat, the CEO of Gardens by the Bay, picked up two copies of our field guide too! Thanks, Dr Tan. :) 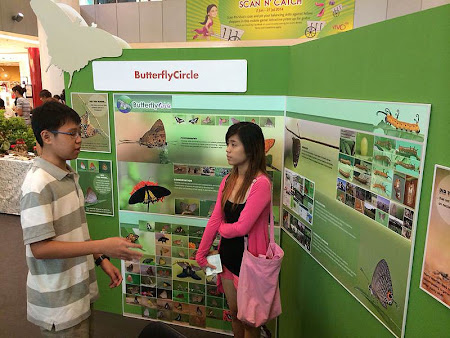 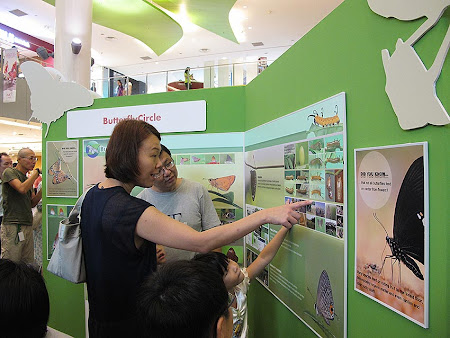 It was an interesting and tiring first day of the FOB 2014, as we met old friends and made new ones, with every one having a common appreciation and respect of Singapore's awesome biodiversity. For those who have yet to visit the FOB 2014, do come to VivoCity tomorrow (Sunday 13 Jul) and experience for yourself, the amazing biodiversity that can be found on our little red dot!