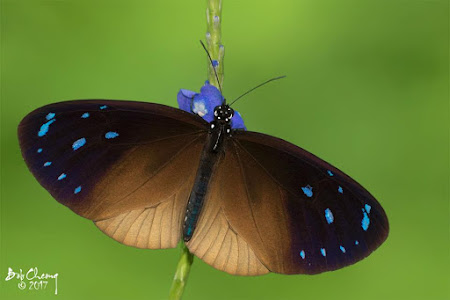 A male Dwarf Crow feeding on the flower of the Snakeweed


I was reading up on one of the "Crow" species of butterflies - The Blue Branded King Crow (Euploea eunice leucogonis) recently. This medium-sized "Crow", listed as extant in Singapore in the Butterflies of the Malay Peninsula 4th Edition, has not been seen in Singapore since the 1990's. One of the observations made in C&P4 was "It is erratic in appearance; it may be abundant in a locality for a few months and then disappear completely for a year or two before reappearing and becoming as common as before." 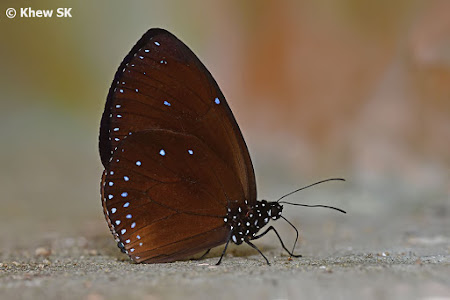 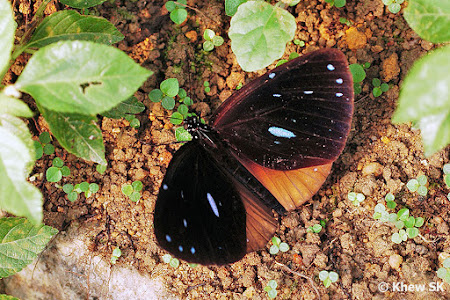 The closely-related Blue Branded King Crow - looks similar to the Dwarf Crow, but much larger in size.  On the upperside forewing, there is a prominent blue "brand".  This species, although recorded as extant in Singapore, has not been seen on the island for over 40 years.
The Blue Branded King Crow is "suggestive of E. tulliolus, but is much larger." (C&P4 page 116). This related species, the Dwarf Crow (Euploea tullioulus ledereri) was re-discovered on the offshore island of Pulau Ubin back in 2002. Similar in appearance to the Blue Branded King Crow, it appears to display the seasonality characteristics as observed in the book. 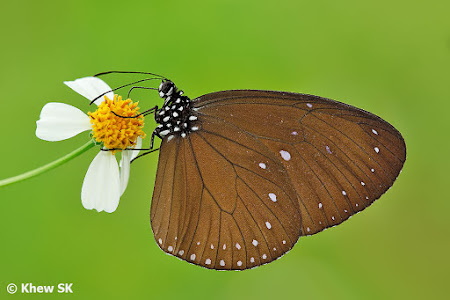 A Dwarf Crow feeding on the flower of the Spanish Needle


The seasonal appearance and re-appearance (but not necessarily annually) of the Dwarf Crow on Pulau Ubin, where it is most regularly seen, is of noteworthy mention. After it was first observed and recorded in the Singapore Checklist, its appearance on Pulau Ubin has been erratic. There were some years where the species completely disappeared from the island, only to re-appear many months later and become common again. 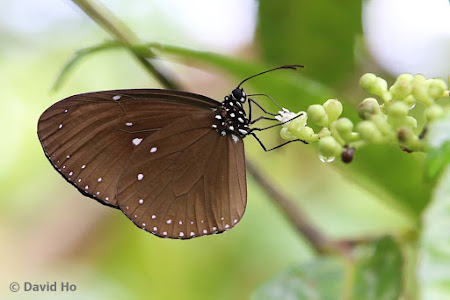 A Dwarf Crow feeding on the flower of the Bandicoot Berry 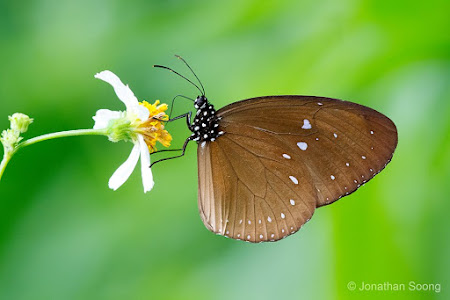 Recently, in the later months of 2017 and in January and February 2018, the Dwarf Crow has become common again on Pulau Ubin, and particularly at the Butterfly Hill, where it is frequently spotted. On one outing, I counted at least 6-8 individuals feeding at the flowering plants - particularly on the flowers of the Spanish Needle (Bidens alba). The species also feeds on several other nectaring plants and does not appear to be too fussy or have fixed preferences on where they get their nectar from. 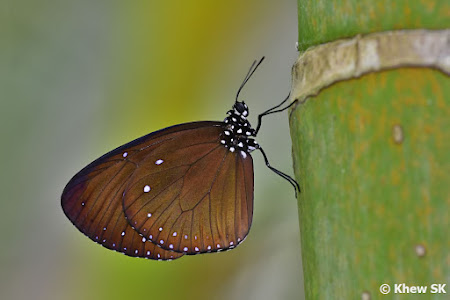 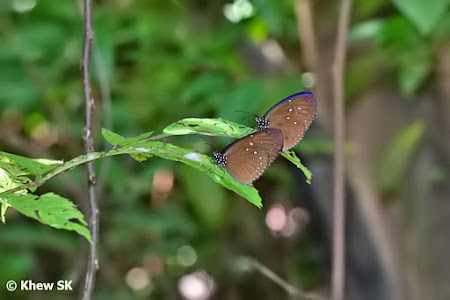 After feeding in the morning hours, Dwarf Crows tend to hide in the forest shade, perched on leaves, branches or twigs to rest in the afternoon
In the later hours of the day, after noon and having done all their feeding, they will take shelter in the shaded areas to rest. They will stay still on their perches, unless disturbed by movement, whereby they will take off and look for another perch to rest. This behaviour is quite typical of several Danainae species. 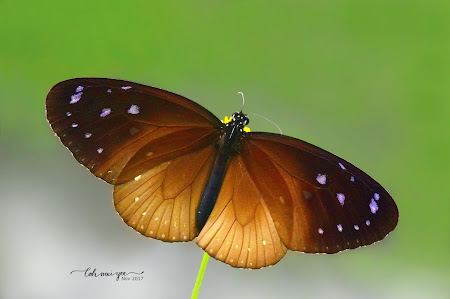 A female Dwarf Crow showing the upperside of its wings


The Dwarf Crow is the smallest member of the genus Euploea. The wings are reddish-brown with the apical portion of the upperside of the forewing a deep blue. There are a number of bluish or whitish discal and sub-marginal spots on the forewing. The hindwing is unmarked in the male and the tornal area is lighter. In the female, the hindwing has a series of submarginal diffused whitish spots. 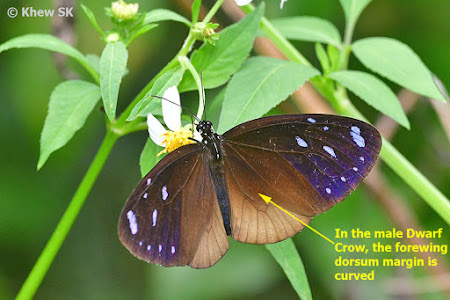 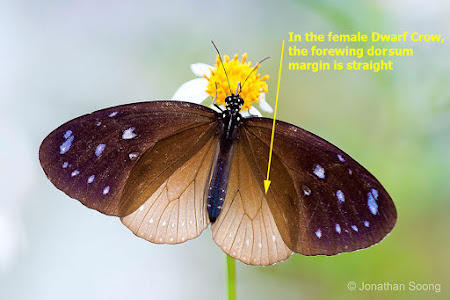 
The dorsal margin of the male is bowed or curved whilst it is straight in the female. On the underside, both sexes are almost indistinguishable with the usual whitish marginal and submarginal spots on both wings. The underside of both wings is a dull matt brown. 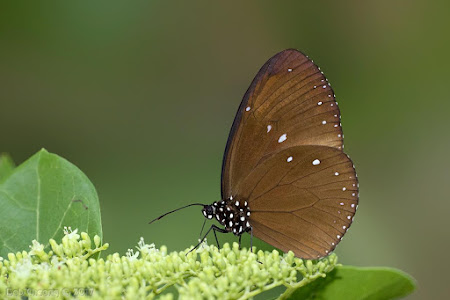 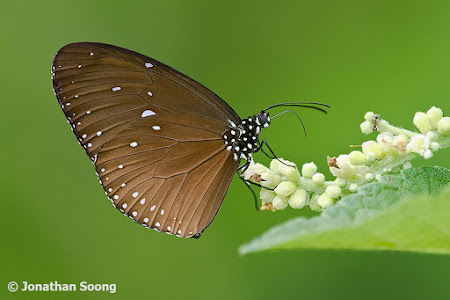 The Dwarf Crow flies in an unhurried manner, moving from flower to flower to feed. It then clutches on the flower head whilst its proboscis probes deep into the flower to gain access to the nectar within. Like all the related species in the Euploea genus, the Dwarf Crow is also believed to be distasteful to birds. 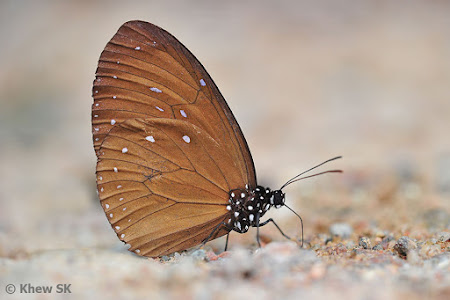 A Dwarf Crow puddling at a sandy footpath


Occasionally, the Dwarf Crow can be seen puddling at damp footpaths and muddy areas that have been tainted with animal urine or other minerals. It will come back to its favourite spot again and again even after being disturbed. 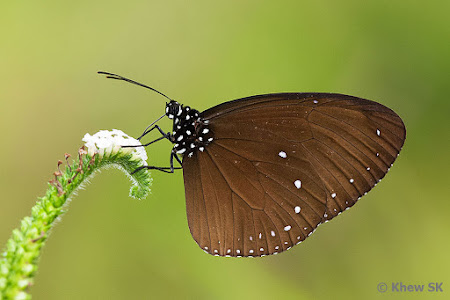 A Dwarf Crow feeding on the flowers of the Indian Heliotrope


The caterpillar has been described as dark violet brown with faint pale and dark transverse stripes along its body and the dorsal stripes are yellowish white. The filaments are violet brown. We have not been able to find the early stages of this species in Singapore thus far. The caterpillar host plants are believed to be Mikania cordata and Malaisia scandens. (Ref : C&P4 and Fleming) 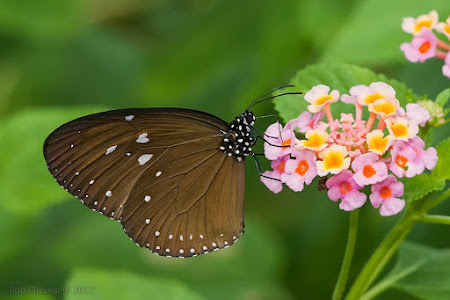 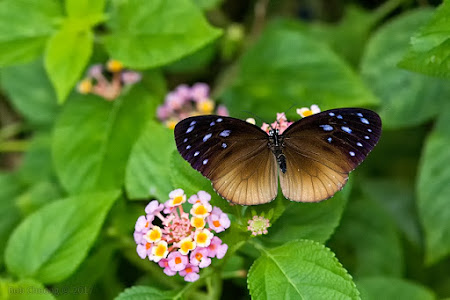 A Dwarf Crow feeding at the flowers of the Prickly Lantana


Like its close cousin, the Blue Banded King Crow, the erratic appearance of the Dwarf Crow is still a mystery. Where does the species disappear to, in the years when it is absent from Pulau Ubin? Does this have something to do with the abundance (or lack of) its caterpillar host plants? When it reappears, why does it become common again? What causes it to disappear again? 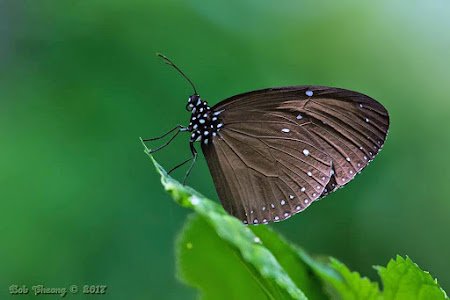 These are questions that have yet to be answered, as we continue to observe the behaviour of the Dwarf Crow. In the meantime, for the photographers who are keen to record this species for their digital collection, do visit Pulau Ubin to get your fill of the Dwarf Crow before it disappears again. Who knows how many years will pass, before it re-appears and becomes common again?
Text by Khew SK : Photos by Bob Cheong, David Ho, Khew SK, Loh MY and Jonathan Soong.

Posted by Commander at 5:23 PM 0 comments