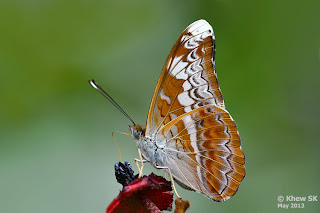 
This pristine male Knight (identified by its white wingtips) was feeding on the ripened fruits of the Singapore Rhododendron when I managed to take a number of shots of it with its wings folded upright. Although skittish, it has a weaker flight than the more alert Commander but has the same habit of perching on the top surface of a leaf, just out of reach of the photographer's lens.