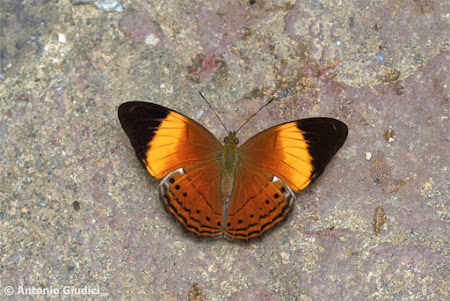 A Banded Yeoman puddling on the ground


Just over a week ago, the Republic of Singapore celebrated its 53rd birthday on 9 Aug 2018 - 53 years of independence after it broke away from Malaysia in 1965. Back then, post-separation, Singapore was not expected to survive long on its own. A small island nation of only 580 sq km in 1965, it had no natural resources, a resident population of about 1.9m people, scant financial resources, virtually no army and a host of political and internal security issues to deal with. 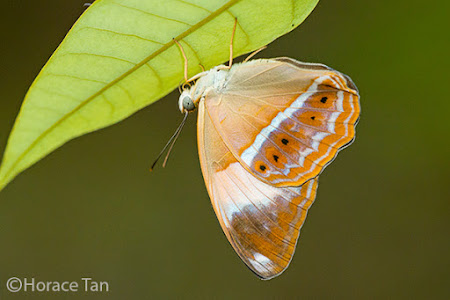 In just over five decades, the little country punched well above its weight, grew its economy and physical size - it has a land area of about 720 sq km today, physically expanding, through reclamation, by nearly 25% since 1965. Today, Singapore ranks amongst the top 10 countries in terms of Gross Domestic Product per capita according to the International Monetary Fund. 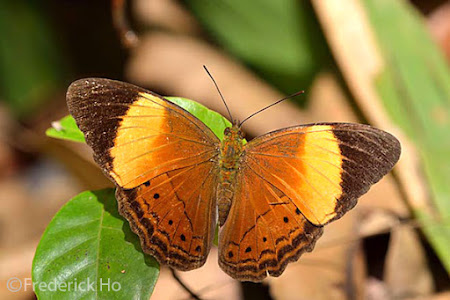 A Banded Yeoman sunbathes with its wings opened flat

Looking forward, stormy skies loom ahead. Singapore's past successes cannot be taken for granted, as the nation struggles with high cost of living, a more demanding and vocal citizenry and business competition from other emerging economies in the region. However, Singapore still has a number of things going for it, and it has to leverage on these pluses to leap ahead in the coming decades. This is where the government is focusing on, to re-invent Singapore and restructure the economy in the face of uncertain and rapid-changing global environment. 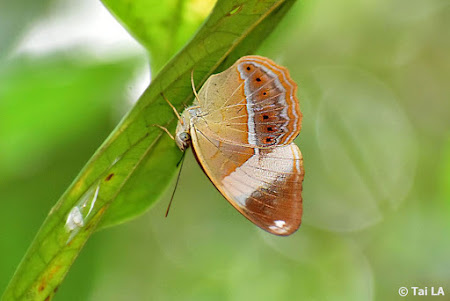 It is also in August that the Chinese Hungry Ghost month (7th month of the Lunar Calendar) starts. An annual Chinese tradition for the spirits of the afterlife, there are many do's and don't's that have been passed from generation to generation. The Hungry Ghost Month is, generally speaking, a bad time to do anything. Many significant milestones are avoided at this time, as people believe it's simply bad luck - from renovations, to moving house or buying an apartment, to getting married. 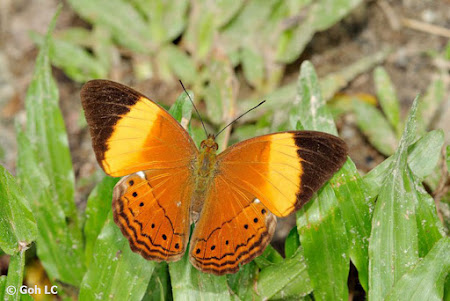 One of the interesting no-no's is "killing a moth" (or a butterfly for that matter). The Chinese believe that spirits are reincarnated as insects, especially moths. And the souls of the dear departed are in the moths (and butterflies) that visit your homes in the wee hours of the night. So stay away from killing any moths and butterflies during the month, lest it is the soul of a loved one visiting you! 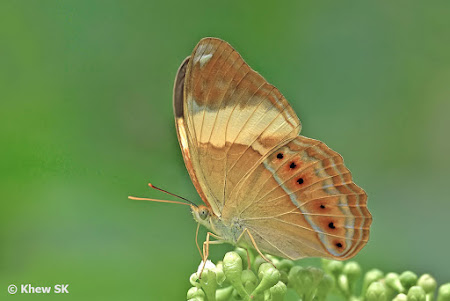 Our feature Butterfly of the Month for August 2018 is the Banded Yeoman (Cirrochroa orissa orissa). This is a moderately rare species in Singapore and is forest-dependent. It is rather local in distribution, and regularly sighted at its favourite sites in the Central Catchment Nature Reserves where its caterpillar host plant, Ryparosa scortechinii, grows. 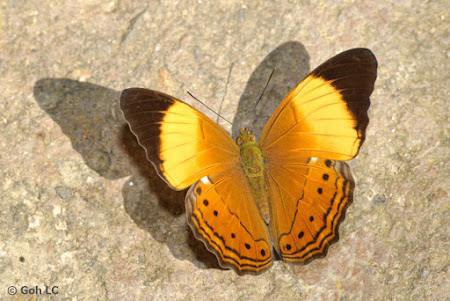 The Banded Yeoman is ochreous brown on the upperside of its forewing, with a yellow post-discal band and a black apical border. The hindwing is also ochreous brown above with a series of marginal and sub-marginal lines and black spots that is typical of species of the genus Cirrochroa (collectively called the Yeoman butterflies). 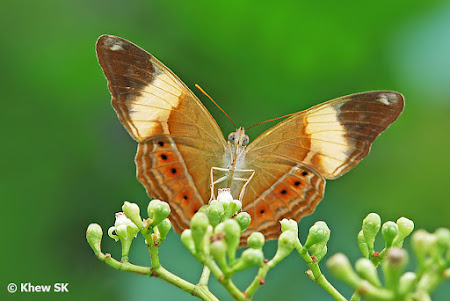 The underside is much paler, and generally reflects the patterns and markings on the upperside. The broad apical area on the forewing has two white apical spots. The post-discal silvery band is a diagnostic feature to separate the species in the genus. In flight, the Banded Yeoman resembles another species that flies in Singapore - the Rustic. Indeed, both species are often seen together when feeding at flowering plants like the Bandicoot Berry (Leea indica) along forest paths. 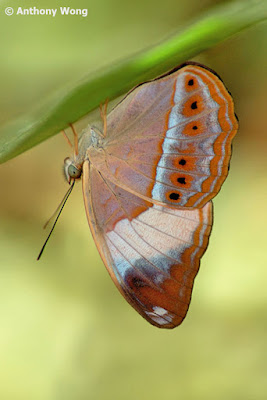 The Banded Yeoman is skittish and is always on the move. It has a habit of flying and hiding on the underside of leaves with its wings folded upright. The species is relatively more common in Malaysia, often seen in secondary forests and nature parks, where several individuals can be observed together. 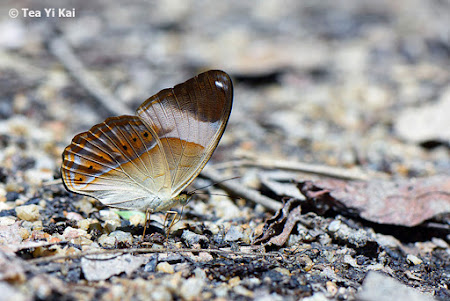 A Banded Yeoman puddling on a damp footpath

The species is also often observed to puddle at muddy footpaths near forest streams. Even when puddling, it has a habit of opening and closing its wings as it twists and turns whilst probing its proboscis in search of nutrients in the damp mud or sand. 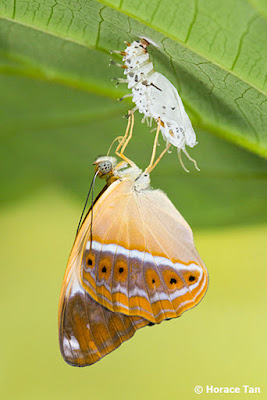 A newly eclosed Banded Yeoman clinging on to its pupal case

The caterpillar has been successfully bred on the forest plant Ryparosa scortechinii in Singapore. The host plant is uncommon and is primarily found in the forested nature reserves of Singapore. At certain hours of the day, the Banded Yeoman can be observed to sunbathe on the tops of leaves and opening its wings flat to capture the heat of the sun. 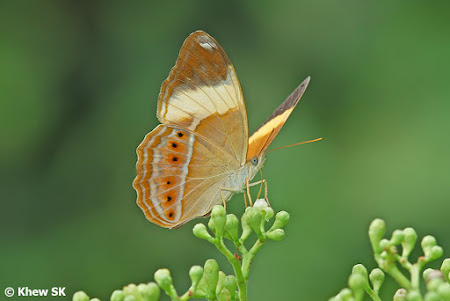 Interestingly, this is the 888th article to be posted on this blog, as we feature our Butterfly of the Month today at exactly 18:08 on 18/08/18. That's a lot of auspicious 8's and will hopefully bring everyone lots of luck for the remaining months of this year!

Posted by Commander at 6:08 PM 0 comments